Though it's been going on for years in the American South, the concept of a "Hell House" remains completely unknown to most of the world. Cleverly designed to lure in patrons expecting a traditional haunted house, these evangelical spectacles use melodramatic depictions of various sins and their consequences to depict 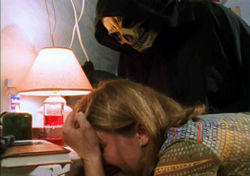 the dangers of going to hell, with a tiny taste of heaven shown at the end to reward those who stay on the moral path. Not surprisingly, this extreme approach has come under fire even from within the religious community, and Hell House offers one example of how much work and drama goes into the creation of these sociological and horrifically gory curiosities.

The Trinity Assembly of God Church in Texas prepares for its next Hell House, which entails extensive casting calls, music design, art direction, and community promotion. Through extensive documentary footage we meet the various teen actors (recruited from within Trinity's private school), eager to act out the gruesome drama of botched abortions, rape, classroom shootings, drug deals gone wrong, and AIDS-related deaths. On the surface it all seems sordid and tasteless enough to make John Waters seem restrained, but the religious angle makes it a far trickier pill to swallow. Staggered throughout the film are testimonials and anecdotes from participants both present and past, putting a continuous human face on this group effort to make the world a holier place. 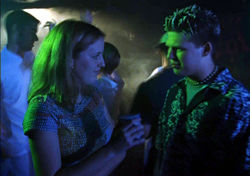 The fact that the church allowed an outside documentarian to chronicle the creation of a Hell House without any restrictions is quite remarkable, and the result is a surprisingly impartial, God's-eye view of the proceedings leading up to the house itself, where the tableux themselves and the behind-the-scenes drama receive equal screen time. Attendees react with an understandable mixture of shock and amazement at the combination of sermonizing, histronic non-acting, and tacky bloodshed, while an outraged band of youths outside provides the film with its single most charged moment. Not surprisingly, the result is highly compelling and extremely well-constructed; regardless of one's religious views, this is recommended viewing and a valuable peek into the one of the more extreme corners of the American heartland.

A film festival and TV favorite, Hell House has been brought to DVD in a glossy package complete with a beautiful transfer of the film itself. Presented in its original full frame aspect ratio, the image quality is excellent with stable colors and only some mild grain in the darker scenes near the end. The disc is outfitted with some valuable extras, including a 1999 short by director George Ratliff used to obtain financing for the Hell House feature. Entitled "The Devil Made Me Do It," this short takes a similarly detached stance while chronicling Trinity's controversial decision to include a recreation of the Columbine massacre in one of its Hell Houses, resulting in a local uproar. The Columbine skit is shown in all its jaw-dropping entirety and is perhaps the single most shocking thing on this disc; no wonder financiers were willing to fund an even longer case study. Also included are the theatrical trailer, a deleted sequence involving a discussion of demons, Trinity's "awards" ceremony to honor the Hell House participants, and a radio broadcast from This American Life detailing the film itself and offering a quick history of the Hell House phenomenon.