Even in the ever-growing realm of shock animation, Happy Tree Friends is the sort of warped concoction that manages to make even jaded viewers stop in their tracks. Sort of a more unhinged cousin to the likes of South Park, Ren & Stimpy and "The Itchy and Scratchy Show," this gore-drenched collection of vignettes would seem horribly diseased if it weren't so achingly funny. 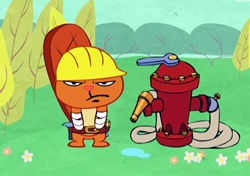 The first volume (appropriately subtitled "First Blood") contains a main program of 14 episodes, each running about a minute and a half each. Each skit begins with the horrifyingly catchy theme song and opens with a collection of cute, fuzzy animal characters jabbering in cartoonspeak, then embarking on a seemingly innocent activity which invariably results in graphic carnage and dismemberment. Characters include Handy (a beaver missing his two front paws), Flippy (a Vietnam-traumatized critter prone to gory games of hide and seek), Sniffles (an aardvark who suffers a particularly heinous fate at the hands of some vengeance-driven ants), Lumpy (a stupid and oft-abused moose), and Disco Bear (who consigns his unwilling dance partners to a gory end). Standout episodes include "Spin Fun Knowing You" (in which a merry-go-round romp turns deadly), "Treasure These Idol Moments" (a Brady Bunch-inspired bit in which a cursed idol decimates the entire cast), "Nuttin' but the Tooth" (dental surgery gone horribly wrong), and "House Warming" (Handy's finest moment). 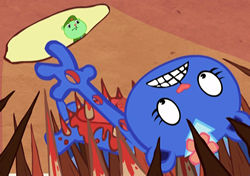 But that's not all, kids! You also get a new pirate character introduced in the previously unseen episodes, "Whose Line Is It Anyway," along with a silly pop-up video version of "Spin Fun," a character gallery done trading card-style with amusingly banal "fun facts," an earlier short from the same creators, and a gallery of character designs included numerous unused characters. The twisted minds behind these poisonous goodies appear from a separate commentary edition of the shorts which unspool alongside storyboard versions; it's a party atmosphere all the way with everyone cramming in to get their anecdotes heard. Perhaps the sickest extra of all is a collection of 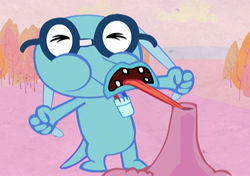 "Smoochies," in which four characters are put into Sim-like survival situations entitled "Original Cuddles," "Valentine's Day," "Happy Easter" and "Party Smoochie." For example, choosing "sleep" for a character results in a barrage of tranquilizer darts turning its head into a pincushion, while "bathe" turns the screen into a deadly flood of water.

Video quality is excellent all around; all of the shorts were originally shown on the Internet as streaming video, but here you can savor every nasty little detail to your heart's content. The surround audio is quite active, allowing that damn theme song to pump out of your speakers. Every hack, squish and spurt also sounds perfectly clear. Bring on volume two!