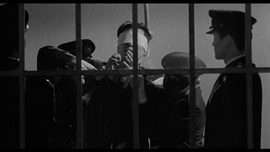 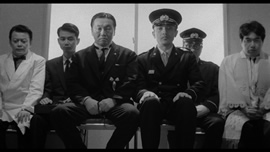 Near the end of the 1960s, iconoclastic filmmaker Nagisa Ôshima was wrapping up an astonishing run of Japanese new wave classics with at least one title per year since his major breakthrough, 1960's Cruel Story of Youth. One of his most abstract and stylized films up to that point, Death by Hanging pulls a plot twist made familiar by numerous film noir titles (such as The Crooked Way) -- a criminal potentially absolved by amnesia -- and gives it a darkly comic, political twist.

In this case the criminal is a Korean immigrant in Japan only referred to as R (Yu), whose execution by hanging is about to begin as the viewer is bombarded with sights and sounds laying out the mechanics of the process. However, the nameless officials are thrown into turmoil when the hanging doesn't kill its target; instead his body seems to resist execution, and they ultimately decide to revive him and determine their next course of action. The warden (Satô) and chaplain (Ishidô) are the primary voices among the disoriented 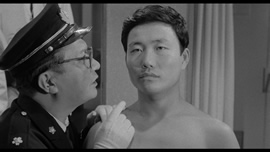 powers that be who have to reenact, distort, and disparage the circumstances leading to the convict's crime, which he now can't remember himself. The growing absurdity of the situation exposes the inherent racism and class bias in the system, with the young man at the center coming to a disturbing and strangely moving realization by the time the film reaches its ironic closing 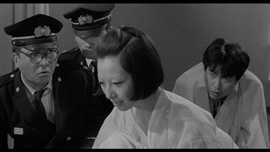 Though the director was quite aware of how to use color expressively, it makes sense that he shot this film in monochrome to highlight the stark, heightened atmosphere, a bit like an absurdist stage play but undeniably cinematic in its sometimes startling shifts in visual perspective (including a pretty amazing overhead hanging shot). All of the actors are excellent, with Satô taking top honors with a role that nicely sits alongside his roles in The Sword of Doom and Kuroneko.

Despite its pedigree, this film didn't reach American audiences until almost three years after its Japanese release with a minor art house release by Grove Press, the controversial offshoot of the notorious publishing company who had recently gone through a major legal battle over I Am Curious (Yellow). As the packaging for the 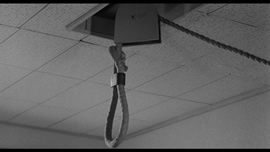 2016 Criterion release (available in separate Blu-ray and DVD editions) explains, the film was shot in a four-perf format similar to VistaVision used in Japan, and that negative was used at the source here for a 4K restoration. The result is very striking with fine but detailed film grain and a very deep, rich appearance, often using light and shadow to impressively immerse the viewer in the limited environment. 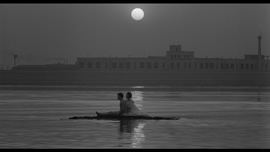 (This would probably play well next to the previous year's Marat/Sade.) The mono LPCM Japanese audio sounds superb as well, with optional English subtitles offered. Ôshima junkies will be happy with the inclusion of his 24-minute 1965 short film, Diary of Yunbogi, an experimental look at a Korean youth's coming of age in the slums (not too hard to see the connection to the main feature here), while the original Japanese theatrical trailer is also included. Some much-needed context is also offered by both a half-hour interview with critic Tony Rayns and an insert booklet featuring a relevant excerpt from the director's 1968 multiple volume work study and a new essay by Howard Hampton, both of which go into much detail about the film's real-life inspiration, convicted Korean murderer and youth cult sensation Chin-u Ri.