Inspired by the pun-happy success of such disparate 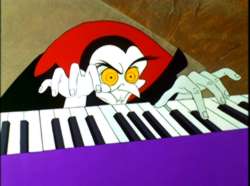 monster-themed efforts as Scooby-Doo, Where Are You?, the hit song "The Monster Mash," and Forry Ackeman's Famous Monsters of Filmland, Filmation's animated Groovie Goolies threw in every horror-movie creation imaginable with a healty dose of Laugh-In-style gags. The results will probably confused modern kids, but '70s pop culture junkies should find a hearty fix in this Saturday morning curiosity.

There's no plot anywhere to speak of, but the show takes turns rotating between a stable of characters at Horrible Hall including the bony-looking Count Drac, the oddly effiminate "Frankie" monster, vampish Bella La Ghostly, and hip-talking teen lycanthrope Wolfie. When not spending time popping in and out of windows and secret passageways to dole out groan-worthy jokes (you could start a deadly drinking game 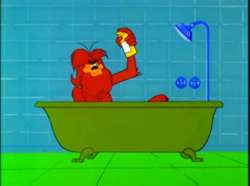 by downing a shot everytime someone says "batty"), they all get together for some prime early-'70s bubblegoom pop songs like "Monster CookbooK," "Super-Ghoul" and the unlikely minor chart hit, "Chick a Boom." Since the show was modeled as a spin-off from The Archies built around the continuing character of Sabrina the Teenage Witch, the style of the music numbers doesn't stray too far off from their inspiration.

The Brentwood-released, three-disc DVD set from Ink & Paint features bright, clean, colorful transfers of 16 episodes from the Goolies' first incarnation (they were later revived for a solo 1975 TV gig); for the record, the episodes are "When I Grow Up," "Population Party," "Lights Out," "Goolie Garden," "MOnster Trio," ""Feed the Ghost Some Garlic," "Frankie," "What's in the Bag," "Goolie Picnic," "Where You Going Little Ghoul," "Gool School," "Save Your Good Lovin' for Me" (featuring the two best songs), "Darlin' Darlin'," "Shadows," "Witches 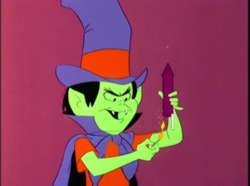 Brew," and "Goolie Swing." Former Filmation workers and experts Darren McNeil and Bob Burns are among the participants on commentary tracks for a pair of episodes, along with producers and writers from the series. For 40 minutes total, they get in a lot of information about the show's genesis and marketing -- which is certainly a higher aspiration than the biggest video supplement, the 45-minute "Goolians: A Docu-Comedy." This weird, fragmented piece features some goofballs researching the show and talking to various fans, including the always welcome Alice Cooper and a Sacramento punk band, the "Groovie Ghoulies." A sing-along version of the main theme features Karaoke-style lyrics for your next Halloween party, and "Creation of Filmation" features an audio interview with producer Lou Scheimer explaining the company's earliest projects during its salad days. The set is rounded out with a hefty image gallery of cells and promotional art, liner notes by Shawn Sheridan (and an uncredited back page of additional facts), and DVD-Rom versions of the original episode scripts (which ain't exactly high-powered reading) and the original "Series Bible" for a proposed spin-off, The Kookie Spookies. As long as you don't plan on devoting an entire attention span, this is a fun diversion for monster buffs looking for some good, clean, brainless cartoon fun.