While cutting edge cinema has long been the terrain of

art house cinemas, no country can lay a claim to stranger art films than Japan. Leading the experimental pack is director Koji Wakamatsu, whose bizarre career spans from the early '60s to the late '90s and threatens to make the work of contemporaries like Seijun Suzuki (Branded to Kill) look almost genteel in comparison. In Go, Go Second Time Virgin (Yuke yuke nidome no shojo), two psychologically battered teenagers meet on a desolate urban rooftop and bare their psychic scars to each other. The boy (Michio Akiyama) feels a mixture of arousal and anguish when he sees the unclothed girl (Mimi Kozakura) following a gang rape on the rooftop, in which he was a partial participant, but their relationship becomes far more devastating and perverse than a forced sexual encounter. He relates how his parents forced him to watch and participate in

group sex, a trauma he eventually curtailed with the aid of a butcher knife. Eventually the boy takes a surprising action against his peers, leading to the inevitable tragic finale.

Though running barely over an hour, Go, Go Second Time Virgin packs a tremendous amount of artistry into every scene. The relentless, downbeat atmosphere will prove tough going for many viewers, as will such bizarre flourishes as alternating the predominantly black and white footage with startling colour inserts (usually for violent moments). Despite the casual, frequent displays of nudity, the film's depiction of sex could hardly be described as erotic; instead, physical contact is presented as a temporary balm to relieve the agony of day to day existence in the big city with families insensitive to the needs of their children. Teen rebellion has never looked so grim. The elements used for this DVD, another in the impressive line of Japanese cult releases from Image and the American Cinematheque,

appear to be in excellent shape and boast a nicely detailed, clean image. The scope photography is well preserved with anamorphic enhancement to wring every last detail out of the print, while the burned in subtitles are easy to read. The disc also includes a shot-on-video interview with Wakamatsu, introduced with some on-the-fly artsy tracking shots, in which he discusses his career and offers some concise remarks about the state of Japanese cinema both past and present. Not for everyone, obviously, but this is a good place to start to learn more about a director who remains almost entirely unknown in the West.

Ecstasy of the Angels (Tenshi No Kokotsu), a jarring exercise in experimental cinema, was also shown as Angelic Orgasm, which should tell you something. While Go, Go features a somewhat linear narrative to couch its more bizarre flights of fancy, this 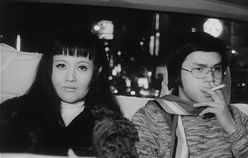 film dispenses with conventional storytelling to plunge into a melange of political dissertations, rough and violent sex, explosions, and swanky nightclubs. A band of military radicals passes its time by hanging out at a club, engaging in sweaty lovemaking, and plotting the infiltration of foreign military bases to obtain weapons. Known only by their code names lifted from days of the week, they become increasingly paranoid when their latest scheme is thwarted by an explosion, leaving them fighting a rival group and ripping each other apart. In the most extended and unpleasantly memorable sequence, a villainous man in sunglasses leading the rival 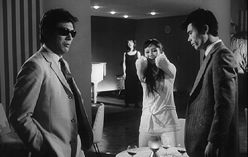 group attempts to learn the whereabouts of a secret arsenal by impaling a woman's thigh with a pencil while her boyfriend is pummeled in the background... and it only goes downhill from there.

Though it certainly looks and feels like an exploitation picture, Ecstasy of the Angels clearly has much more on its mind. The infusion of radical politics into the head-spinning assault of nudity and gore makes for a very odd experience, and the rapid shifts in time, film stock (black and white alternating with colour), sound effects, and character affiliations make this a dense, difficult hour and a half. Many scenes appear to be constructed simply to make the viewer ponder, "What the heck was that, and what is this movie about?" Whenever things threaten to spin completely out of control, however, Wakamatsu manages to throw in another round of sex and violence to hold one's interest before he barrels forward to another downbeat, poetic ending. The film transfer of Ecstasy of the Angels looks just fine given the age and nature of the film; though lacking the visual 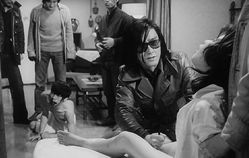 formality of Go, Go Second Time Virgin, the film still contains some stunning cinematography and a surreal, hypnotic editing scheme. The permanent subtitles appear to capture the essence of the dialogue, which comes in erratic bursts, and the mono audio sounds perfectly clear if unspectacular. The disc contains extensive, informative liner notes by the American Cinematheque's Chris D. and a shot-on-video interview with Wakamatsu.