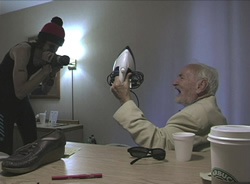 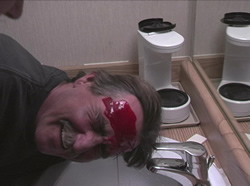 Makes a Movie, a stranger-than-fiction documentary directed by Adam Rifkin, who directed such '90s cable staples as The Dark Backward, The Nutt House, and Detroit Rock City. The subject here is another filmmaker, Giuseppe Andrews, a former child actor (seen in Independence Day and American History X) who returned to his trailer park roots in California to create a one-man movie industry. His productions (with Touch Me in the Morning still probably the best known thanks to distribution by Troma) are shot in two or three days with a meager budget for props, utilizing the colorful cast of characters around him including a motley crew of senior citizens and homeless people. As you'd expect, the results are a far cry from anything churned out by Hollywood with a production process that would make most movie crews run screaming for the hills.

The main focus here is the creation of Garbanzo Gas, which was inspired by Giuseppe's decision to try kicking meat and the digestive consequences of eating too many garbanzo beans. He performs virtually all crew duties including directing, photographing, and editing, with dialogue fed to the actors on the spot while the camera's rolling (and sometimes delivered in mangled form that bests what's written on the page). 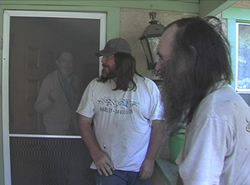 Inspired by Fassbinder's In a Year of 13 Moons, the film is a mad tale about an elderly cow (one of his regular actors, Vietnam Ron, dressed in a cow suit), who hops in a cab for a break from the slaughterhouse and winds up tangling with a bizarre cast of characters at a hotel. With lines like the indelible "I'm gonna whong my whoppty doo on your nipple chunks," you should have some idea of what to expect.

What's fascinating here is how the lo-fi, DIY approach 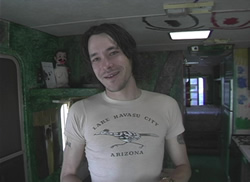 actually melds with Giuseppe's love for oddball cinema; what seems like a free for all on the set manages to coalesce into a crazed, compelling piece of entertainment in its finished form thanks to what appears to be spontaneous editing going on in his head and dialogue that turns into a kind of vulgar, hypnotic beat poetry. It's a cinematic love letter of a totally different kind and a spotlight on a kind of artistic expression as far from the mainstream in America as you can get. Don't be surprised if you're itching to watch some of his films as soon as it's over.

Cinelicious Pics brings this doc to Blu-ray (with no DVD counterpart as of this writing) in a stacked two-disc edition loaded with extras. The feature itself is obviously dependent on the source material, shot digitally at 1.33:1 and varying depending on the natural lighting conditions and the injections of other source material along the way including snippets of Giuseppe's earlier projects shot on consumer video equipment. This is probably as good as it could possibly look, and the audio is likewise at the mercy of the often raw audio conditions during the making of the project. 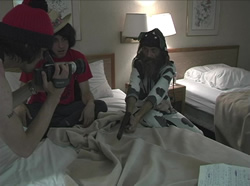 an audio commentary for the feature with Rifkin and producer Mike Plante elaborating tremendously about the conditions of Giuseppe's productions at the time in Ventura (he's since moved to Austin, Texas), with anecdotes along the way about most of the eccentrics in front of the camera. Also included on the disc is the theatrical trailer. However, the real goodies lie on disc two including the presentation of the entire 75-minute Garbanzo Gas feature, which is about as astonishing as you'd expect. If you ever wanted to see opening credits with a guy in a cow suit singing a song about a chicken crossing the road to get to a whorehouse, this is just your ticket. There isn't much of a plot aside from the tribulations of that cow, but you won't care. This film is presented in its lower def glory with windowboxing to avoid any unsightly upscaling issues, but you can always zoom it in if you feel so inclined. Anyone who hasn't seen the main feature might run screaming from the room, but there's a lot of pretty hilarious and clever wordplay and inventive insanity here if you're in the right frame of mind. Also, the songs are pretty hysterical, especially "Food Court." "Schlong Oysters" compiles 25 minutes of deleted scenes from the documentary, which ranges from a look at Giuseppe's handmade trailer wall art to street filming outtakes. In "Visual Medium Observation," Plante joins Giuseppe for a video interview in 2012 (clocking in at 28 minutes) with the title coming from a written piece about the process of how people process visual media. Topics bounce all over the place including his film inspired by addiction to his other modes of expression like novellas and some of his favorite films like Bring Me the Head of Alfredo Garcia and El Topo, not to mention an artistic epiphany while watching Grumpy Old Men. In "Bill Nowlin Lives," Giuseppe interviews one of his regular actors for 14 minutes about the process of how their films came together. "5th Wheel" is a Giuseppe TV pilot he shopped around to all the networks; the mind boggles what might have happened had it wound up on ABC in primetime. Finally, "Directed by Giuseppe" is a montage of credits and opening titles for many of his films woven together for an astonishing 5-minute experience. The package also comes with a liner notes essay by Bill Gibron drawing parallels to Godard and Warhol and an essay/review about the film by Mark Borchardt. Amazing stuff.