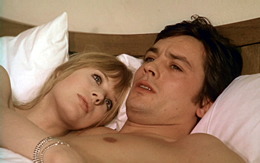 This dizzy example of European art house cinema by way of the grindhouse became notorious among late night TV audiences for its can't-miss concept of legendary singer and '60s rock figure Marianne Faithfull as a hog-riding nymph wearing little besides her black, skin-tight leather suit (which inspired the more alluring alternate title of Naked under Leather). The uncut version became something of a hot ticket as well thanks to a few flashes of skin, a reasonable progression for an actress who had become the first to ever drop the "f bomb" in a legit movie one year earlier (in I'll Never Forget What's'isname). However, the most shocking thing about the film might be the fact that it was directed by legendary cinematographer Jack Cardiff (The Red Shoes), who had already helmed a weird assortment of titles like Dark of the Sun, The Liquidator, Sons and Lovers, and Scent of M 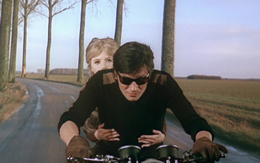 ystery. (Of course, the strangest was yet to come with The Mutations.)

This psychedelic romantic fable follows a young woman, Rebecca (Faithfull), who leaves her newlywed husband and tears across the countryside from France to Germany to see her ex-lover, a professor named Daniel (Delon), on the motorcycle he gave her as a wedding present. Along the way the viewer gets lots of flashbacks, fantasy sequences, and languorous love scenes before the appropriately downbeat ending, all with a trippy score by Les Reed (worthy of hunting down on CD if you have the chance).

Though vaguely titillating in a soft focus sort of way, this is more an interior monologue on the part of its heroine with lots of pretty colors and visual effects. Is it a good movie? That's definitely debatable, but apart from some iffy rear projection work, it all looks great thanks to Cardiff's keen eye, and the two leads are certainly photogenic even if the script doesn't demand much more than dreamy looks off at the distance. Perhaps the most memorable sequence features the 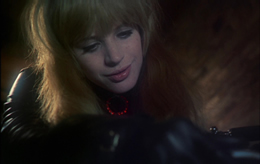 fetching Faithfull imagining herself riding horseback while Delon gradually whips away her leather garb, and lots of solarized landscape and sky shots make this prime material for acid heads.

The first DVD of this film came with a mildly letterboxed non-anamorphic image from Anchor Bay; the film was obviously shot on less than ideal stock and features a number of video-processed shots and laboratory effects which increase the grain and darkness while wiping out whatever benefits 35mm might have offered. Unfortunately, the sound is shallow and scarcely an improvement over the old video editions (contrary to the liner notes, Monterey issued this uncut print - complete with full frontal Faithfull - in the mid-'80s). The music should come roaring out at the beginning; instead, it's a mild whimper. The DVD features more extras than usual for an early Anchor Bay title including cast and director bios and the US trailer in addition to a commentary by Cardiff, who talks about the locations, hiring the two leads, and switching into flower power mode rather than the more traditional studio fare in his past. Subsequent editions appeared from Redemption in the US (anamorphic but not much of an improvement) as well as a couple of iffy European releases.

The Blu-Ray from Kino Lorber and Redemption (under its Jezebel banner for saucier, non-horror fare) does what it can with very tricky source material; this is a soft, very dated-looking film, and the video-assisted fantasy scenes complicate things even further. That may account for why it's an interlaced presentation, a real anomaly among the Kino/Redemption releases, which results in some motion blurring and pretty harsh combing that will be more obvious on larger displays. It's easily the best this has ever looked, of course, and better than the few (now mostly pink) theatrical prints still remaining in one piece, but keep your expectations in check. The audio is definitely a more unqualified improvement, finally sounding clear enough to understand all the dialogue and at least appreciate some of the wilder sonic moments. The commentary is carried over here along with the strangely muted theatrical trailer and a stills gallery.