Easily the most obscure color horror effort from Italian horror trailblazer Riccardo Freda (The Horrible Dr. Hichcock, The Ghost), this oddball gothic potboiler never received much of a release in Europe (or anywhere else). Even in an age filled with neglected titles plucked from the jaws of oblivion, Tragic Ceremony (full title: Tragic Ceremony at Villa Alexander) may have a tough time winning converts unacustomed to the bizarre state of Italian horror moving into the 1970s. 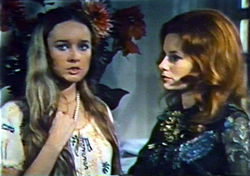 A vacation of sailing and exploring for pretty Jane (Camille Keaton, circa Solange) and three of her freewheeling young friends takes a turn for the worse when they wind up stranded in the countryside during a dune buggy expedition. They find refuge at a remote palatial estate run by Lord and Lady Alexander (Twitch of the Death Nerve's Luigi Pistilli and Thunderball's Luciana Paluzzi), a peculiar noble couple hosting some friends for the evening. That night Jane finds her sleep interrupted by strange noises, and as she drifts through the mansion by candlelight, she happens upon her hosts engaging in some satanic devilry 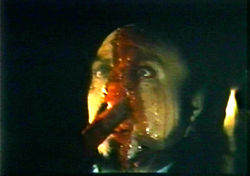 which quickly turns into a potential sacrifice. Much graphic bloodshed ensues, with Jane and company fleeing for their lives into the night. But the nightmare is far from over...

First shown in Italy as Estratto dagli archivi segreti della polizia di una capitale europea (or Taken from the Secret Police Archives of a European Capital), this film is far more strange and intriguing than its milquetoast monnikers would lead you to believe. Lurching between '60s style gothic atmosphere, Jess Franco-style reality bending and possessions, and trendy gore (including one outrageous cranium splitting), Tragic Ceremony doesn't do much to advance its director's artistic growth but does represent a weird collision between the rigorous formalism of his gothic classics and the surreal nastiness of his last film, Fear (Murder Obsession). (The same could also be said for Freda's sadistic giallo filmed one year earlier, The Iguana with the Tongue of Fire). Keaton looks beautiful and striking as always, but as with her other European efforts, she's more of a reactor here than an active heroine and barely manages to carry the film. More interesting are pros Paluzzi and Pistilli, though they only have a comparatively limited amount of screen time. Stelvio Cipriani contributes a typically competent score, mixing light pop with his trademark ominous suspense scoring found at the same time in his work for Mario Bava. 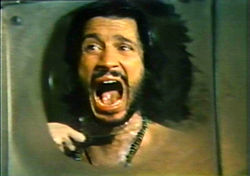 While the packaging tries to pass this off as some kind of import Australian DVD from the nonexistent company "Shoarma," the fact that this is really a region-free NTSC disc gives the gray market game away. It's actually a wildly inconsistent transfer lifted directly from the Spanish prerecord VHS, which means you get some dropouts and tracking problems rolling through the image from time to time. Colors are usually vivid but smeary and dupey, and detail is wanting especially in night scenes. At least the disc offers optional English subtitles, making this a rare occasion for Freda's admirers to appraise the film for both its visuals and storyline. Unfortunately the transfer is also cropped to full frame, while the compositions were clearly meant to be 1.85:1 and lose quite a bit from the sides in numerous scenes. Inexplicably, the menu includes an excerpt from Ennio Morricone's The Fifth Cord.