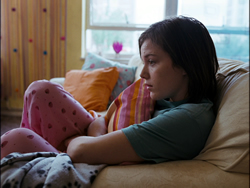 Sort of a slightly nicer version of Heavenly Creatures crossed with Mike Leigh, the gritty British drama Fish Tank hones in on the troubled day-to-day life of Mia (Jarvis), a 15-year-old teen living in public housing who's been expelled from school and acts out whenever possible. Her chain-smoking mom, Joanne (Wareing), then triggers a seismic shift in the household when she brings home Connor (Centurion's Fassbender), a handsome guy with a very vague personal history. Mia first spies him the morning after when he stumbles into the kitchen shirtless, triggering a hormonal rush that continues to build when he hangs around and takes both mother, daughter, and younger sibling Tyler (Griffiths) for a country drive. Subsequent events are best left unspoiled, but the potential for violence and ultimate moral gray areas leave the film with far more than a typical tidy resolution. 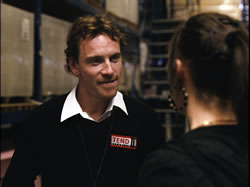 Director Andrea Arnold (Red Road) first gained major attention with her Oscar-winning short film, "Wasp," which revealed her incisive ability to delve into troubled, addiction-riddling everyday lives. She makes a significant discovery here with Jarvis, a powerful presence whose own life apparently isn't too far off from the one depicted in the film; whether she can continue channeling her work here into a full-on career remains to be seen. While she has to carry the bulk of the film, Fassbender and Wareing are very strong as well, with the former pulling off an extremely tricky tightrope act with his character whose difficulty only becomes fully apparent in the closing scenes. 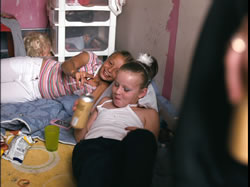 Interestingly, Arnold shot this film with intended framing at a 1.33:1 aspect ratio, an extremely rare aesthetic choice you usually don't see now outside of a few short films and Guy Maddin features. The American and British releases both respect this decision and feature exemplary Blu-Ray transfers, though the US Criterion option is ultimately the way to go as it features the largest number of supplements and a perfect A/V presentation. The DTS audio seems a little extravagant given the nature of the film (those optional English subtitles might come in handy a few times), but when music and sound effects do come in, it sounds great. Three of Arnold's short films are included: the aforementioned "Wasp" (a 25-minute gem in itself), "Milk," and "Dog," whose production years range from '98 to '03. (Only "Wasp" is on the UK version.) Wareing appears for a 15-minute video interview about her role in the film, while Fassbender is represented by an audio-only 26-minute interview at the Museum of Moving Image that's interesting as far as it goes, but you may want to find something else to occupy your time while it's on as the same filler image remains onscreen the entire time. A brief audition reel for the main role hints at some interesting directions the role could have taken, and the disc is rounded out with the theatrical trailer and a stills gallery. Regular Criterion contributor Ian Christie contributes the liner notes this time out and makes a good case for the film's relevance.