While the giallo appeared to more or less die out in the early '80s, some Italian directors still seem determined to resurrect the format. The loopiest attempt by far must be credited to Al Festa, the multi-talented director and songwriter(!) who fashioned this star-studded slashfest as a vehicle for his unique looking chanteuse wife, Stefania 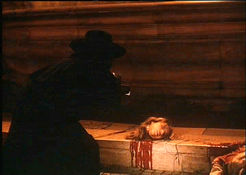 Stella (playing herself, of course). The results are truly unlike anything else ever committed to film, and Synapse's wild DVD presentation does this rabid gem full justice.

Following a puzzling black and white prologue in which a young boy stumbles upon his grandfather(?) watching a scratchy snuff movie, we jump to the present day where hot shot music video helmer Alex Ritt (Rick Gianasi) is recruited to direct the latest music clip, "Eternal City," for up and coming Roman singing sensation Stefania Stella. An American ballet dancer working on Stella's music videos goes out with Alex for a date which turns into bloody mayhem as she's slain by Rome's notorious "video killer," a maniac who cuts up women and videotapes the results for the police. The inspector in charge (David Warbeck) is mystified by the killings, which have become more entwined with the career of Stella. As Alex and his seductive employer find their relationship becoming more than just business, he also seeks the aid of a colorful gallery of characters, including an aristocratic psychic (Suspiria's Alida Valli), an American criminology expert (Donald Pleasence), and a crusty old historian (Phantasm's Angus Scrimm) who may hold the key to unlocking the deadly crime wave.

While Festa seems to think he's making a '90s version of Deep Red, the attempt to ape that film's running time (over two hours) seems more like excess here than a richly detailed tapestry. Stella's hilarious music videos provide even more padding than the meandering storyline can possibly bear, but this ramshackle construction actually makes Fatal Frames oddly compelling in a train wreck sort of way. Besides, it's astonishing to see so many horror genre pros in one film, though most of them are hardly in their prime here. Indeed, it's sad to reflect how many participants have already passed away.

Since Fatal Frames is still a relatively recent film, it's hardly surprising that Synapse's DVD looks and sounds terrific. The vivid use

of colorful lighting (however illogical) comes through just fine without any distortion; just check out those pulsating blues and reds. However, the movie itself is just the beginning. While Synapse already took the cake with the goofiest audio commentary ever recorded for Evil Dead Trap, this disc actually manages to equal (and possibly even surpass) that achievement. Festa and Stella provide a very dense commentary track complete with spooky reverb effects and moody synth music for the entire 125 minutes of the movie! Though many of their remarks are rendered incoherent by the combination of these audio effects and their thick accents, the little facts about the movie that do come through are generally interesting, particularly Festa's accounts of location shooting in Rome. As for Stella... well, she's about the same as she is in the movie.

Other goodies in this psychotic grab bag include two Italian trailers, one American trailer (pretty much the same), a reel of deleted scenes (including an odd post-coital spat between Stella and Gianasi), a behind-the-scenes featurette touting Festa as the great new hope of Italian horror, and some talent bios with a very unorthodox layout. Of course this just wouldn't be complete with some Stefania Stella music videos, which are basically condensed versions of the various snippets and video shoots through the feature. Now you too can astonish party guests by showing them "Alibi" and "Eternal City;" they may never speak to you again.