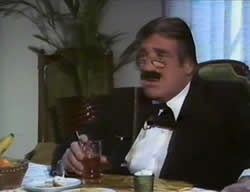 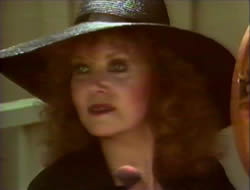 any of its famous participants, The Fartiste sounds like a bizarre showbiz joke but is actually a real, honest-to-goodness, shot-on-video '80s comedy biopic. The subject is Le Pétomane, a.k.a. Joseph Pujol, a celebrated entertainer in Paris in the latter part of the 19th century whose controlled flatulence could imitate a number of sound effects and musical instruments. Cast here as the talented wind breaker is Michael Pataki, the busy, chameleonic character actor featured in such films as Grave of the Vampire, Halloween 4: The Return of Michael Myers, Rocky IV, Sweet Sixteen, The Baby, The Return of Count Yorga, and Dracula's Dog, among many others.

Exactly how Pataki wound up slapping on a fake mustache (and an equally theatrical French accent) to star in this is anyone's guess, but he gives it his all as Le Pétomane, who spends purgatory reflecting on his life while others remember his most thunderous accomplishments. There's barely an attempt to keep things historically accurate (with '80s hair in abundance everywhere), but you get a shrink session with Wilhelm Reich, goofy recreations of his stage act at the Moulin Rouge, and testimonials from fan, fellow farter, and theater legend Sarah Bernhardt (the late Eileen Brennan in a part probably shot in about an hour). The tone of the whole enterprise is sort of an exaggerated, Borscht Belt attitude, which isn't too surprising when you have TV comedy regulars like Shecky Greene (as Sigmund Freud!) and Jackie Vernon on hand. It's short, sweet, stupid, and utterly bizarre; it's safe to say that if the title caught your eye, you might want to give it a look and then spring this on unsuspecting friends. 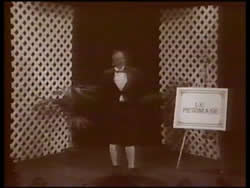 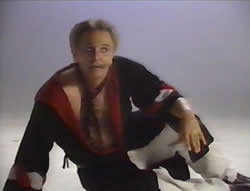 before the same subject and title were used for a 2011 Off-Broadway play, The Fartiste was shot on VHS and apparently intended for tape distribution (with copies evidently getting out there somewhere, somehow). That's exactly the look you'll find on the Alpha DVD release, which has that soft aesthetic familiar from the format's history. It's still shocking that this film was salvaged from oblivion at all, so this is definitely a case of just taking whatever you can get. At least the source is clean and free from any damage or dropouts, which is more than you can say of certain other DVD lines that charge quite a bit more than the budget price for this one.

Also included is a goofy six-minute silent short film, "That Voodoo You Do," made in 2012 but shot and edited to look like a vintage short. It's a quick, silly story about a guy named Flatbush Frank who attends the funeral of his best friend, Harlem Hank, and decides to bring him back to life that night while passing Madame Zora's Voodoo House (featuring "Today's Special: Resurrections $3.99"). As you might expect, the attempts to zombify Harlem Hank don't go quite as planned. In a weird bit of synchronicity, the title of this short (taken from a familiar song) was used as a gag line by Harvey Korman in Mel Brooks' Blazing Saddles, in which Brooks played an incompetent governor named... Le Petomane. And it featured the screen's most famous flatulence scene, too. What are the odds? Finally the disc rounds out with promo trailers for Alpha's Cult Movies TV and Fanex Files: Samuel Z. Arkoff.