Like its British cousins, Australian sex comedies are distinctive beasts; often more plot-oriented and jokey than their American and Continental counterparts, these films try to deliver T&A with a respectable veneer of above-par acting and some artistic polish. Only a few Aussie sex comedies managed to break through overseas (notably Alvin Purple, the Barry 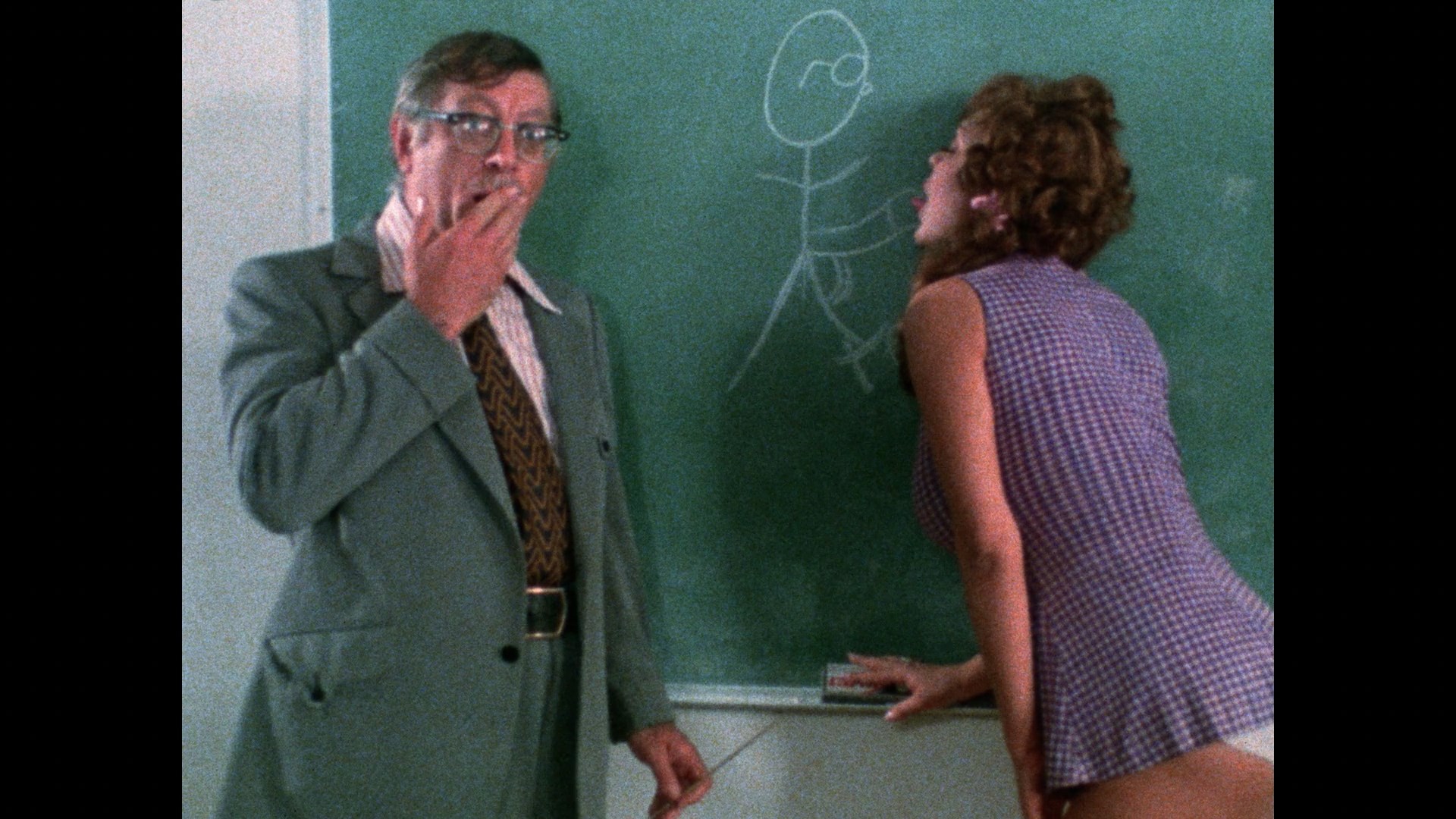 McKenzie series, and the best of the batch, Don's Party); notably rougher in content was Fantasm, which ran into censorship problems worldwide but earned a cult following thanks to an incredible cast of adult performers. Naturally a sequel was commissioned, and though it didn't ultimately fare as well at the box office, Fantasm Comes Again also became notorious for its all-star smut line-up.

Hosted by the middle-aged sex expert Professor Jurgen Notafreud (played by an unbilled John Bluthal, best known as dithering Frank on TV's The Vicar of Dibley), the film offers ten studies in female sexuality offering a wide range of styles and themes. In the first segment ("Beauty Parlour"), a session at the salon turns steamy when the hairdresser, pedicurist, and other attendees decide to shave the nether regions of their female client (Dee Dee Levitt). Then in "Card Game," a domestic game of poker between friends turns kinky as the participants use their clothes as stakes, then wind up in a human pile on the couch. A turned-on housewife (The Dicktator's Gretchen Gayle) catches her cross-dressing neighbor (A Scream in the Streets' Con Covert) stealing her underwear from a 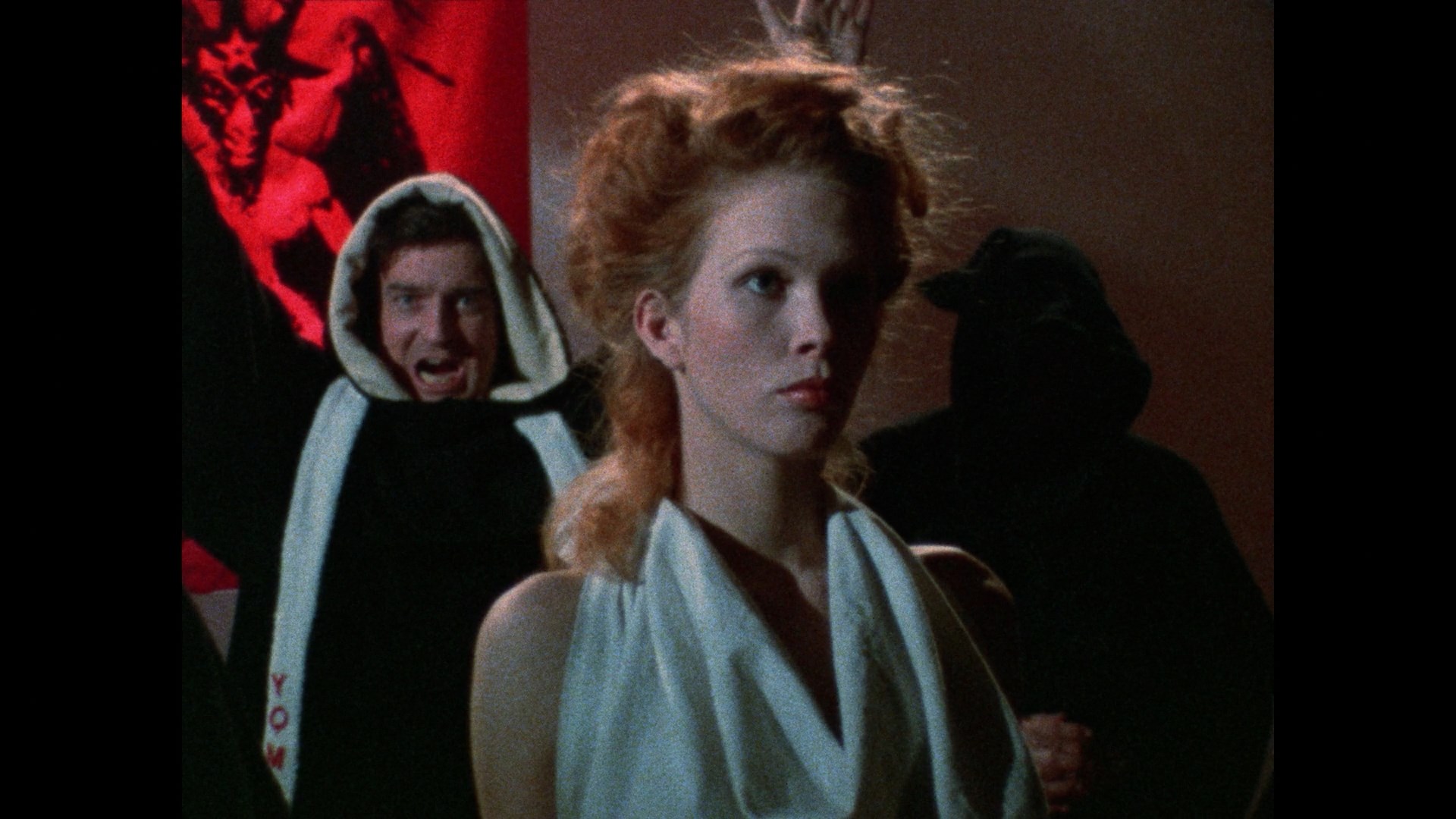 clothesline and repays him by straddling him with a strap-on in "Wearing the Pants." A young student (fresh-faced Rene Bond) pursued alone at night winds up in the clutches of black boxer Al Williams who rapes her in the ring in "Nightmare Alley;" then Uschi Digart and Mara Lutra have a literally steamy lesbian encounter in the sauna ("You have beautiful breasts." "Sank you!" "I've always wanted to have bigger ones like yours!") in "The Girls." Maria Welton gets to know her banana intimately in "Fruit Salad" and has borderline hardcore swimming pool sex with John Holmes; a gray-haired, busty mother (Candy Samples) welcomes her son home from the military with a warm bath in "Mother's Darling;" three men visit sultry Shayne's apartment and watch her perform a pretty dull strip routine in "Black Velvet;" pigtailed Roxanne Brewer enjoys some "After School" time with her weak-hearted teacher by flashing her goodies at the blackboard; and finally Serena is stripped and ravished during a "Blood Orgy" by devil worshippers in jockstraps.

A prime softscore sex title more often discussed than seen (and even then rarely seen in anything resembling a watchable copy), Fantasm finally gets the grade-A, uncut treatment on DVD. The anamorphic transfer begins with titles windowboxed at 1.33:1, then opens up to 1.66:1 for the duration of the feature. Image quality is very good considering the film's 16mm origins (it was blown up to 35mm for theatrical distribution), and the oft-scissored sex scenes are presented in their entirety. For some reason the opening monologue slips in and out of synch, apparently due to clumsy looping; much of the film unfolds without onscreen dialogue, probably for similar reasons. The biggest extra is "Penetrating Fantasm," an 23-minute featurette featuring interviews with producer Antony I. Ginnane and director "Richard Bruce" (actually Richard Franklin, future helmer of Road Games and Psycho II) in silhouette. They explain that most of the film was shot in Los Angeles since Aussie actresses balked at the strong content of the script; they also tell an amusing story about John Holmes and go through each segment, with a 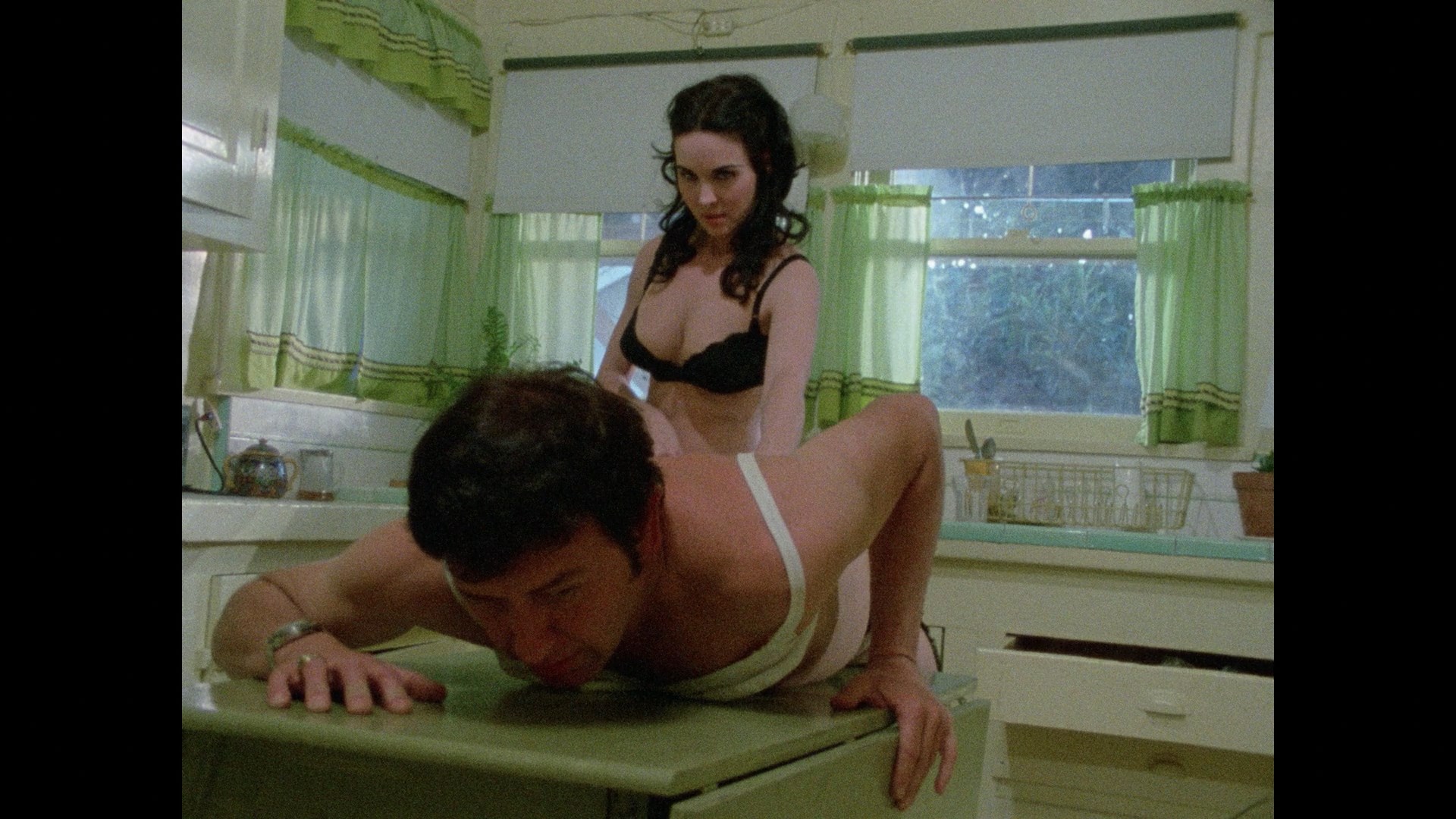 brief discussion of the sequel at the end. Much of the same material is covered in Ginnane's audio commentary, which breaks down the technical aspects of each sequence and talks about the film's publicity thanks to its constant censorship hassles. The disc wraps up with a raunchy theatrical trailer (complete with emphasis on Holmes' most famous asset) and includes some handy liner notes by Chris Poggiali. Note that the Australian edition features a shorter version of the documentary and bare-bones packaging.

Following the "if it ain't broke, don't fix it" formula, Fantasm Comes Again carries over the same formula as sex advice columnist Harold Hearne (Clive Hearn) - known to his readers as "Dear Collette" - turns over to reins to young Libby (Angela Menzies-Wills) by poring through some new letters involving various sexual shenanigans. In "Silence Please," A Touch of Sweden's Liz Woolfe wreaks havoc on studying library patrons (including a young Johnny Legend) and winds up coupling in the stacks. Lithe gymnast Michael Barton jumps around naked on a trampoline and has a bare "Workout" with gym coach Rick Cassidy before a mutual massage; Cheryl Smith won't join in on the rampant randiness at the drive-in (while watching Rene Bond in the first Fantasm) and gets raped in a van for her trouble in "Double Feature;" a stuck elevator leads to a threesome in "Going Up;" Uschi Digart enjoys another sapphic tryst, this time in the hay with Dee Dee Levitt, in "Straw Dolls;" a party for coworkers turns into gang banging and cross-dressing in "The Good Old Gang at the Office;" porn actor Bill Margold has a very graphic romp in the pool with two women while a clumsy butler (Ray Dennis Steckler regular Titus Moody) keeps dropping champagne in "The Kiss of Life;" Nancy Mann watches parents Candy Samples and Al Ward in bed and winds up joining in, all for the benefit of a fluffy stuffed dog, in "Family Reunion;" Jesse Adams is turned into a speed demon while 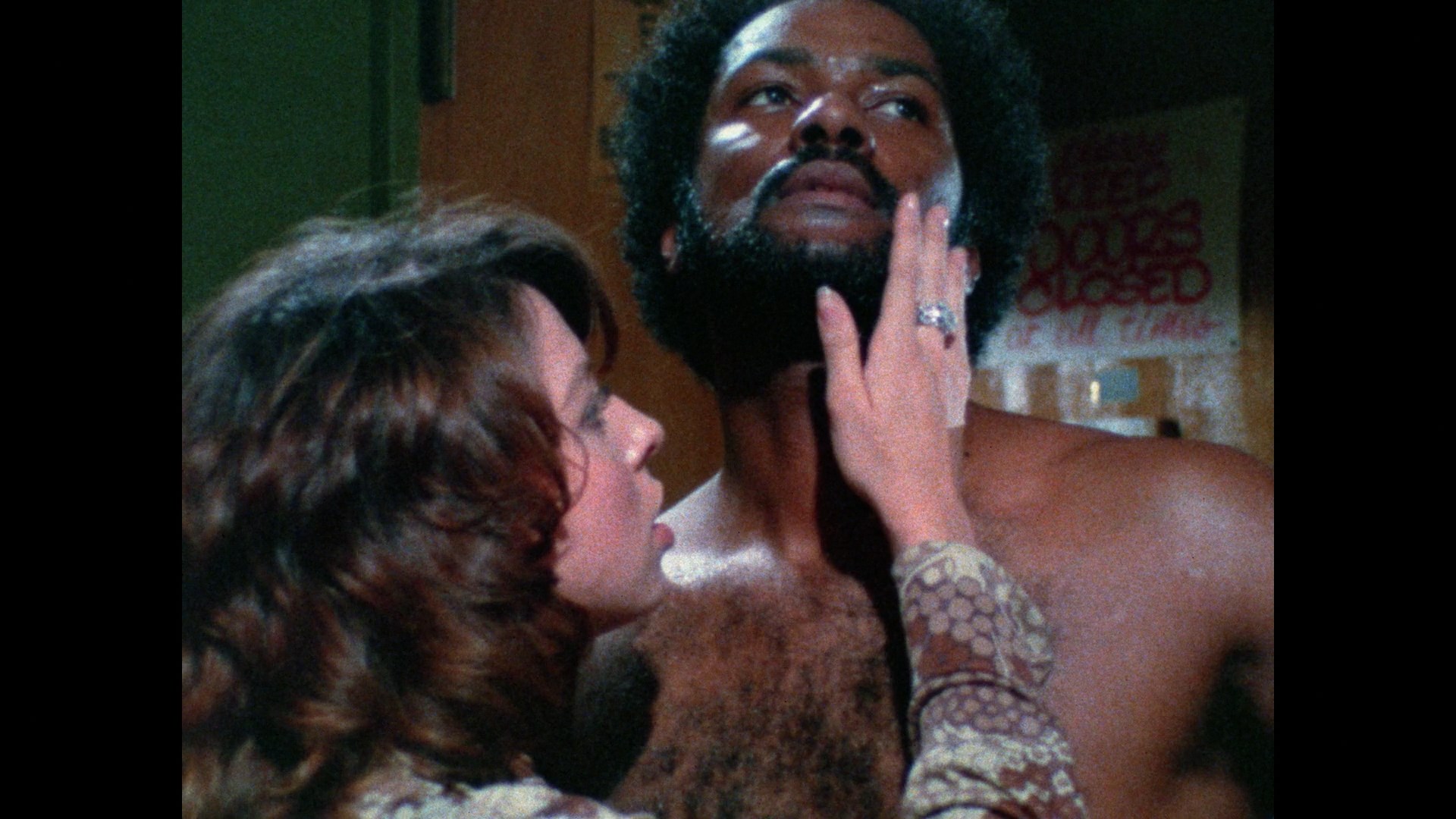 girlfriend Christine de Schaffer services him in "Overdrive;" and Serena's trip to unload her sins at church gets her more than she bargained for in "True Confession."

Significantly longer than its predecessor, Fantasm Comes Again could have done with a little trimming but still boasts some memorable highlights. Obviously fans of Cheryl "Rainbeaux" Smith will be glad to see her here, though she could have done with more screen time; all the other pros acquit themselves well and offer a few good chuckles here and there. Not surprisingly, much of the material (in both films) seems very politically incorrect now, particularly the repeated insinuation that women who say "no" really mean "yes." However, men seem to get the tables turned on them at least as often if not more, and the rampant nudity could easily be termed equal opportunity; watch it as a fantasy and leave any expectations about proper sexual etiquette at the door. Best known for the creepy Long Weekend, director Colin Eggleston (billed as "Eric Ram") doesn't display as much of a flair as Franklin but knows his way around a joke or two.

Once again the transfer is several miles above previous versions and features all of that flaccid bumping and grinding intact. Ginnane returns for another commentary, very similar to his turn for the first film; his much younger version also hosts the theatrical trailer and even pops up in the film as a monk. Once again Chris Poggiali supplies informative liner notes and shows an understandable appreciation for Ms. Smith's contributions.