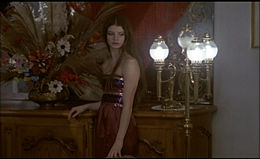 Withdrawn asylum inmate Marie (Coppé) finds her daily routine of sitting outside in a rocking chair disrupted with the arrival of Michelle (Dubas), who decides to drag her along on an escape attempt into the woods. In the outside world they hook up with 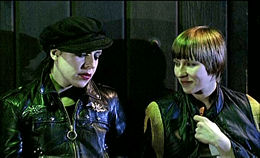 a traveling circus called Maurice and His Exotic Dancers, become entangled with a gang of bikers, drink wine and have sex with a bunch of social dropouts on a ship, mingle with some lesbian sailors and a lesbian Brigitte Lahaie, and finally meet their violent destiny on a rain-soaked pier. Hey, it could happen to anyone.

As director Jean Rollin himself admits in the supplementary interview to this DVD, The Escapees (original title: Les paumées du petit matin) had few commercial prospects since its not a horror film and doesnt quite qualify as erotica either. However, it is a Rollin film through and through, which means dreamy pacing, tender and tragic emotional bonds, and frequent imagery involving theatrical performers and the ocean. The film features most of the same technical team from his peak period in the early 80s, and the film definitely shares a similar mood to The Night of the Hunted and Fascination with regular composer Philippe DAram contributing another lyrical electronic-tinged music score. Anyone unfamiliar with the directors work will be completely baffled, but Rollin junkies seeking a fix of his unique poetic style will find plenty to appreciate.

Redemptions release transferred from the original negative is about on par with their prior Rollin releases, presented in a slightly letterboxed, interlaced non-anamorphic transfer that looks a bit dated and rough at times but is certainly watchable. The only really substantial extra here is a new 32-minute Rollin interview in which he discusses the film in depth, saying enough with the vampire films at the time as he wanted to do a real film with a real story. However, he wound up working with two different scripts put together and had to adapt severely along the way during shooting, particularly with the haunting ice rink scene which was terrible on page but wound up being the best moment in the entire film. A stills gallery and additional, unrelated Redemption trailers fill out the rest of the disc. The film was later reissued on Blu-ray and DVD from Kino Lorber, with the expected bump in quality about on far with the label's other Rollin releases.