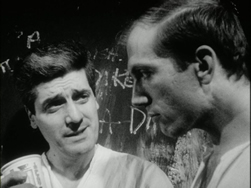 The late '60s and early '70s are now widely acknowledged as perhaps the most fertile ground for Hollywood filmmakers since the death of the Production Code, but just as significant is that era's contributions from underground filmmakers including a bold new wave of gay-themed films. Today most gay and lesbian film festivals tend to aim for mainstream subjects ranging from adolescent coming out stories to stories of romance and loss, but in the years when political upheaval and porno chic were changing the pop culture landscape, things got very edgy indeed as elements of horror, exploitation, and the avant garde became more common.

One of the most fascinating collections celebrating this sea change in underground film is the BFI's Encounters, a quartet of substantial short films from 1965 to 1971 showing a wide rang 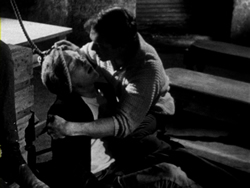 e of subject matter, technique, and taboo breaking. First up is the set's only British film made when homosexuality was still illegal, Lloyd Reckord's "Dream A40" from 1965. Shot in lyrical black and white, it's a snapshot of two young men (Mike Billington of TV's UFO and Barbara Bach's ill-fated Russian lover in The Spy Who Loved Me, and one-shot actor Nicholas Wright), whose mutual attraction must be suppressed during an afternoon out on the highway. It's extremely well shot and edited (in 16mm), and Reckord shows a fine visual sense that makes one wish he had continued his career as a director in addition to his occasional acting jobs. A good companion piece is the second film and easily the most famous in the bunch, "Vapors," made in New York the same year by the late cult director Andy Milligan (The Ghastly Ones, Guru the Mad Monk), later covered in one of the best director biographies you'll ever read. Previously available in much rougher (and watermarked) condition on Something Weird's DVD of The Body Beneath, it provides a half-hour glimpse of a very different side of pre-Stonewall lifestyles as a hesitant man named Thomas goes to spend an evening at a bathhouse. There he finds a colorful and essentially miserable collection of characters (including memorable Milligan regular Hal Borske) dealing with their unhappy married lives at home, their sense of loneliness, and other day-to-day issues, executed in a style resembling a very gritty, downbeat, and sleazy theatrical play. The brazen final shot was (mostly) censored by a black stripe across the center of the screen, which is still the case here; rumors abound that an uncensored copy still exists in a vault somewhere, but that has yet to see the light of day anywhere on home video. In any case, this is easily the best-looking rendition of this pivotal film to date and, for anyone with an appreciation for the subject matter, should merit a purchase of the entire set just for this one alone. 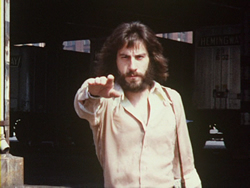 The third film in the set comes courtesy of British filmmaker Bill Douglas, something of a BFI rediscovery in recent years thanks to the releases of the Bill Douglas Trilogy and Comrades. His contribution here, the film school graduation short "Come Dancing" from 1970, appeared previously on the Trilogy release but takes on greater significance in context here. Again shot in beautiful black and white, it follows the separate paths of two young men heading out to a pier for the afternoon; one leaves his girlfriend to go out for some alone time, while the other wanders around presumably looking for a pick up and peeing off the side of the pier. Finally the two collide for a fateful meeting that carries a bit of an unexpected twist.

Last up is the most surreal and graphic offering in the set, 1971's "Encounter" from director Peter De Rome (more on him later). Shot silent on the streets of New York, it features a motley assembly of random men on the street suddenly being compelled to visit the same spot -- a dark warehouse where they converge in a giant, naked heap of ritualistic gyrations. Eerie and memorable, it's a far cry from the suppressed trauma of Milligan's film and offers an audacious glimpse of things to come throughout America's most blatantly indulgent decade. Significantly, this version is accompanied by a new, very effective music score by Stephen Thrower, member of Cyclobe (and former member of Coil) as well as the author of the magnificent Nightmare USA.

All of the films are presented full frame and are in excellent condition, though the Super 8 "Encounters" obviously looks the iffiest of the bunch. The sole video extra is an interview with Reckord, who talks about being one of the first black British filmmakers and his innovative techniques used on his two early shorts, as well as the difficulties of gay life when it was still socially and legally forbidden. The insert booklet contains some highly useful liner notes as well by the BFI's Simon McCallum, editor John David Rhodes, and Alex Davidson, including lots of biographical info and interview excerpts. 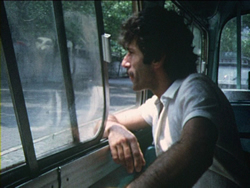 The series of eight films begins with "Double Exposure," in which a young man on Fire Island wanders through the woods and into a beach house where he encounters his more uninhibited 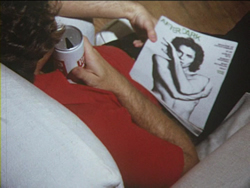 doppelganger, sort of a sunnier forerunner for the themes of Destroying Angel. Languid and stylish for seven lively minutes, it's filled with skin but barely qualifies as softcore. Things get quiet a bit raunchier with the second short, "Hot Pants," a hilarious six-minute quickie and breakthrough festival favorite with a faceless dancer ("Jonny Robinson") shaking it for the camera before things go seriously over the top. At this point it should also be mentioned that the original theatrical version of this collection featured swiped music tracked in for the silent shorts (a very common practice in erotic films of all stripes at the time), and the original accompaniments by artists like James Brown, Henry Mancini, Michel Legrand, Frank Sinatra, and Modern Jazz Quartet have understandably been replaced by authorized scores by Augustin Bousfield.

The surrealism shifts into overdrive with the third short, "The Second Coming," a spooky and explicit 14-minute study in religious provocation from 1972 in which a group of middle-aged men around the city are drawn together to a church. Inside they gather in the darkness to observe a young man crucified to a wooden cross, leading to a climax that outdoes a similar outrageous highlight from Paul Verheoven's The Fourth Man. It's sort of the darker cousin to "Encounter" from the previous collection, twisting the same premise in a much more shocking direction. Running the same amount of time is the flat-out hardcore "Daydreams from a Crosstown Bus" (also from '72), in which two New Yorkers (Joe Leone and Richard Perez) spy each other during a bus commute and have alternating fantasies about hooking up in an apartment. Again it's an interesting erotic daydream wtih some striking visuals, such as the twosome coupling behind a misty shower curtain. By far the goofiest contribution, "Mumbo Jumbo," features De Rome himself, clowning around with some exaggerated erotic sculptures, flashes of pop culture photos including Lena Horne(!), and of course, guys misbehaving in the privacy of their own homes. It's a wild 16-minute ride to be sure and probably the closest indication of what Russ Meyer might have been like as a gay man, if you can wrap your head around that idea. On the other hand, the slightest film is the nine-minute "Green Thoughts," in which actor "Derek Turner" decides to "go green" by finding a whole new way of communing with nature.

Finally we get to the two most famous and startling films of the collection, both of which were commissioned in '72 to bring it up to feature length. In "Underground," a shaggy-haired guy who looks like a folk singer and a buttoned-up businessman ("Lee L'Ecuyer" and "David Lejeune") get down to business on a New York subway, obviously shot on the fly for real. One can only hope the car used made its way into The Taking of Pelham One Two Three a couple of years later. Finally, "Prometheus" offers a particularly perverse take on the famous myth about a demigod chained to a rock and put through a daily hellish ordeal he must relive over and over. Well, this one involves a guy taken to a barren tenement building where he's confined to the floor, and... well, it involves an increasingly odd collection of visitors, and you can probably fill in the details. All of the films look a bit dated, of course, which is understandable given their lo-tech origins; interestingly, the opening title card also carries a credit to BijouWorld, who has made his two features available directly through their store. That's just the beginning, though, as the disc comes packed with a wealth of bonus material, commencing with the 43-minute "Fragments: The Incomplete Films of Peter De Rome." Directed by Ethan Reid in 2011, it features the colorful director guiding the camera through his New York stomping grounds, showing off his beloved camera, leafing through his diaries and scrapbooks, showing clips of several films never seen through to completion, and chatting about his life and work over wine with folks like director Carol Payne, photographer Leee Black Childers, and writer/horror genre favorite Maitland McDonagh. Several of those unfinished films are presented as well, two of them with Stephen Thrower scores: "Scopo," "The Fire Island Kids," the amusing body-casting vignette of "Moulage" (which would play well with WR: Mysteries of the Organism for obvious reasons), and the "black is beautiful" poem, "Brown Study." Two of these also feature scores by Stephen Thrower, and he does a fine jo

However, the biggest selling point for horror fans is tucked at the very end: "Abracadaver!," a 2008 short film by Long Island legend Nathan Schiff, the man behind such Super 8 gore favorites as Weasels Rip My Flesh and Vermillion Eyes. Originally commissioned by producer David McGillivray (of Pete Walker and Norman J. Warren fame) for his Worst Fears series, it features De Rome as a sinister painted magician whose newest assistant, the straight and very confused Marc Edward Newman, gets way more than he bargained for. The production history of this one is truly strange and tangled, with two different cuts emerging: McGillivray's version for the series (10 minutes, apparently the same one included here), and an expanded 20-minute version by Schiff containing numerous gory tangents involving Newman's girlfriend. The cut here only piles on the guts in the closing moments, and it's a jolting moment that would've made H.G. Lewis proud. In whatever form it may be, it's always nice to have more Schiff out on DVD however we can get it. Also included with this release is the expected illustrated booklet, which features new essays by Ryan Powell and William Fowler, a history of early gay smut by Rupert Smith, a director bio by Alex Davidson, and some pretty amazing De Rome diary excerpts including some hilariously pithy takedowns of Wakefield Poole's Boys in the Sand and a detailed breakdown of the two inspirations for The Destroying Angel. Certainly not a release for all tastes, but anyone brave or curious enough to try it out should find plenty of amusement and admiration in equal measure.