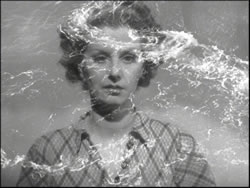 The first major film by Michael Powell, The Edge of the World is a significant work by a major international director whose reputation almost slipped into oblivion before being rescued in the last three decades. His career after this film was an almost uninterrupted string of highly accomplished films, many of which achieved masterpiece status including the closest cousins to this, I Know Where I'm Going and A Canterbury Tale. What makes this film especially interesting is that it was Powell's last solo venture before joining up with his equally significant partner in film, Emeric Pressburger; many of the visual and social themes that would come to dominate many of their films are already present here, making it fairly easy to pinpoint where Powell's particular influence lay. 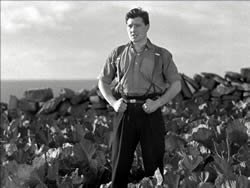 The simple but haunting story charts the fate of a tiny British island, told in flashback through the eyes of a sailor, Andrew Gray (Curse of the Demon's MacGinnis), who tells a visiting couple (Powell and Reidy) how his home became a windswept, desolate mound of rock. Years earlier, the lure of big city living was drawing away all of the vital younger members of the population, who found themselves increasingly challenged by diminishing fish supplies and a youthful workforce. Andrew wants to stay, but his girlfriend, Ruth (Chrystall), is torn by the protests of her brother, Robbie (Berry), that they deserve richer lives abroad in modern society. Their father (Laurie) finds himself unable to solve the problem, which the two men instead decide to resolve through a dangerous, potentially fatal race up the mountain's steepest cliff.

An arduous and wholly unique production, The Edge of the World contains powerful, natural visuals unlike any other film. Its sense of atmosphere drives the entire film, which also features strong, committed performances from everyone involved, and the numerous plot twists are handled sensitively enough to avoid tipping over into soap opera even during the intense, fatalistic conclusion. The actual location of Foula in the Shetland Islands is the real star here, of course, and Powell proves that a natural location can easily compete with the stunning fabricated studio concoctions he later unleashed in Black Narcissus. 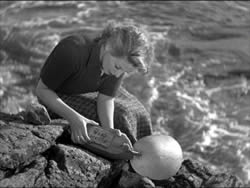 The Edge of the World first appeared on DVD shortly following a much-needed restoration courtesy of the BFI, who reinstated much footage lost over the years due to reissues. Eventually they released their own DVD, but both are easily eclipsed by the Blu-Ray edition which perfectly replicates the experience of watching this unspool in a repertory theater. Image and detail are spot-on, and while the opening credits are damaged enough to induce some worry among HD fanatics, the rest of the film fares far better. Landscape shots are especially impressive, yielding endless layers of detail invisible on the DVD. The optional English subtitles are also very handy for some of the more muffled dialogue, an issue attributable to the original sound recording. Given the ragged history of this film, it's hard to imagine it ever looking or sounding better.

All of the versions differ somewhat in terms of supplements, though all contain the most important one, "Return to the Edge of the World." This fascinating 22-minute short from 1978 features Powell returning to Foula years later to see how the actual location fared in comparison to its cinematic counterpart, and it's essential viewing for anyone who enjoyed the main feature itself. The BFI version also includes Daniel Day-Lewis reading passages from 200,000 Feet on Foula (a book inspired by the film) along with commentary by Powell's widow, editor Thelma Schoonmaker, and critic Ian Christie. The video extras on the Blu-Ray are all HD, which include Michael Powell's home movies from the same period, a 1928 travelogue piece about the film's real-life inspiration of St. Kilda, and an alternate opening and credit sequence. The usual worthy BFI booklet contains additional notes by Christie and appreciative reviews and notes about the film, as well as an interesting look at a hand-coloring technique used for some of the black and white stills. (The BFI DVD also includes still gallery supplements dedicated to producer Joe Rock and Powell's personal image collection.) The American disc is considerably smaller in supplemental material but does contain one major exclusive, Powell's 1941 short, "An Airman's Letter to His Mother." This poignant, incisive little five-minute miniature is worth holding on to the disc for Powell fans, as are the DVD-Rom supplements including the 1937 press kit. In short, go for the Blu-Ray first if you can, but the standard def options shouldn't necessarily leave your library if you already have either of them.