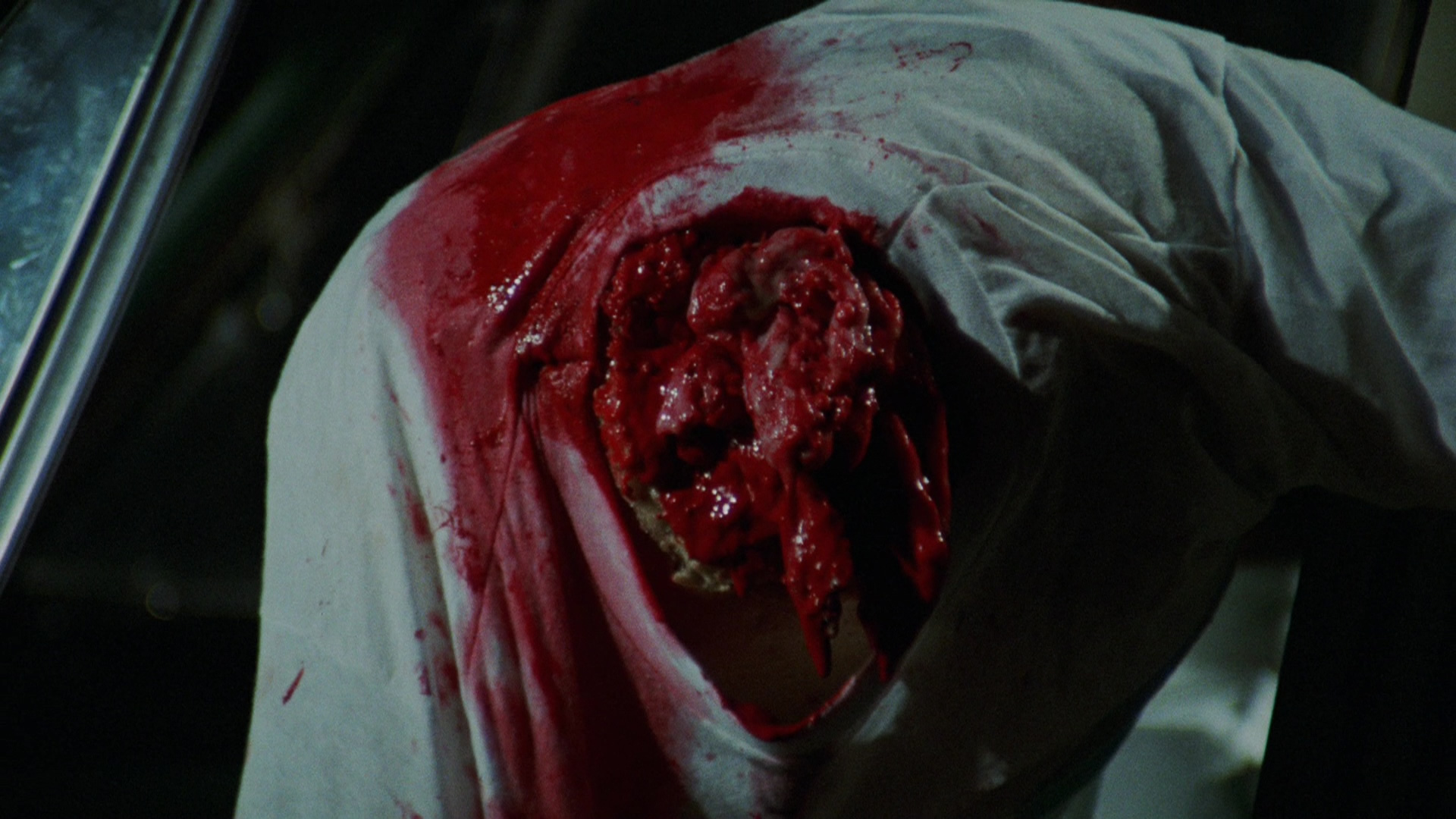 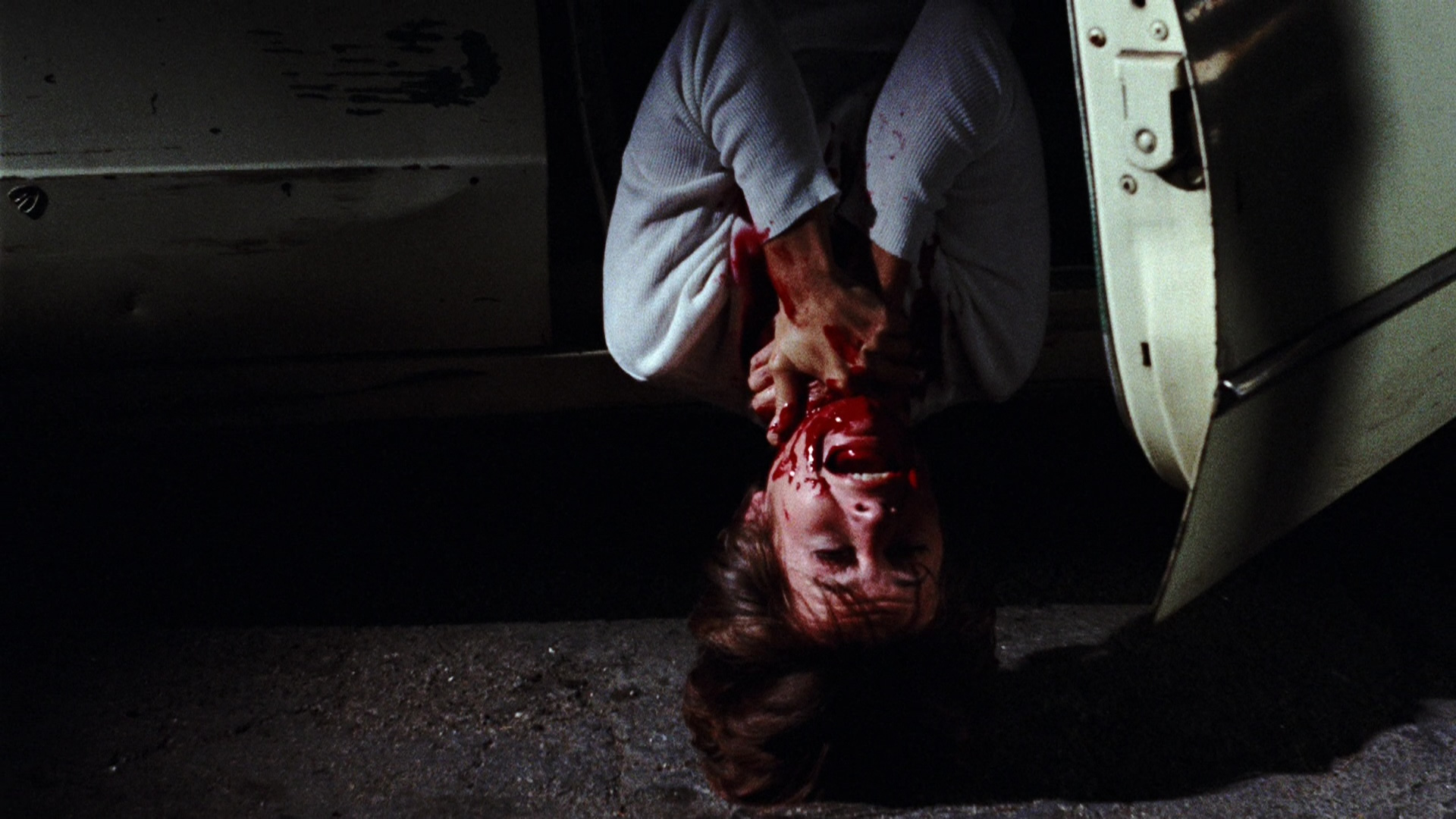 It's amazing we didn't actually get a movie called Drive-In Massacre until 1976, given the fact that drive-ins had been around since the '30s and been a hotbed of teen activity since the '50s. So here we are with a stripped-down combination of proto-slasher film and police procedural about a maniac attacking couples with a long, sharp sword at night in a California drive-in, with a flavor clearly inspired by the wave of real-life serial killers plaguing America at the time.

After a man gets his head lopped off and a woman's neck is speared in their car at the drive-in, cops Mike Leary (co-writer Goff, billed as "Jake Barnes") teams up with weapons expert Germy (Gubye) and a psychologist (Vincent) to track down the sword's owner. A license plate clue and a stint in drag lead them to one possible suspect, but that turns out to be a bloody red herring as they pursue leads involving a maniac at a warehouse, more drive-in killings, and a violent finale in a projection booth.

An exploitation movie right down to the core, this is a down-and-dirty horror programmer with no artistic pretensions. It's shot in the most basic fashion possible, but that matter of fact approach sometimes yields truly strange results like that odd warehouse detour 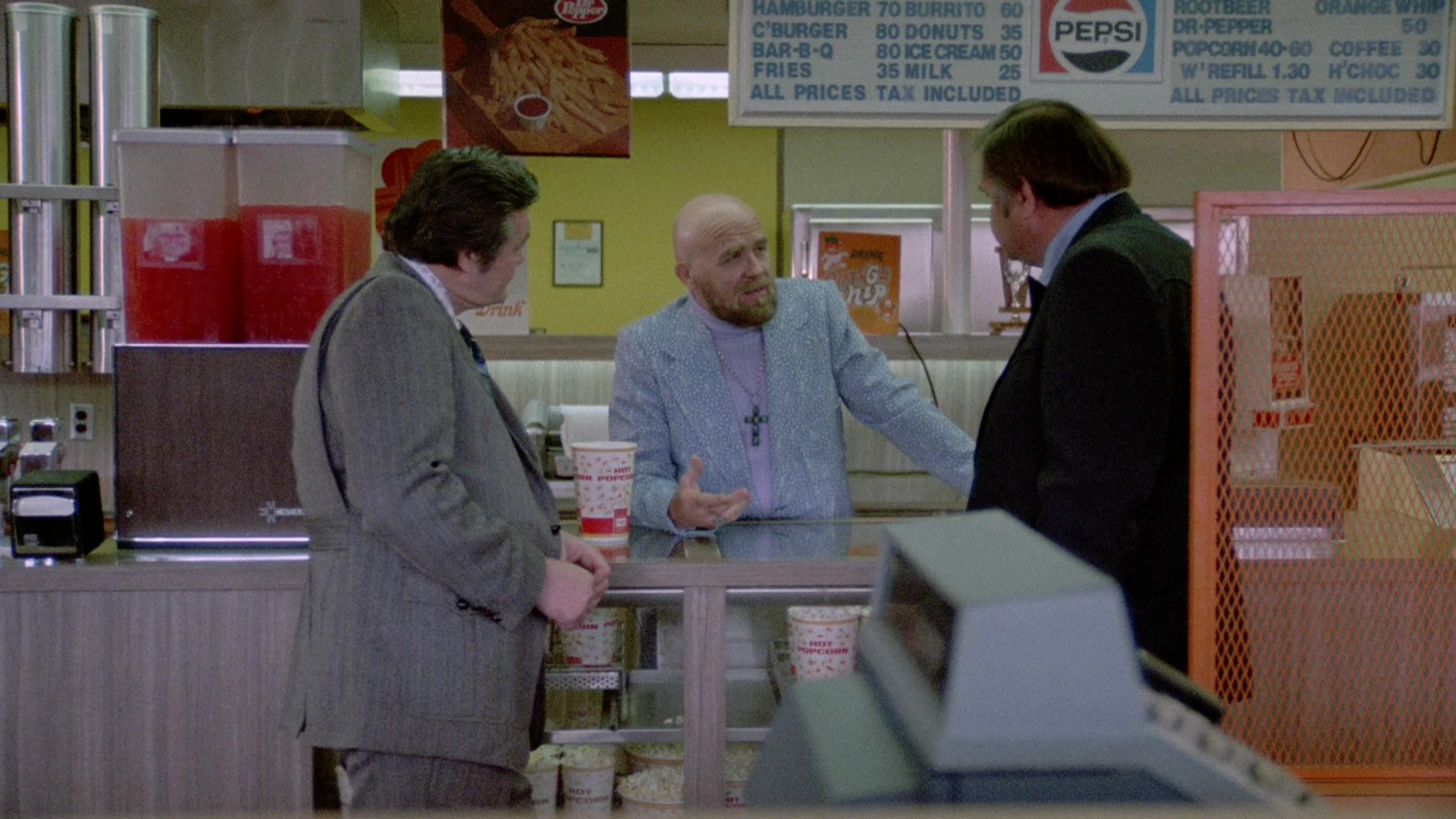 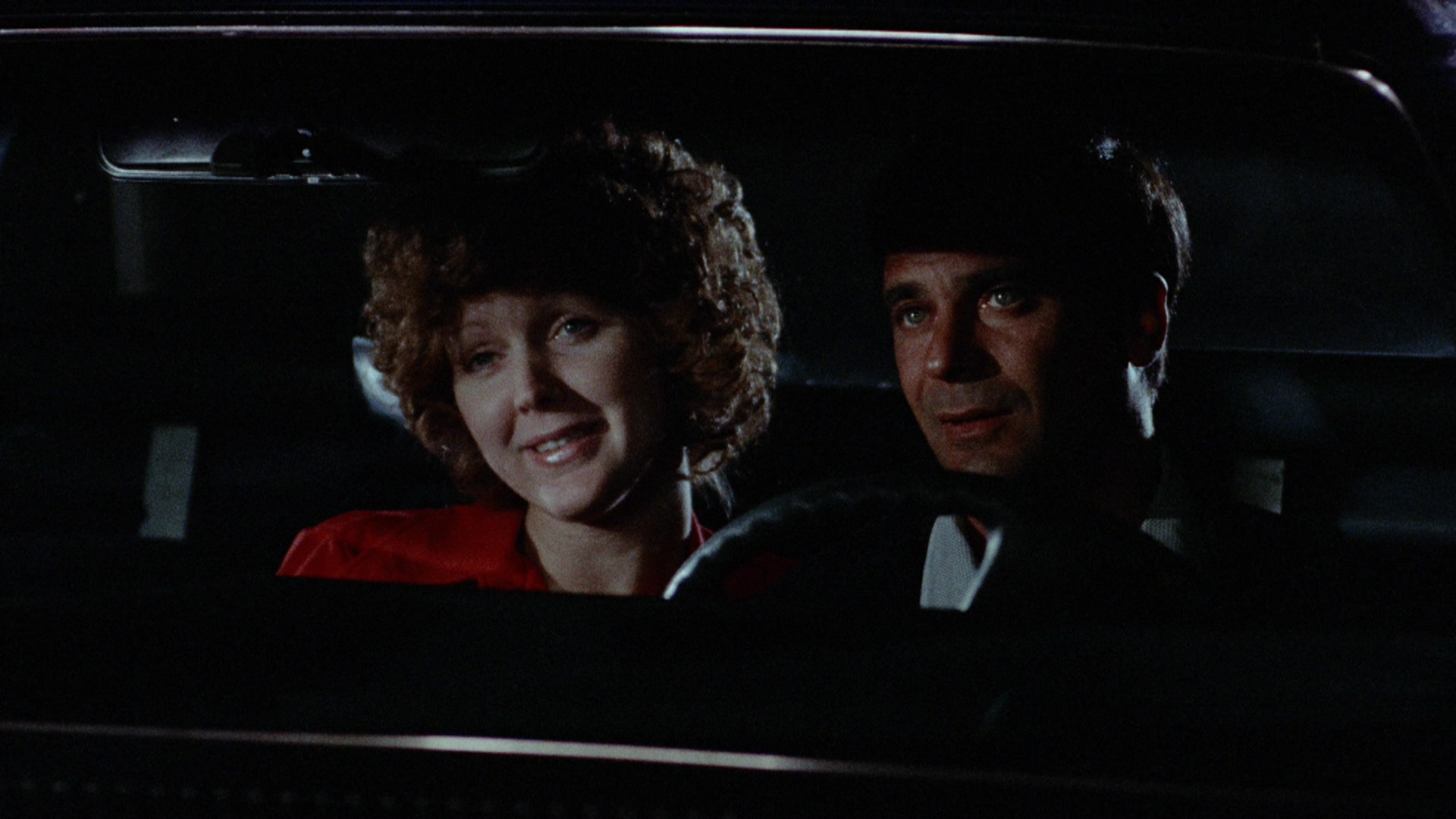 and a memorable open-ended finale, which feels like an odd fusion between the Zodiac killer and Man on a Swing with a William Castle flourish. If this feels a bit like a grungy Harry Novak title from the old Something Weird days, that shouldn't be too surprising since it features several of his cohorts behind and in front of behind the camera. Most notably, veteran character actor and softcore performer George "Buck" Flower co-wrote the film and acted in one pivotal pursuit scene, while John Tull (who starred in several Novak hillbilly movies) served as assistant director. Director Stu Segall had also started off doing softcore (and a bit of hardcore) films like The Suckers and Spirit of Seventy Sex before moving on to classics like Insatiable and Up 'n' Coming before turning to a career as a mainstream TV producer. The film was also ghost produced by Marty Greenwald (seen in one scene as a drive-in victim), who worked with Segall on several of his adult films and went on to found the genre-friendly company Image Entertainment.

Released several times on VHS over the years (including an edition from Magnum Video), Drive-In Massacre has had a spotty history on DVD including a pretty dire UK DVD from Vipco early in the format's history and a number of terrible bootleg editions from a variety of US labels that will remain unnamed. Number 20 in 88 Film's Slasher Classics Collection, the film had its 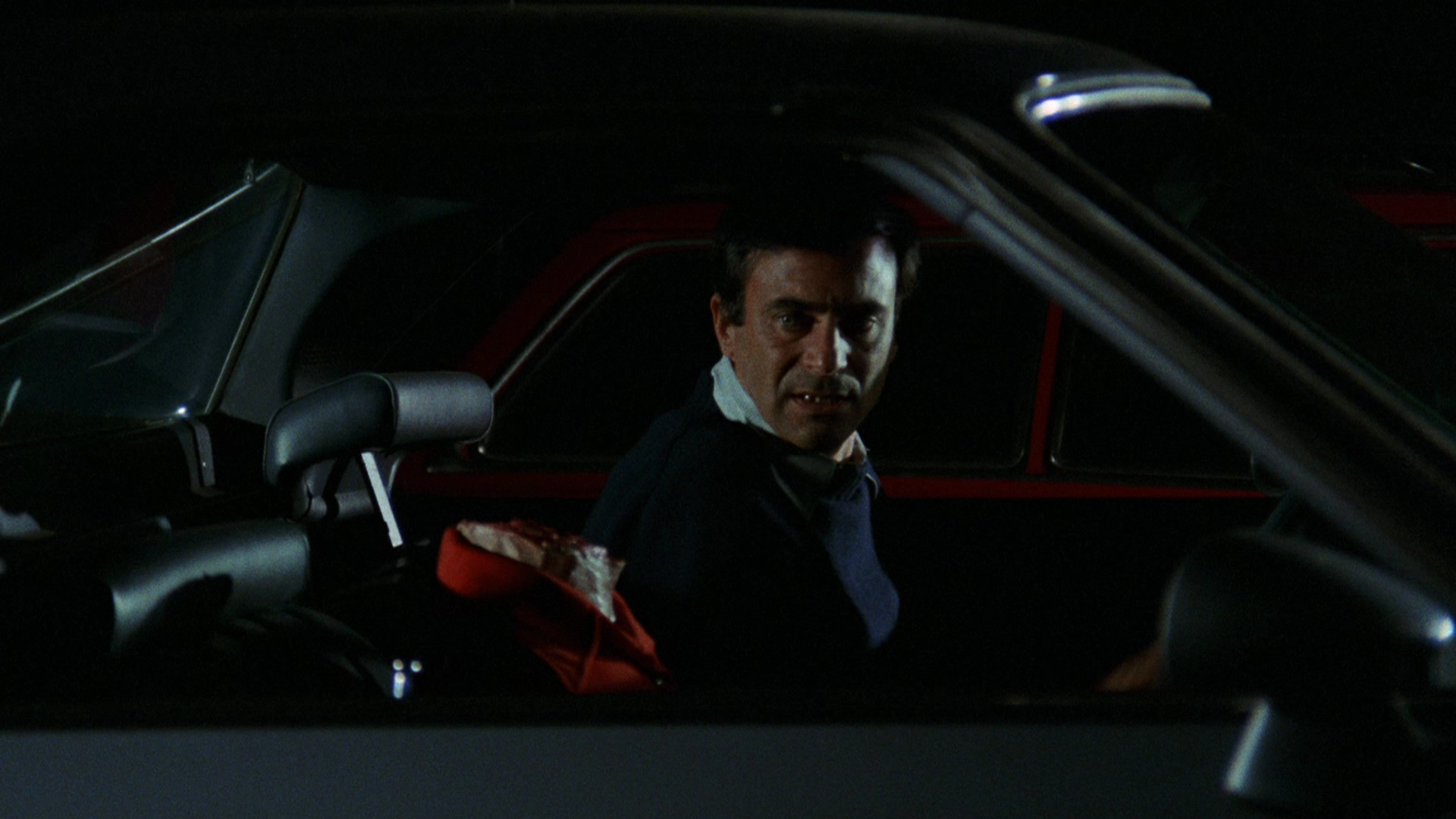 first official widescreen release with a 2016 UK Blu-ray that captures the dreary, grungy look of how this appeared in theaters. 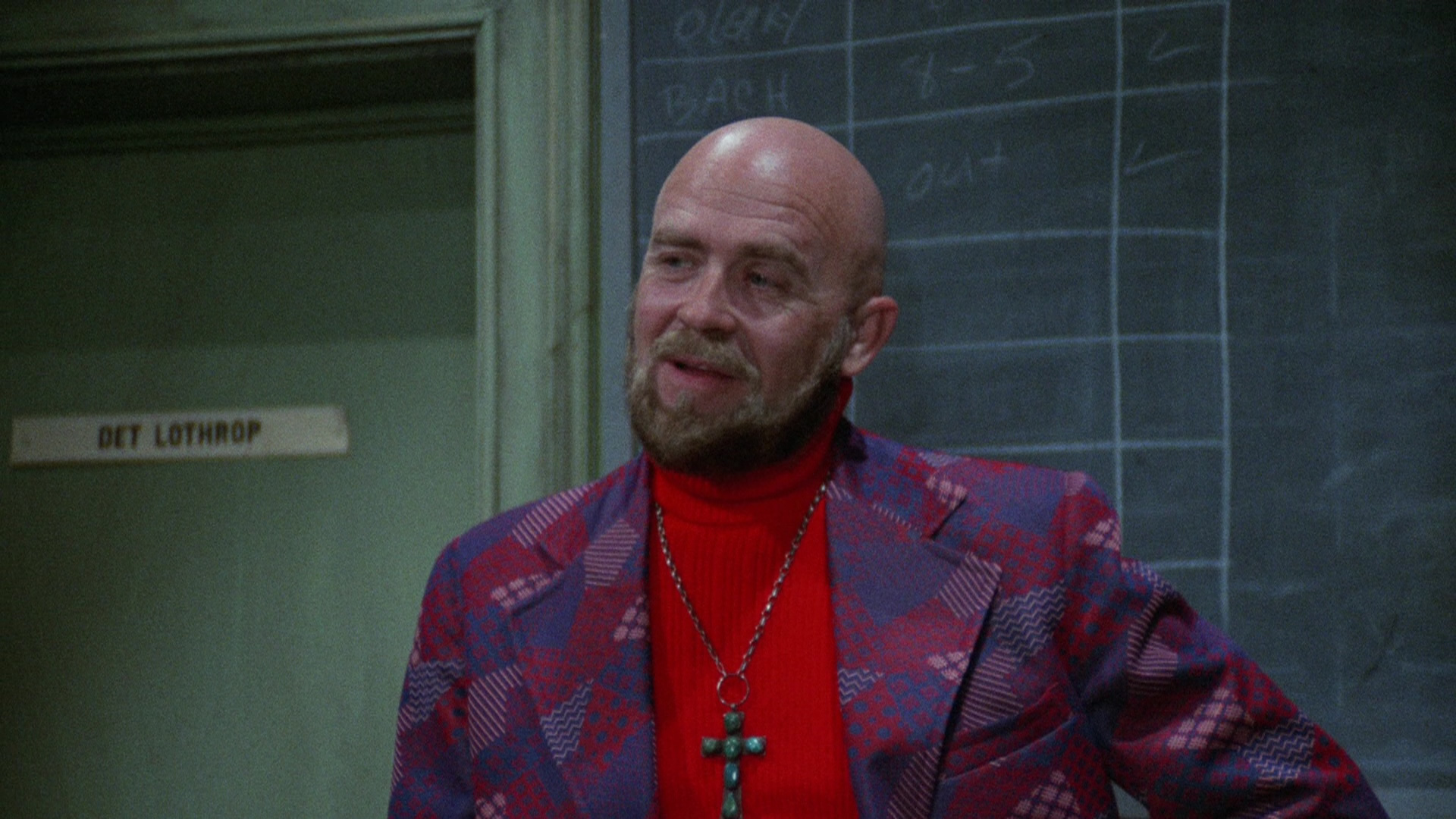 There's a dusky, brown look for the most part with interiors taking place in some of the drabbest, filthiest-looking offices imaginable, apparently by design. Apart from some specks and scratches during the opening credits, the film elements appear to have been maintained in good condition. The framing looks fine for the most part, though in the opening credits a few names scrape very close against the bottom. The LPCM English mono audio is definitely a step up from the fuzzy-sounding VHS and earlier DVD version, to put it mildly. Also included (culled from the same transfer) is an alternate 61-minute "television cut," which is still bloody but removes the contact gore imagery and features some odd, dupey video inserts shots of what appear to be some alternate takes.

In "Making the Massacre" (6 mins.), director Stu Segall discusses his general aversion to the horror genre and his willingness to make this film as a tribute to drive-ins, "a big part of our lives at the time," and the film's breakneck shooting schedule in a little over four days(!). He also chats about doing the head severing via a banana squash and a wig, with the director himself handling sword duties. In the 15-minute "Murder at the Drive-In," slasher expert Justin Kerswell (from The Hysteria Continues and author of Teenage Wasteland aka The Slasher Movie Book) speaks very close to the camera about drive-in-centric films of the period (including Ruby and Drive-In) and the generally nasty public perception of the horror genre at the time. As always he certainly knows his stuff and puts the film in useful context within the wave of films that would soon transform into the formal stalk-and-slash craze of the following ten years. Also included are a fun TV spot ("It is pure and relentless terror!") and a reel of bonus trailers including Creepshow 2, Bloodstone: Subspecies II, Bloodlust: Subspecies III, and Trancers II, while Goff is covered with an insert text interview conducted by Phillip Escott that puts to rest a few myths about him and covers the creation of this film (denying any cinematic inspirations or deeper meaning) and touching on his other work including several titles with Matt Cimber and the Ilsa series. 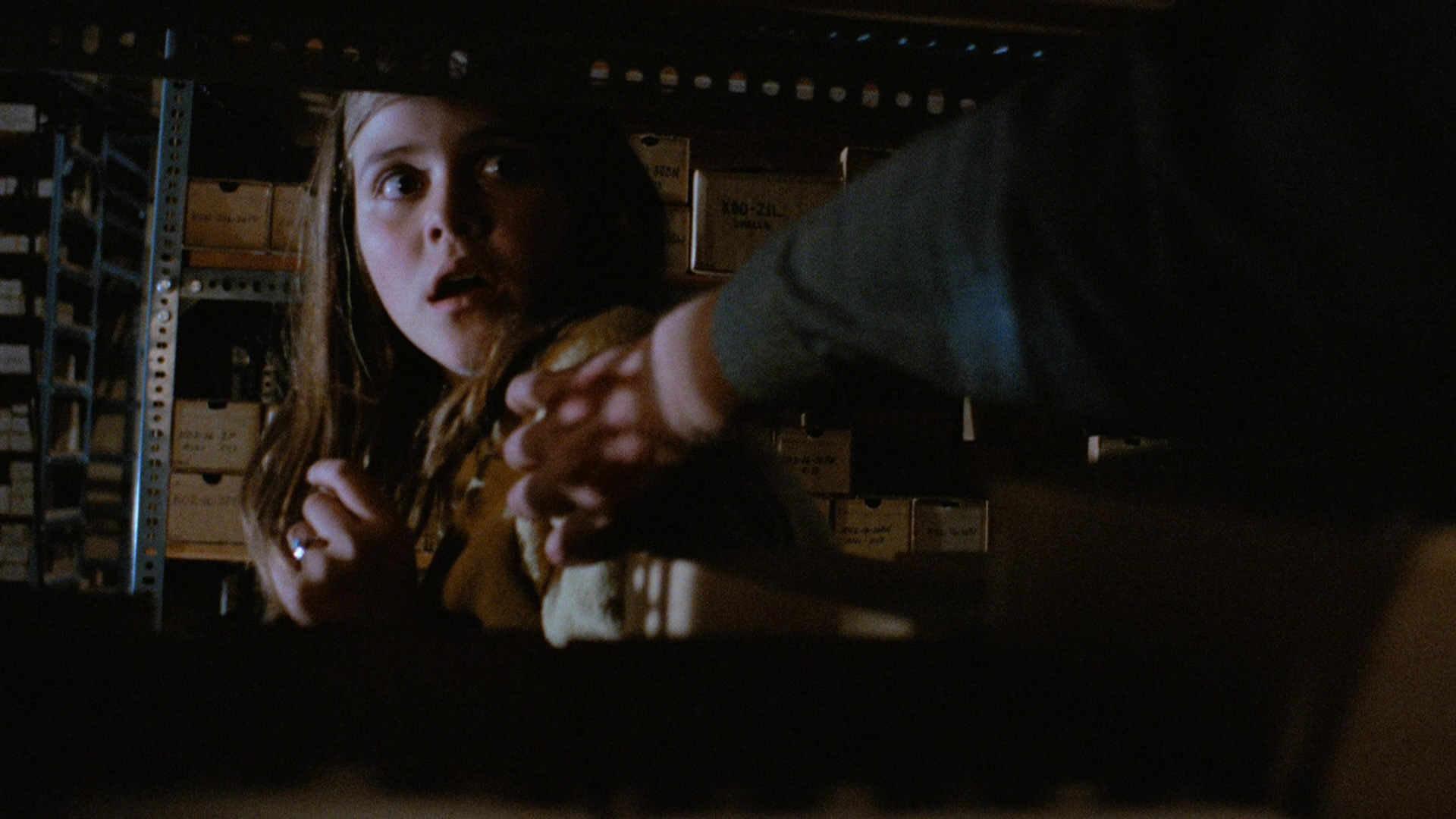 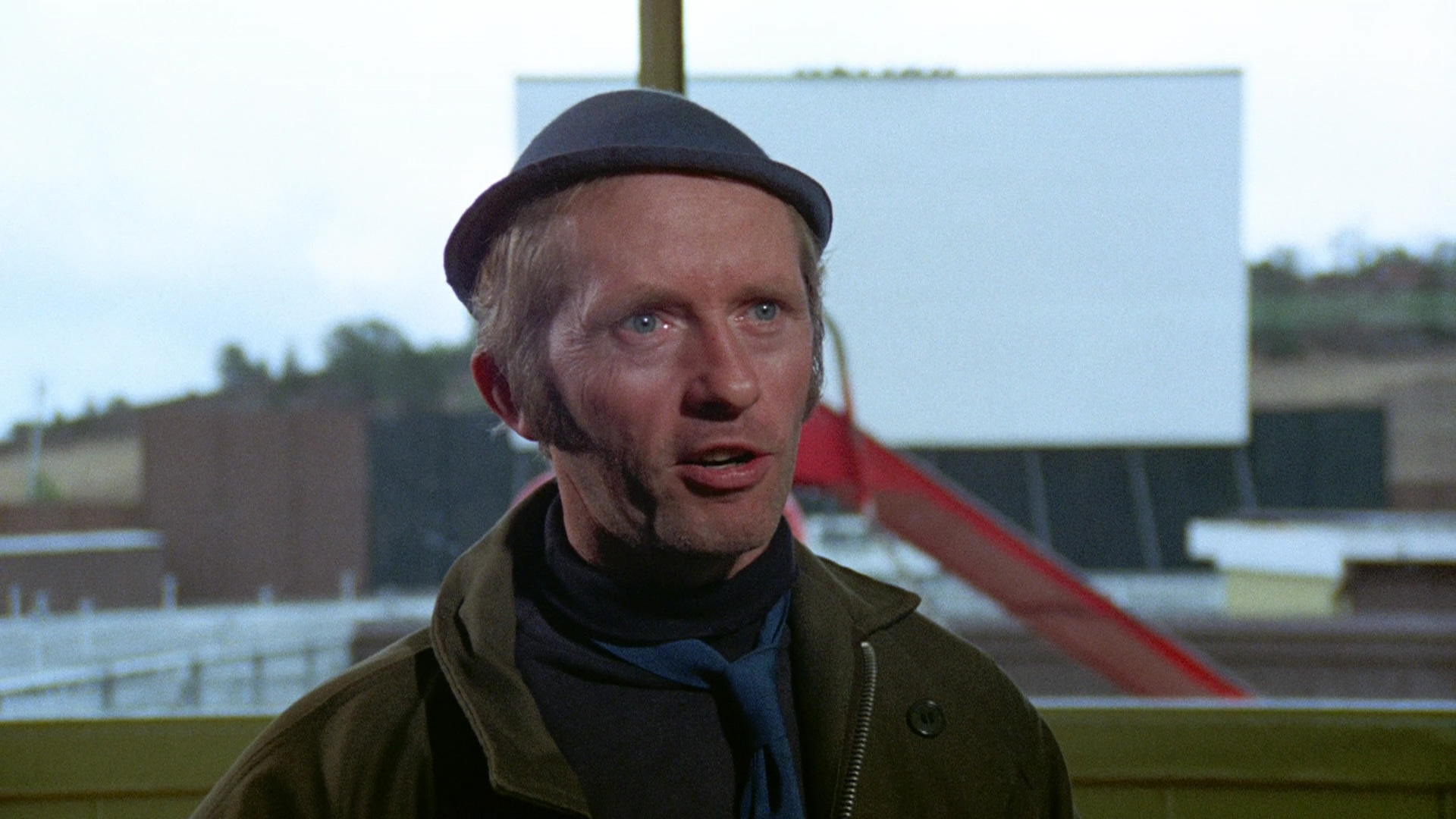 In 2017, the film made its Blu-ray debut in the United States from Severin Films (with a simultaneous DVD edition) featuring a mostly separate slate of extras and a radically different transfer from the original negative. There's a significant amount of additional image info on the bottom and sides (especially the right) with a tad less on the top, and colors look more vibrant and natural with more organic film grain and substantially more restrained whites. Interestingly, the 88 Films appears to have undergone some overzealous noise reduction in spots by comparison; look at the shot above with the car door on the right compared to the same frame grab below from the UK disc, which has scrubbed out the dirt and texture from the metal. That said, fans will likely cherish both releases as they offer very different viewing options with equally worthy bonus material. Audio can be played in either DTS-HD MA English mono or dubbed Dolby Digital 2.0 Spanish (which is amazing), with optional English subtitles. (Try them for the Spanish track for a really weird quasi-art film experience.) Segall provides a new audio commentary that's as hilariously candid as his earlier interviews; right off the bat he comments, "Boy, that's a bad shot!" but notes how much passion and love went into the "off-the-cuff" project with no money whatsoever. "Making the Massacre" is included here, In "Drive-In Days," Goff gets his time in front of the camera with a 16-minute interview covering his early theater career and love of movie theaters through his first professional stint on The Big Valley, his time with The Hollywood Reporter, and his eventual move to doing this film including the reason for its, ahem, unusual ending and his other projects with his collaborators here (with connections to everything from Clu Gulager and The Witch Who Came from the Sea to The Fog). An 11-minute featurette with actor Norm Sheridan (the peeper who gets chased down the street) is an amusing one as well as he goes into the experience of being chased by an overweight cop, shooting at that Simi Valley drive-in location, and doing dinner theater with Alderman. The funky and very disjointed theatrical trailer rounds out the disc, an obvious must for any self-respected '70s horror junkie. If possible, try to figure out a way to watch this Blu-ray in your car with the top pulled down for maximum effect. 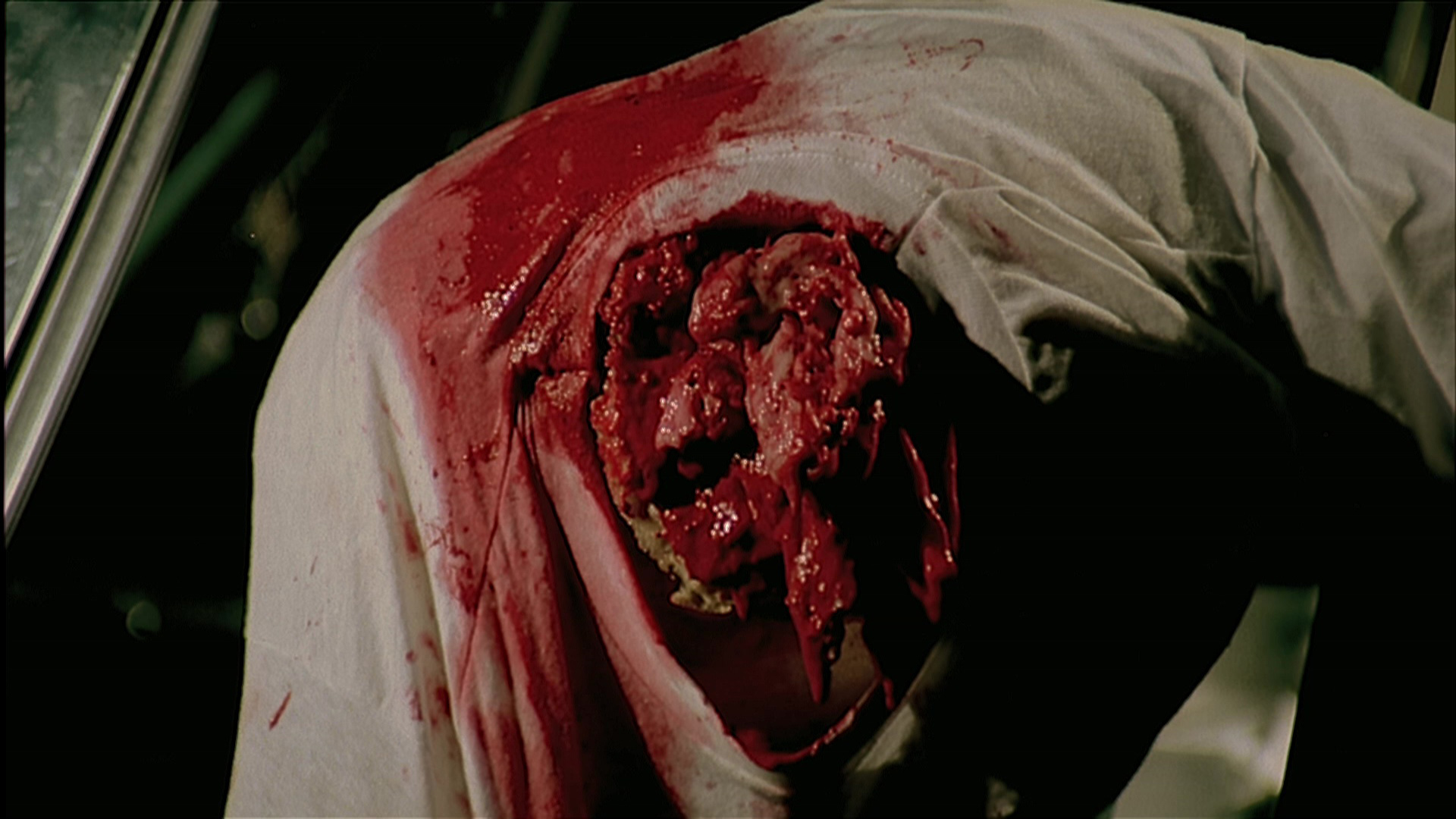 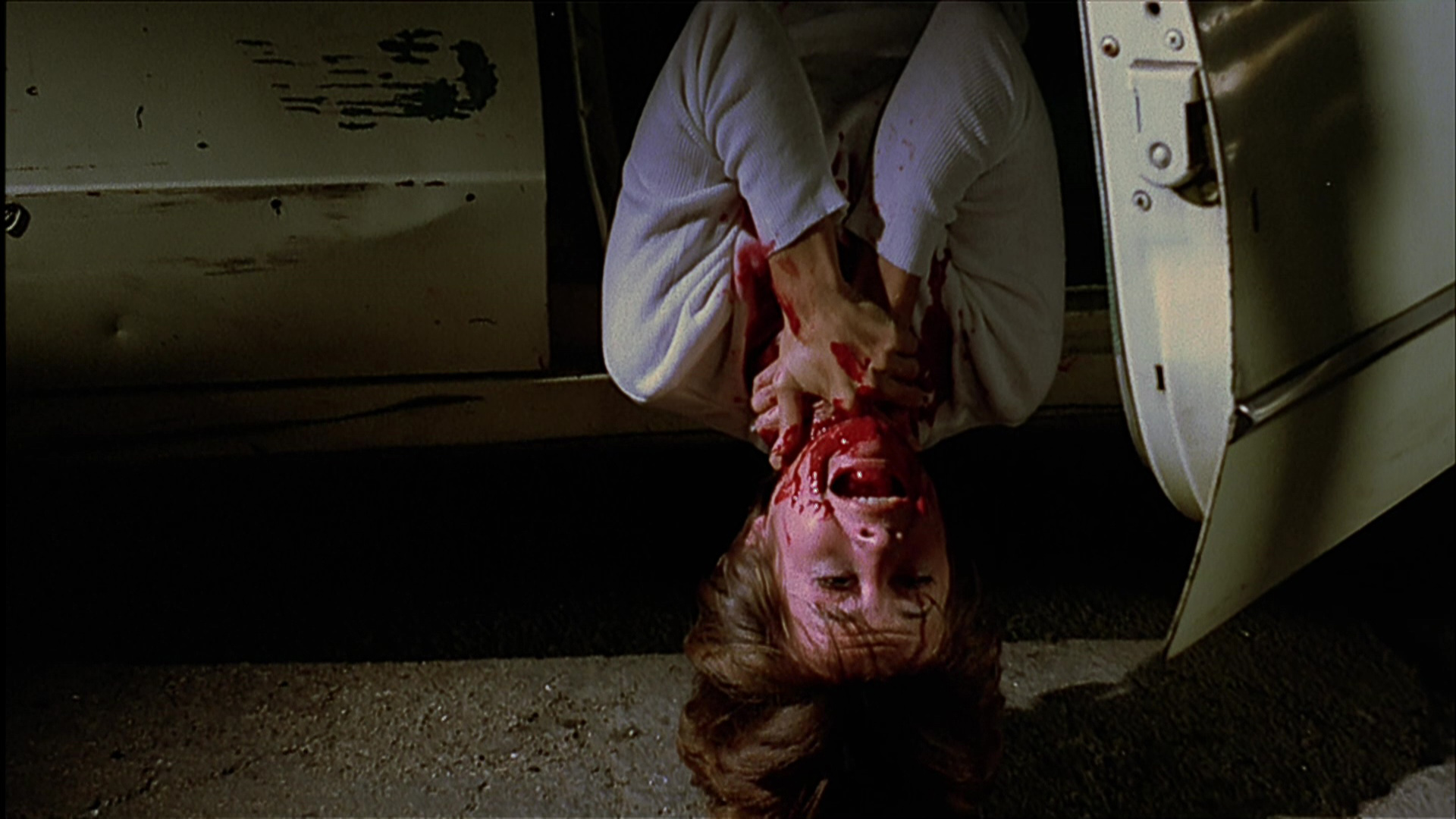 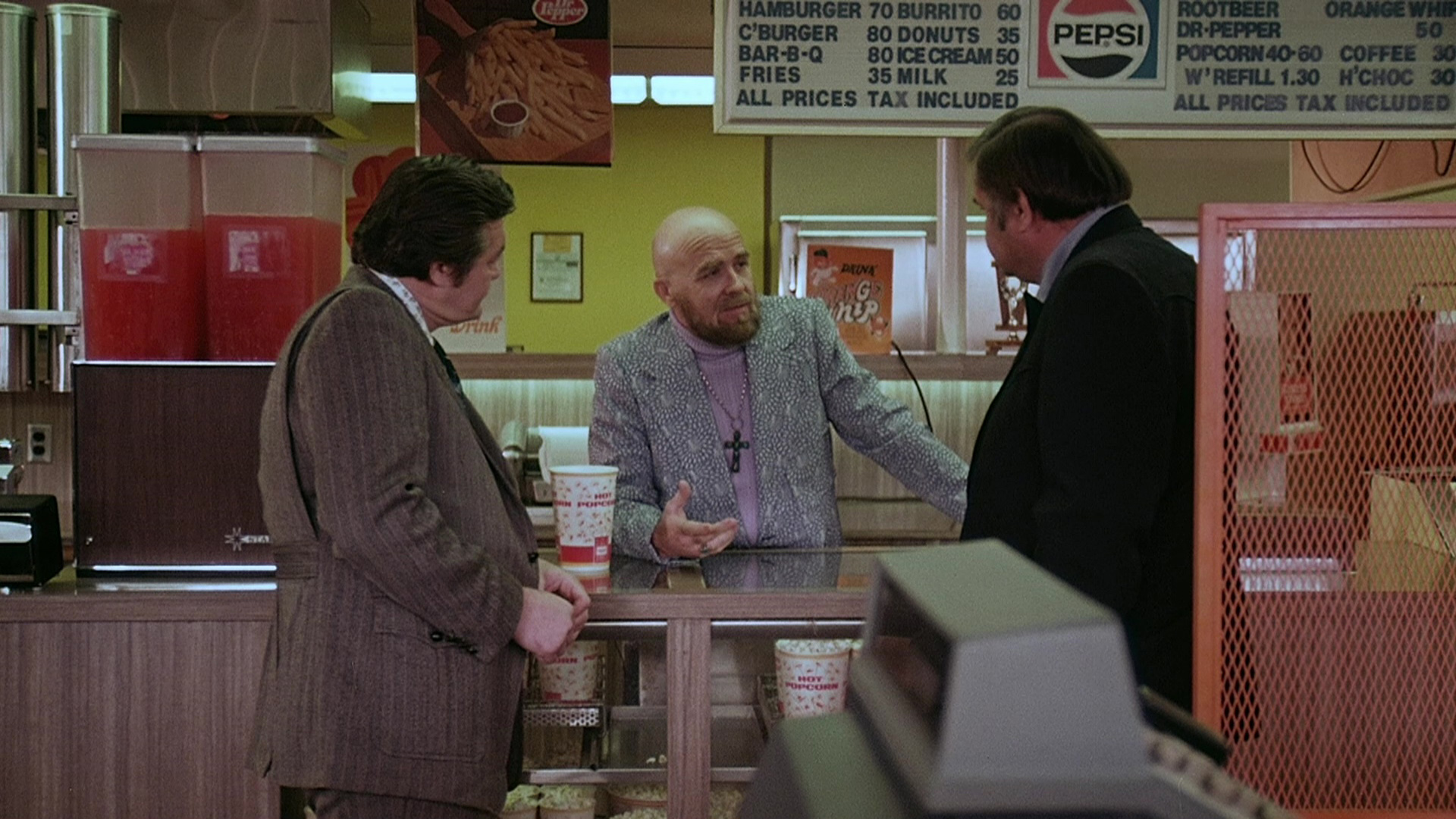 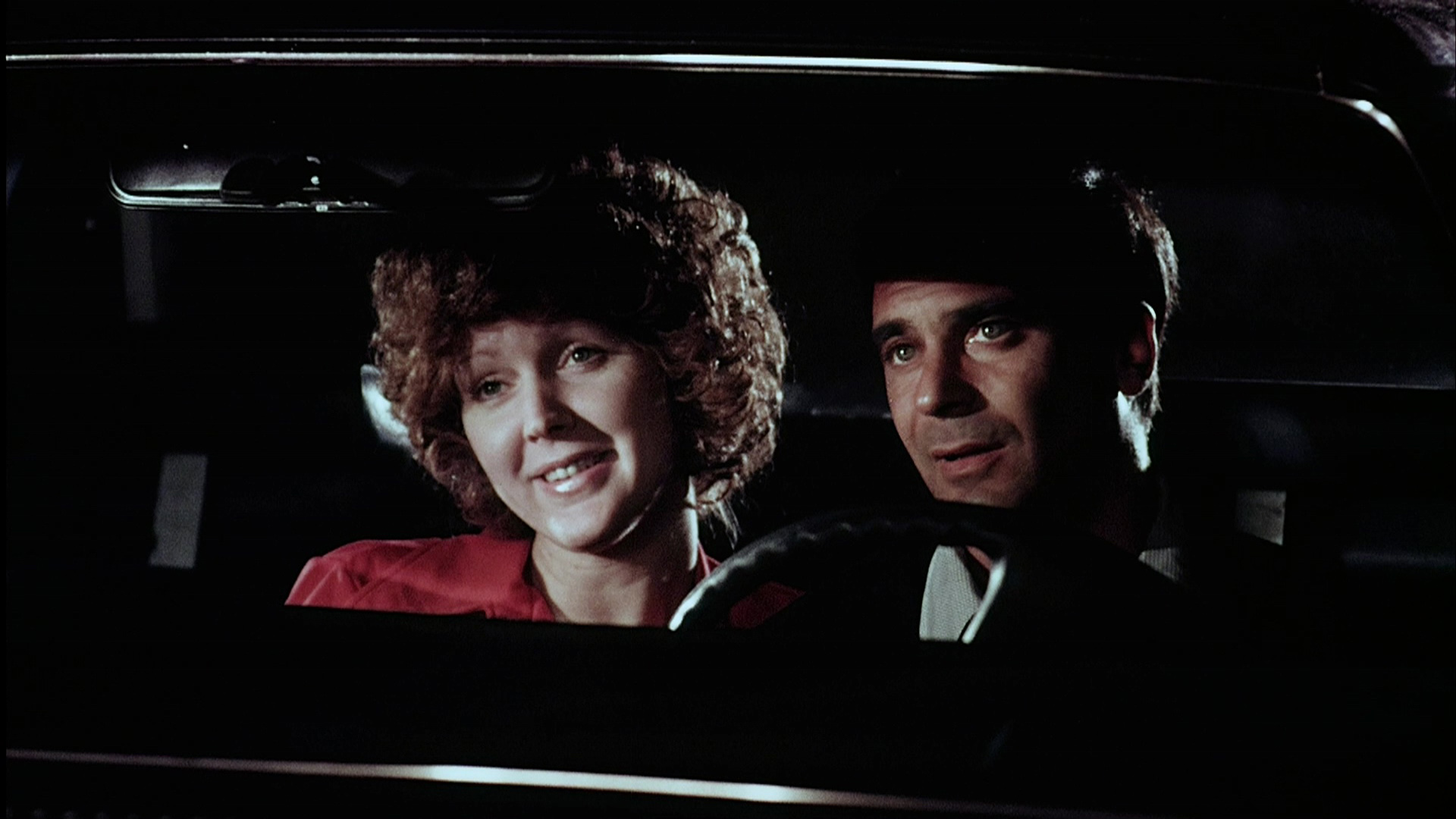 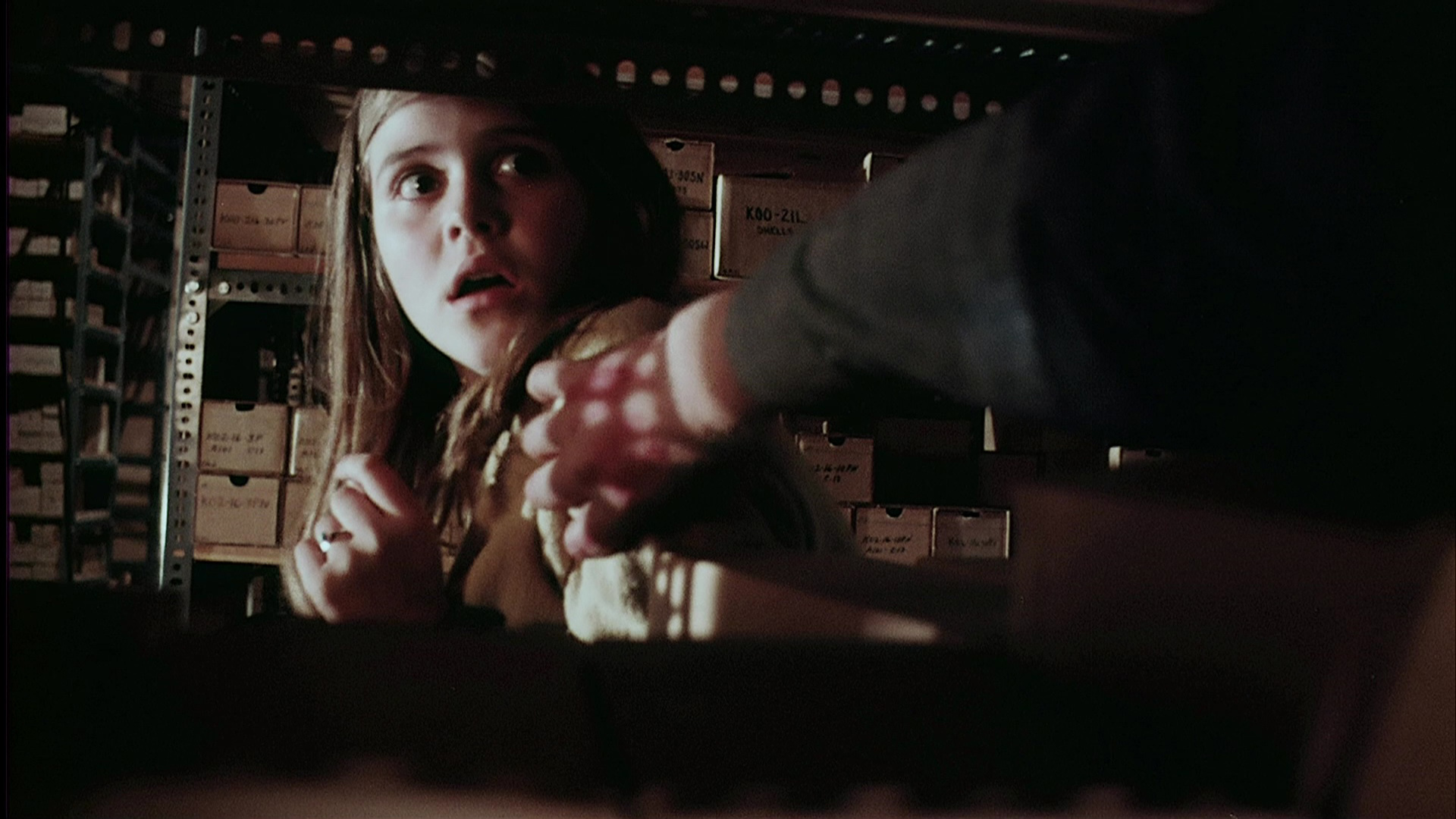