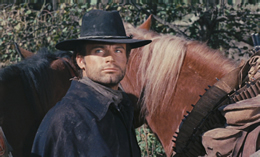 The smash international success of the spaghetti western Django (along with a certain Clint Eastwood series) turned out to be a major boost for the Italian film industry in the late '60s, with filmmakers scrambling to crank out enough gunslinger quickies to satisfy audience demands. Many, many films adopted the name Django in their titles, though most (including one especially bizarre cult classic) had absolutely nothing to do with the coffin-toting, black-hatted stranger played

by Franco Nero in the original film.

One of the few films that actually does work as a genuine sequel is Django, Prepare a Coffin, an early western star role for Terence Hill. A former supporting player in costume films and dramas, Hill had just ascended to leading man status in some German Karl May oaters and more notably starring opposite Bud Spencer in 1967 with God Forgives... I Don't! (playing a character named Cat Stevens, incredibly enough). Of course, the pair would become a major box office team two years later with My Name Is Trinity and a host of other comedic western and crime films to come.

In this film Hill plays in a much darker and more vengeful mode than usual as Django, of course, this time a married, law-abiding citizen whose boss, councilman David Barry (The Cat o' Nine Tails' Frank), double crosses him while shepherding a gold shipment. Django's wife is murdered while he's away, and he's ambushed by a villainous gang led by the slimy, imposing Lucas (the hulking Eastman, years before Joe D'Amato films like The Grim Reaper and Absurd). Years later, Django takes a job as the town executioner as a cover up to thwart Barry and Lucas, who are sending innocent men to the gallows in a bid to steal their land. In actuality, Django's spiriting them away to form enough of a posse to get revenge and bring the bad guys to justice. However, a traitor in their midst forces him to rethink his strategy as things ramp up to a violent climax.

A straightforward tale of revenge with lots of bullets 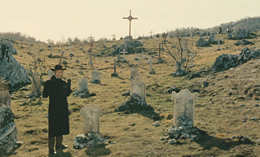 and explosions during the third act, this is an above-average western offering with a fascinating cast. It's always interesting to see Hill playing it straight, and when he cuts loose during the two big set pieces involving a barrel of explosives and an eerie graveyard, he's about as far fr 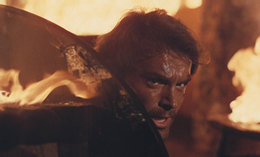 om his usual goofball persona as you could imagine. Eastman also scores in his villainous role, laying the groundwork for his more sadistic turns to come in films like Mario Bava's Rabid Dogs and the aforementioned D'Amato films, most of which cast him as a lumbering monster. Interestingly, this is as much of a riff on Sergio Leone as the original Django, with titles clearly emulating the formula of the Dollars films and Gianfranco Reverberi's score (which might sound a little familiar to Gnarls Barkley fans) fitting right in with the Ennio Morricone style of the time. Of course, director Ferndinando Baldi already knew his way around a solid western thanks to Texas Adios; his later filmography would get much stranger, however, with films like Blindman, Get Mean, the 3-D twofer of Treasure of the Four Crowns and Comin' at Ya!, and the super-sleazy Terror Express.

Like most of its peers, Django, Prepare a Coffin (which was also exported widely under the title Viva Django) was shot with English as the primary target audience; most of the actors were clearly speaking it during filming and dubbed in accurately in post production, though the Italian language track is also very good. After the success of the two Trinity films, the film was supposedly reissued in a completely different edit as a comedy(!), most widely in Germany; this variant doesn't seem to be available on home video, which might be a good thing.

The first English-friendly DVD of this film came from King Records in Japan, courtesy of a non-anamorphic uncut transfer with optional Japanese subtitles. A subsequent, superior anamorphic edition was created for the Italian release (with no English options) and the German DVD, which contains the German and English audio tracks and a condensed, German-only Super 8 version. At the beginning of 2013, the UK DVD release from Arrow (marketed as part of their Cult Arena DVD line and cannily timed to coincide with the release of Quentin Tarantino's Django Unchained) featured a solid anamorphic transfer (which looks similar to the Italian one and, like the other ones, framed at 1.75:1) along with both the English and Italian audio (in original mono) with optional English subtitles. Either version works just fine, though most will probably prefer the English one since it's in synch far more often. The original European export trailer (with English text) is also included; the final product also includes a liner notes booklet by Howard Hughes.

Six months later, a Blu-Ray edition appeared from a markedly different HD source, framed at 1.66:1 with a bit more vertical image information. Colors look more saturated and defined while detail boosts a bit; the black levels for some reason look a notch or two paler, so you may want to adjust your monitor to compensate. Detail levels look fine, though a bit of degraining appears to be in place (though nowhere close to the severity seen on many past Italian catalog titles, and thankfully devoid of any weird digital noise). Both language options are again present with optional English subs for both the English and Italian tracks (which can differ greatly), plus the trailer and liner notes; the new video extra here is an eight-minute HD video featurette with spaghetti western book author Kevin Grant, who breaks down the Django mythos and discusses this film's placement in the cycle. A solid, enjoyable film is what will likely be the best presentation for a long time to come.