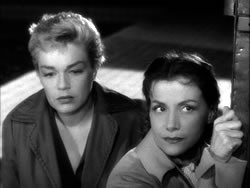 A benchmark horror film laced with heavy elements of film noir, Les diaboliques (better known as Diabolique in America) is arguably the most important genre film of the 1950s, a razor-sharp thriller that paved the way for Psycho and subsequent shock-driven films that remain popular today. Other filmmakers had certainly explored this territory before, most notably Val Lewton with films like Cat People and The Seventh Victim, but this was really the first time a director seemed out to cause full-on trauma in his audience. Today the gothic finale has been imitated so many times (particularly in dozens of gialli like the blatant The Night Evelyn Came Out of the Grave) that the initial punch has certainly been muted, but it's still an impeccably crafted film and one for the history books. 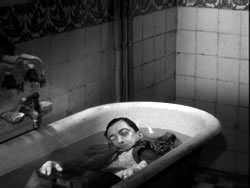 At a boarding school for boys on the outskirts of Paris, fragile financer and teacher Christina (Véra Clouzot, the director's wife who also worked with him on The Wages of Fear) lives under the thumb of her domineering, abusive husband, Michel (Army of Shadows' Meurisse), who is also the headmaster. He publicly humiliates her in front of the students and staff including another teacher, the much tougher Nicole (Room at the Top's Signoret), Michel's not particularly satisfied ex-mistress. Finally decided enough is enough, the two women conspire to lure Michel away from the school and drown him in a bathtub, then disposing of his body in the school's slime-covered swimming pool. However, when the body disappears after the pool is drained, Michel's suit mysterious appears from the dry cleaners, and students report sightings of the headmaster on the property, the two sympathetic killers begin to lose their bearings. 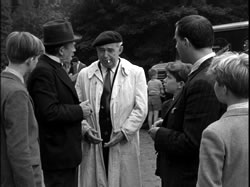 An incredibly craft film, Les diaboliques is the perfect combination of a crackerjack premise, three superb performances, and a director at his absolute peak before ill health made his future output far more erratic. The film played a large role in popularizing French cinema in countries like America and Great Britain, usually shortened to at least 107 minutes and sometimes down to 96. It was assumed to be public domain for several decades until the full uncut version was restored and issued from Criterion and various other companies in different countries, a salvation that also helped many other foreign films from the same era. Its legacy is certainly considerable as the story (based on a novel by Boileau-Narcejac, the team who also wrote the source novel for Vertigo and the screenplay for Eyes without a Face) was a strong factor in Hitchcock's decision to make Psycho (both to outdo Clouzot and the come up with an even more shocking scene of bathroom terror) and was also cheekily imitated by William Castle during the color sequence in The Tingler. It's also been remade, officially and unofficially, several times over the years including a surprisingly good John Badham made-for-TV version in 1974 (Reflections of Murder), Ira Levin's stage and screen versions of Deathtrap, and an ill-advised but occasionally interesting 1996 remake as Diabolique with Sharon Stone doing an odd Signoret imitation. Seen today, it's remarkable how bleak and unsparing the film is in its view of human nature; flagrant child mistreatment, domestic abuse, and infidelity are everyday occurrences in which everyone becomes complicit even by remaining passive. It's a dog-eat-dog world in Clouzot's universe, though the possibly supernatural grace note in the closing moments makes one wonder exactly who the top dog really is.

Any version of Diabolique available before Criterion's initial no-frills DVD in 1999 isn't worth mentioning; the company's restoration was a miracle at the time, as very few had seen the film in anything resembling a decent or complete print with English subtitles. Dual Blu-Ray versions were announced almost simultaneously in the US and UK, with the British release from Arrow (under their Arrow Academy banner) barely squeaking onto shelves in Europe a few weeks earlier. The Arrow version is dual-format with a DVD version included as well, but if you want a satisfying and film-like experience, opt for the 1080p presentation instead. Overall the presentation is very satisfying; the occasional effects of time and the film's somewhat inconsistent shooting style (in which some shots look a tad softer than others) will obviously never be overcome, but fans certainly won't be able to quibble about the transfer delivered here. The terrific audio commentary by Clouzot expert Susan Hayward (the University of Exter's film studies director) is carried over from their DVD as is the original trailer, while the Blu-Ray adds on a solid half-hour discussion of the film with French critic Ginette Vincendeau along with a booklet containing liner notes by Brad Stevens, an overview of poster art, and a reprint of Paul Schrader's interview with Clouzot.

The Criterion reissue (also ported over onto a new DVD as well) sports a very similar transfer, though oddly, it reveals some additional slivers of information along the edges compared to the Arrow release and thus has a bit more breathing room compositionally speaking. It isn't something that will leap out to most viewers without a side-by-side comparison, but if you have to pick only one, the Criterion wins fromt his standpoint. Apart from the shared trailer, the Criterion has wholly different extras including a new selected-scene audio commentary with French film scholar Kelley Conway (which focuses almost entirely on Clouzot and could have been longer, but what's here is worthwhile), a video discussions with director Serge Bromberg (one of the directors of the fascinating Henri-Georges Clouzot's Inferno, a documentary about his most famous collapsed project), and a more horror-oriented discussion with writer Kim Newman about the film's influence on psycho-thrillers for the following decade or so. The booklet contains some excellent liner notes by Terrence Rafferty, who offers a useful guide through Clouzot's filmmaking career and offers a useful explanation of why his reputation was temporarily sullied by the arrival of the French New Wave. Both versions are highly recommended for very different reasons, so judge your spending decisions accordingly.