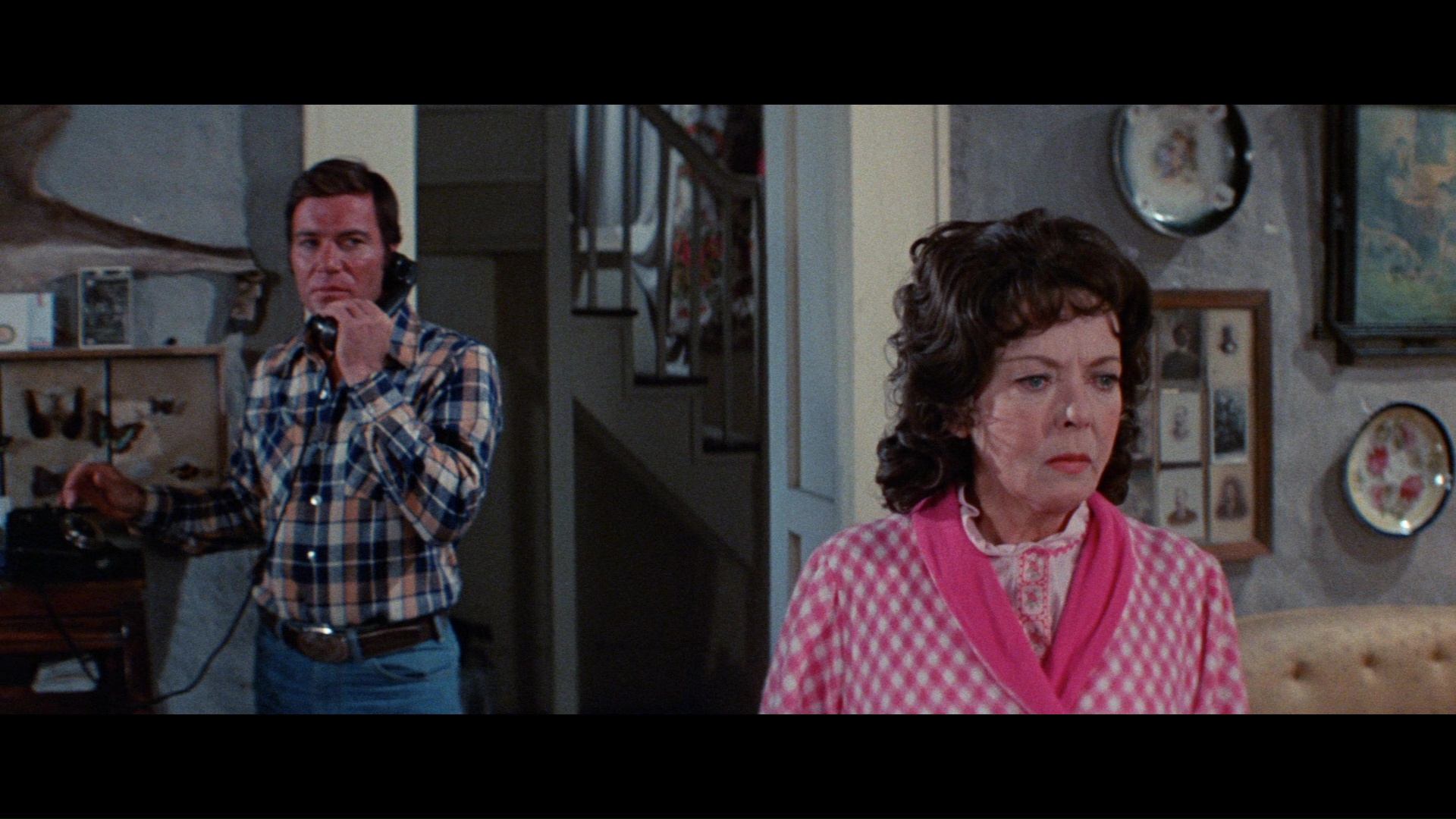 the wonders of movie salesmanship.

Thanks to a completely wacko cast and a finale touted in the ads as "absolutely the most horrifying ending of any motion picture ever," The Devil's Rain became a familiar staple in U.S. drive-ins and on late-night TV. Not surprisingly, a bit part by John Travolta (as "Danny") before he became the world's most famous Sweathog helped this one milk out even more bucks through endless reissues, and on some venues he even supposedly got top billing (a la Brooke Shields in Alice, Sweet Alice). Even today, many horror fans still feel nostalgic about this shaggy little beast of a film, which marked a rare American outing for British director Robert Fuest (best known for the TV series The Avengers and the Dr. Phibes films with Vincent Price).

The surreal, often disjointed plot kicks off rather atmospherically in mid-drama as Mrs. Preston (Lupino) panics during a rainstorm following a dreadful nightmare about her husband, who has gone missing. Her son (Shatner) tries to reassure her, but that doesn't do much good when the family patriarch shows up with a dripping, gooey, eyeless face at the door, mutter a Satanic chant, and falls down dead. Turns out the Preston family has been targeted by relentless cult leader Jonathan Corbis (Borgnine), who is determined to recover a book containing the names of souls belonging to Satan (now trapped in a large glassy, water-filled container, "The Devil's Rain"). However, the search for Corbis does not go as planned, and soon the other Preston son, Tom (Skerritt), is on the hunt as well with his wife, Julie (Prather), and a wise professor (Albert). Corbis' evil ultimately pays its price in the infamous, lengthy finale, which features most of the cult members reduced to mounds of 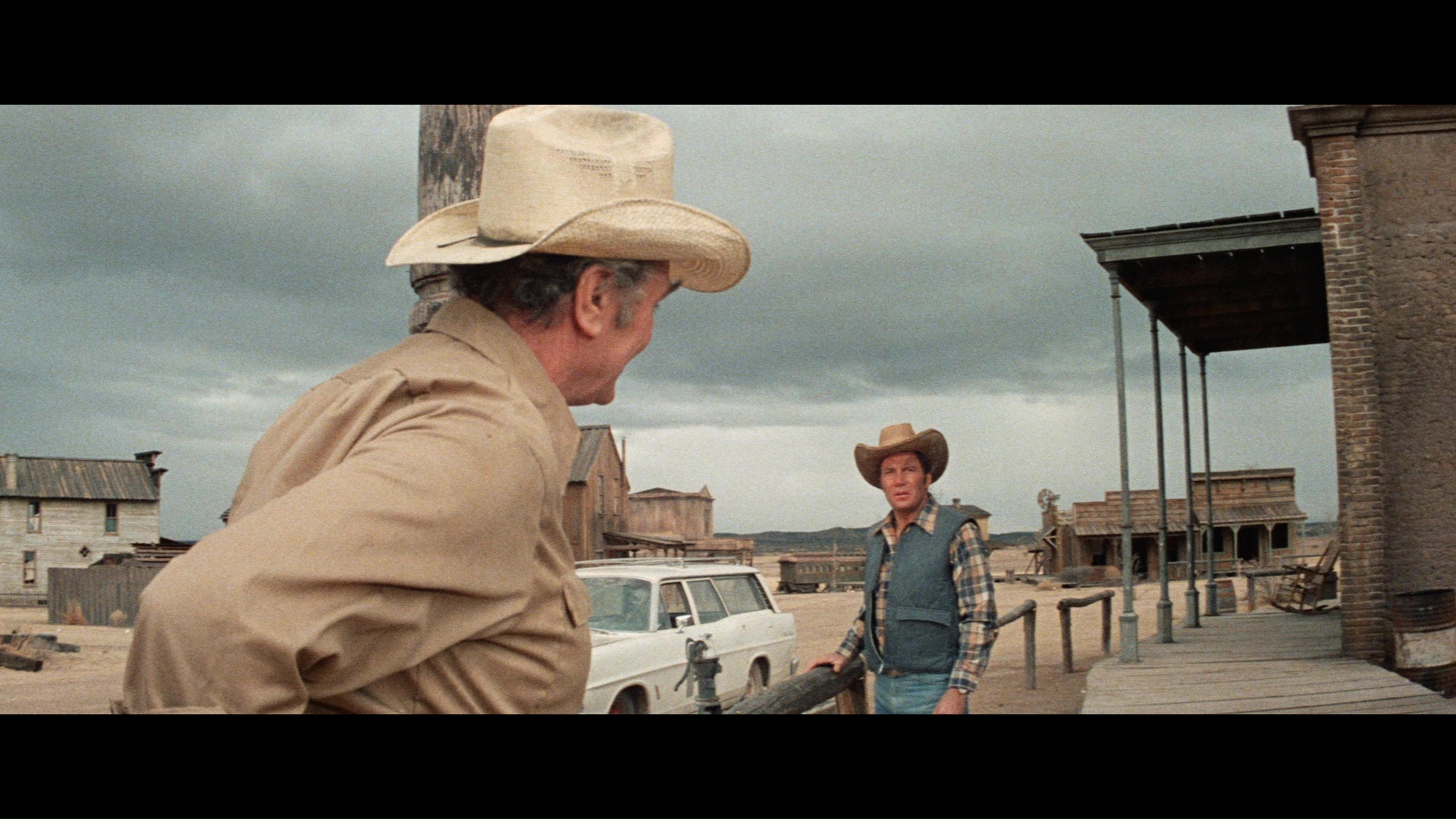 slimy goo (not much of a plot spoiler since this scene was splashed all over the posters and video art.) 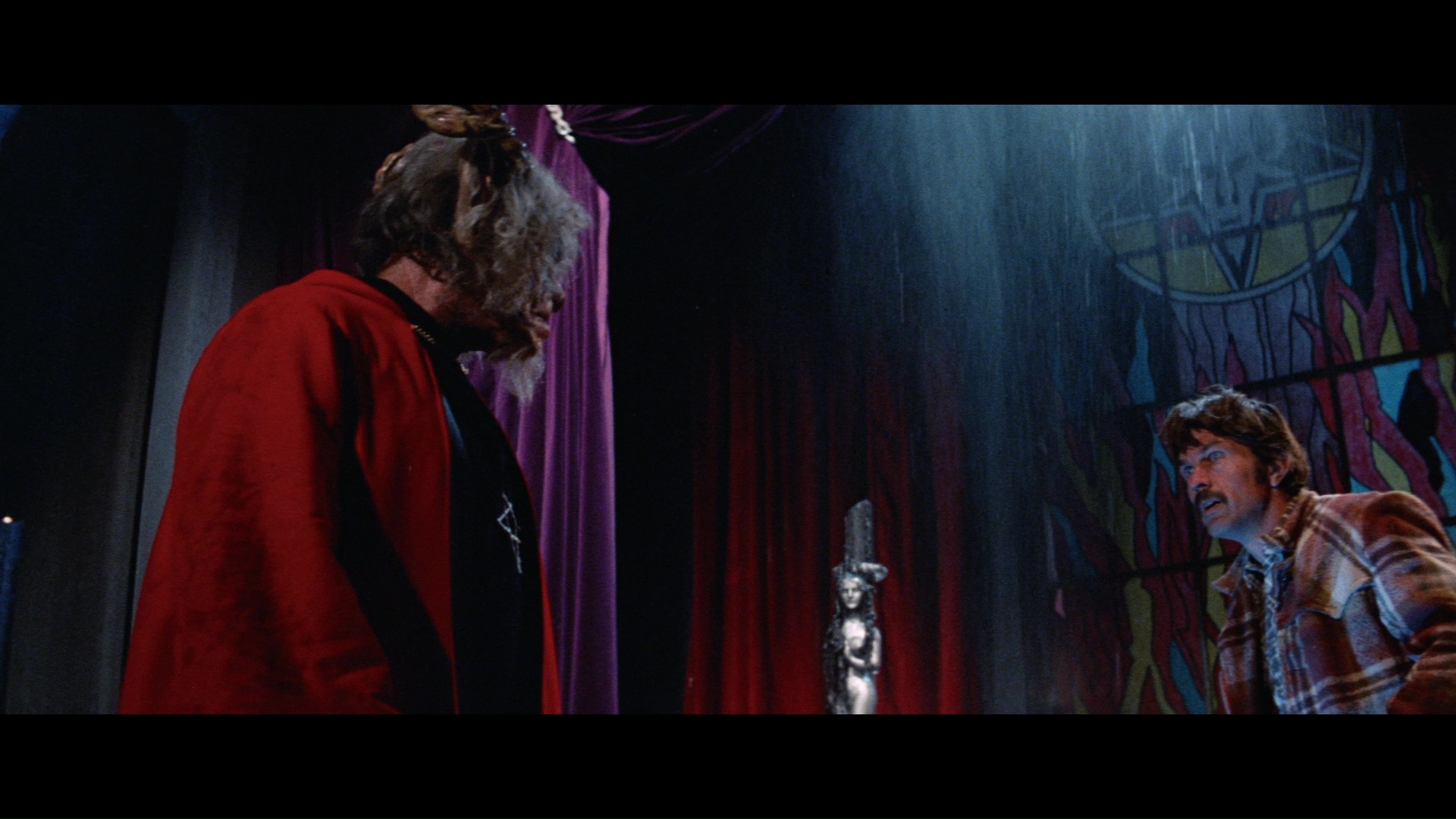 Sporting amusingly weird and colorful special effects, The Devil's Rain isn't exactly an epic work of pioneering horror, but it does kill an hour and a half rather nicely. Unintentional pop culture strangeness abounds; watch for Travolta yelping "Blasphemer! Blashphemer!" and having his face dribble off - does the Church of Scientology know about this one? - and Borgnine even metamorphoses into a goofy-looking ram (complete with horns). Even the founder of the Church of Satan and author of The Satanic Bible, Anton LaVey, puts in an appearance as a cultist and served as a consultant on the film (a service he also performed on The Car, another favorite). Wild stuff, to be sure, and not unlike another fun '70s desert horror vehicle with Shatner, Kingdom of the Spiders; oddly, both films boast extremely horrific imagery but managed to squeak by with PG ratings. Ah, the good old days. Fuest keeps the proceedings moving along nicely, though as he himself admits, the effects scenes tend to linger quite a bit longer than necessary.

After suffering for years in horrendous pan-and-scan prints, The Devil's Rain first got the widescreen treatment courtesy of VCI in 2001 in a nice-looking but non-anamorphic DVD, cropped a bit in its framing to about 1.95:1. The evocative scope photography (in Todd-AO - how often do you see that on a horror movie?) makes excellent use of shadows and weird 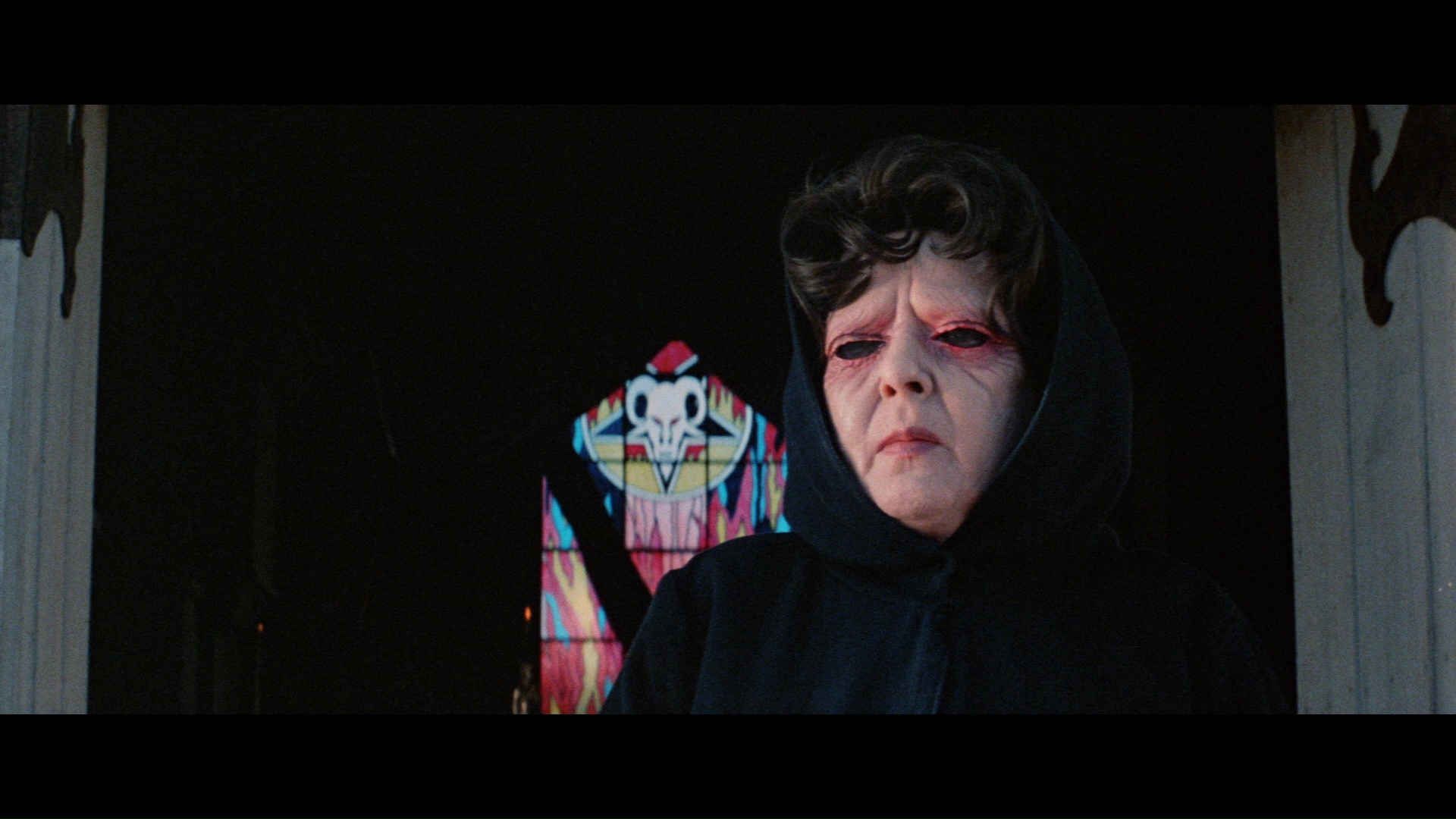 spatial compositions, though most general circulating prints were chopped off to 1.85:1. The VCI disc also includes a brief photo gallery and a tacky U.S. video trailer that spoils the entire story. 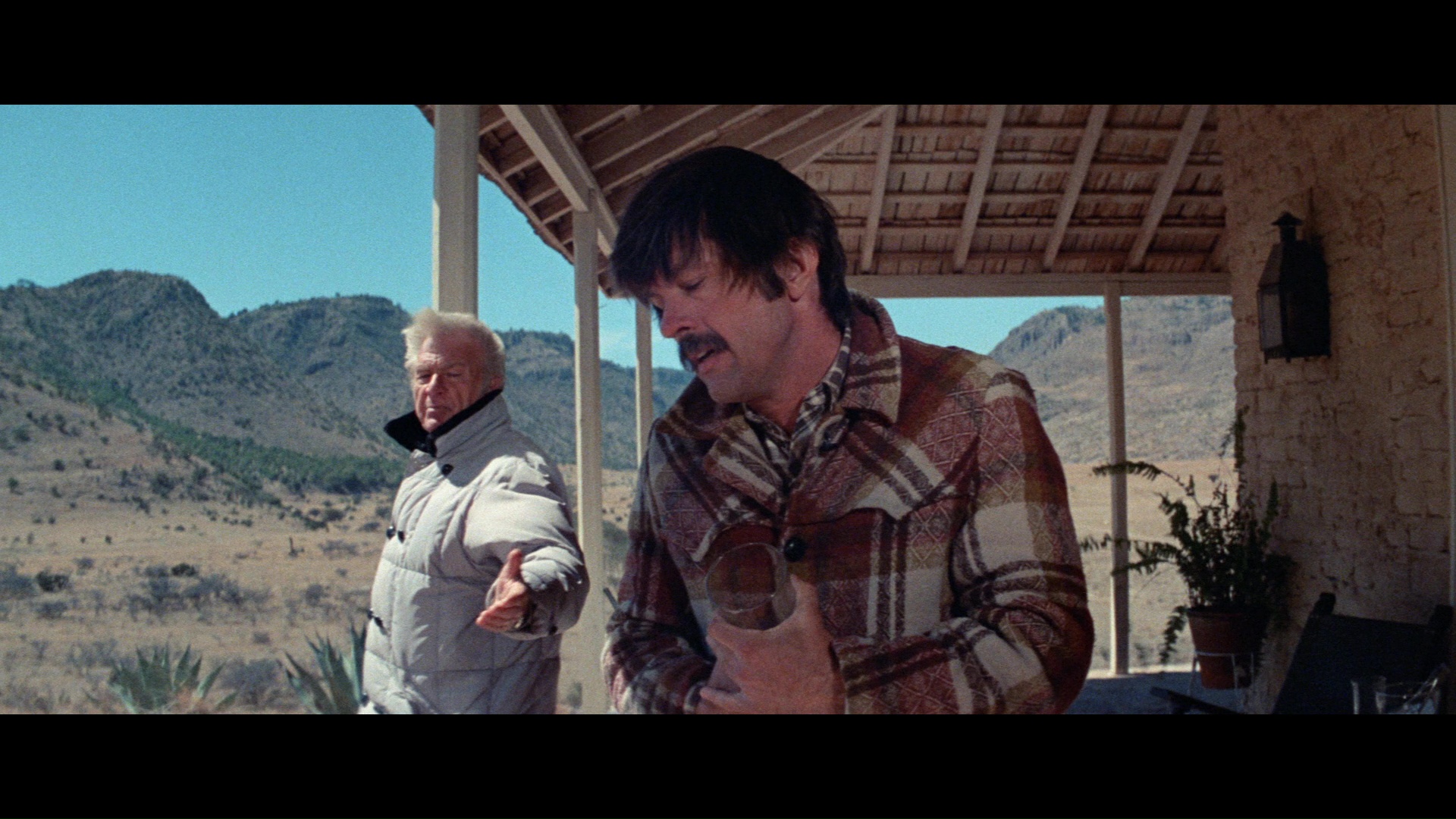 Dark Sky's 2006 anamorphic upgrade restores the entire 2.35:1 framing and looks more vivid, thanks to being sourced from a more recent hi-def transfer. Color and detail level look improved throughout, though some of the artistic choices get pretty odd with more clarity; for example, Lupino's backseat car attack on Prather would have been quite frightening except that it takes place in broad daylight, where every flaw in her make-up stands out like a sore thumb. The extras are easily worth the spin as well, kicking off with Robert Fuest's lively commentary track. He discusses most of his career from his early production design days through his most famous titles, discussing the actors along the way and even debunking Cinefantastique's claim that he suffered a breakdown after shooting this film. Also included is the unforgettable theatrical trailer (much better than that VCI one) that includes some great '70s paintings, three radio spots, and a brief (34-second) B&W newsreel clip of LaVey in action.

In 2017, Severin Films gave the film a welcome HD upgrade with a Blu-ray release (and separate DVD reissue) with a multitude of options including a limited slipcover, a Corbis pendant, and a bundle with Beyond the Seventh Door. The new transfer looks very impressive if you're familiar with the look of this film; it has that scruffy '70s look it's always had, but the jump in detail 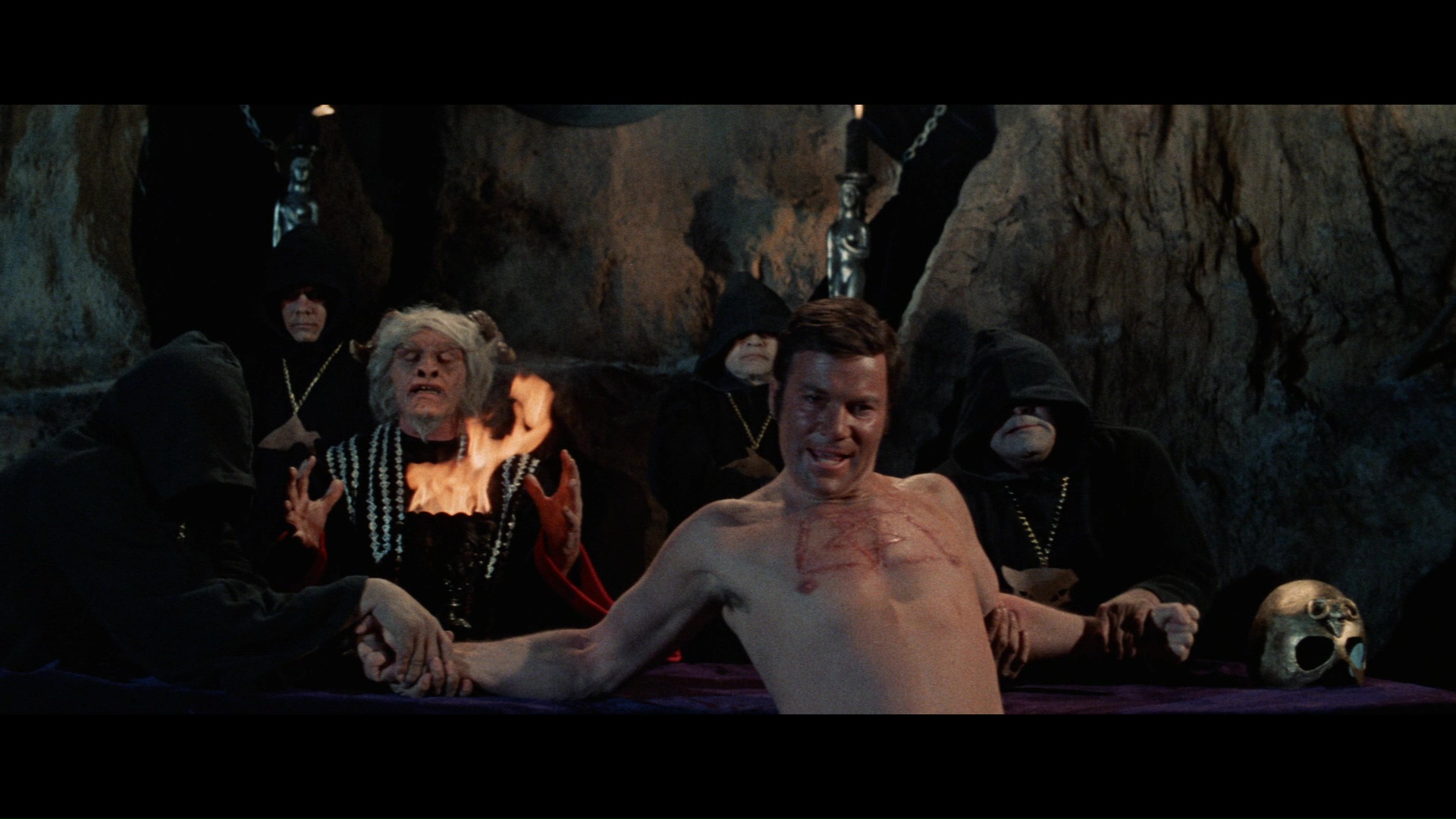 is substantial and the vivid colors, especially those blazing reds, are now resolved far better than NTSC could have ever handled. A few flaws that have been baked into 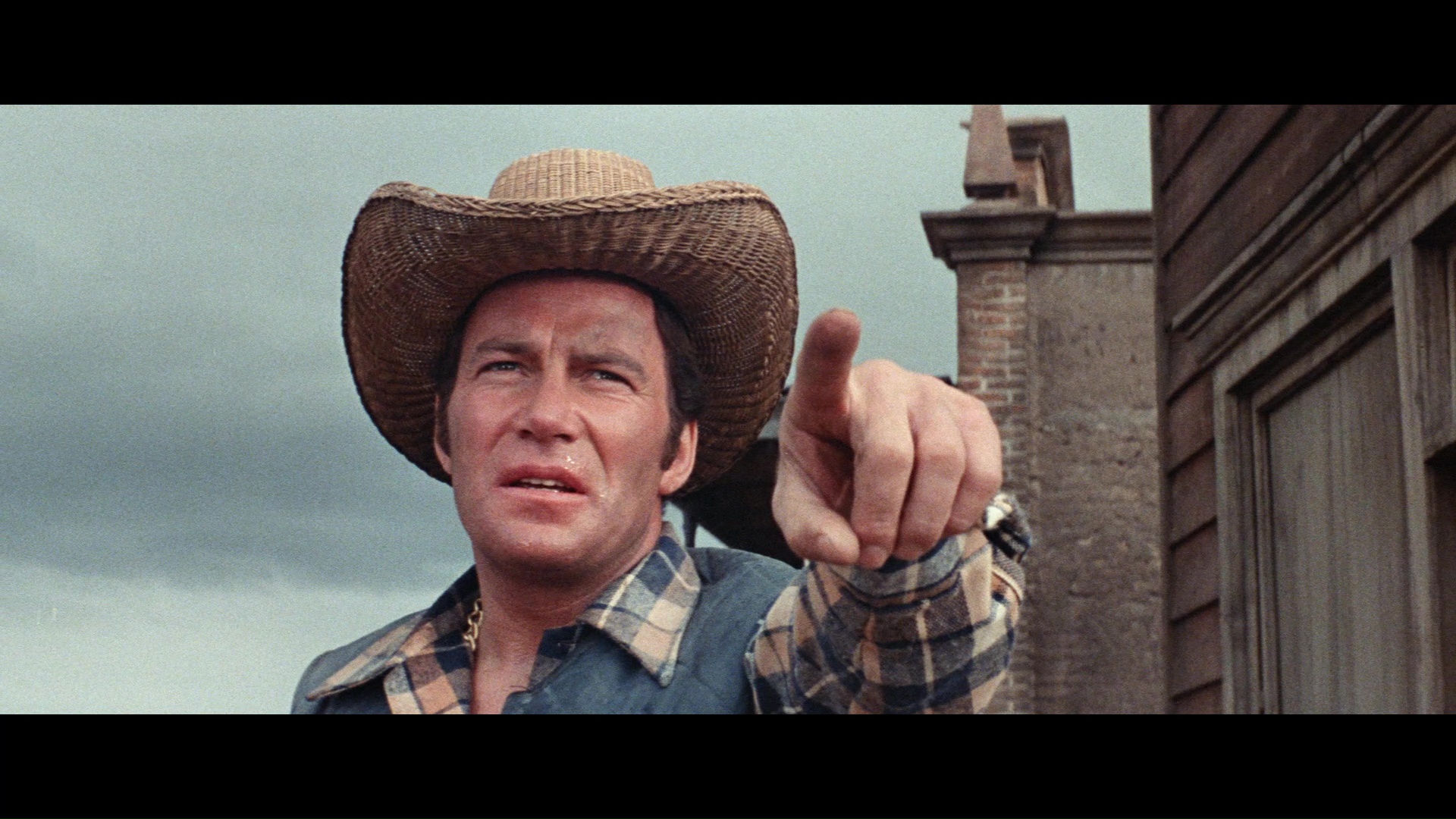 the film's opticals are still here, most notably that blue scratch that was apparently part of the printing process to create the main title card. The standard English track sounds quite good for such a fairly basic track, and optional English SDH subtitles are provided along with Spanish and French dubs (also DTS-HD MA mono).

Both the Fuest commentary and theatrical trailer are ported over here, but a ton of new material has been added as well kicking off with a new interview with Skerritt, "Confessions of Tom" (10m59s). Touching on his early acting (and writing) days involving Robert Altman and Robert Redford, it's a solid chat with the underrated actor including quite a bit about this film's Mexico shoot and the "campy" improvisational touches added during production that had to be largely reshot for two days to tone down the humor. (Don't miss the outtakes over the end credits, too!) In "The Devil's Make-up (5m5s), legendary effects artist Tom Burman (Cat People, Invasion of the Body Snatchers) recalls the process of creating a multi-color melt fest for the climax with the aid of props like sex shop dolls and working with his brother Ellis on Borgnine's most devilish appearance. An archival interview with 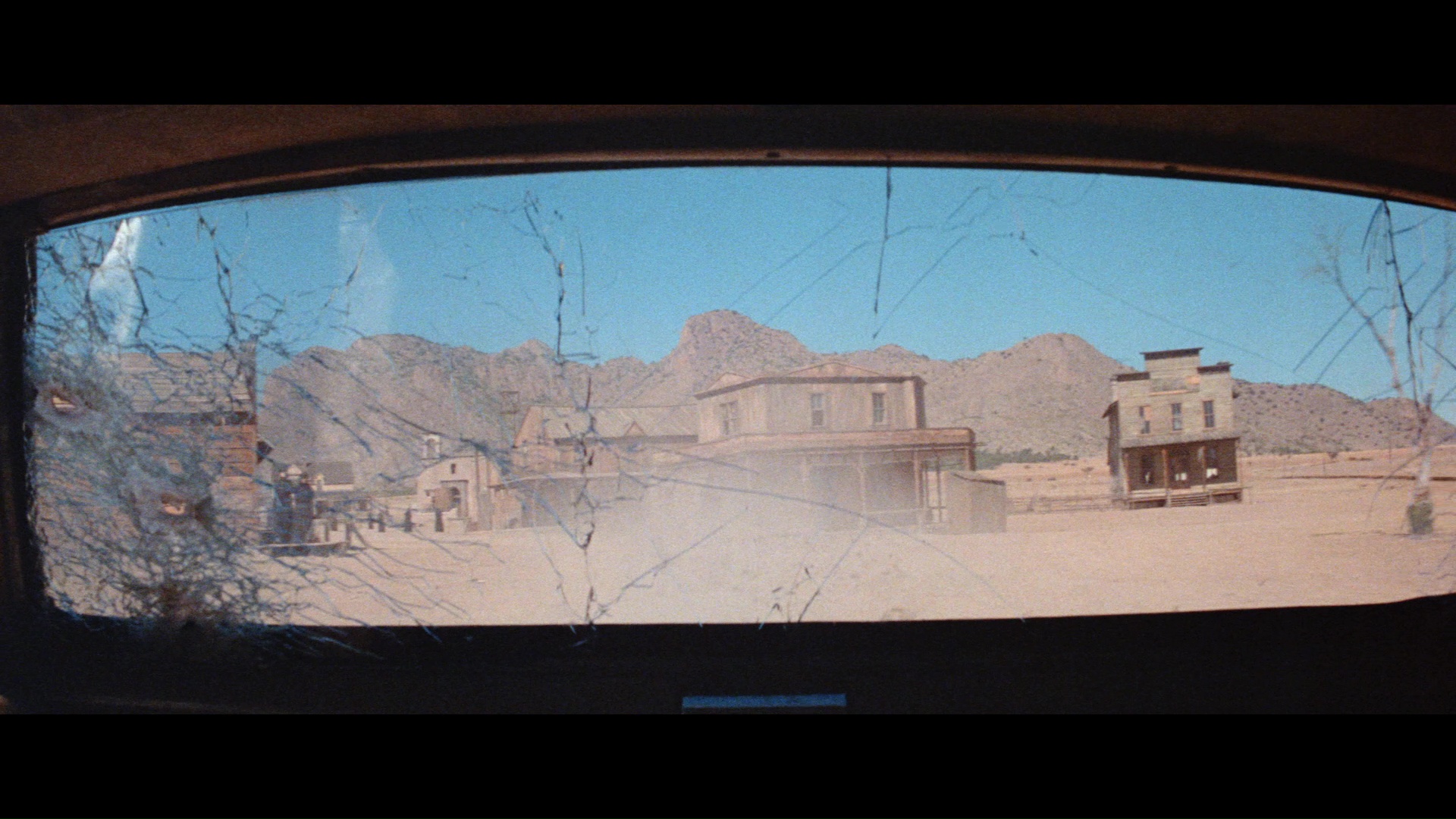 Shatner from around the same time (3m47s) opens with discussion of a Star Trek feature, including reticence about what he perceives as a possible "step back," and touches on some of the colorful made-for-TV films he was making along with a quick mention of this title. Filmmaker and horror collector Daniel Roebuck (Cavegirl) relates his 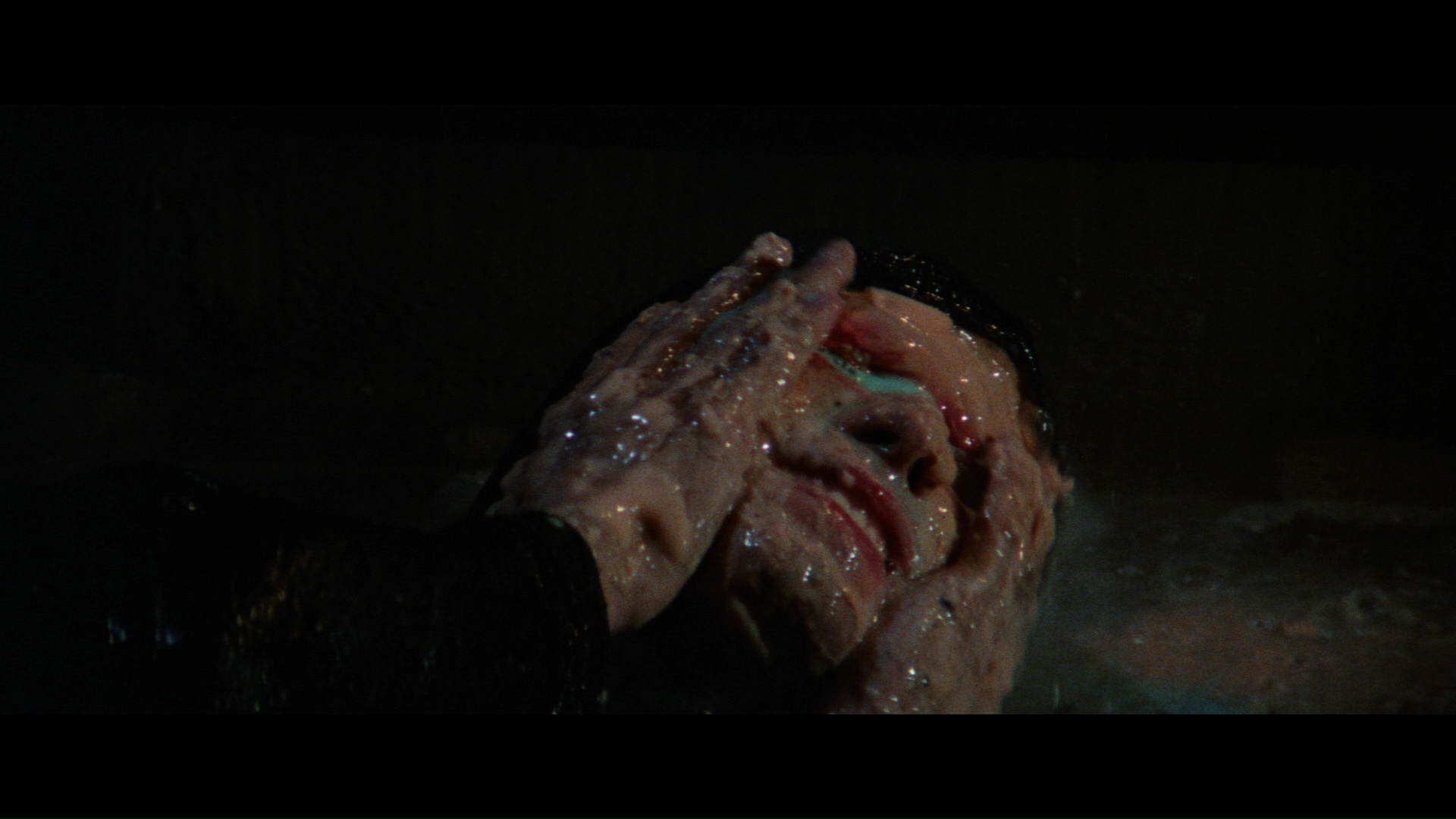 own "extraordinary" (and very funny) story (10m33s) about encountering this film in '75 at a tender young age with his mother jumping into action to get him a "free gift" when the feature opened. Script supervisor Ana Maria Quintana appears next for "First Stop Durango" (14m47s), enthusiastically explaining how she got her first gig on this film by taking some initiative and fortunately being able to work with the Spanish-speaking crew. She also describes noted producer Sandy Howard (A Man Called Horse) as "charm galore," which helped for the sometimes remote shoot even when she messed up once by forgetting the script! Fortunately she went on to a very successful Hollywood career for the likes of Steven Spielberg and Sam Mendes. On a very different note, "Consulting With the Devil" (10m17s) features Peter H. Gilmore and Peggy Nadramia, the current High Priest and Priestess of the Church of Satan, recounting how LaVey became involved basically as a publicity stunt to consult on the rituals, and he found the resulting script and finished film a bit stupid even if he had fun watching the creation of the 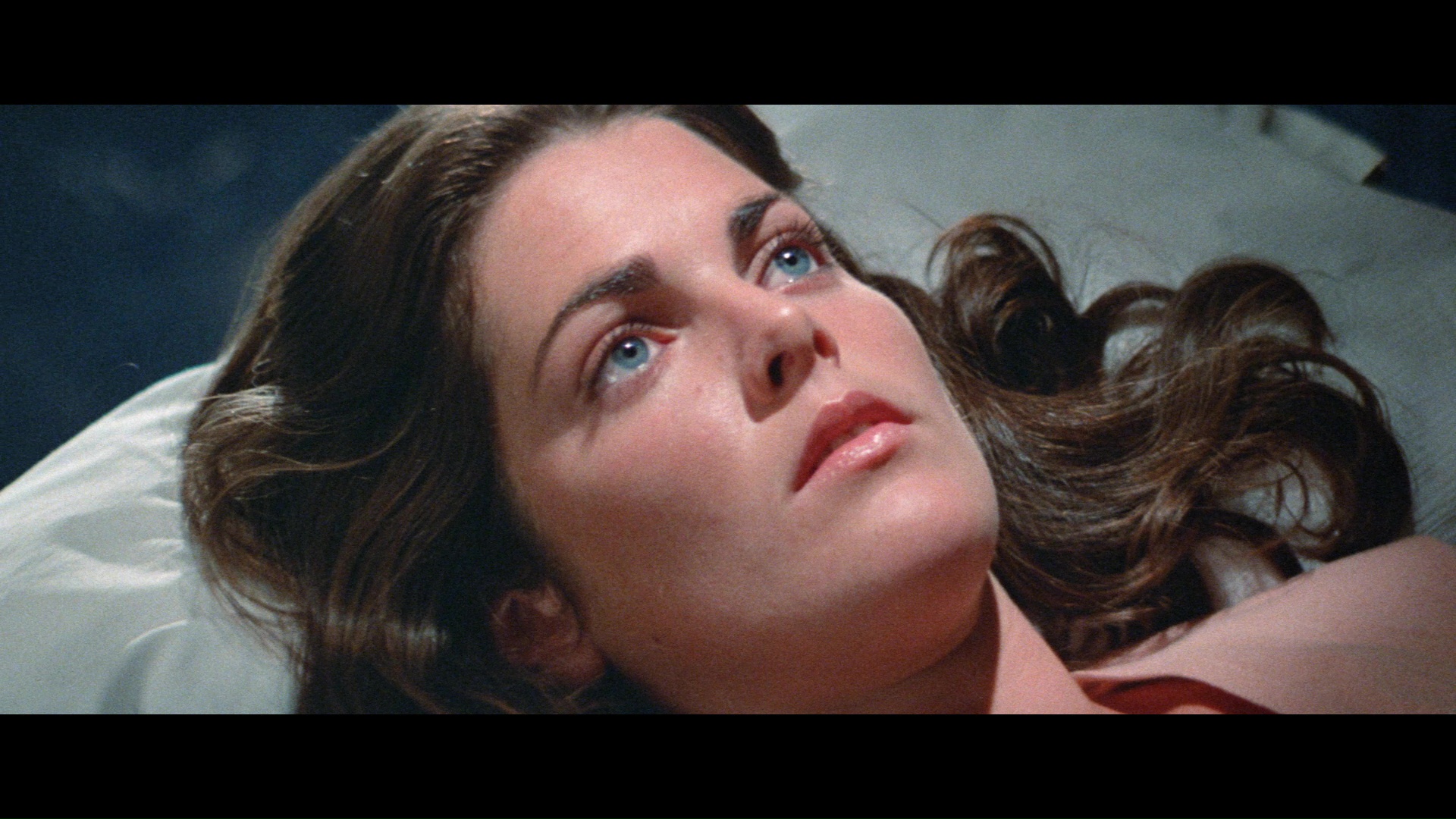 horrific special effects. More LaVey material can be found in "Hail Satan!" (8m4s) with Blanche Barton, author of the biography The Secret Life of a Satanist, telling stories about her 13 years with the Church of Satan leader and the evolution of its practices as well as LaVey's tangential involvement in Fuest's earlier The Abominable Dr. Phibes. Though he greatly enjoyed most of the actors, apparently Shatner was a little annoyed by all the press attention given the LaVey instead. (Also, John Travolta apparently does a mean Marilyn Monroe impression.) Finally the disc closes out with a gallery of location Polaroids (7m57s) (complete with tons of radio spots), a poster and still gallery, and three TV spots. 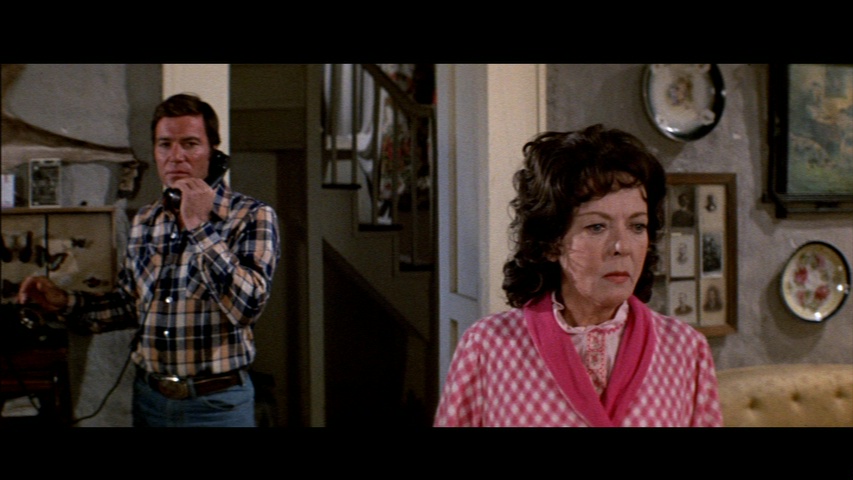 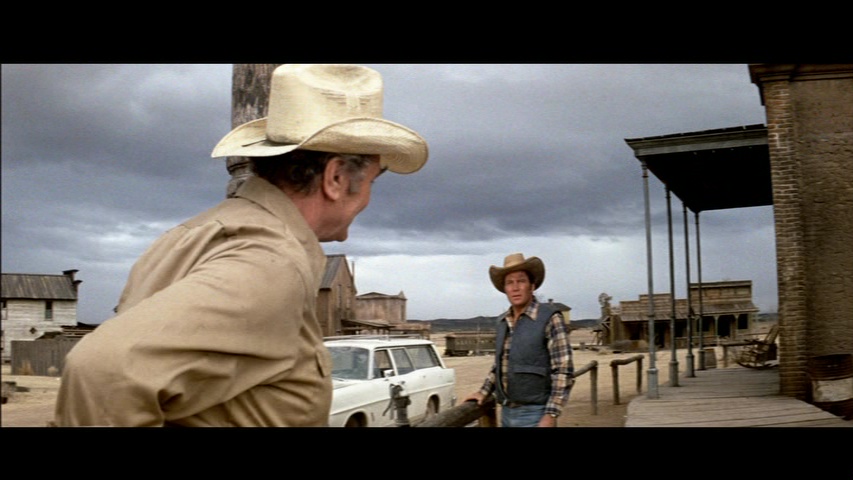 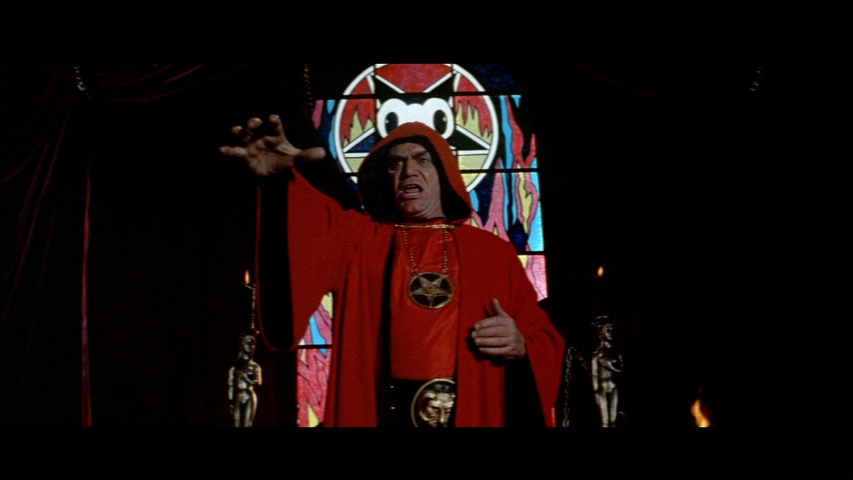 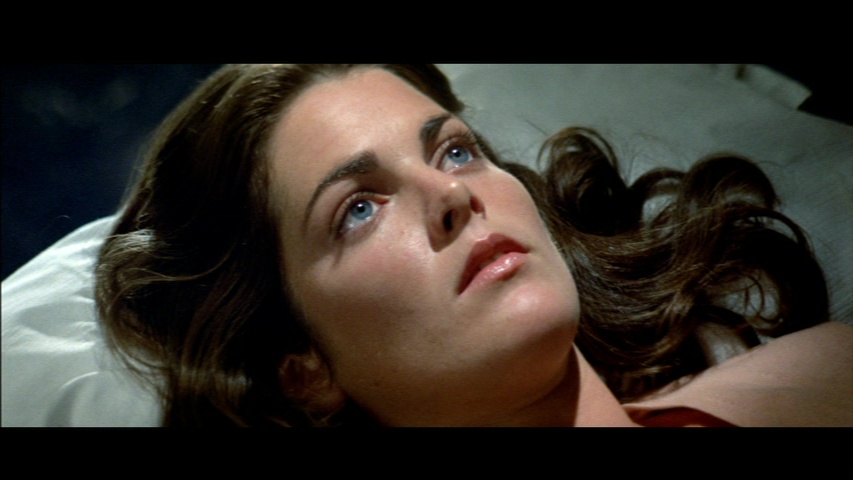 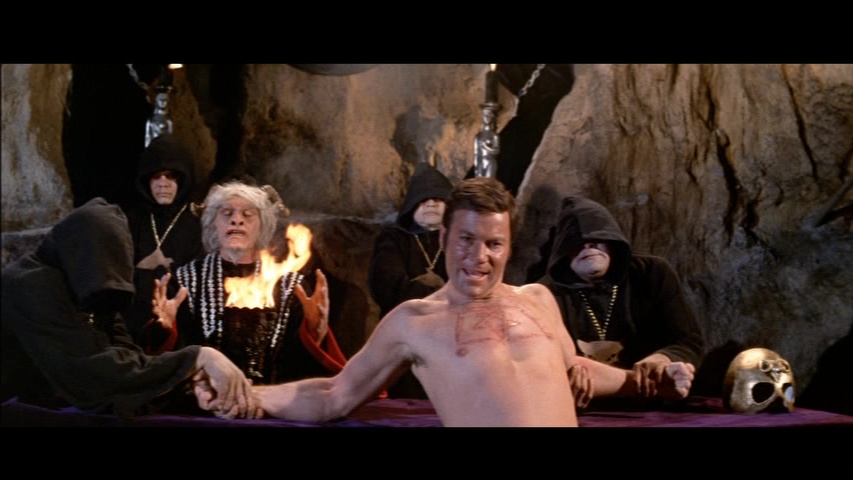