Ah, what a year 1978 was, providing viewers with not one but two monster dog movies. On the big screen you had the antics of Zoltan, Dracula's Dog, while TV viewers could satisfy their canine fix with Devil Dog: Hound of Hell, an all-star offering from Curtis Harrington. 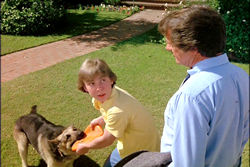 A drive-in vet thanks to films like What's the Matter with Helen?, Harrington became quite the made-for-TV specialist in the mid-1970s (including the not dissimilar Cat Creature) and often injected his cathode romps with a sense of old-school fun that set them a cut above the rest. Not surprisingly, Devil Dog is among the most memorable of his films from this period and still holds up as an outrageous mixture of the devil-worship and nature-amuck cycles popular at the time.

The film centers around the hardships endured 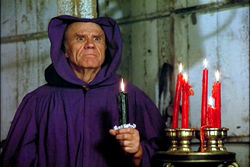 by the Barry family, whose dog has just died. The parents (Crenna and Mimieux) and kids (Escape from Witch Mountain tykes Richards and Eisenmann) cope with their grief by taking in a new German Shepherd puppy, who has unfortunately just been spawned by the local satanic cult down the street (led by Martine Beswick!). As the pup grows up, the family begins to fall apart; dad considers self-mutilation, nosy neighbors and domestics meet horrible fates, mom turns into a nymphomaniac, and the kids start doing mysterious things in the attic. What's a nice suburban family to do?

Though the dog itself is given surprisingly little screen time (though it certainly gets its due at the end by sprouting horns and some kind of frilly neckwear), Devil Dog still packs in the thrills thanks to its game, wildly overqualified cast. Everyone plays the material perfectly straight, which of course makes the ridiculous antics even more enjoyable. But brace yourself... even more incredibly, Devil Dog is presented on DVD in a double-disc special edition with a sparkling new transfer! 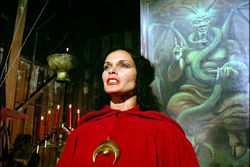 Disc one houses the feature itself along with a handful of other Shriek Show trailers (Frankenstein's Bloody Terror, Just Before Dawn, The Being, etc.). The real goodies arrive on the second disc, which features a very colorful 15-minute audio interview with Harrington (who disparages the main feature and television in general to no end), a new promo trailer, a Beswick photo gallery and a nudity-obsessed 1986 Fangoria text interview, a Harrington filmography, and best of all, "To the Devil a Dog," an hour-plus featurette containing lengthy interviews with producer Jerry Zeitman (who wants to do a remake!), a very blonde Richards (who's drenched in a soft focus glow throughout), and Eisenmann, who seems to have the most realistic perspective on the film and also discusses his work on another made-for-TV project, Terror Out of the Sky. In a funny touch, small flames dance in the background every time someone speaks the title of the film. Ooga booga! Richards fans can find even more with the popular ex-tyke with a little resourceful Easter Egg hunting, too.