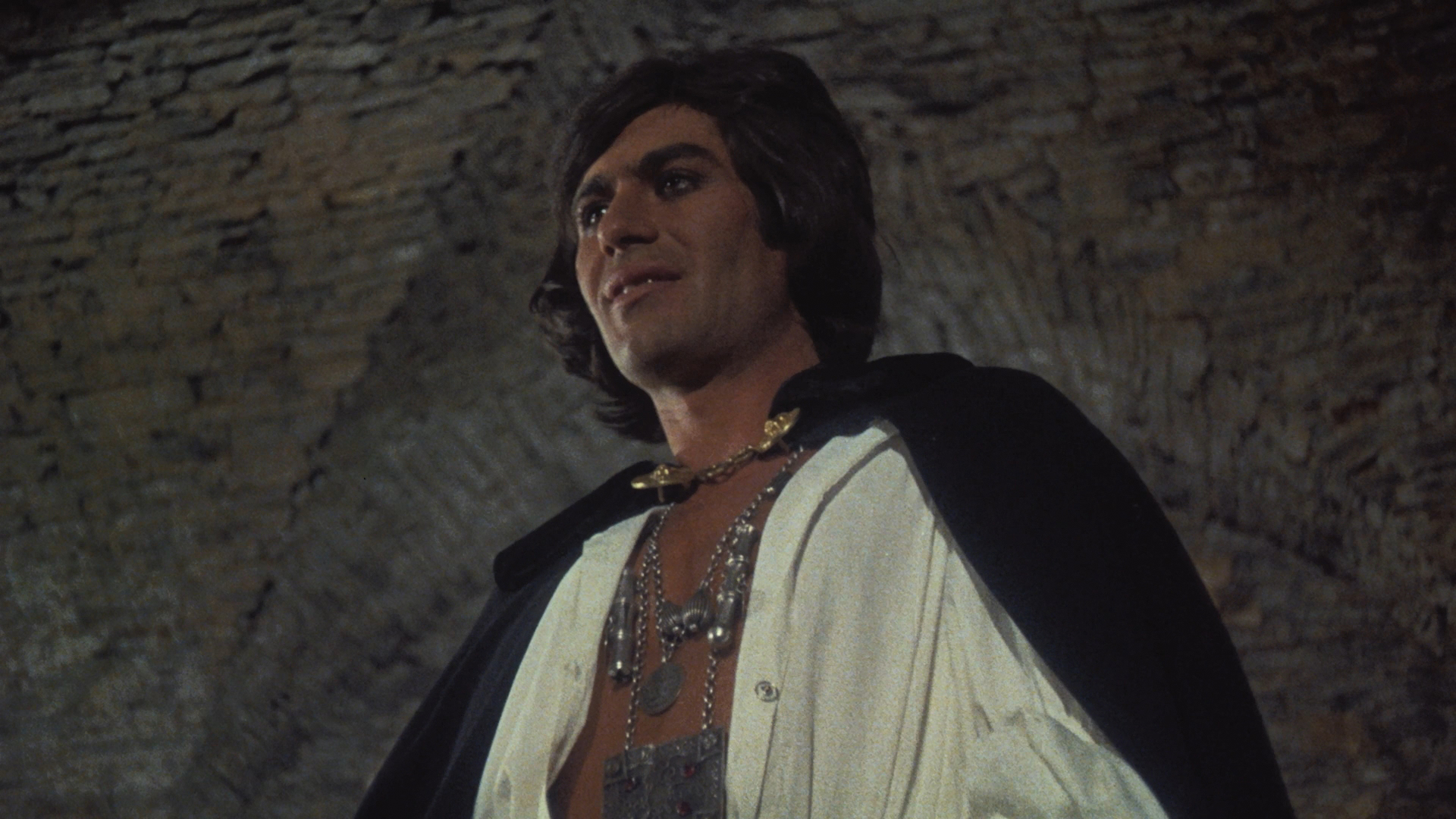 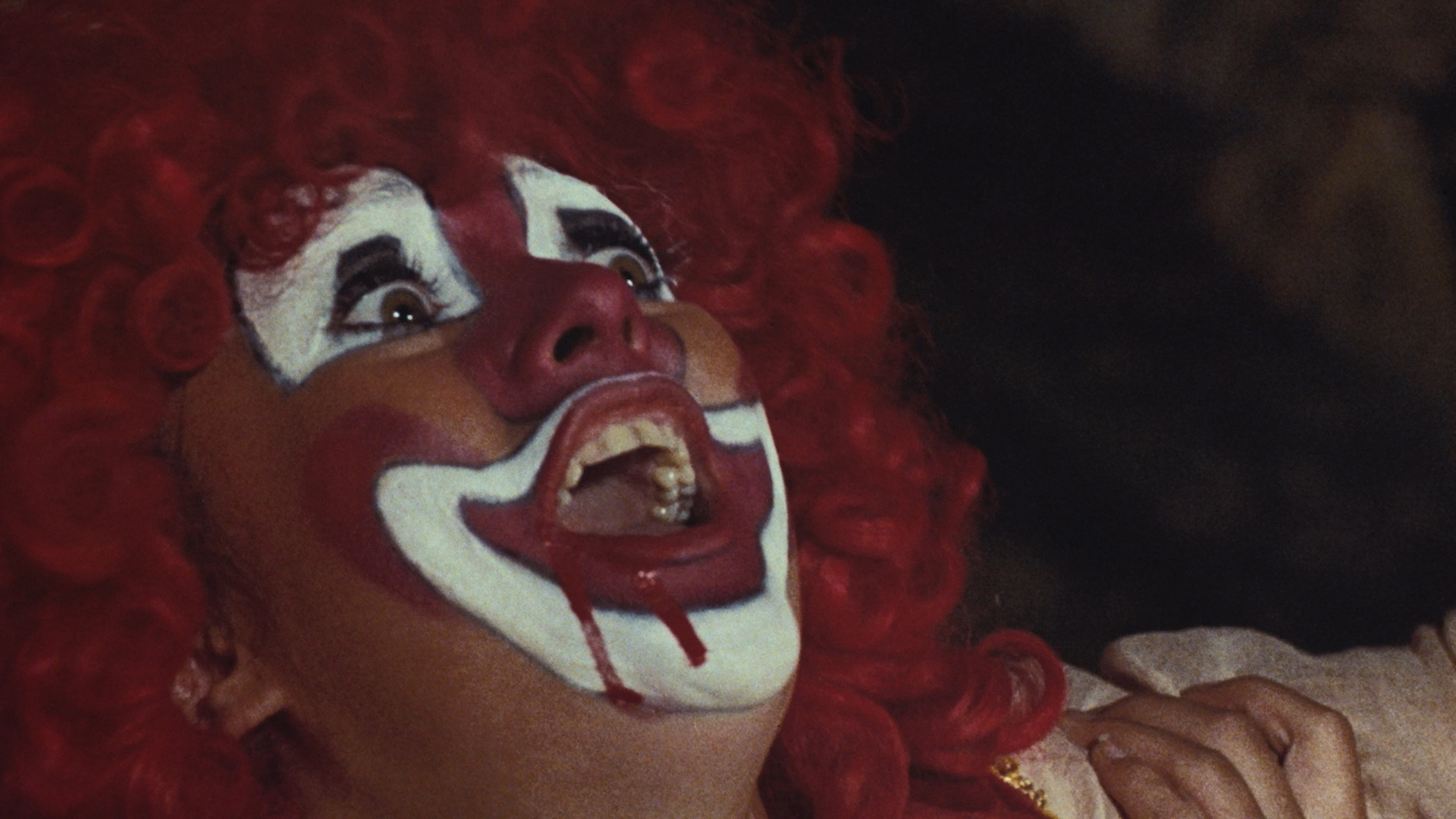 attempt to venture outside the parameters of his famous erotic vampire tableaux, The Demoniacs (Les demoniaques) finds him working with a stronger plot and assortment of characters than usual. In the memorable opening, a quartet of pirates led by the evil, hysterical Tina (Coeur) and a brutish Captain (Braque) lure a ship onto the rocks and molest two young girls who managed to flee from the wreckage. The young blonde victims are left for dead, but during a heavy night at the local tavern, one of the pirates experiences Macbeth-style visions of the beautiful maidens, their hands and eyes stigmatized with blood. He flees to Tina, who leads the wreckers back to the scene of their crime. The two girls are still there, barely alive, and escape to the haunted ruins of a church where a powerful spirit resides inside a cell. After meeting the spirit's handmaiden (a woman dressed as a clown, which makes no sense but looks very striking), the girls release him and engage in some sins of the flesh. In gratitude, the spirit grants them supernatural powers which, until dawn, will allow them to seek retribution against their attackers. The girls embark on their tragic quest, which culminates in a haunting and strangely poignant beach finale.

Like all of Rollin's films, the formal visual design plays an important role, and here he plays with the conventions of serials and pirate dramas (Fritz Lang's Moonfleet is an acknowledged influence, but traces of Jamaica Inn show up as well). The delightful opening features a voiceover introducing the characters over superimposed shots of the actors, a device indicating that Rollin will be venturing into slightly different territory. However, the expected nudity, violence, and bizarre imagery are still in rich supply, with 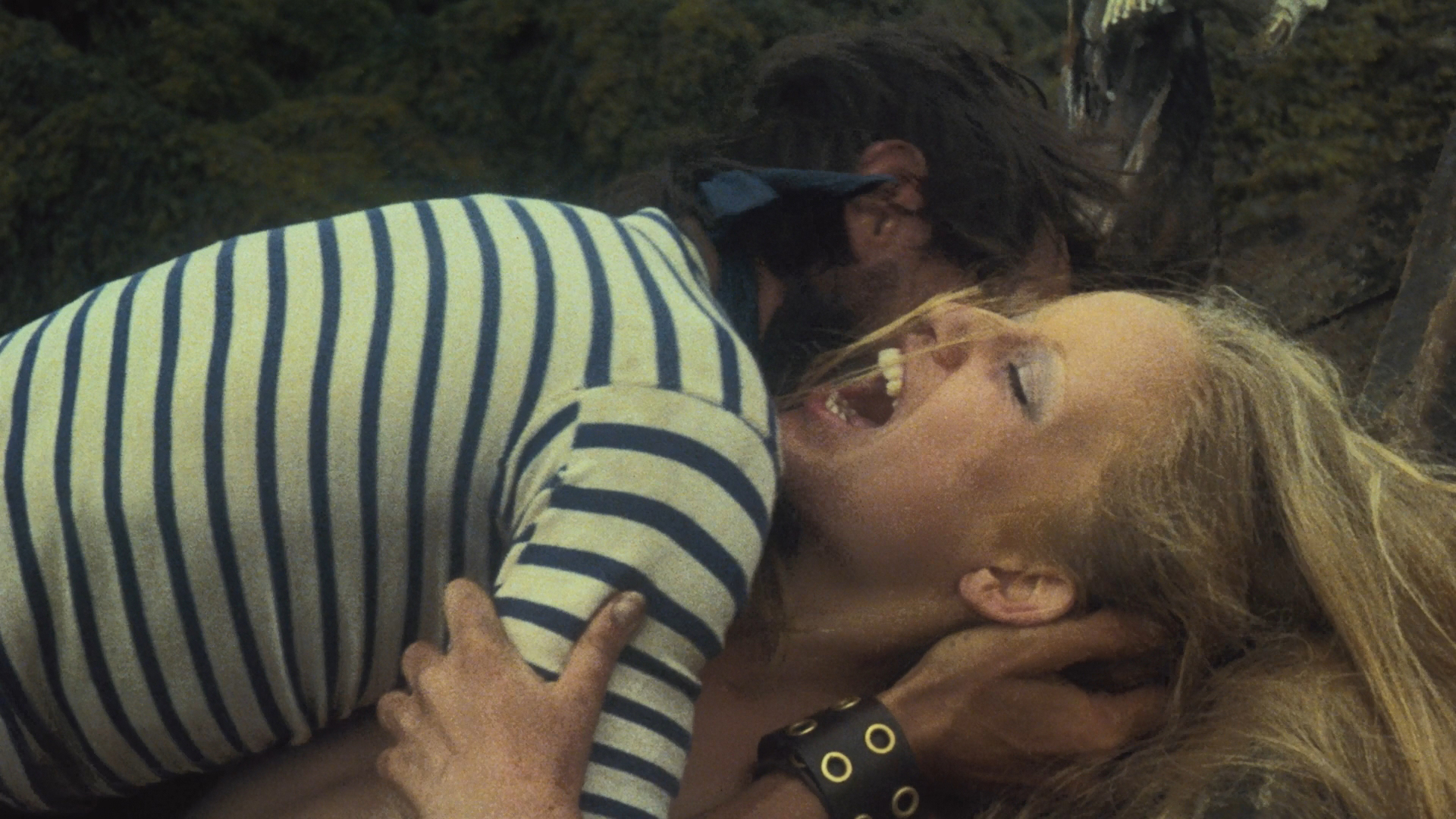 Rollin crafting some highly memorable sequences thanks to the eerie ruins and the strange beach scenery, punctured with the torn and 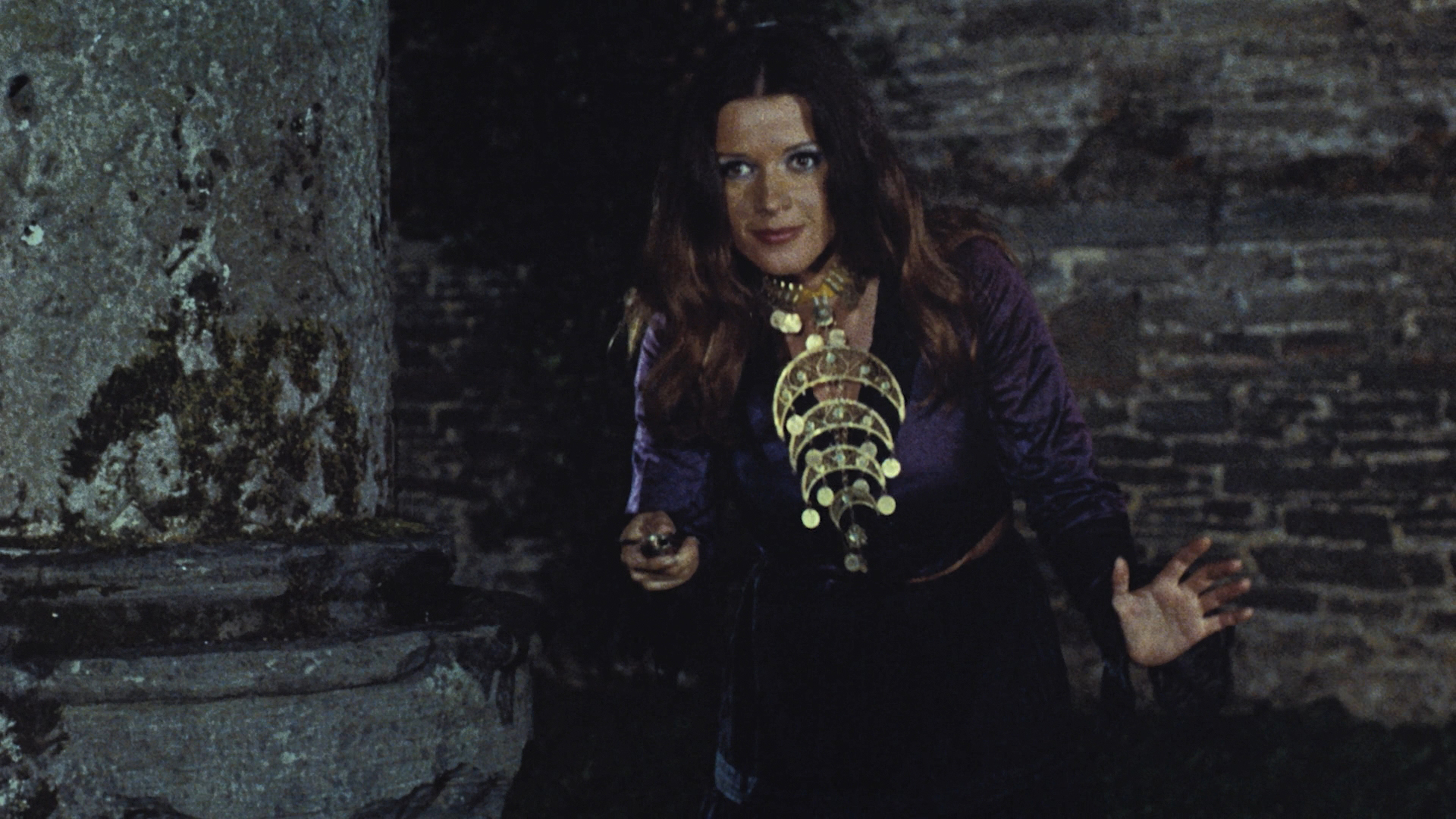 ragged wooden remains of crashed ships. The performers are also allowed opportunities to exhibit more personality than usual, with the villains making a memorable bunch, especially Tina's scene-stealing "kill them!" rants. Rollin's trademark visual fetish motifs are all present, including the mute blonde twins who were later turned up in various performer guises in Requiem for a Vampire, Phantasmes, and Two Orphan Vampires. A few moments are slightly spoiled by the rushed production, such as one strangely edited death in which a character's throat is slashed by falling on a ridiculously huge liquor bottle, but for the most part, this is a solid introduction to Rollin's style and a satisfying demonstration of his strengths as a director.

Rarely seen in English for decades but briefly released in a shortened version by Something Weird Video as Curse of the Living Dead, Demoniaques found most of its audience through blurry, bootleg SECAM-converted tapes. The eventual premiere DVD edition from Image and Redemption was a complete revelation. The source materials used here are absolutely immaculate, without any noticeable dirt or print damage whatsoever, and the color and detail quality are never less than striking. The mild 1.66:1 framing exposes all available picture information and looks ideally placed. The optional subtitles are always legible and well chosen, though for some reason the use of "merde" receives some amusing British euphemisms (e.g., "bloody hell!"). The original French trailer is also included. 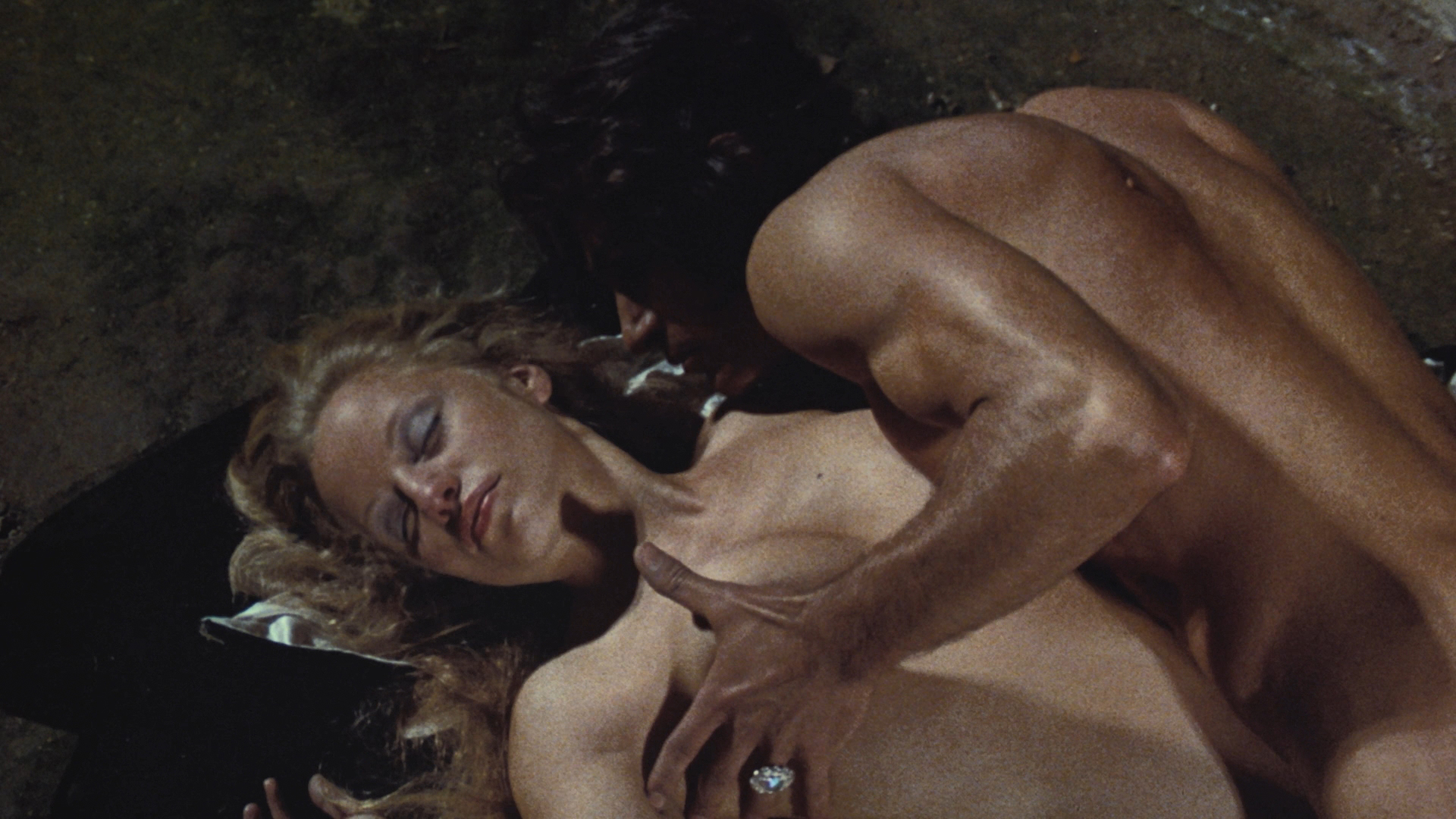 After that first American edition was discontinued, Rollin fans were given two reissues to contemplate. The triple-disc Encore edition is as lavish as their other Rollin treatments, packing in a new anamorphic transfer (framed slightly differently at 1.78:1, 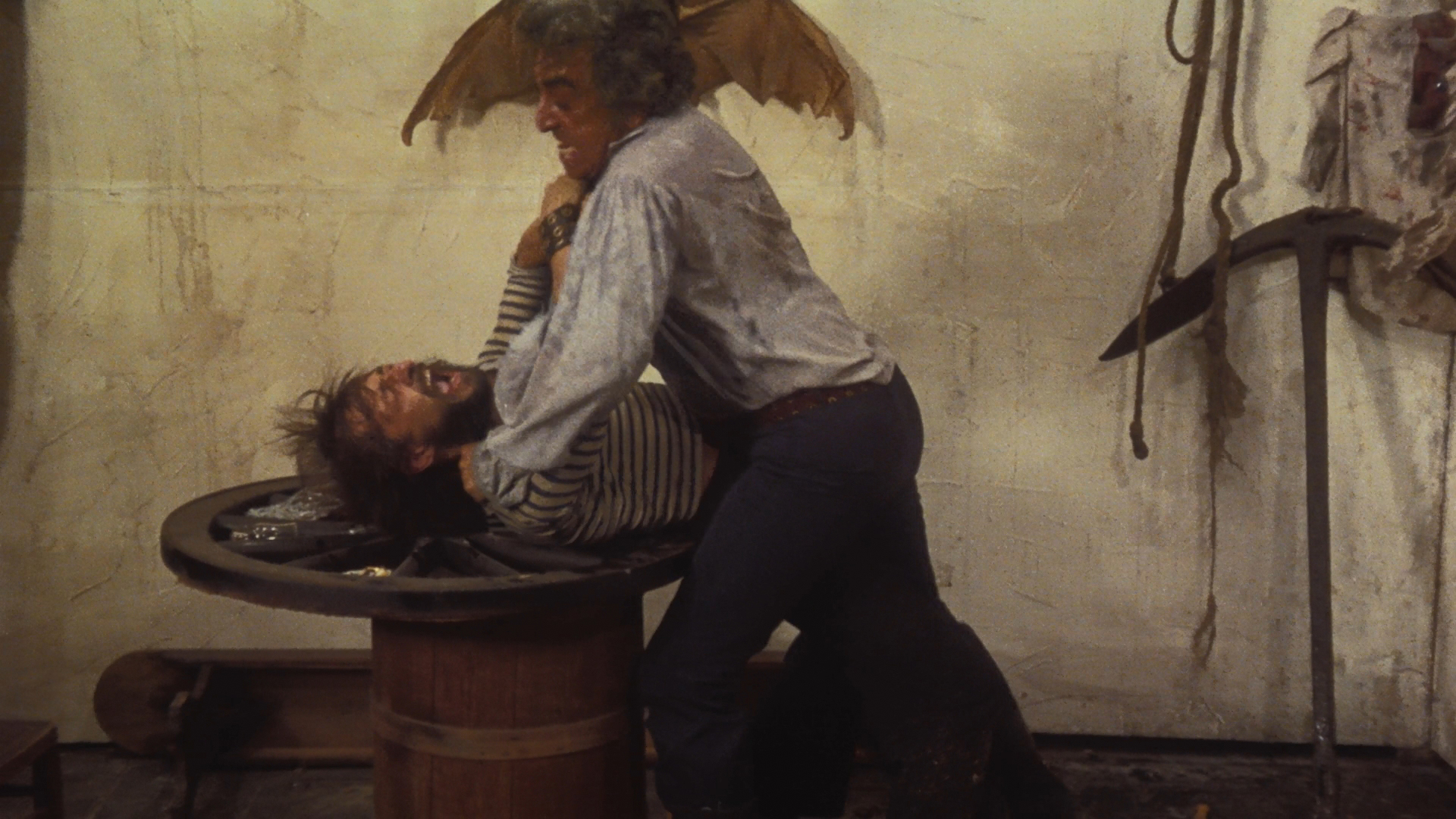 but the difference is minimal), a slew of optional subtitles including English, a 50-minute Rollin interview, the trailer, a shorter interview with Braque, the Rollin short "Les Pays Loins," a photo slideshow, illustrated essays, and best of all, 18 minutes of deleted footage (some with sound, some without), including a completely superfluous but surprisingly graphic sex scene at one of the tavern bedrooms between one of the younger pirates and a barmaid, a ludicrous semi-rape scene between Coeur and Braque that was included in initial French prints but removed from the video editions at Rollin's request (probably because Braque quite obviously can't begin to simulate a decent sex scene, though Coeur fans will enjoy her extra exposure), and two chunks of additional erotic footage from the climax that were wisely omitted for pacing reasons. For some reason a B&W version of the film is also included on the third disc. The American DVD reissue from Salvation ports over the same anamorphic redo with optional English subtitles; it's interlaced and the PAL conversion isn't the slickest in the world, but the results still convey Rollin's often striking visual concoctions.

The first Blu-ray edition came from Redemption through Kino Lorber with a far more earthy and subdued palette than before (even the blood has more of a sepia cast), and its 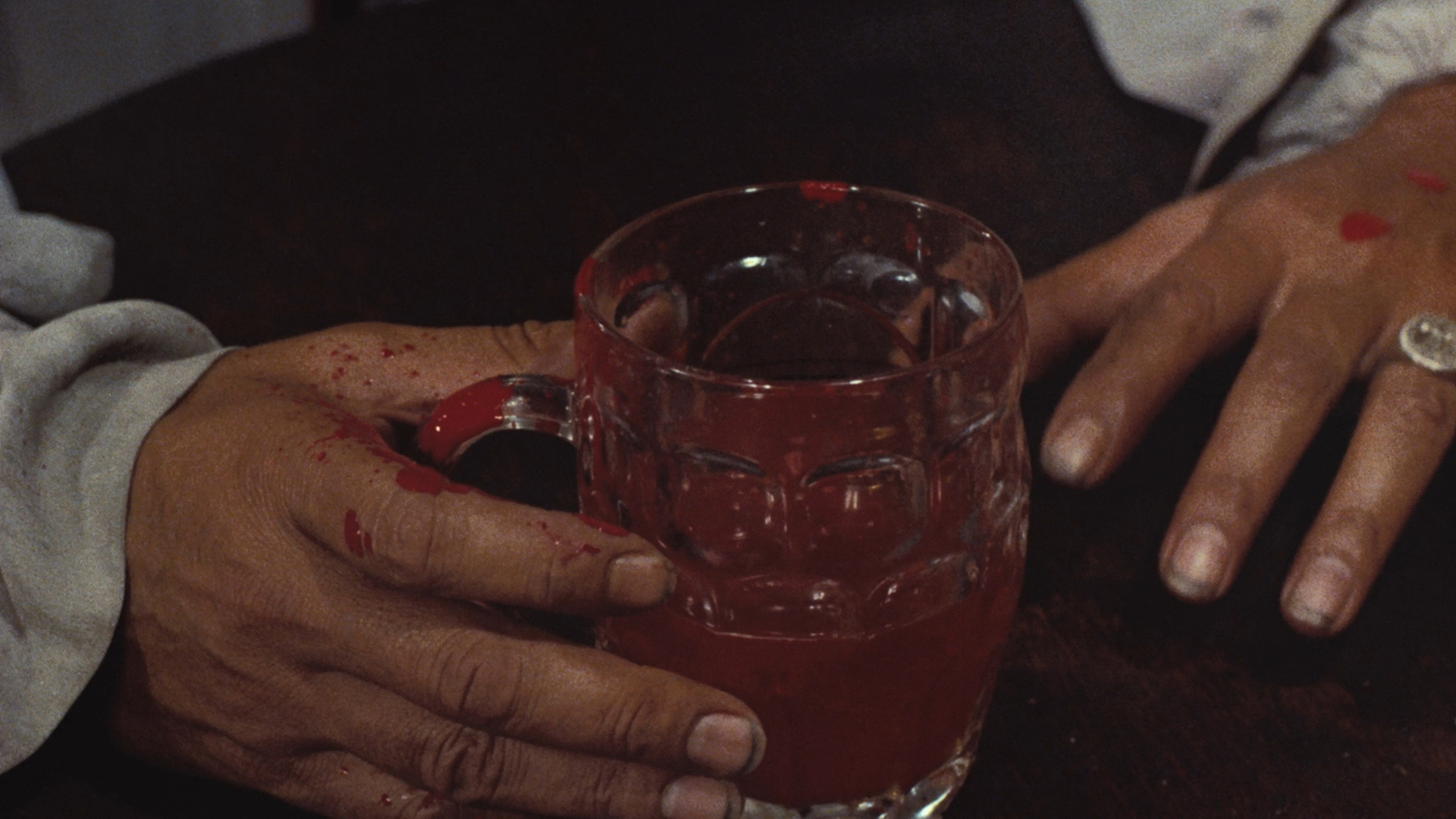 often grungy, murky appearance at least sort of fits with Rollin's attempt to hark back to silent serials and Hollywood pirate yarns. This one also features the revised 1.78:1 framing, for what it's worth. This extended cut (100 mins.) also reinstates the extra beach footage to the finale 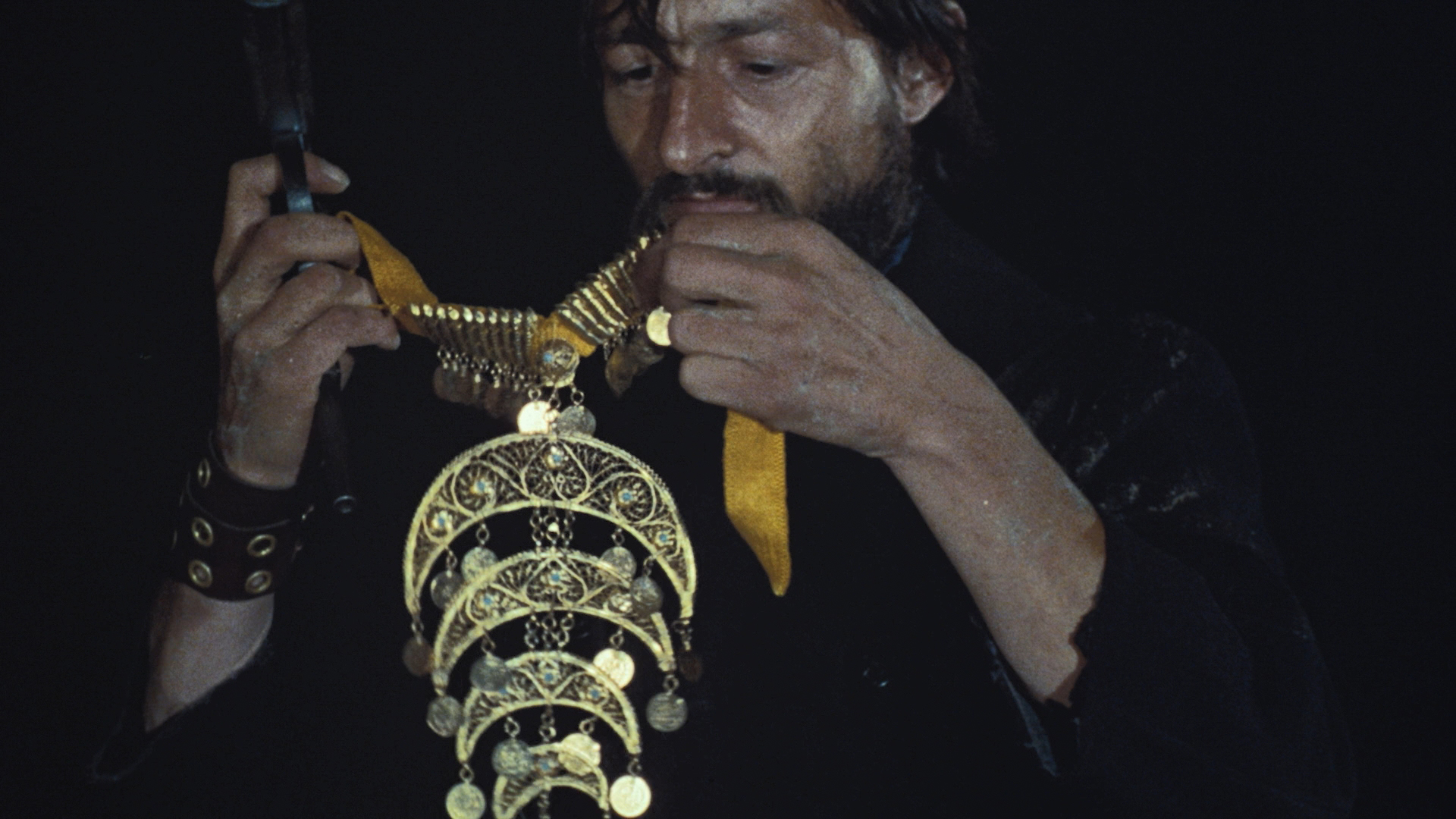 (which definitely slows down the pacing but makes for plenty of extra eye candy from Coeur), while the other two extra sex scenes are still there as extras. An additional outtake reel is basically lots of lingering shots of burning ships at night. The late Rollin appears for a video intro to the film, while critic Jean Bouyxou contributes a surprisingly deep interview (14m42s) about working on the film both as a PR agent and as an extra. A very brief snippet with Natalie Perry (also seen on other Rollin releases) is also included along with excellent liner notes by Tim Lucas (covering the second wave of Rollin Blu releases) and trailers for other films in the Rollin series.

In 2017, German label Wicked Vision released its own mediabook edition (with multiple covers) with one big selling point: a new restored scan from the original negative with the original, more familiar vibrant color scheme intact. (Frame grabs in the body of this review are from the Wicked Vision disc; comparison ones are below.) It's also the longest version to date, featuring all of the excised footage back in place apart from that one endless, 6-minute unconvincing softcore scene, which is still segregated as an extra (6m42s). French and German audio options are included with optional English and German subtitles, while extras include a 24-page booklet by Pelle Felsch and David Renske, a partial (52-minute) Rollin audio commentary (in English, carried over from the Encore release) and video intro, an interview with Willy Braque, the outtake reel, three trailers (German, French, and U.S.), and an image gallery. Definitely essential for fans of French horror and heartily recommended for anyone else with a taste for surreal, artsy, erotic horror from the era's golden age. 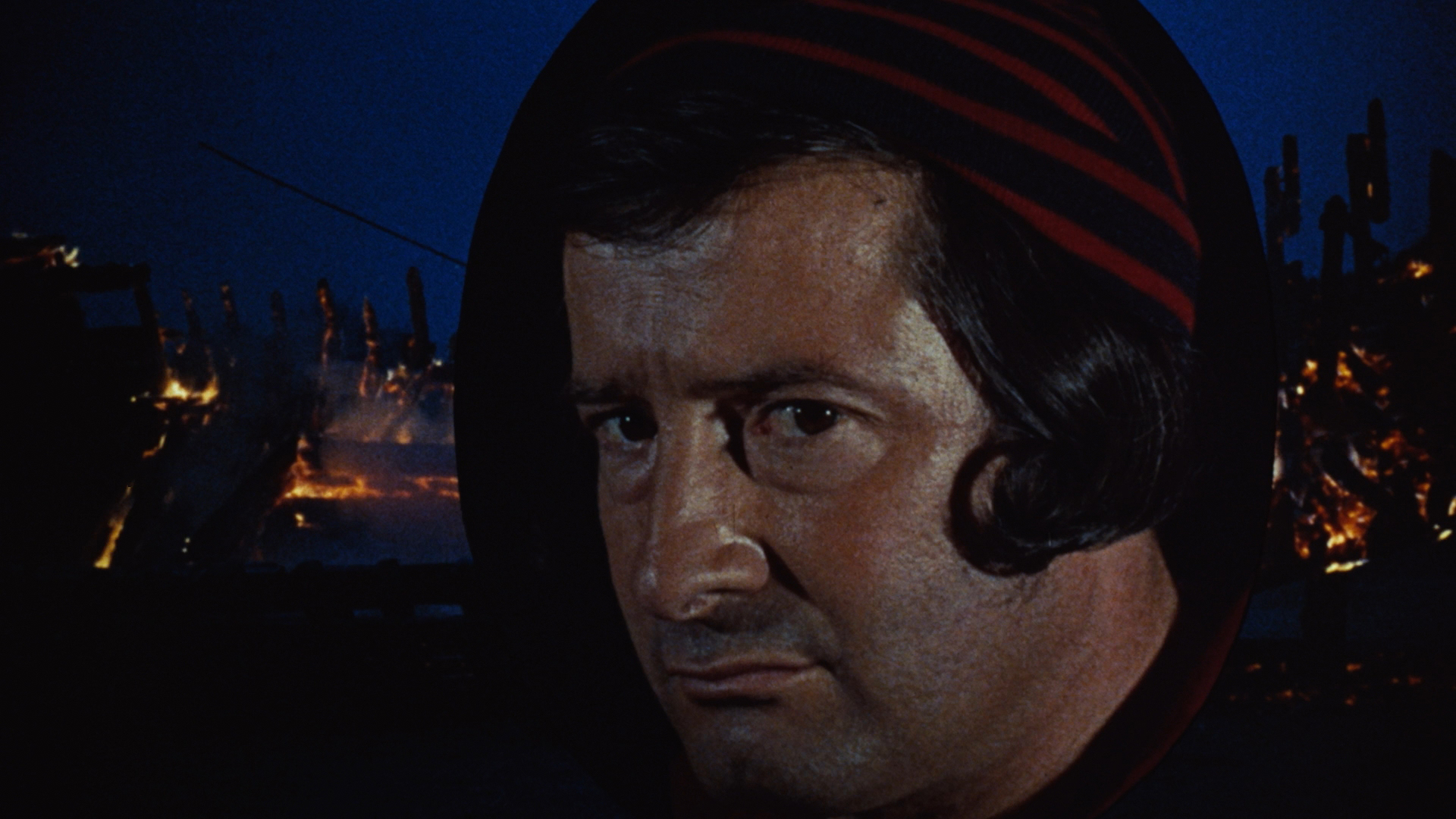 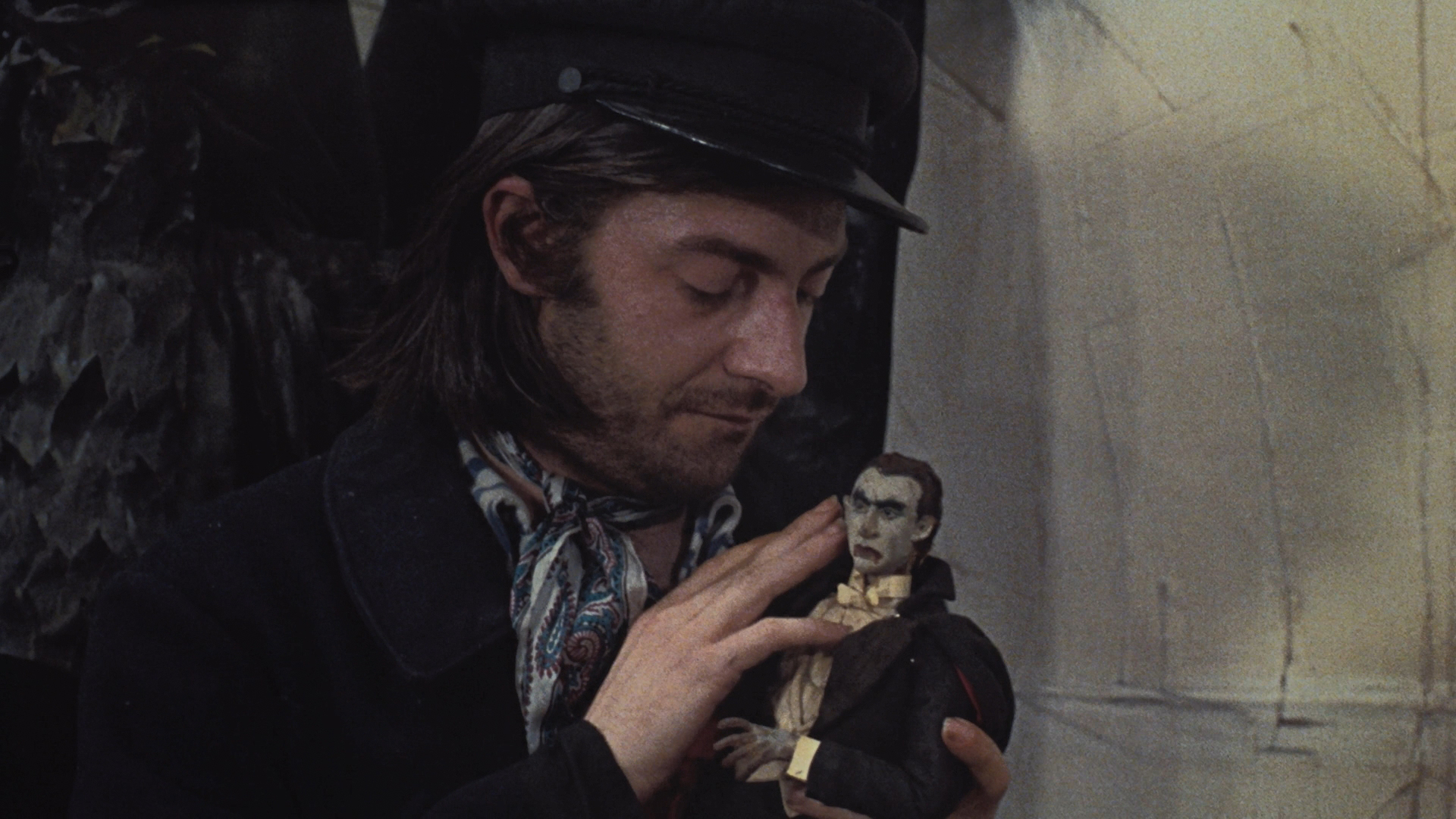 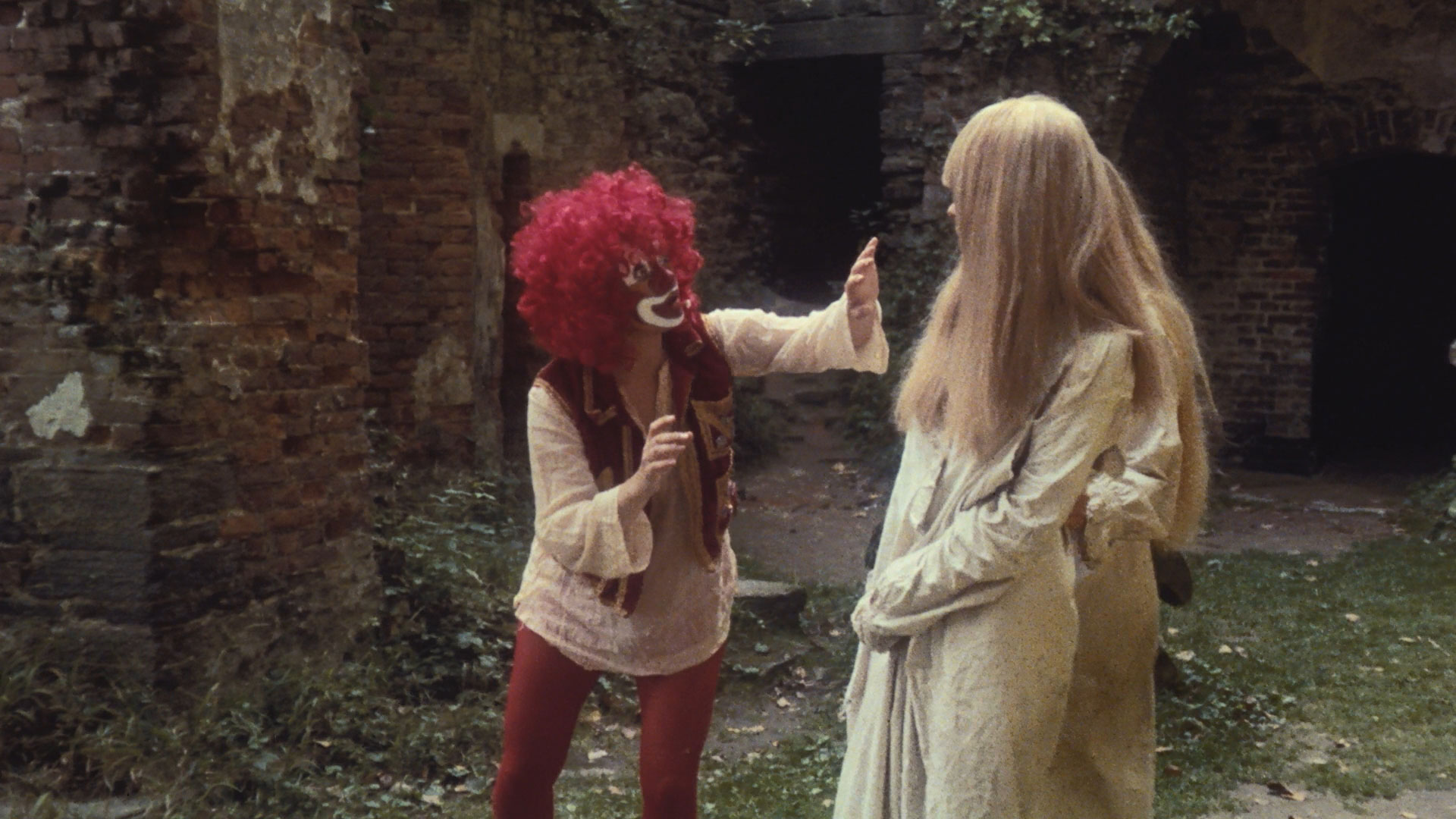 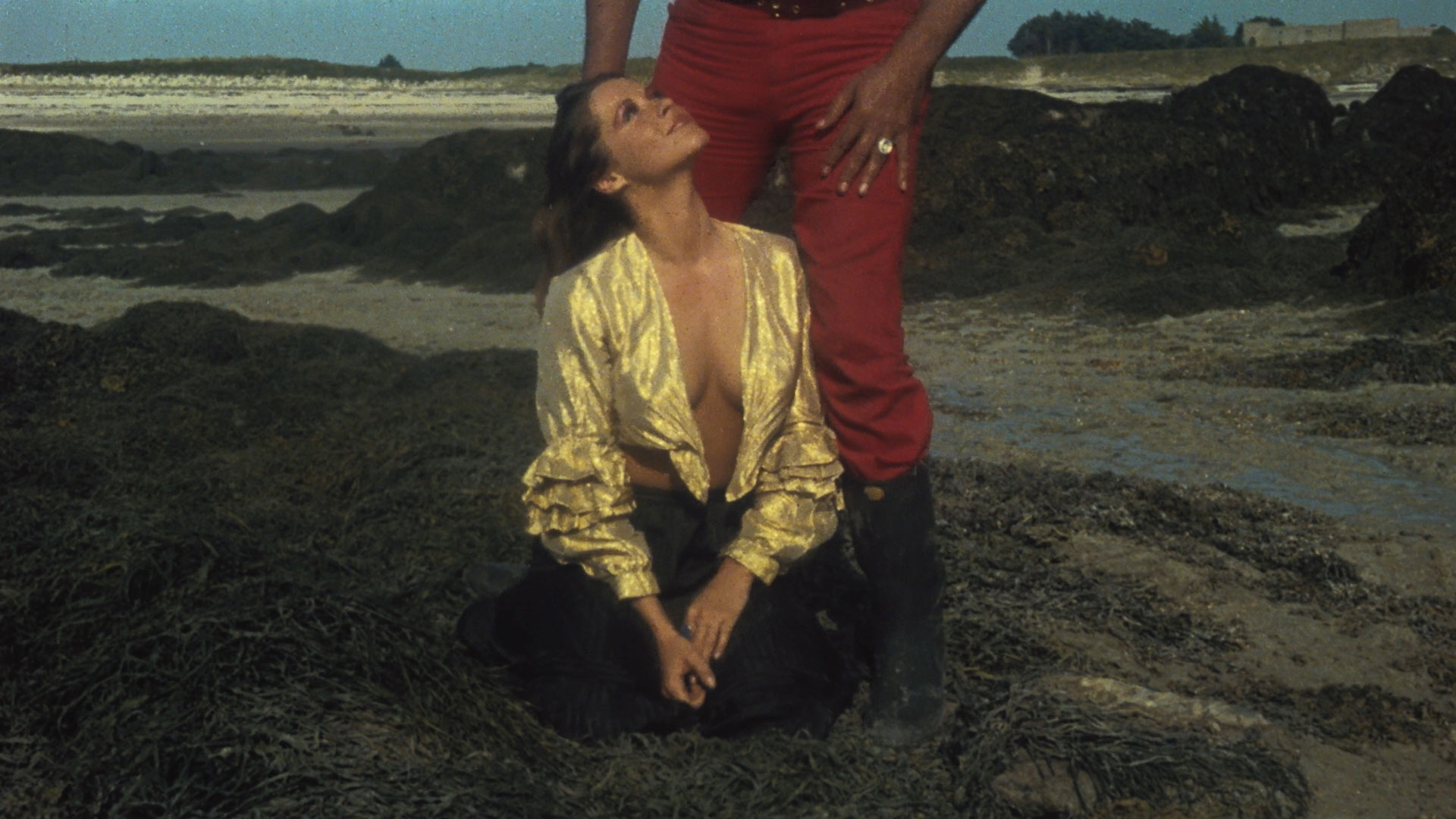 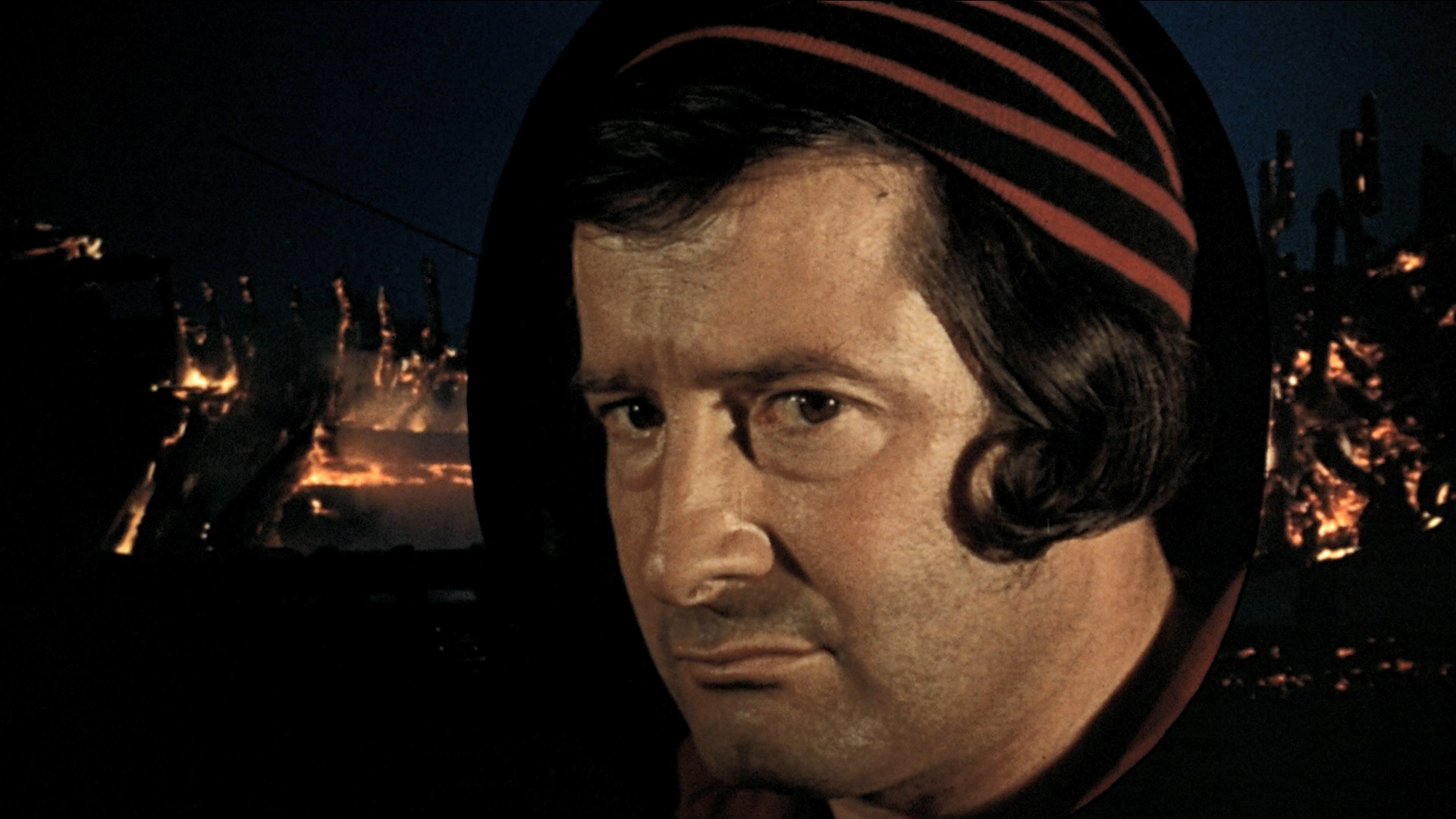 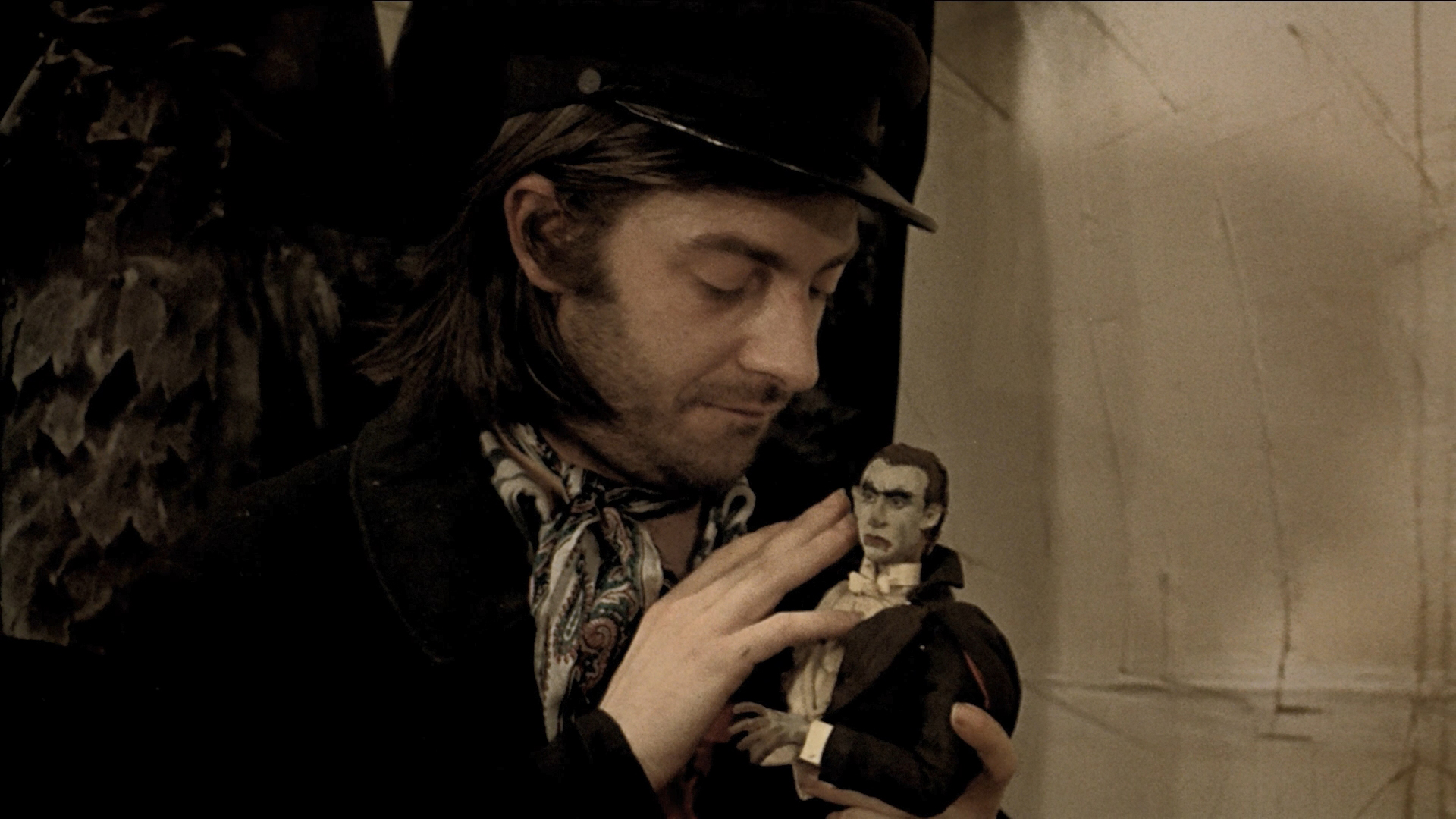 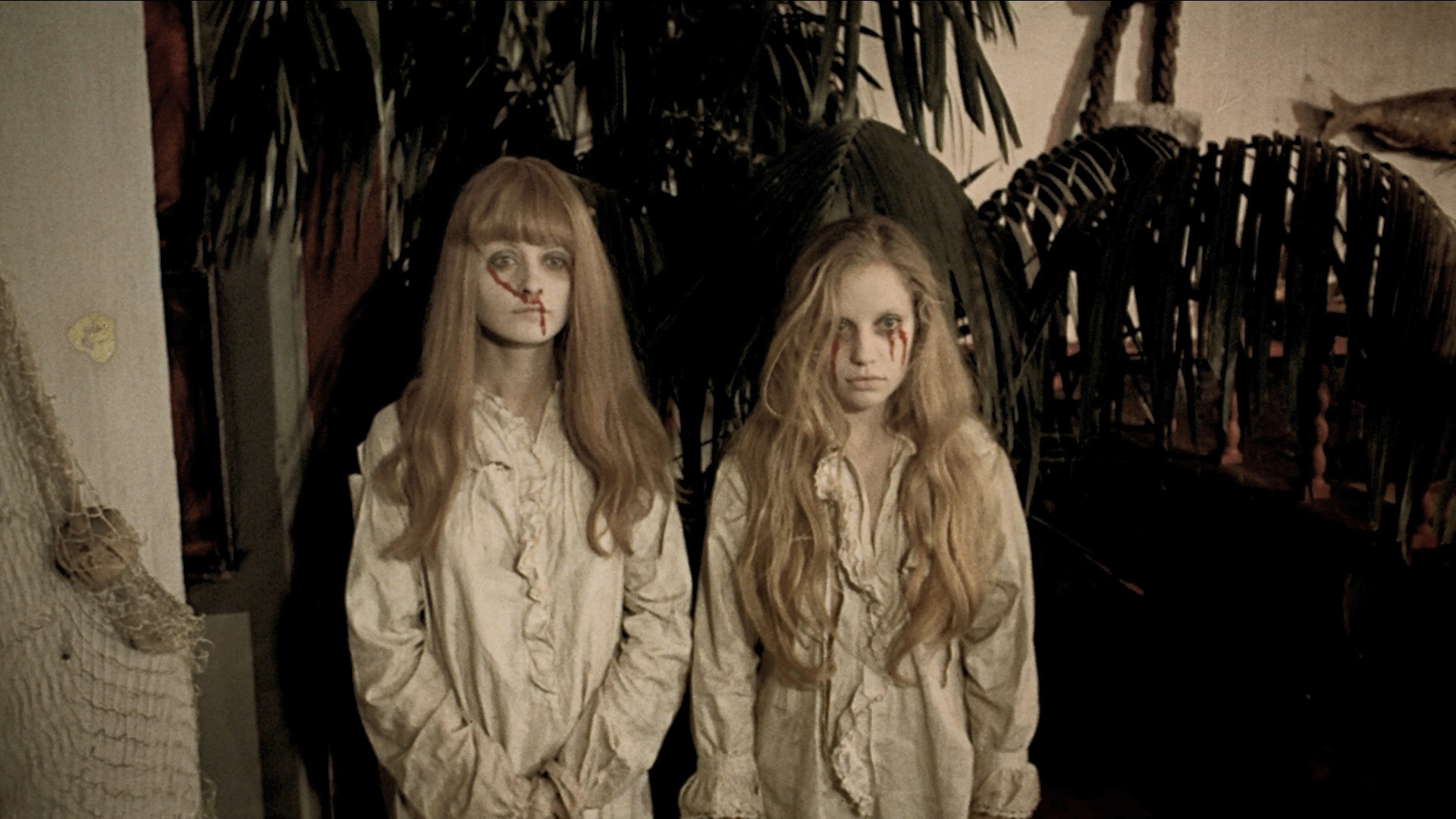 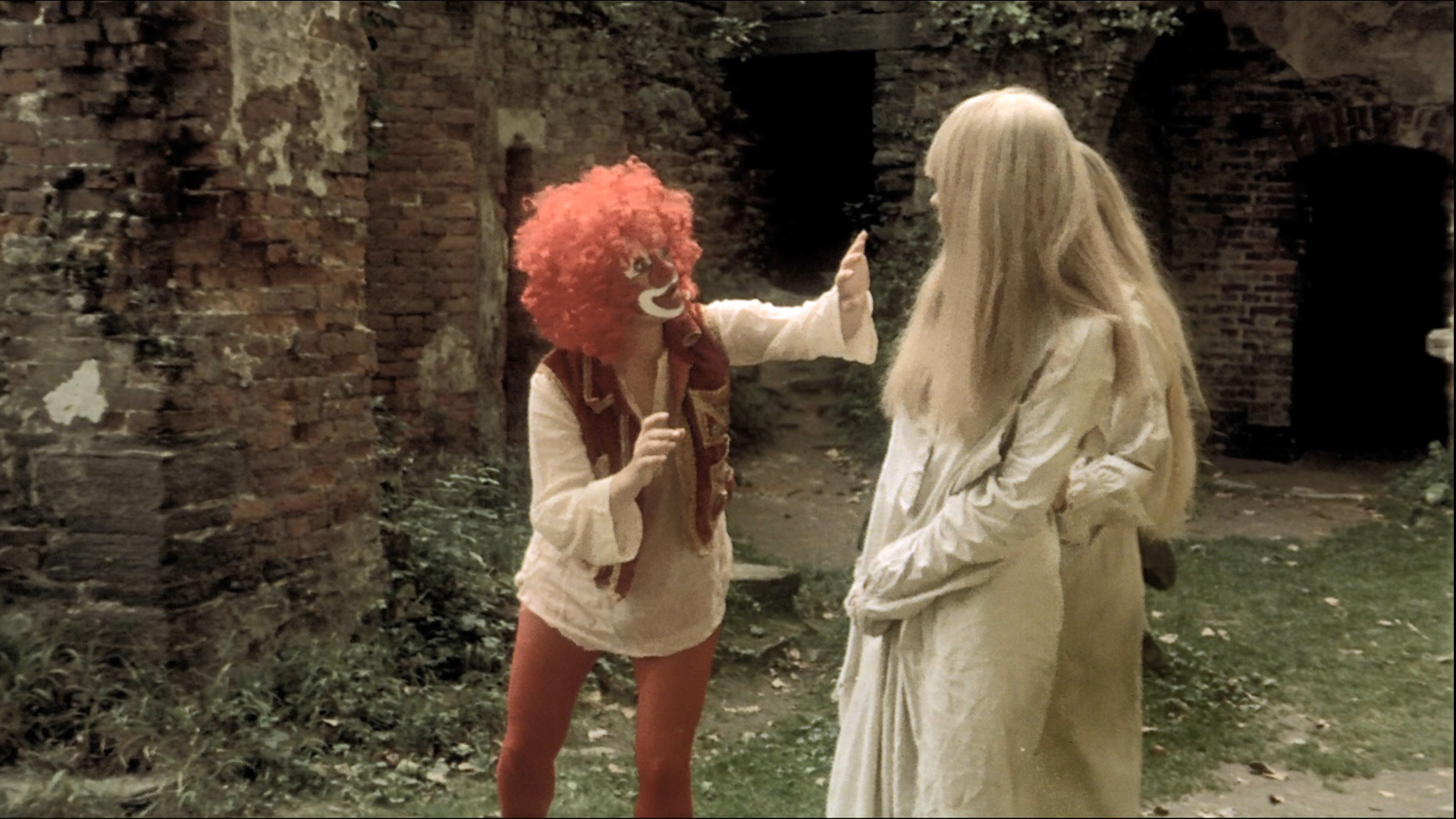 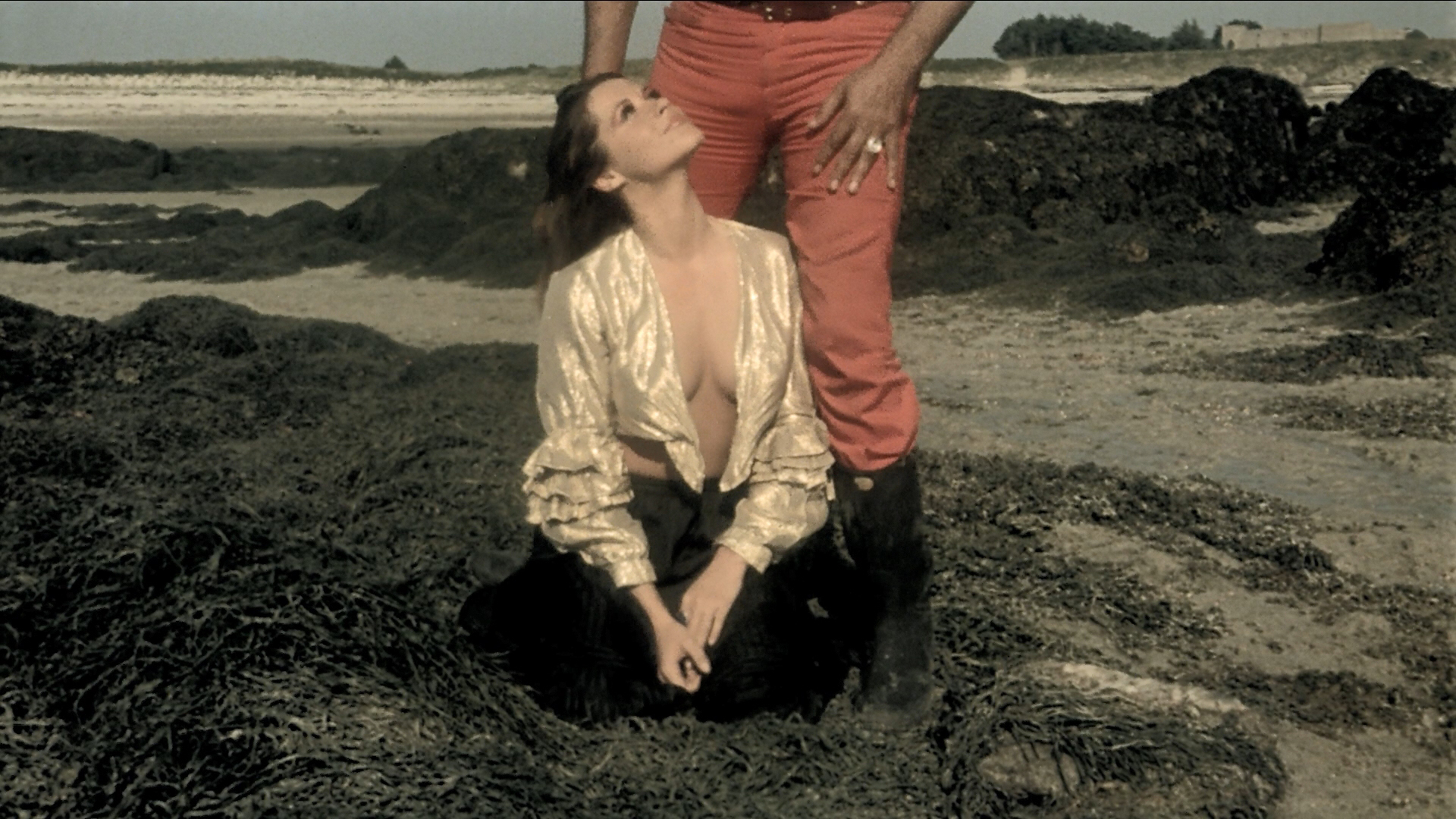 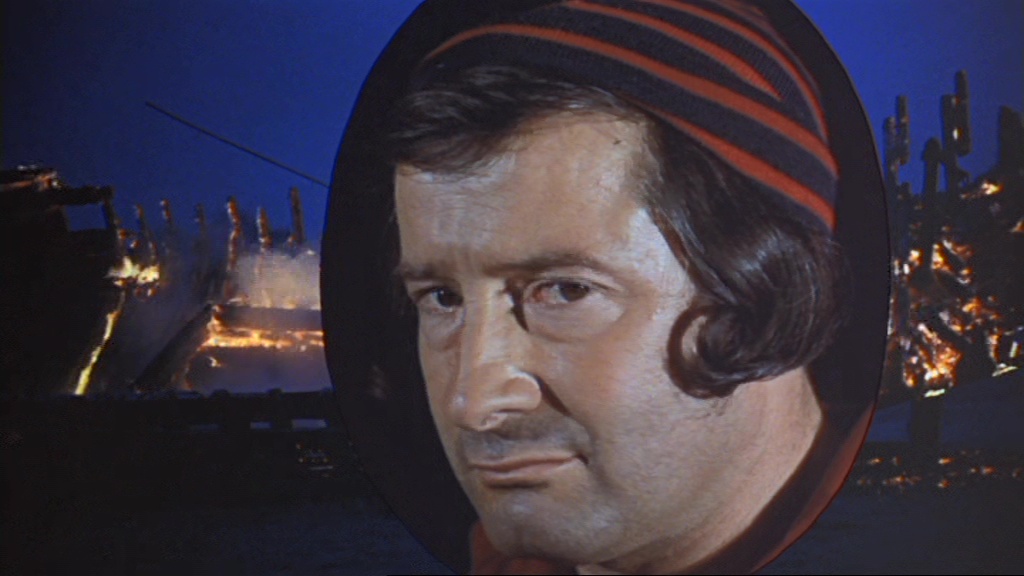 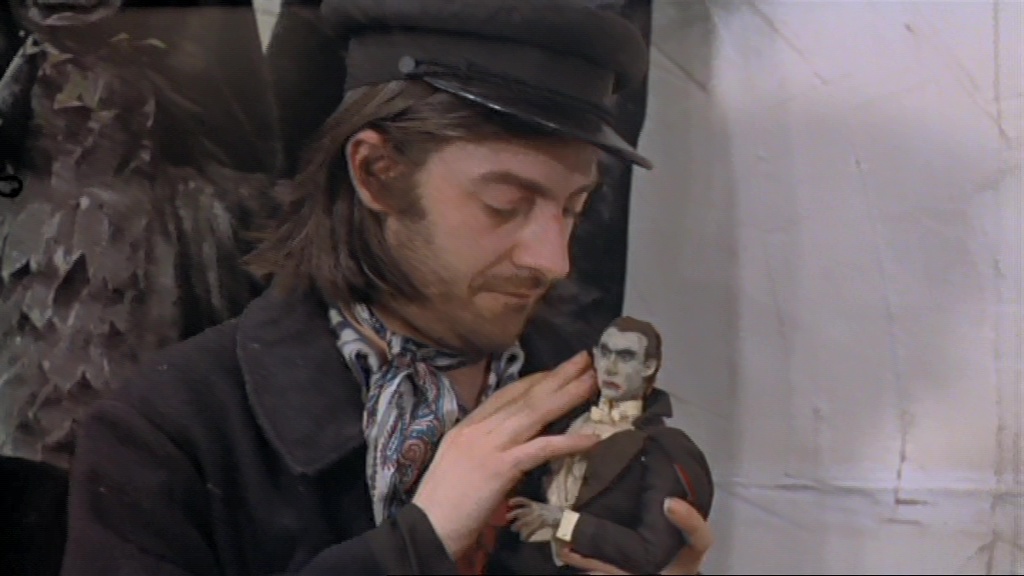 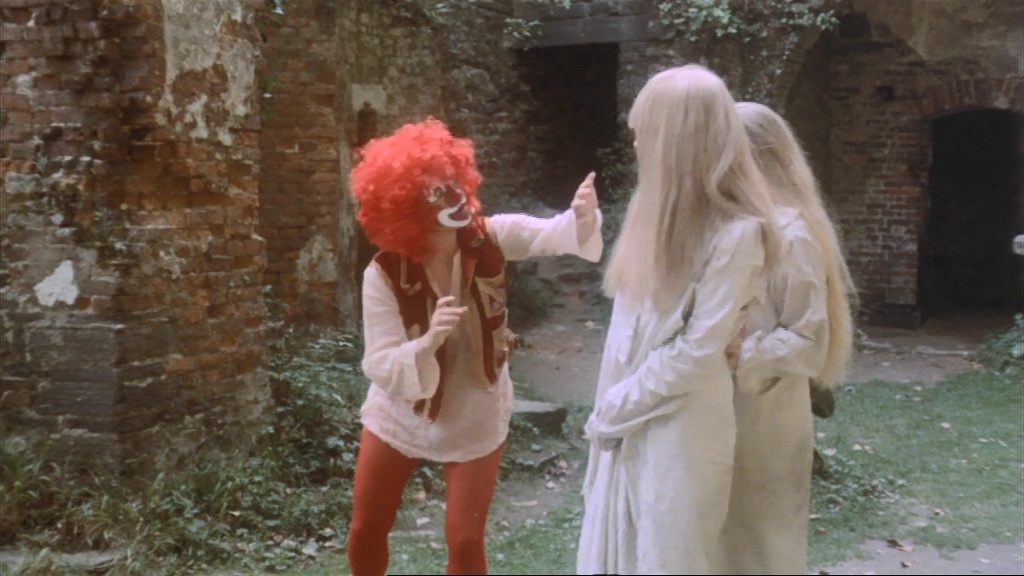 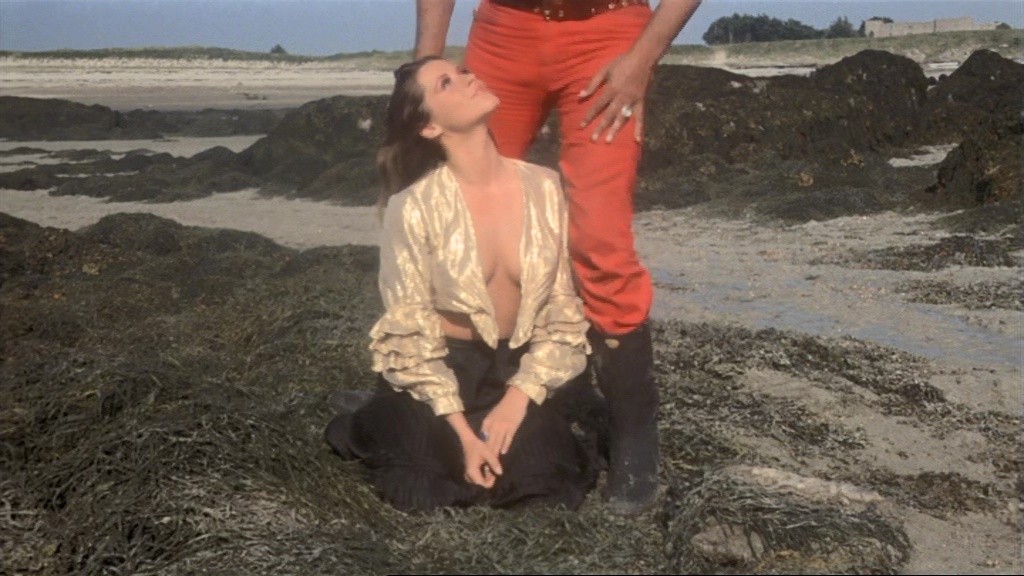