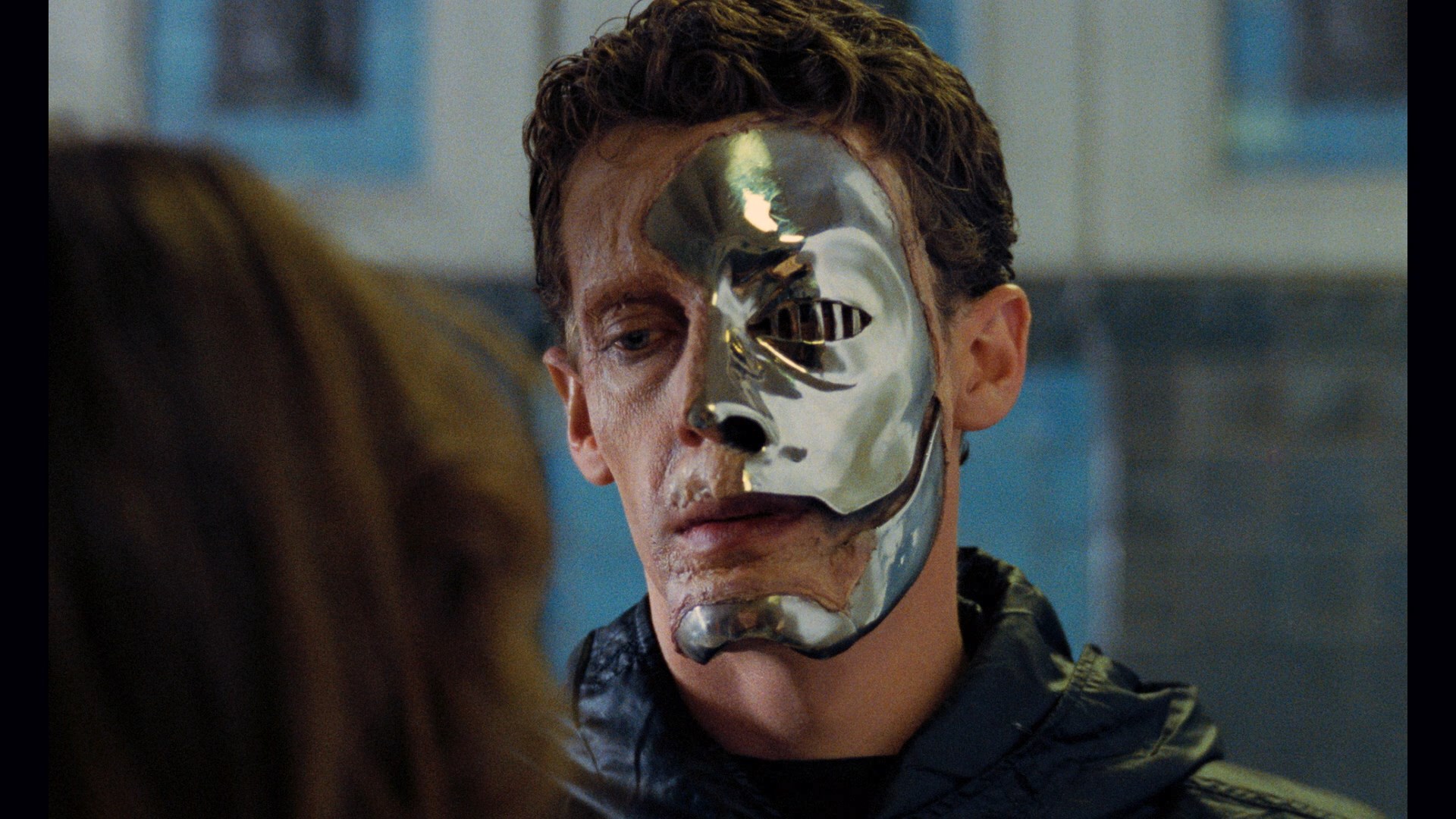 Perhaps no films better capture the essence of '80s Italian horror than the two official Demons entries directed by Lamberto Bava, which proved so 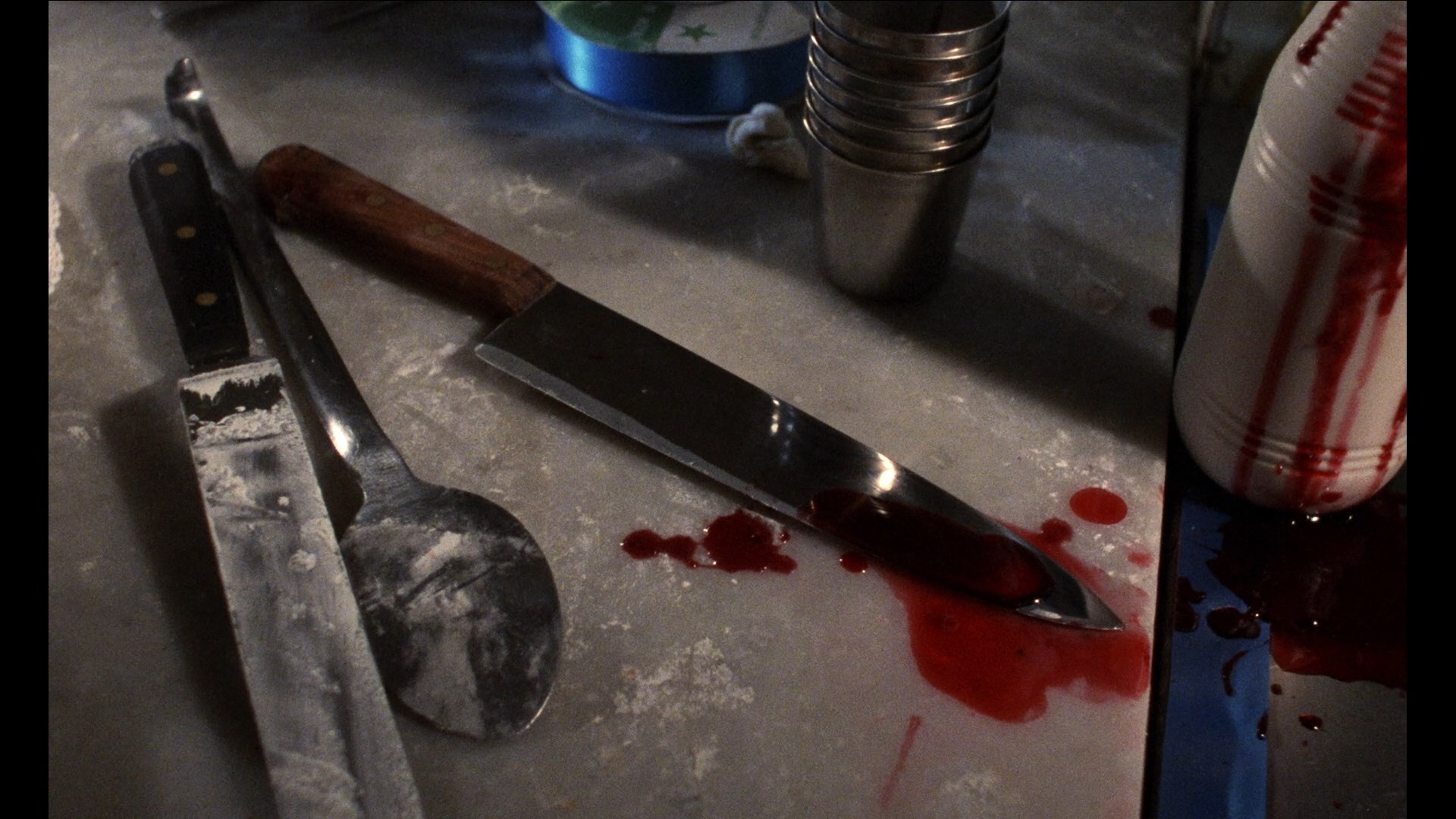 successful that numerous unrelated later films were branded as sequels to cash in on their popularity. Here rationality takes a back seat to style and set pieces, orchestrated for maximum gory panache with aggressive soundtracks and vivid colors adding to the appeal. Both films were also produced and bear the aesthetic stamp of Dario Argento, whose affinity for heavy metal at the time (also found in Phenomena and Opera) became a defining characteristic of the first film as well.

Set in Berlin, Demons opens with music student Cheryl (Hovey) frightened in a subway station by a sinister man (future horror director Soavi) wearing a metal mask. She soon discovers he's handing out invitations to a free advance screening of a horror film at a new movie theater, so Cheryl decides to go with her best friend, Kathy (Cozzo). That night they sit with and carry on a flirtation with two guys, George and Ken (Opera's Barberini and Zinny), as they watch a bloody slasher film about a prophecy by Nostradamus coming true with various people turning into demons. Meanwhile a real display of that metal mask slices open the face of another patron, loudmouthed hooker Rosemary (Geretta), who's attending with her pimp (the legendary Bobby Rhodes). Soon Rosemary's turning into a fanged, clawed, drooling monstrosity in the ladies' room and spreading the deadly contagion through the theater, 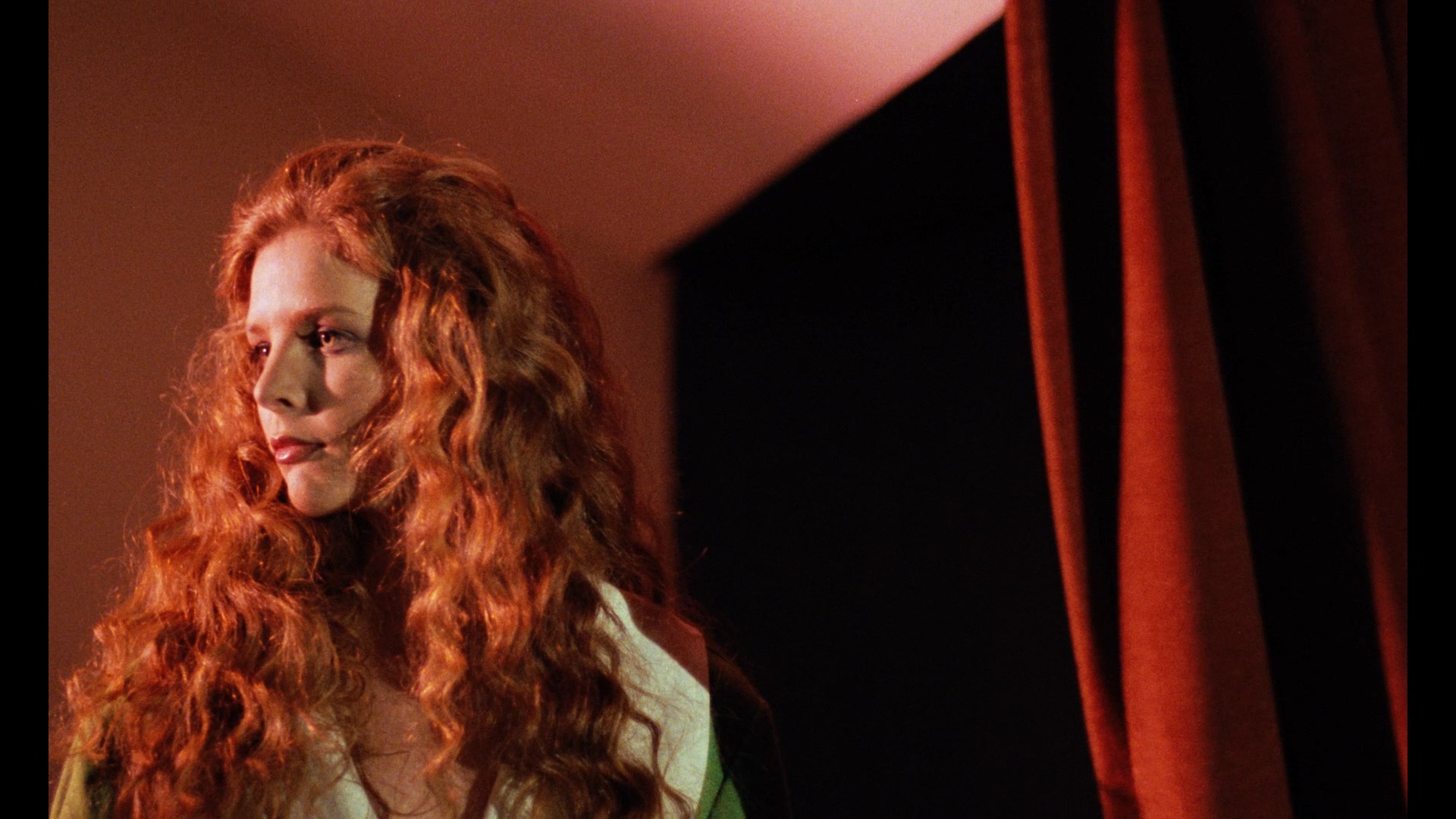 where everyone isn't quite aware at first that all the screaming and bleeding might be for real. With the exits mysteriously blocked, the survivors are picked off one by one and turned into bloodthirsty creatures of the damned.

It really isn't a criticism to say that Demons is constructed in an outrageously arbitrary fashion, with various subplots heading nowhere (especially that carload of coke-sniffing kids) and several elements tossed in for senseless spectacle (e.g., that helicopter through the ceiling). The joy here lies in the execution, with director Lamberto Bava (son of Mario) piling on the crazy primary colors and energetic mutilations with escalating glee as '80s favorites like Mötley Crüe, Go West, and Billy Idol accompany the mayhem. Then 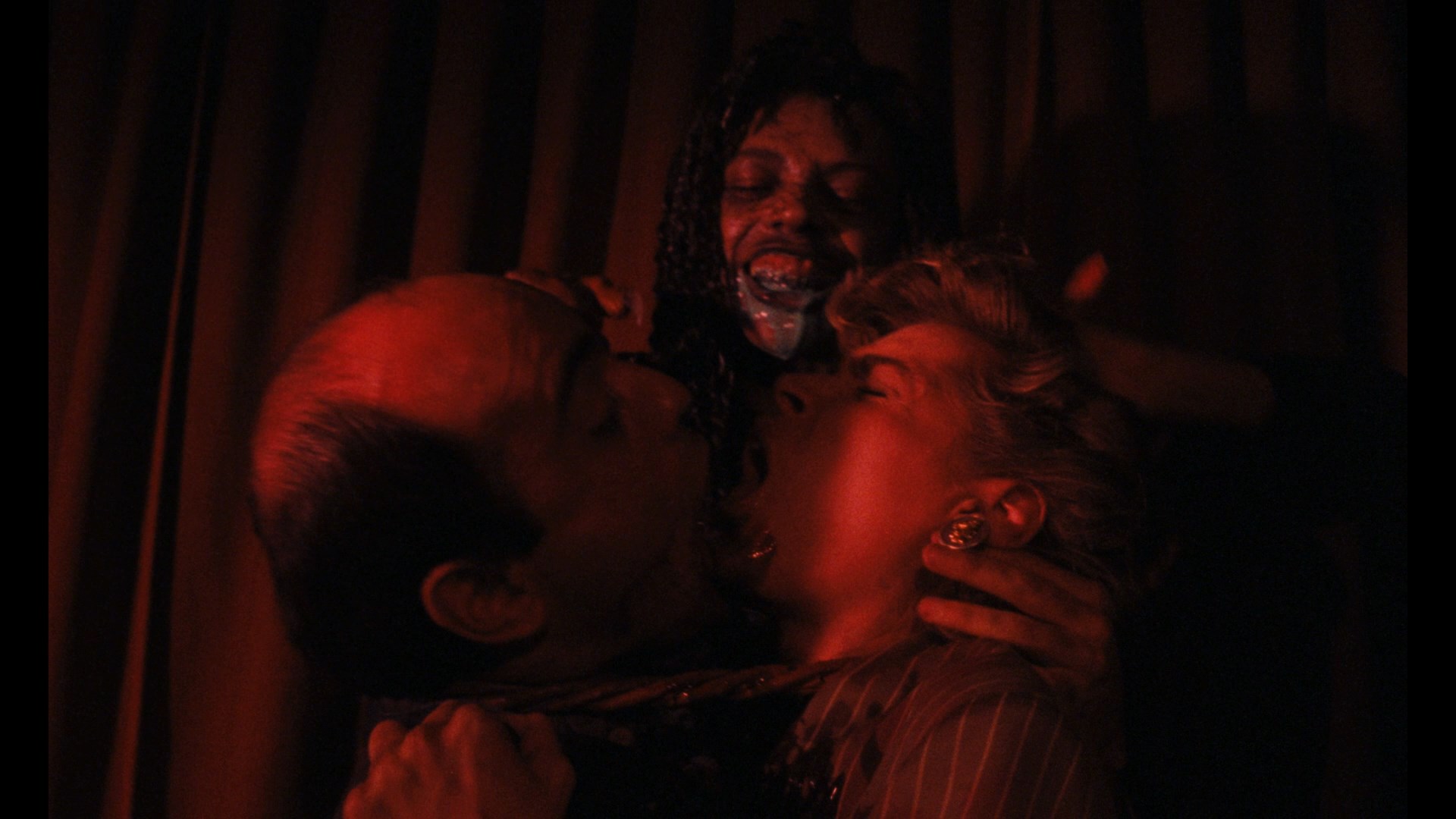 there's the spectacular music score by Goblin veteran Claudio Simonetti, whose main theme has since become one of his most popular standards. However, the biggest star here is the makeup effects by maestro Sergio Stivaletti, who outdoes himself with a stunning array of creatures and mutilation gags up there with the best of Romero and Fulci.

Released on VHS and laserdisc by U.S. distributor New World, Demons first hit American shores with a somewhat different English mono dub compared to the European Dolby stereo one including a different voice for one character (the bleach-blonde punk girl) and some additional sound effects, such as the slashing heard over the title card. The European English soundtrack debuted on home video first on laserdisc from 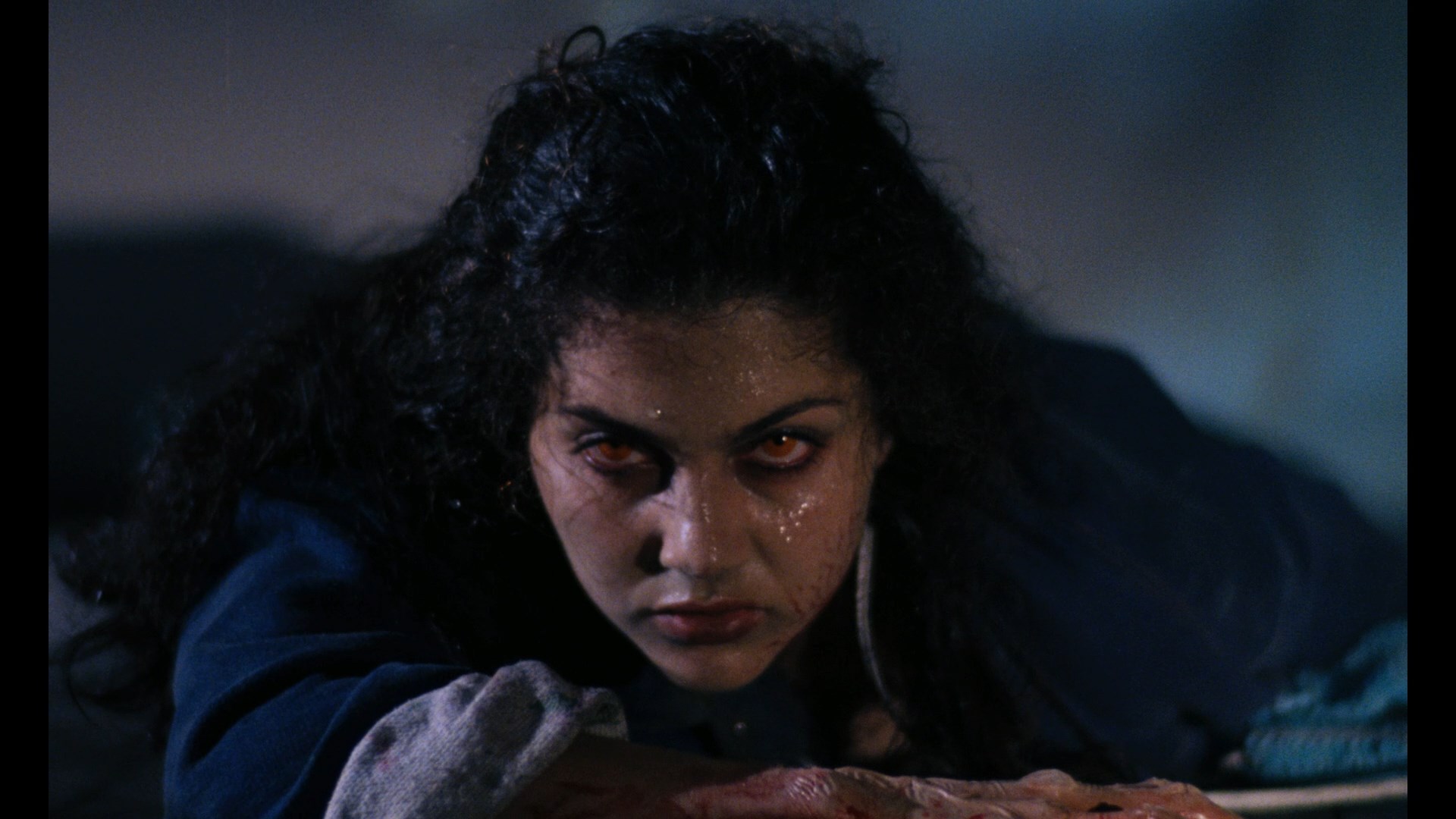 The Roan Group and then on DVD from Anchor Bay in a non-anamorphic 1.66:1 transfer. The major extra here is a bumpy but sometimes worthwhile audio commentary with Bava, Stivaletti and writer Loris Curci, plus talent bios, the trailer, and a selection of behind-the-scenes footage culled from the same material used for Dario Argento's World of Horror. Anchor Bay later revisited the film (and its sequel) with anamorphic reissues, complete with the same extras and transfers that fared little better than their predecessors.

For some reason, Demons sparked a craze for Steelbook packaging for its Blu-ray debuts in both the U.K. and the U.S. The former came first in 2012 courtesy of Arrow's special edition, featuring a new HD transfer from Titanus with the U.S. English audio in LPCM mono as well as the same format for the Italian track with optional English subtitles. It looks very sharp and warm but a bit overly bright, while the audio powerfully reflects the original source material. Extras include the preexisting commentary track, a new Italian (with 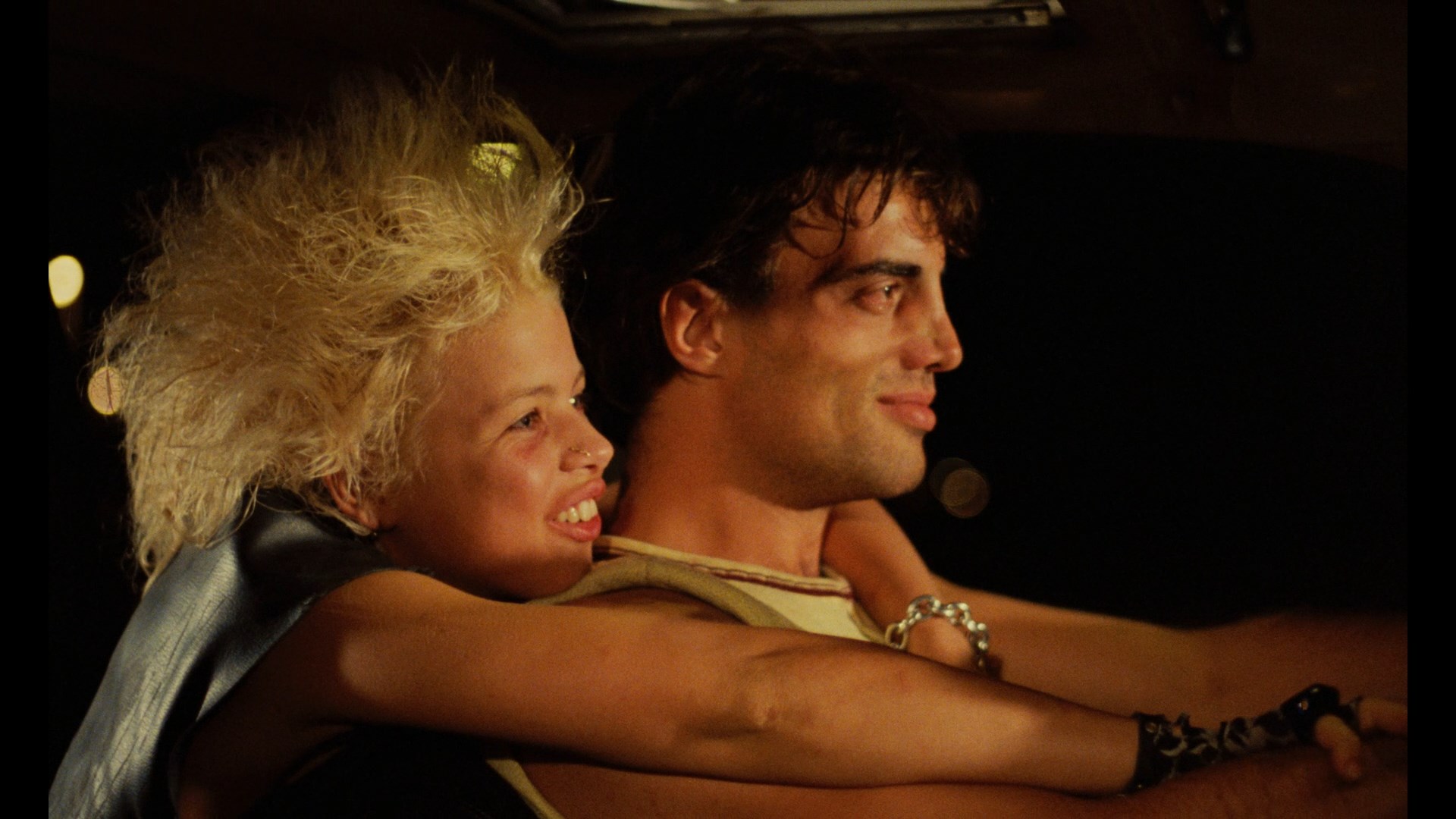 subs) commentary with Bava, Geretta, Simonetti, and Stivaletti that breezes a long a bit more smoothly than the prior one, an 11-minute video interview with Dario Argento about his involvement in co-writing and producing the project, a 10-minute video interview with Simonetti, a random 12-minute chat with director Luigi Cozzi about his favorite Italian horror movies, and an insert booklet with liner notes by Calum Waddell, a fold-out poster, and a Demons sequel comic.

The following year, Synapse debuted Demons on American Blu-ray and DVD in a limited Steelbook with a more elaborate package featuring a significantly fine-tuned presentation of the HD source material, most notably bringing the black levels down and the colors up to their original atmospheric levels and cleaning up some anomalies in the master. In a nice touch, both English tracks are included here along with the Italian one (all DTS-MA), with optional English subs for each. The newer cast and crew commentary is included here, while the featurettes (produced by Waddell's High Rising Productions) include an interview with longtime Argento journalist Alan Jones, a 30-minute Bava interview, a 30-minute Cozzi interview, a video interview with stunt man Ottaviano Dell'Acqua, and a different interview with Argento about the film. As an added bonus, you get a Metropol theater ticket replica in the package, too, which is sold directly from Synapse and through Diabolik. For those who 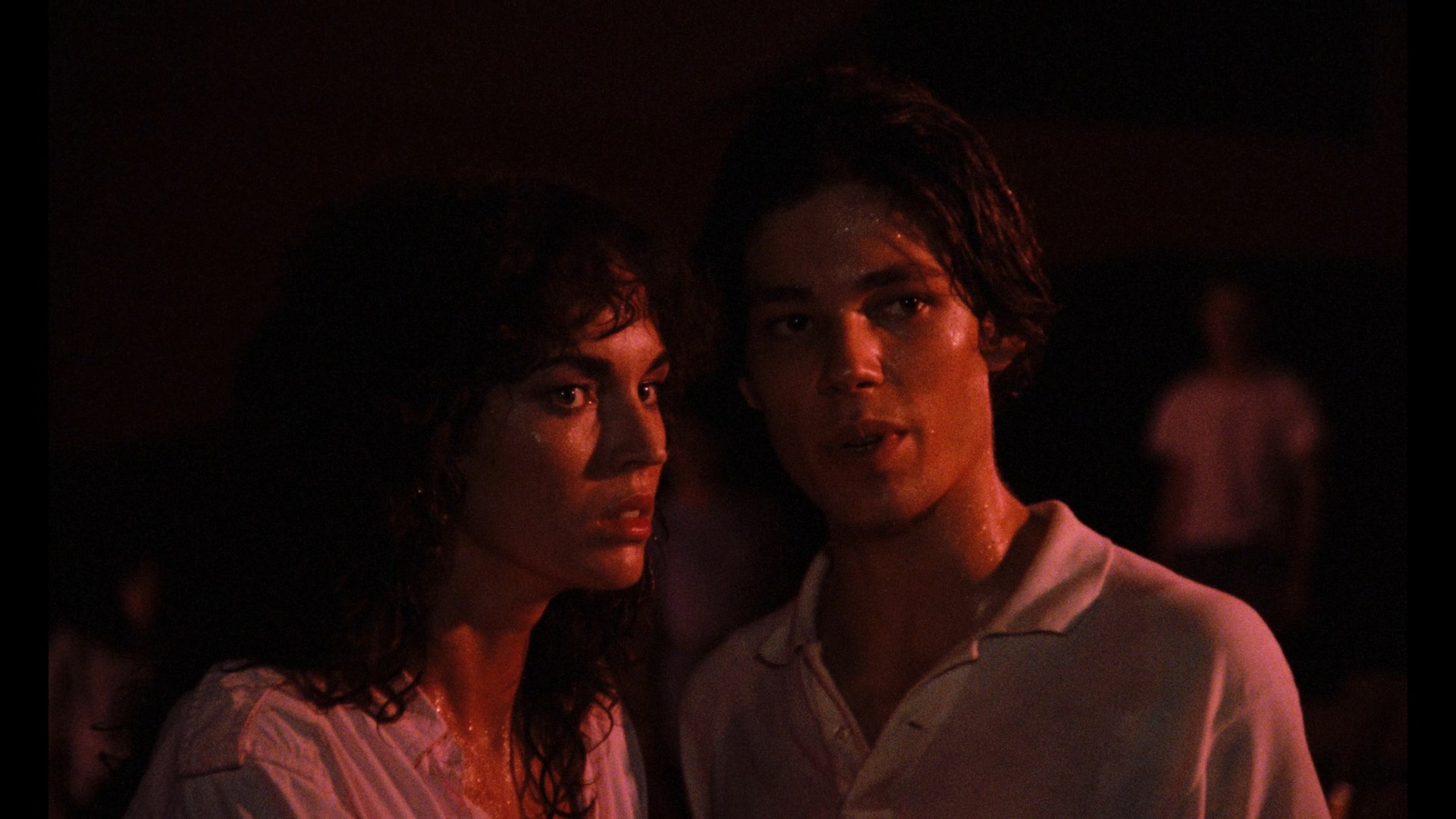 couldn't make that pricey plunge, the same transfer was issued in late 2014 with only the two English-language options and the theatrical trailer, available from Diabolik and Amazon.

Naturally, the success of Demons spawned a sequel one year later with Bava back at the helm, Argento returned to co-write (along with Franco Ferrini and Dardano Sacchetti), 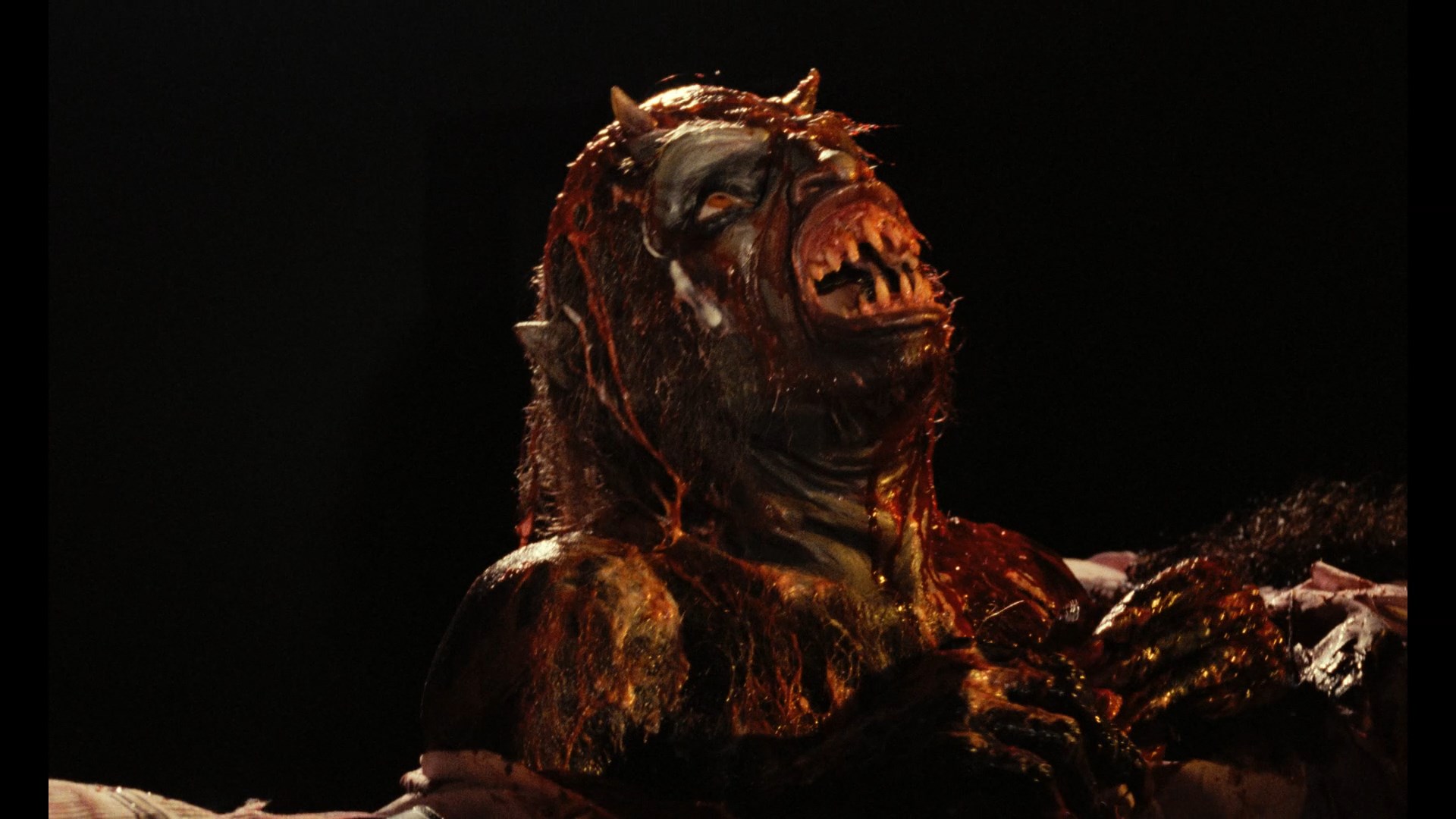 and Stivaletti contributing some outlandish mechanical effects. However, Demons 2 (fully titled Demons 2: The Nightmare Returns in some markets) hit just as the theatrical opportunities for indie Italian horror fare were plummeting and even the genre's most stellar entries were being shuffled off directly to VHS. That same fate befell this one when it was issued on tape in America from Imperial Video, inexplicably cut by nearly three minutes to gain an R rating (and completely alienate the target audience). The stupidity of this gesture has never really been justified, and fans quickly went scurrying for the Japanese laserdisc instead with all of its juicy goodness intact.

The plot is an even more bonkers spin on the first film with a bunch of people trapped in a confined setting as a demonic contagion spreads through the premises. This time the location is a German high-rise apartment complex, one of several Cronenbergian elements to be found, where petulant teen Sally (Tassoni) is about the celebrate her birthday. However, she throws a hissy fit when her dress sleeves go back and forth and her ex-boyfriend gets invited against her wishes, and it's off to the bedroom to pout in front of her TV where a movie about the rise of the demons is playing in seemingly every single apartment. Among the other tenants are an expecting couple (Knight and Brilli), a little innocent girl (Asia Argento in her big-screen debut), and a fitness center led by none other than Bobby Rhodes again. Anyway, Sally's party takes a downturn when a demon lunges out of her TV screen and turns her into a howling monster spreading death and destruction among her guests; then it's just a matter of time as the acidic demon blood drizzles from floor to floor and the tenants get mangled and transformed into an army of murderous monsters. 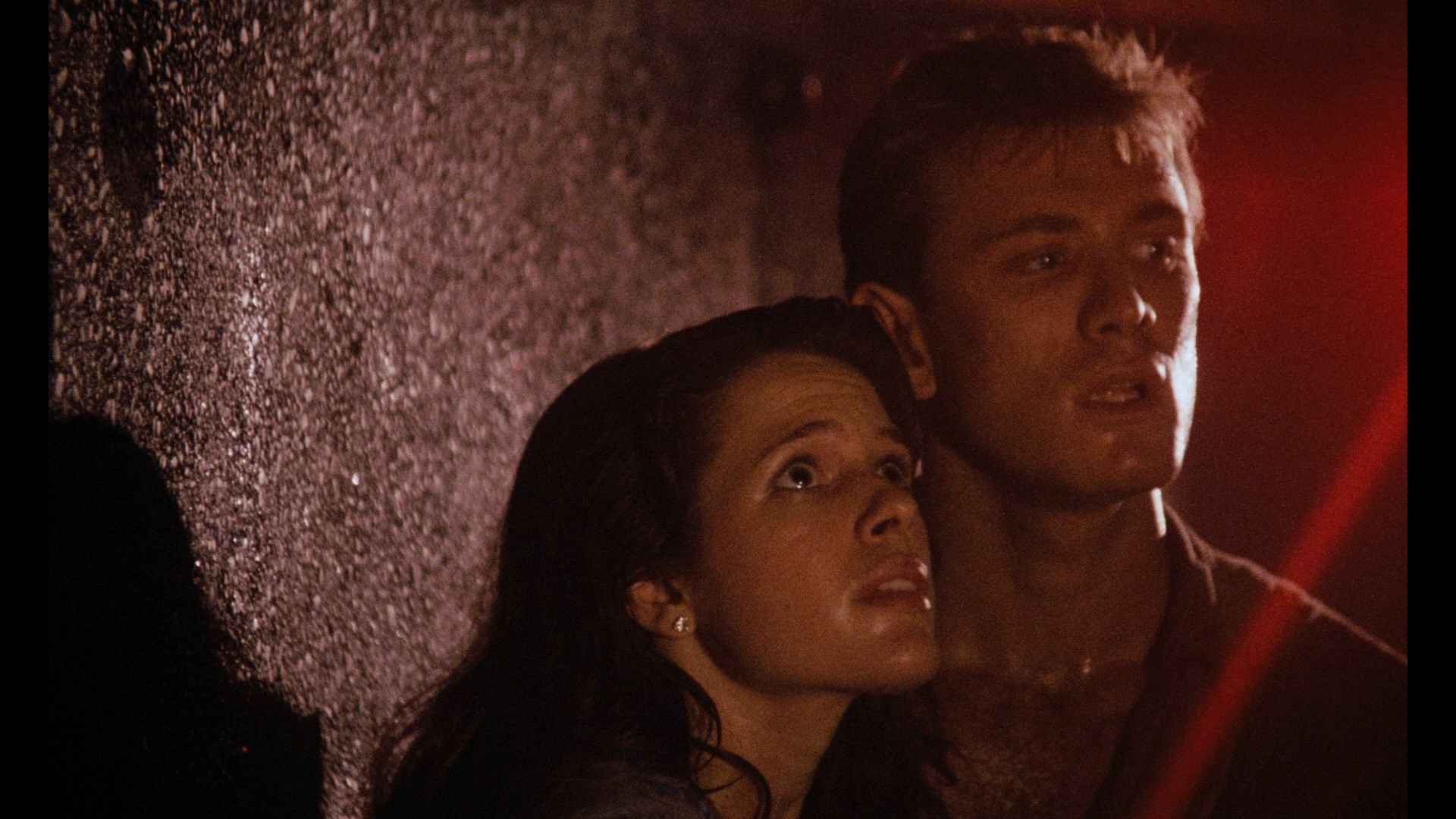 Though strong enough to go beyond an R rating in its uncensored form, Demons 2 isn't as explicit in its bloodletting and often veers more into flat-out surrealism instead, such as a small boy and a family pooch turning into rampaging killer mini-demons and weird pop art decor framing a number of scenes. The soundscape is also markedly different with Simon Boswell (who scored this back to back with StageFright) supplying a fantastic rock and supervising a terrific collection of songs from the likes of The Smiths, Dead Can Dance, and The Cult. Unfortunately it's also far more technically sloppy, with an in-camera film defect plaguing a handful of jittery shots and those obligatory pointless side stories padding the film out for no apparent reason (in this case Sally's parents enjoying a beer garden and another carload of obnoxious kids driving around aimlessly). It's still a ton of fun on its 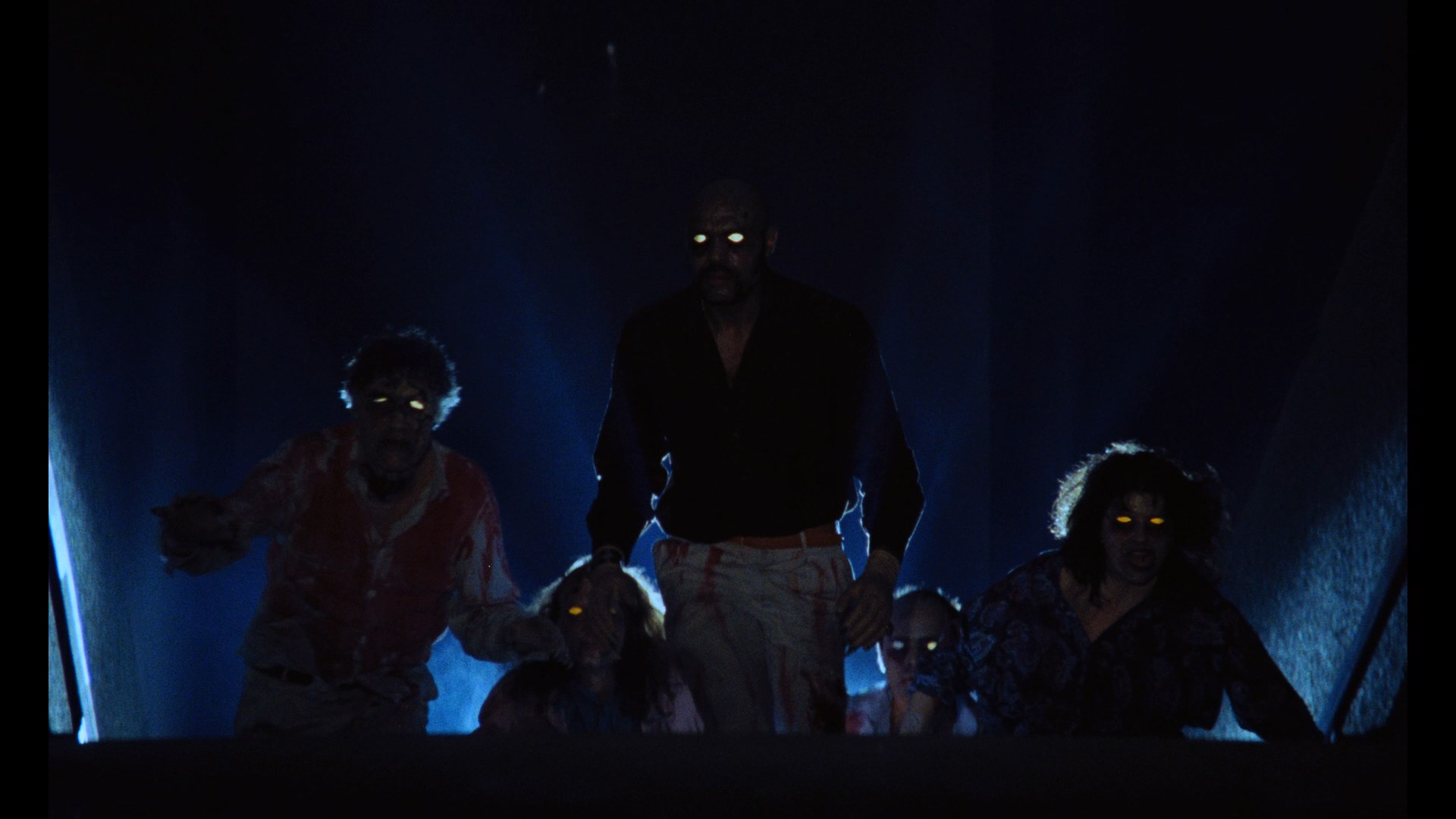 own terms, however, and the overall atmosphere is oddly haunting if you give up on trying to follow a linear storyline.

This film has had an identical history on home video as its predecessor apart from that scissored VHS release. The Roan laserdisc and Anchor Bay DVDs were uncut with pounding English stereo soundtracks, though its problematic, ultra-grainy film stock has defeated more than a few telecine operators. Again you got a Bava/Stivaletti/Curci commentary and a trailer. The subsequent U.K. Arrow release on Blu-ray and DVD in 2012 features a much-improved HD transfer, though the nature of the source often defeats it with excessive brightness exposing lots of compression issues. However, the LPCM English and Italian audio (with optional subs) are fine. Extras include a 21-minute Stivaletti interview about his memorable puppet and gore effects, another barely-connected Cozzi interview, the same audio commentary, and a booklet with similar attributes as the previous film.

Fortunately the Synapse transfer rectifies these issues by getting the black levels back under control and adjusting the compression far more tastefully, resulting in an image about as stellar as possible in 1080p for this film. The limited Steelbook version (again available directly from Synapse and from Diabolik) comes with the English and Italian audio in DTS-HD MA and optional subtitles, with extras including the trailer and more High Rising featurettes: a Bava interview ("Screaming for a Sequel"), a chat with assistant director Roy Bava about both films ("The Demons Generation"), "Demonic Influences" with Federico Zampaglione, and by far the best, "A Soundtrack for Splatter," with Boswell talking about his early days scoring Italian horror films and serving as the soundtrack consultant, including getting permission to use The Smiths' "Panic" by describing the film to Morrissey as an artsy dissection of the influence of modern media. (Technically, that would be true.) The stripped-down mass market version available from Diabolik and Amazon features the same superior transfer, the English audio track with optional subs, and the theatrical trailer.