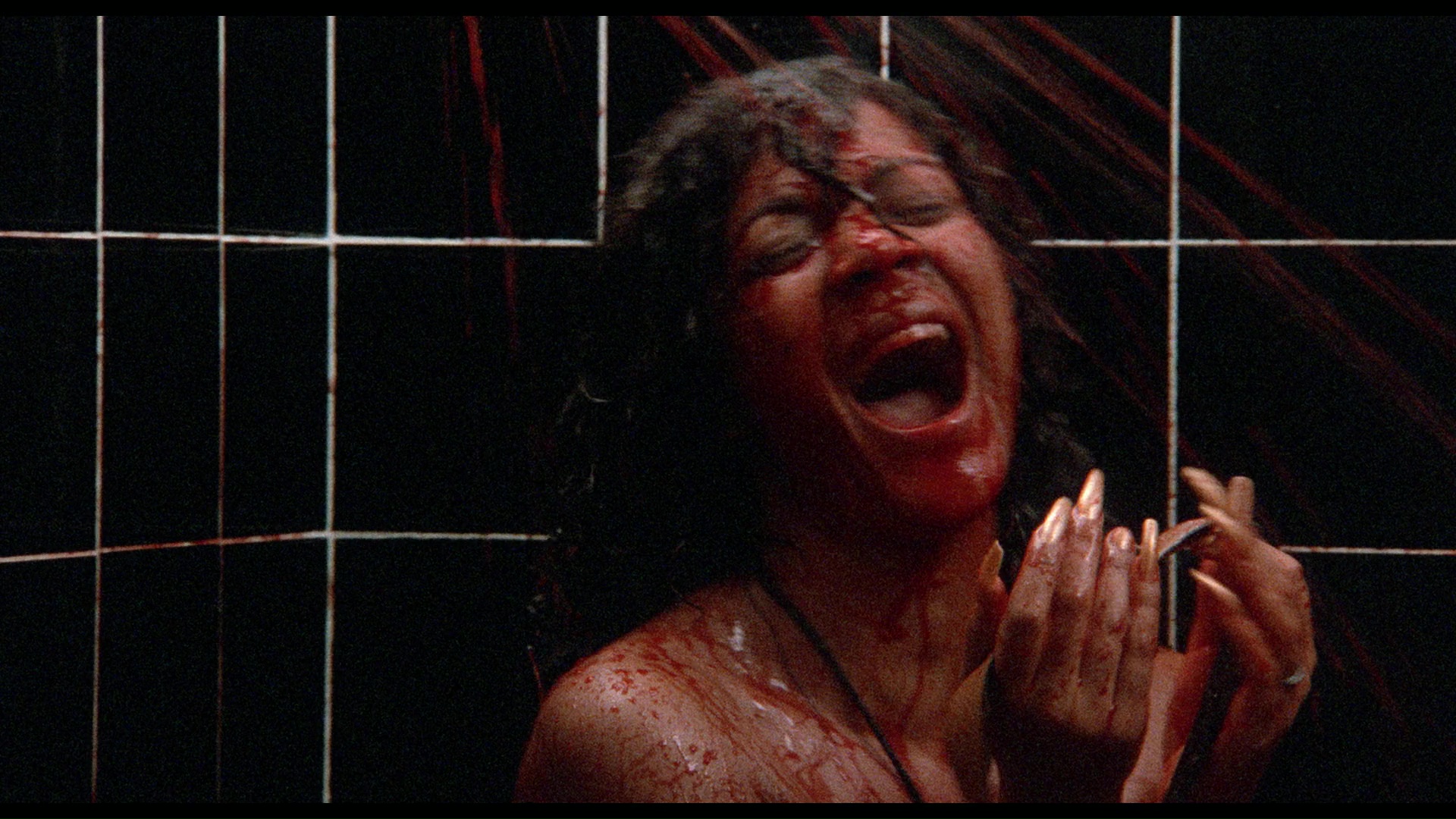 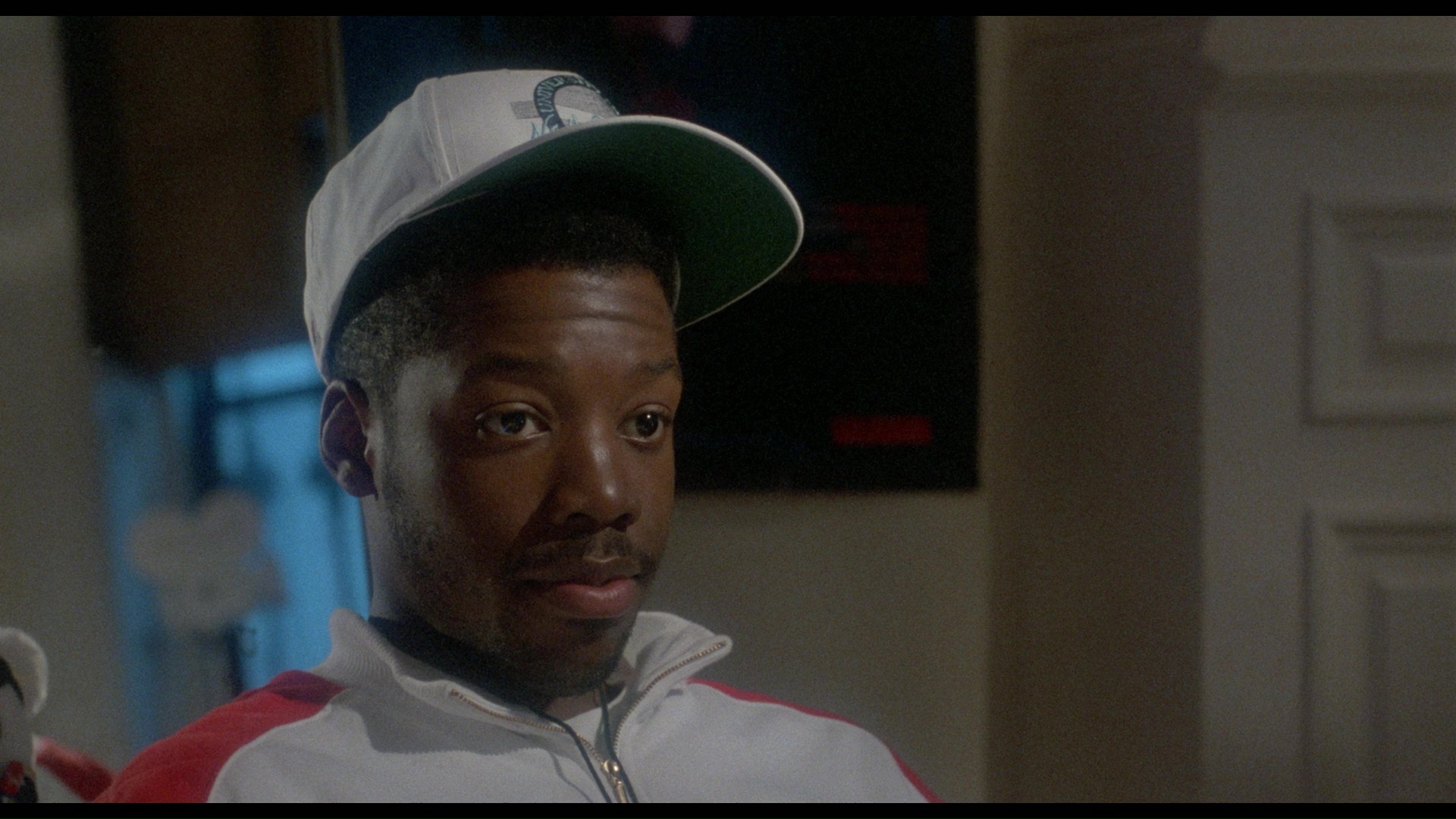 Tales from the Hood brought classic supernatural horror into the mainstream hip-hop era, some of Lee's compatriots had already cut their teeth on the idea at the tail end of the '80s with the underseen and still striking Def by Temptation. Troma managed to pick up the film during its post-production process, and as with previous gems like Combat Shock, the company struck gold with what would turn out to be one of its best pick-up decisions. The film went on to surprise a lot of adventurous VHS hounds back in the day, and it still stands as one of the most stylish efforts from a particularly bumpy era in horror history.

A beautiful, mysterious woman (Cynthia Bond) with "spooky eyes" and gold fingernails is preying on men at Brooklyn's watering holes, picking them up and then turning them into a bloody mess once they're in bed. Enter Joel (director James Bond III), a young man who's new to the city and struggling with his own religious beliefs. He connects with childhood friend K (Hardison, riding high playing Dwayne Wayne on TV's A Different World at the time), a fledgling actor who encourages his buddy to loosen up and enjoy the big city. Of course they're destined for a run-in with the seductive temptress, and a cop named Dougy (Nunn) who's been digging into the case for a year and might hold the key to stopping this unholy terror. 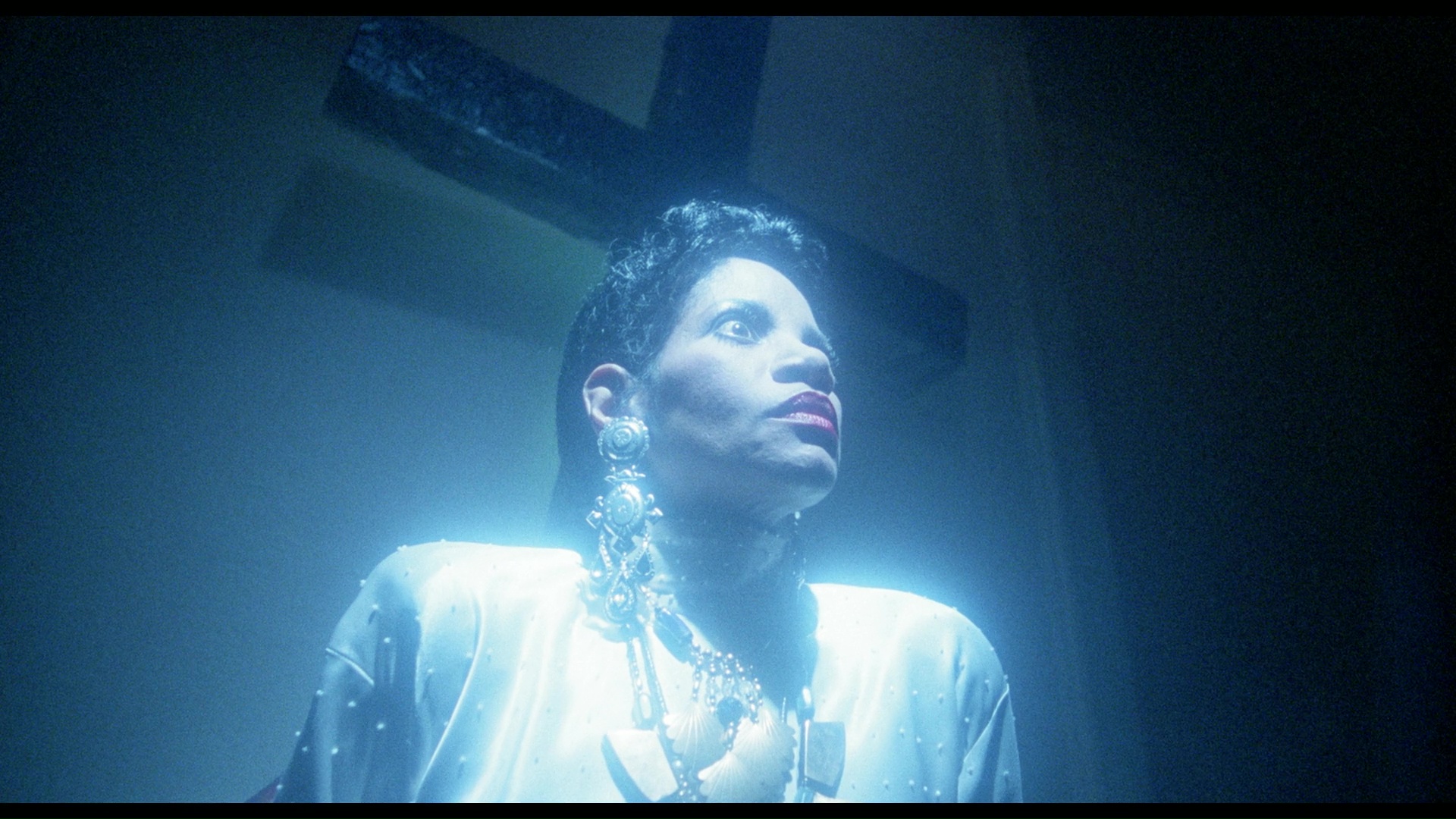 he never directed another film, Bond III (a child actor who also had a role in Lee's School Daze) made a number of smart choices when he put this film together. The best one of all is easily the 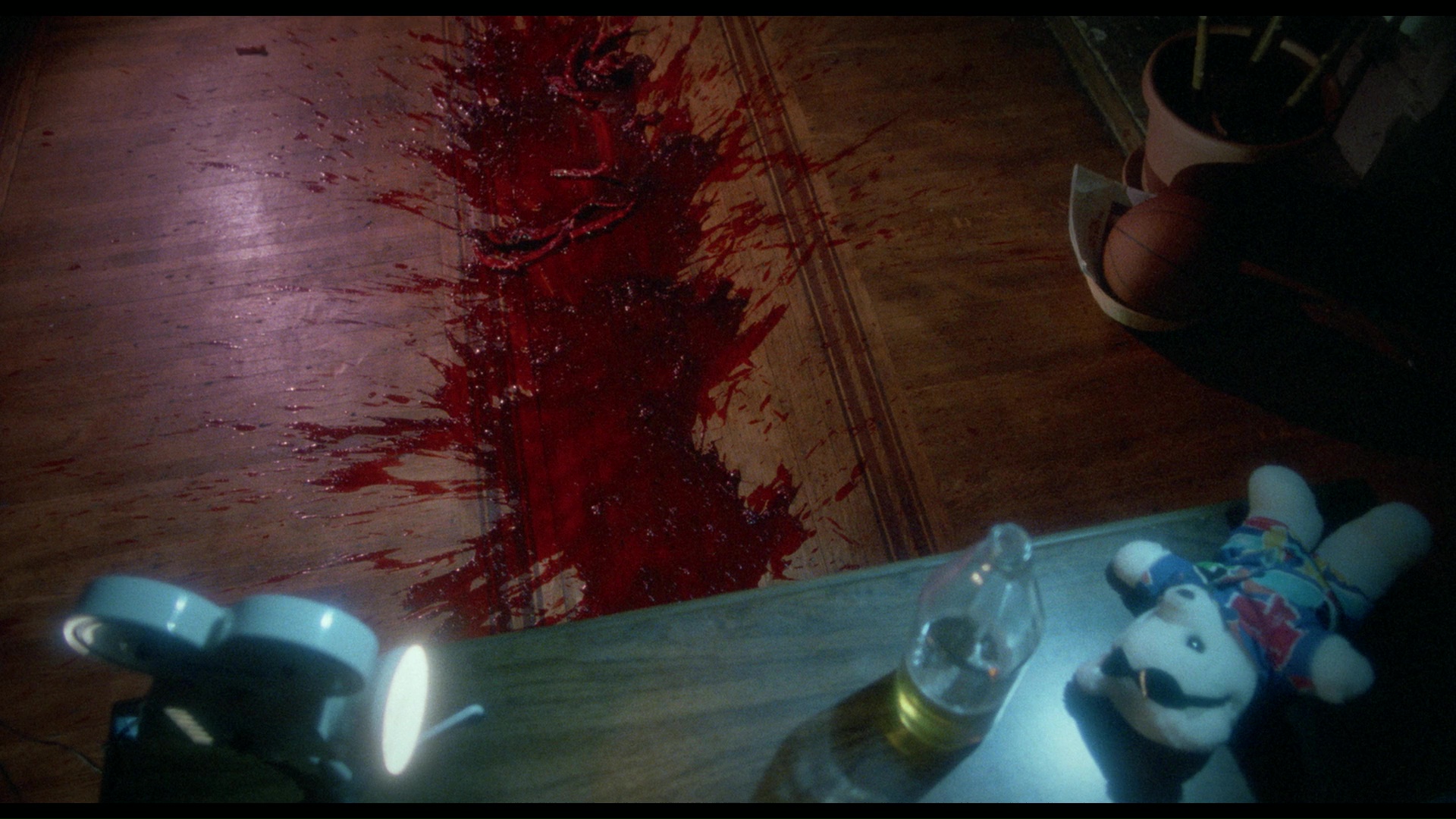 decision to have it shot by the great Ernest Dickerson, who shot all of Lee's through Malcolm X and injects this film with an insane amount of style and colorful intensity. Of course, Dickerson himself would go on to become a notable director including Juice and genre favorites like Bones and Tales from the Crypt: Demon Knight. The focus on the friendship between K and Joel, both transplants from North Carolina, gives the film a solid emotional core that plays nicely against the religious aspects of the horror elements, a unique spin on the succubus/vampire idea with just enough sex and gore thrown in to keep fans happy. Celebrity spotters will have fun, too, with a young Samuel L. Jackson popping up in a small but potent role as a late minister and R&B favorites Melba Moore (as a fortune teller) and Freddie Jackson even turning up to keep you on your toes (and grace the soundtrack as well).

Unfortunately if you didn't catch Def by Temptation in theaters (with some territories getting it through Shapiro-Glickenhaus), this was a difficult one to fully appreciate with its hyper-saturated colors getting seriously smeared in VHS, laserdisc, and 1998 DVD incarnations, with that last one tossing in some production stills and the usual unrelated Troma bonuses. They reissued the film with Jackson featured prominently on the cover, a move bound to confuse anyone who bought the disc just for him. Unfortunately Troma's DVD was taken from a heavily censored master (probably prepared for TV broadcast) with major cuts for profanity and nudity, so a lot of fans held on to their VHS copies instead. 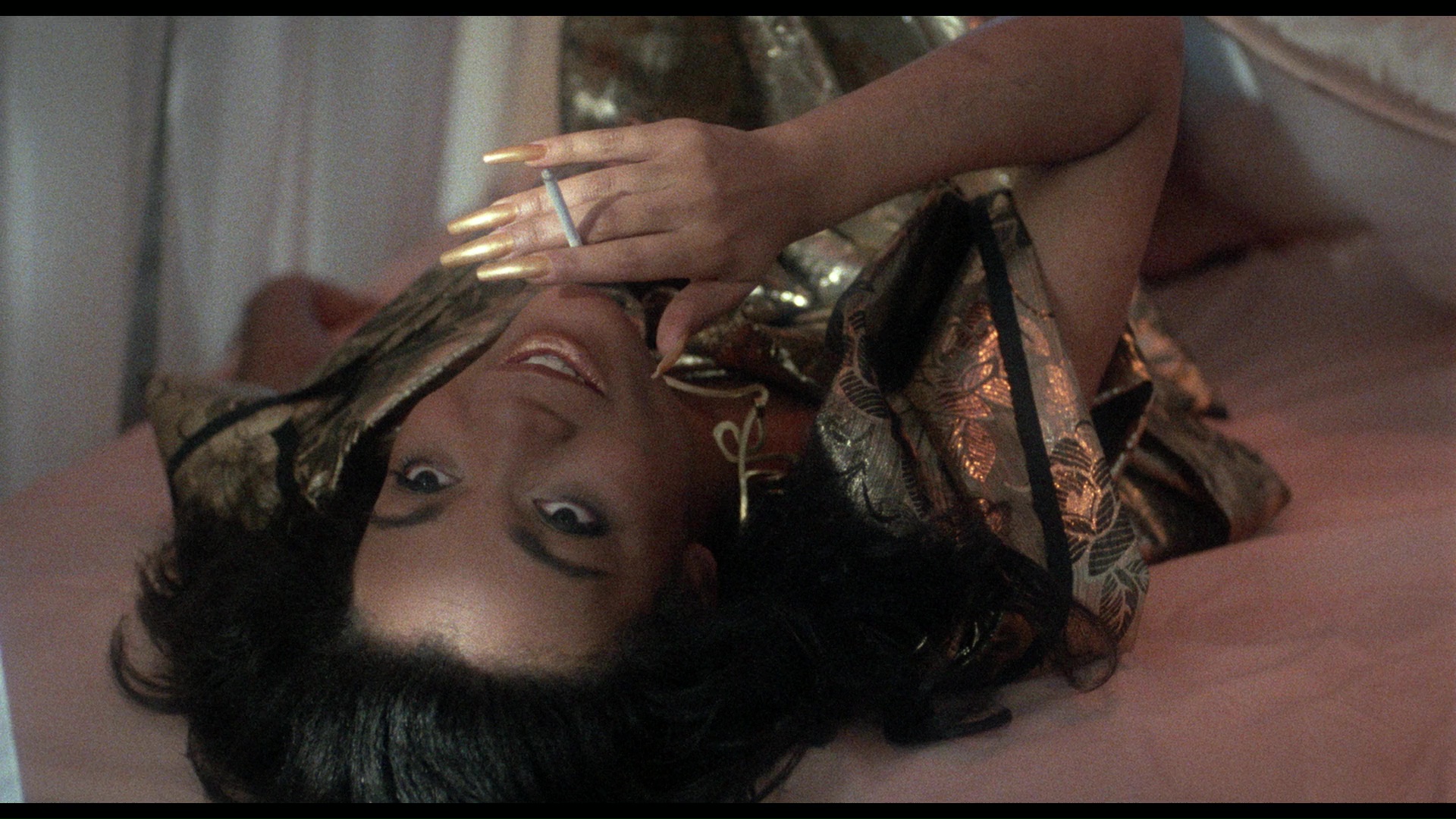 Fortunately you get the best of all possible worlds with the Blu-ray/DVD release from Vinegar Syndrome, which also comes with a 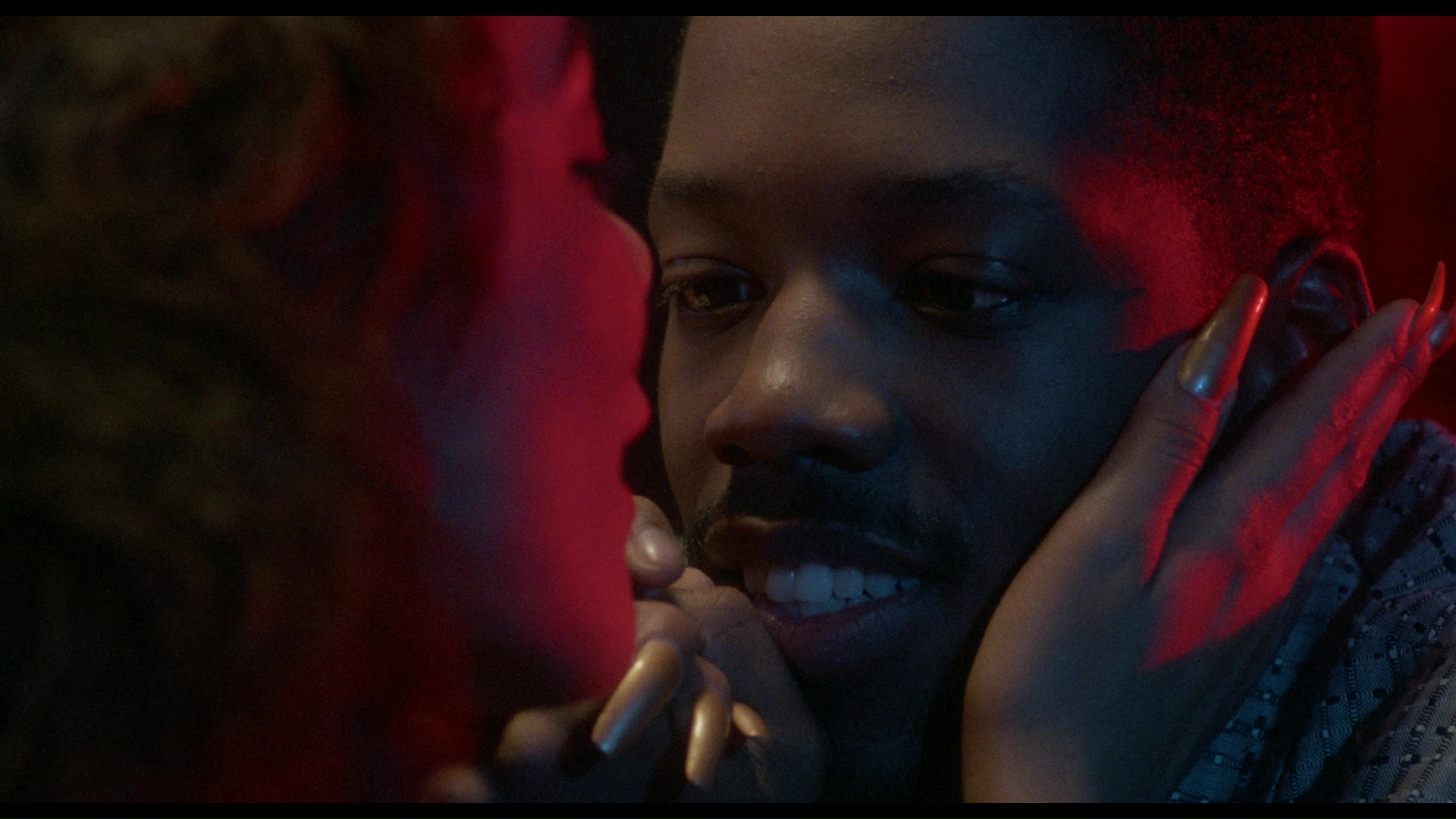 particularly striking limited slipcover edition directly from the label. The new 2K-scanned transfer from the original camera negative is a much, much easier on the eyes than past releases, finally snapping all those vibrant reds and blues into perfect clarity and doing a much better job of handling the darker, smokier scenes where you can now tell exactly what's going on. Likewise the DTS-HD MA 2.0 English audio sounds punchier than the DVD, and optional English SDH subtitles are included. The film can also be played with a career-spanning phone discussion between James Bond III and Vinegar Syndrome's Joe Rubin, covering everything from his early calling to take up acting through some of his significant roles and his segue into directing with this film, which sprang out of a connection to Go Tell It on the Mountain and involved a deep dive into researching horror and exploitation films. (He most definitely watched Videodrome.) He chats for the entire length of the film, and be sure to stick around till the end where he explains what he's been doing and why he turned down other film offers after this was released. Billed as a "candid conversation," "Ernest & Lloyd" (20m18s), which was recorded for one of the DVD reissues, is an amusing chat between Ernest Dickerson and Lloyd Kaufman about the process of bringing this film to Troma, the financial arrangement that got this film off the ground, and Dickerson's love of the horror genre that led him to do this right after Do the Right Thing. Another SD carryover is a brief appraisal from Michael Gingold (2m8s), who puts it in context as a pioneering title after a long lull since the likes of Blacula. He points out something really fun about the climactic monster, too. A gallery of promotional clippings and articles about the film (1m) is also included along with the theatrical trailer. 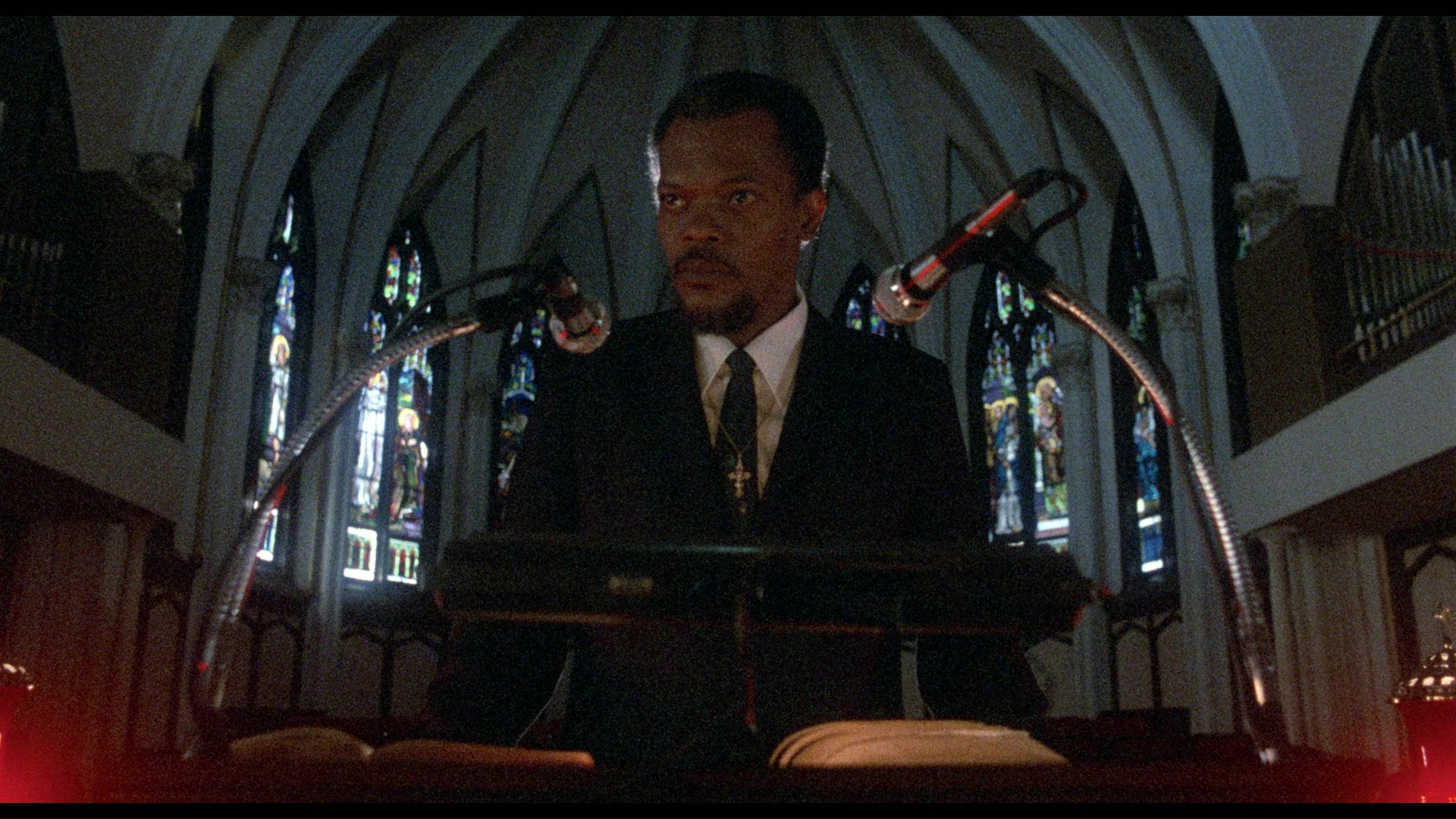 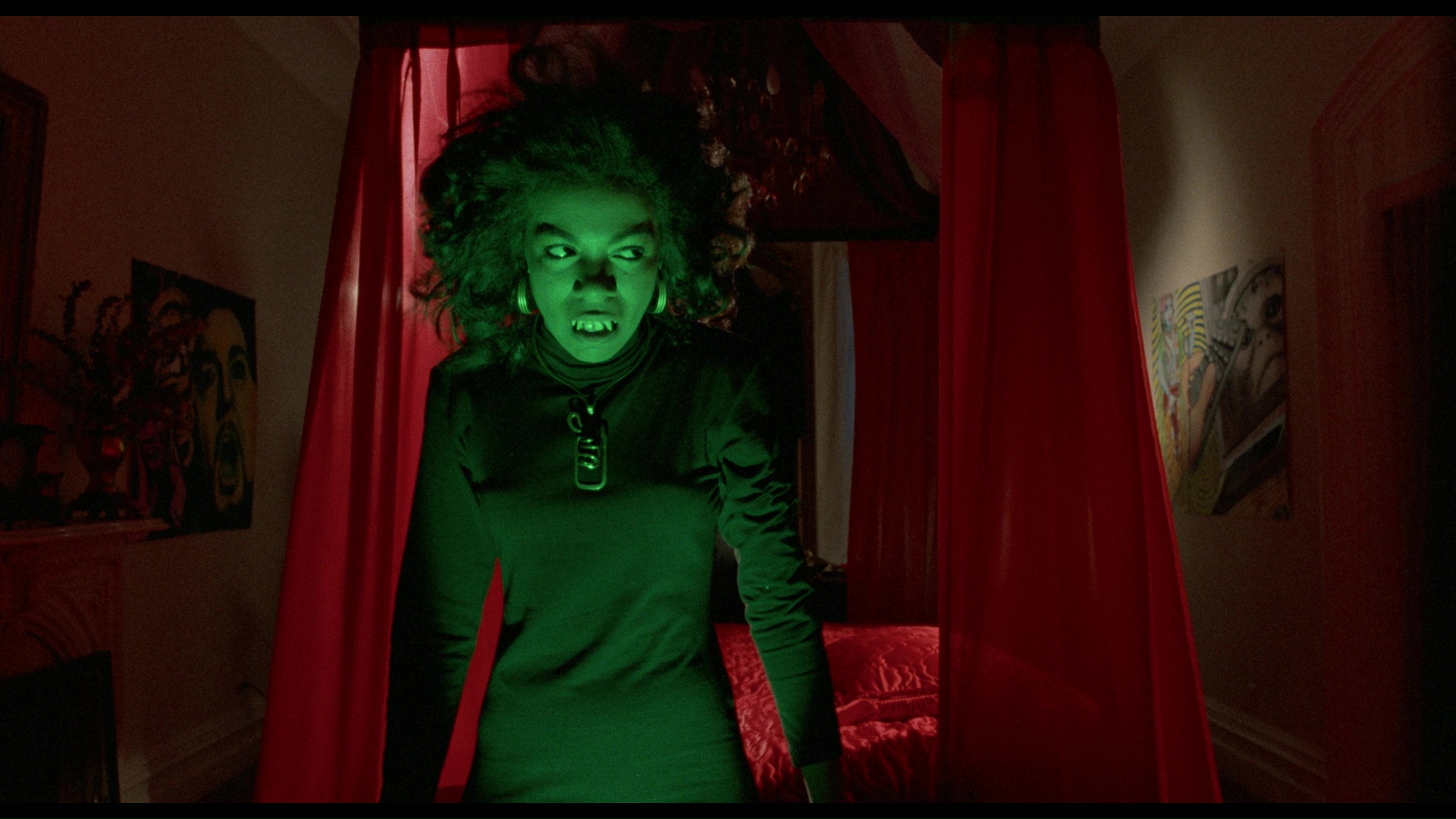 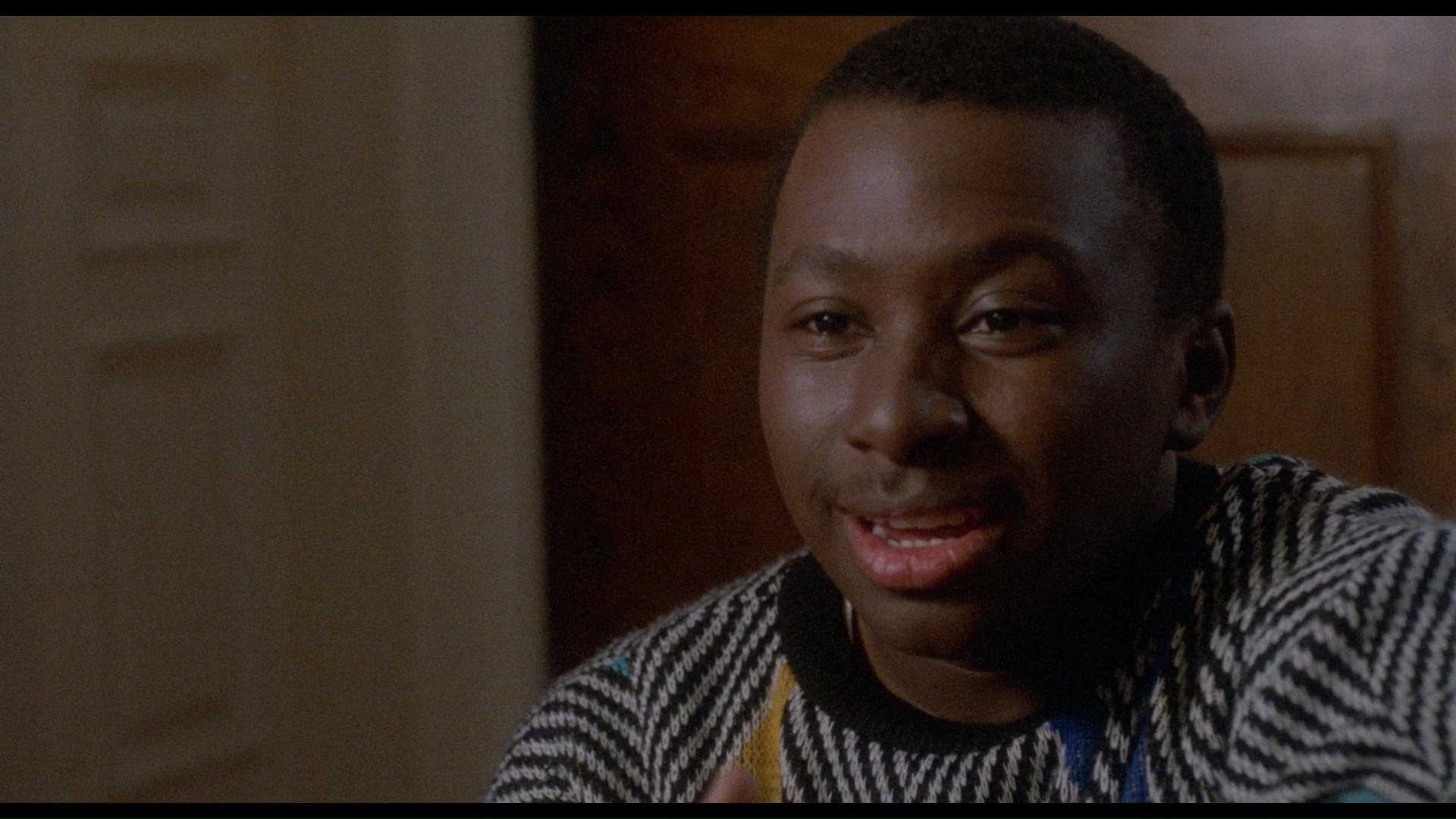 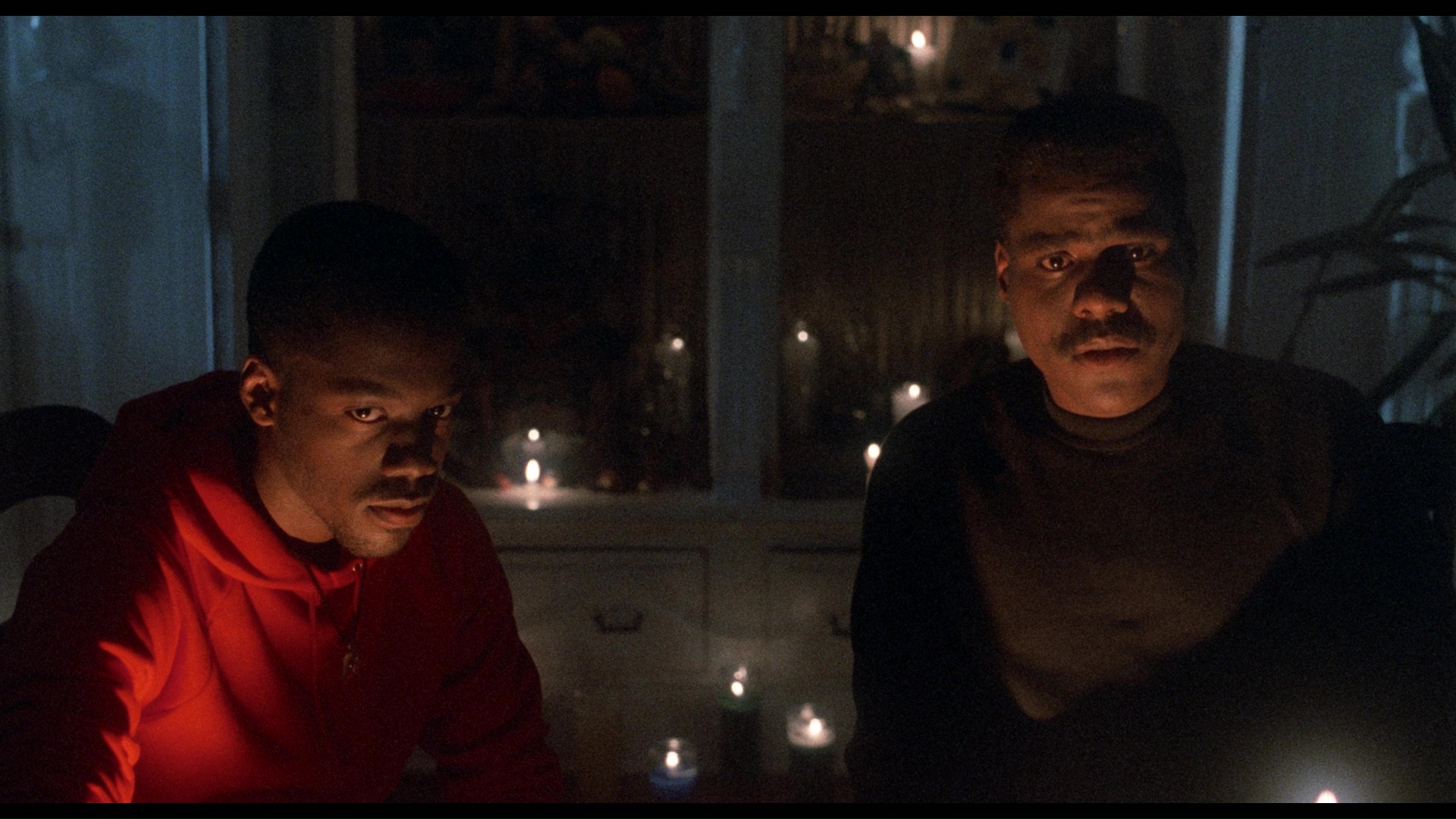