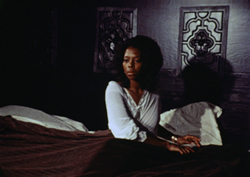 In 2003, a little film seemingly burst out of nowhere on DVD bearing the inexplicable but outrageous title, Death Bed: The 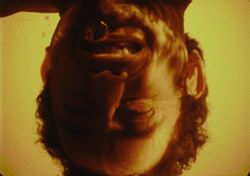 Bed That Eats. Horror fans had already encountered murderous houseplants, elevators, computers, even tomatoes -- but here was something different, a bizarre blend of arthouse surrealism, horror exploitation, and eccentric comedy. The story behind the film turned out to be just as strange; it was shot for a meager $10,000 in Detroit in 1977 by one-shot director George Barry, who envisioned it as a kind of dark cinematic fairy tale. The production was shot on 16mm without live sound, forcing it to be looped Doris Wishman-style after the fact. Never really released after its lengthy tenure in post-production, Death Bed languished in the vaults after American distribution plans went belly up and a possible British distributor took off with a pirated copy.

Fortunately for horror fans, said bootlegger distributed the film on video in the U.K., eventually earning enough curiosity to earn that aforementioned official DVD release from Cult Epics. Soon a genuine cult item was born (oddly one year after a Stuart Gordon-sanctioned Full Moon film called Death Bed popped up on video), with its reputation quickly soaring thanks to an extended riff by Patton Oswalt on his album Werewolves and Lollipops (though he slips up on the actual film's title a little bit). The fact that the film is at least a partially intentional comedy somehow slipped by a lot of people, with its low budget grittiness and dreamy lyricism probably making it tricky to decipher for newcomers. If you want something wild and utterly different, though, this one delivers 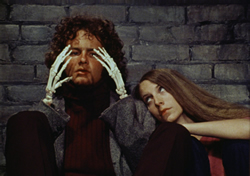 The film takes place mainly within the confines of a stone crypt, the only remains of a demonic house once constructed around a voracious four-poster created by a tree demon to seduce a human woman. Unfortunately the bed took things a bit too far and swallowed her whole, with the ghost of a Victorian artist (presumably illustrator Aubrey Beardsley) trapped in the same room within a hanging portrait. The first victims are a horny young couple who stumble through the woods and seek shelter for the night on the devilish mattress, which first gobbles up an apple, a bottle of wine, and a bucket of fried chicken before turning the randy pair into a bloody mess. Later, three young girls arrive and reckon with the evil powers of the bed, which decides one of them is too beautiful and alluring to wind up as demon chow. We also see flashbacks explaining the bed's history, including a stint with a quack doctor and a disastrous romp through New York.

Though most obviously a horror film (complete with skeletons and dripping blood every few minutes), Death Bed also fits snugly within the experimental conventions of the late '70s; in particular, Barry nicely evokes the whimsical, slightly perverse tone of arty underground filmmaker James Broughton, whose memorable 1968 short, "The Bed," 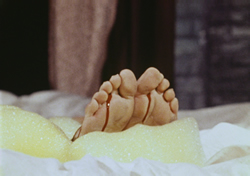 must have been a strong influence. The bed's activities are cheaply but effectively conveyed by showing a yellowish bubbling emerging from the mattress as an object or person sinks in, with a cutaway to the honey-colored, liquid interior where food and flesh are consumed (with humorous debris collecting at the bottom). Luckily Barry was still around to participate in the 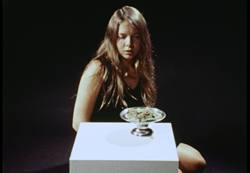 DVD release and theatrical renaissance for his film, turning up for a video introduction in which he laid out the story behind the film's creation, disappearance, and resurgence, a history reiterated in detail in a solid four-page insert with liner notes by Stephen Thrower, author of the superlative Nightmare U.S.A.

Given the film's popularity, it was inevitable that a Blu-ray edition would have to happen sooner or later, and eleven years later Cult Epics revisited it for a far more elaborate HD revisit. The new transfer looks about as good as possible considering there's only one 16mm film element in existence; detail is sharp and the colors look great, while the natural film debris (a speck here or a fleeting scratch there) have been left as is. Audio is presented in DTS-HD 5.1 or original mono, and in an interesting wrinkle, the drab softcore-style sax music recorded for the opening and closing credits has been replaced here with a tremendously effective piece by Cyclobe (of which Thrower is one musical half), which fits the mood of the film perfectly. (Don't worry, the original version of the opening credits is still included as an extra with the audio matched up to the HD transfer.) The 5.1 mix isn't anything too crazy apart from the music, with a little reverb thrown in here and there, so you're fine going with either option. The film can be played with the original SD director's intro or a new HD one with Thrower, who lays out some of the main reasons for its enduring appeal. Both of them are also on hand for a pair of featurettes: a 2013 revisit to the film's Detroit shooting locations (just shy of eight minutes), which features the pair having lunch with actor and current restaurateur Samir Eid (still sporting an amazing mustache), and a 15-minute conversation (with touch and go audio quality) at a diner in which they chat about the golden days of American regional horror filmmaking as profiled in Thrower's book. Tuck yourself in and enjoy.