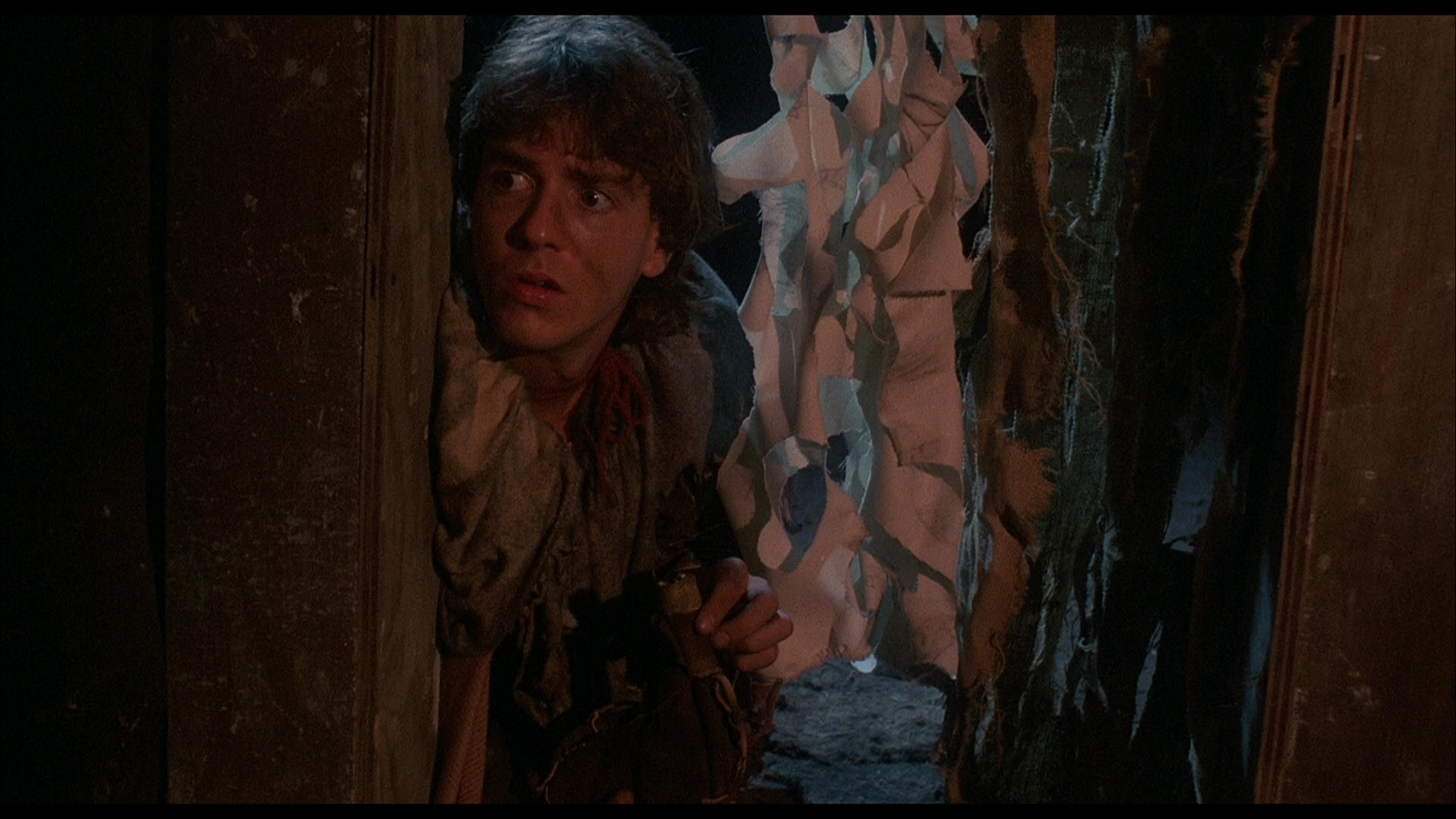 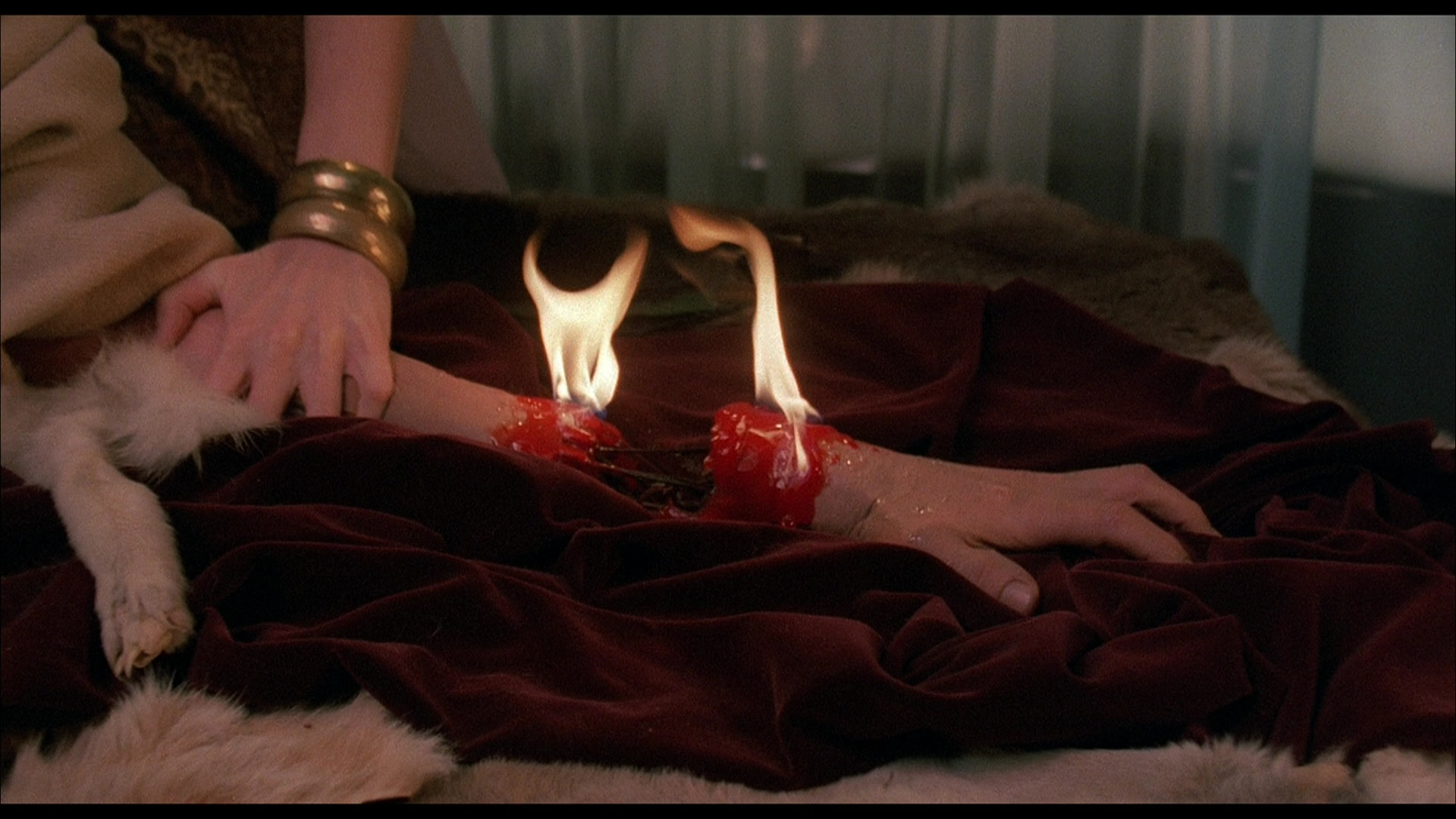 Sort of a mash up of Creepshow and The Company of Wolves, this horror fairy tale anthology was one of the biggest theatrical releases from Cinema Group, a short-lived '80s theatrical and home video outfit that brought us all Witchboard the same year. With supernatural horror gradually overtaking the slasher wave of the first half of the decade, it was a canny move for a film that performed even better as a regular VHS and cable TV favorite for years. The indie production shot around Westchester County between 1982 and 1985 came out just as star Scott Valentine was making it big as dim-witted Nick on the hit sitcom Family Ties, and even today its oddball mixture of latex-heavy horror and daffy humor makes it a fun late night viewing choice.

The framing device for this anthology involves a young boy asking his babysitting, T&A-loving Uncle Mike (Mesmer) to make up some new bedtime stories to send him off to sleep, which results in a trio of wildly inappropriate and grisly tales. In the Andy Milligan-esque "The Black Forest," the first and weakest story, a pair of diabolical witch sisters make life hell for their slave boy, Peter (Valentine), who's forced to watch as they go to gruesome ends to bring their late and even more diabolical elder sibling back from the beyond. However, when they set their sights on the wrong village girl to sacrifice, Peter has to spring into action. In "Little Red Runninghood," perpetually horny virgin and red clothing enthusiast Rachel (Picard) shakes herself out of an afternoon 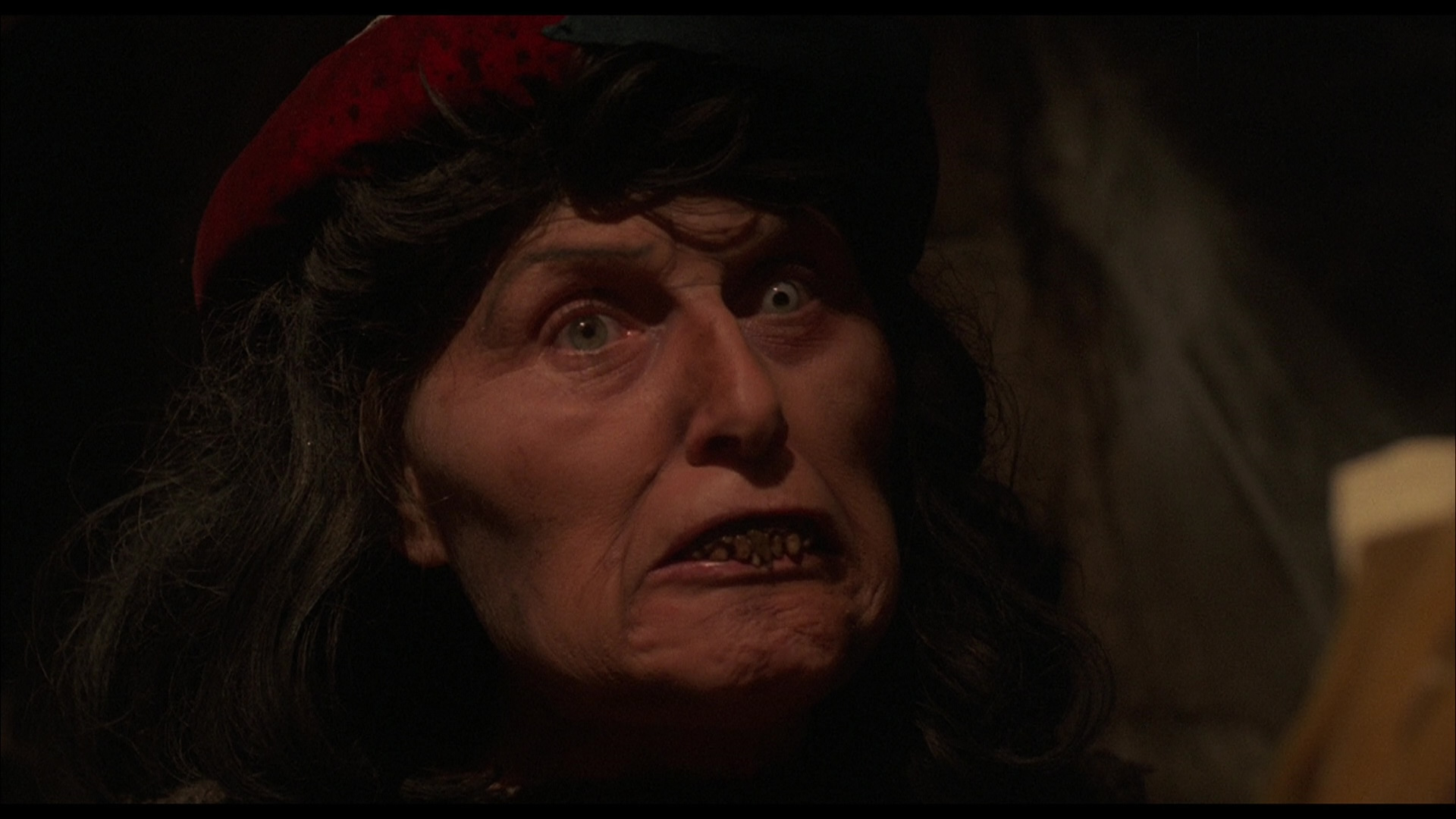 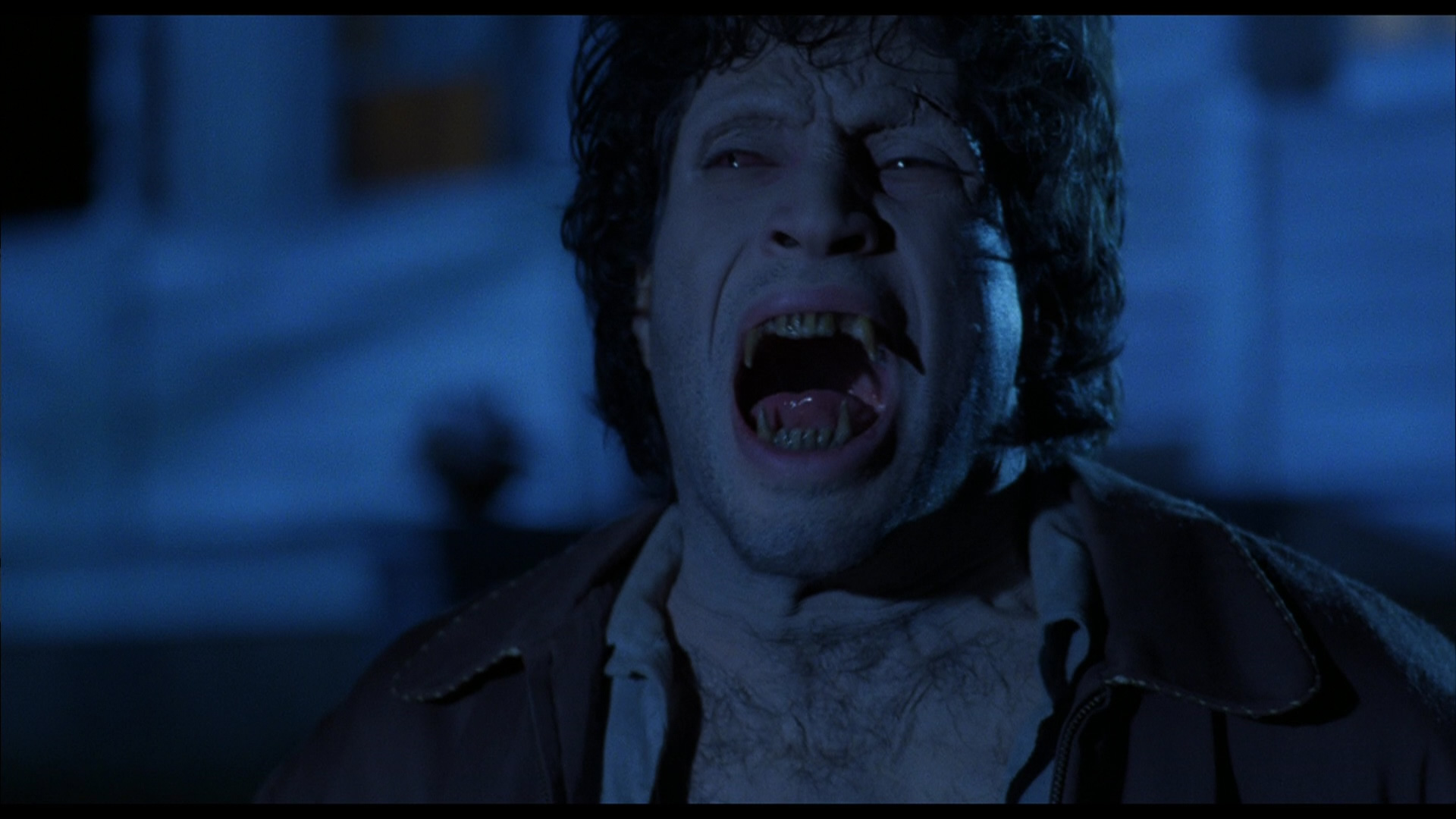 werewolf Willie (Mitler) can't get the sedatives he needs at the drugstore, so he turns fanged and hairy just as the moon rises and starts stalking the home of Rachel's cleaver-wielding grandma. After losing her virginity on an inflatable mattress in a shack, Rachel soon finds herself going face to face with the furry menace. The third and looniest story, "Goldi Lox and the Three Baers," features quirky aspiring crime matriarch Ma Ma Baer (future Oscar winner Leo) conspiring to break her husband and son (Hannon and Rule) out of a (very low security) criminal psych ward for a new round of antisocial antics. After robbing a bank, they're all surprised when they get to their hideout and find that the psychotic, neurotic, and clothing-averse Goldie Lox (Wild's DePrume, who's really fun here) has already set up shop and started her own body count with a supernatural twist.

Graced with a divisive but undeniably memorable opening theme song by "Taj" (that name checks George Romero and Brian De Palma!) and a daffy soundtrack combining synth by former adult film composer Larry Juris and rockabilly ditties, this one really benefits from its thick streak of goofy comedy (the postscript to the first story is actually pretty clever, and on a broader note, you even get a dogged cop named Jack B. Nimble). It's all kind of cheap and stupid, of course, but that's exactly what it was intended to be, especially when it goes into full-on cartoon and Yiddish comedy mode in the last story. Extra points for the equal opportunity and totally gratuitous nudity from Valentine and de Prume, with the latter's lengthy topless shower scene making this a favorite among cinema skin fans for decades. 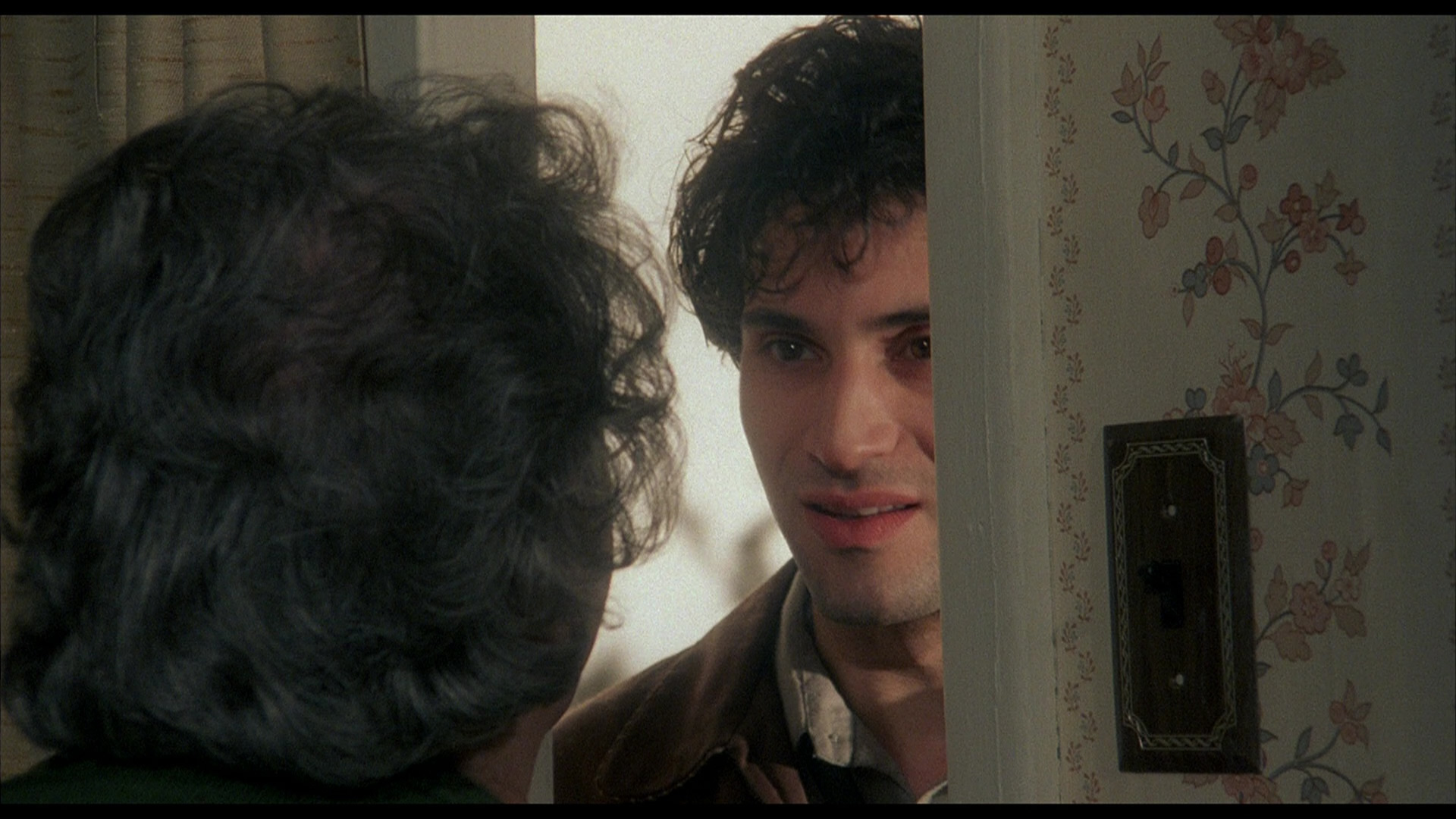 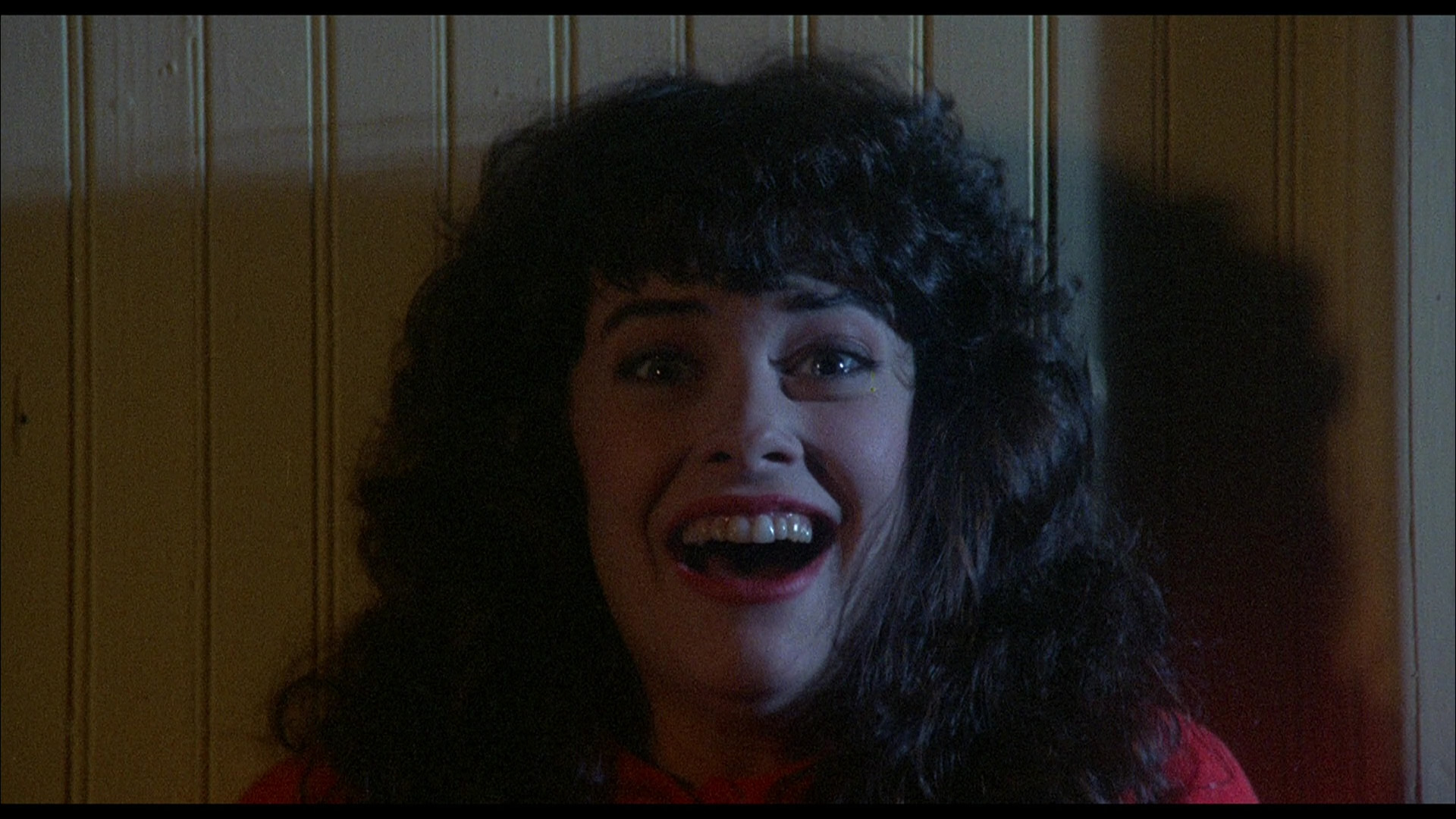 on top of it for a truly unwatchable experience. (Here's a sample, if you dare.) Those releases did plenty to trash this film's reputation for a while, but thankfully it's been given an unexpected shot at redemption from Scream Factory courtesy of a new special edition on dual-format Blu-ray and DVD with a sparkling, crystal clear transfer from the original negative that blows away any other version you've seen before, including the underwhelming theatrical prints. It literally looks like an entirely different film from start to finish. (The prior DVDs were also transferred at the wrong speed and clocked in at 80 minutes, which is corrected here.) The DTS-HD MA English mono track sounds robust enough, with optional English subtitles.

It's worth noting that there's a lot more in the special features department here than what's indicated on the packaging (though the Scream Factory site listing is correct), which only promises an audio commentary with director Jeffrey Delman and, incredibly enough, interviews with Leo and Valentine. That actually sells this short as you get a raft of goodies that will definitely increase your appreciation for this scrappy, low-budget effort many times over. An on-camera Delman interview, "I Like the Grotesque" (15 mins.), covers his decision to go into the world of horror filmmaking and the reading material about fairy tale psychological that influenced him. He also chats about this film's connection to Nightmare, too. He also chats about how Leo and Valentine were studying with the same acting teacher at the time, which ended up in their being cast in the film among other SUNY Purchase students. Incredibly, Leo also had a broken arm during shooting, and you can see the peculiar measures the filmmakers took to cover up the cast when she had to wear it for a few scenes. 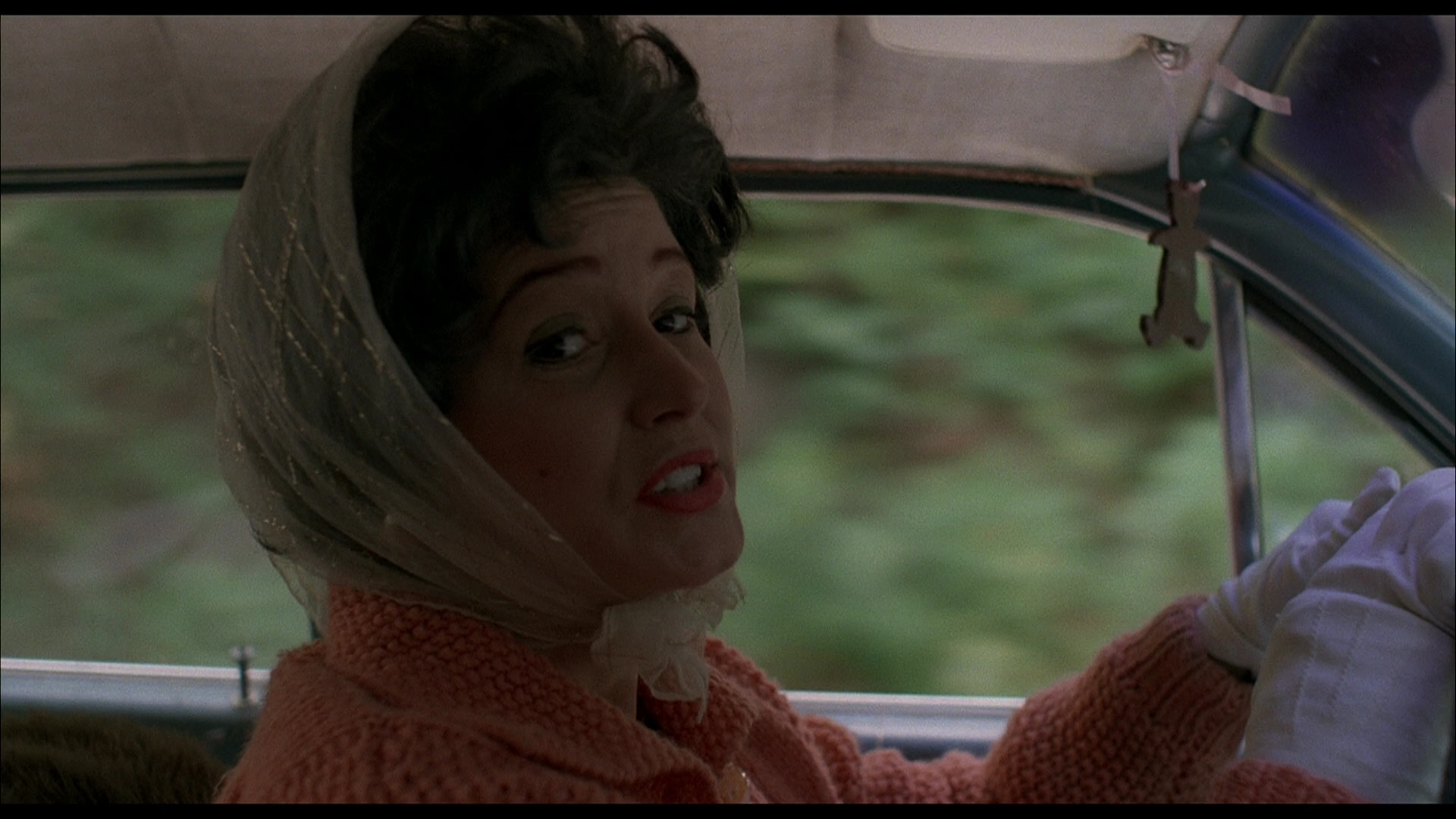 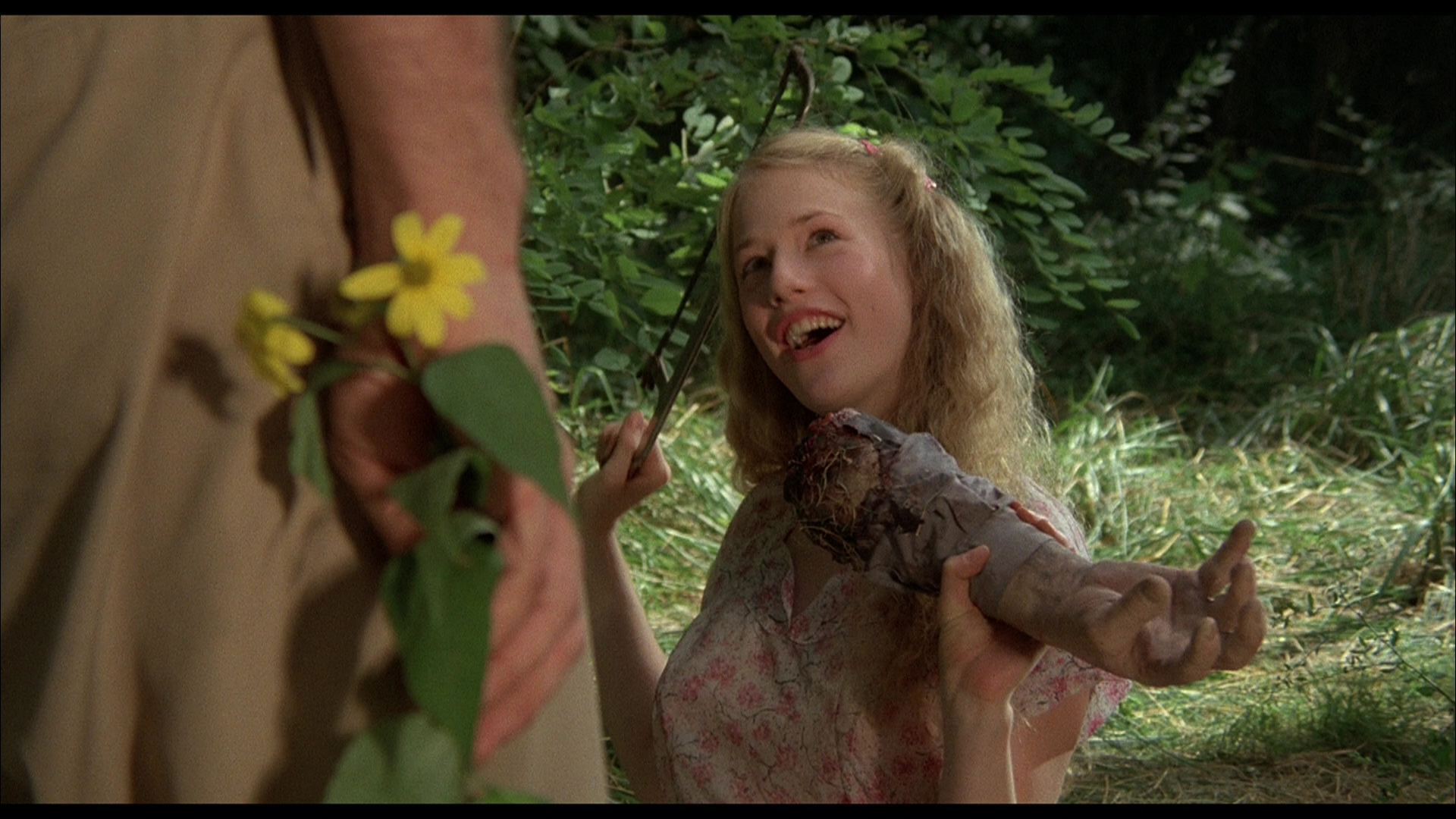 "A Band of Gypsies" features a very enthusiastic DePrume, Leo, and Valentine, with stories including Valentine's massive accident that resulted in a hip injury before shooting and Leo's reaction to seeing the film advertised in public for the first time. An earlier 30-minute version of "The Black Forest" shows what the segment was like before it was extensively reshot and when it was potentially planned as a standalone feature, with several scenes notably playing out in a different order. A 2-minute bit of deleted scenes with a director intro features a slightly racier opening for "Riding Hood" with some near nudity and an extra bank robbery gag from the "Baers" story, both sourced from VHS. Also included are two theatrical trailers (full frame from older video sources, though a gorgeous remastered version of the standard trailer can be seen on the third Trailer Trauma) and a 4-minute gallery of video sleeves (including the dopey international title, Freaky Fairy Tales), production stills, storyboards, and fun behind-the-scenes shots. The commentary is solid as well with Delman going solo for a trivia-packed tour through the film including anecdotes about pretty much every single person on the screen (the little kid, Brian DePersia, is now a Hollywood agent!) and details about the ins and outs of building a water well, the performers who came back for reshoots long after the fact, and the various locations including Connecticut and "a porn studio in Queens, which was about as disgusting as that might sound." Plenty of gory, goofy fun, especially if you love the flavor of DIY '80s regional horror movies.