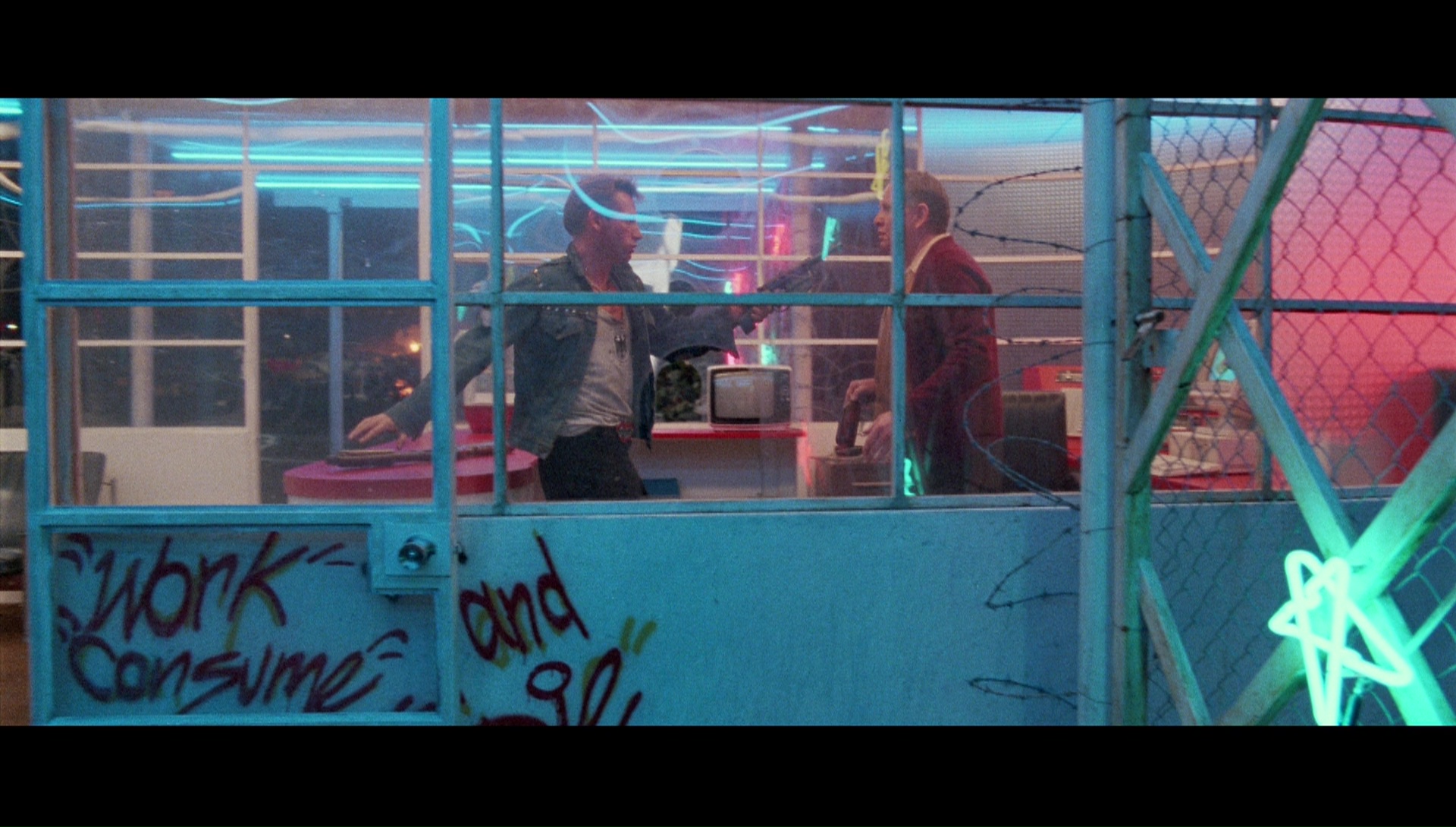 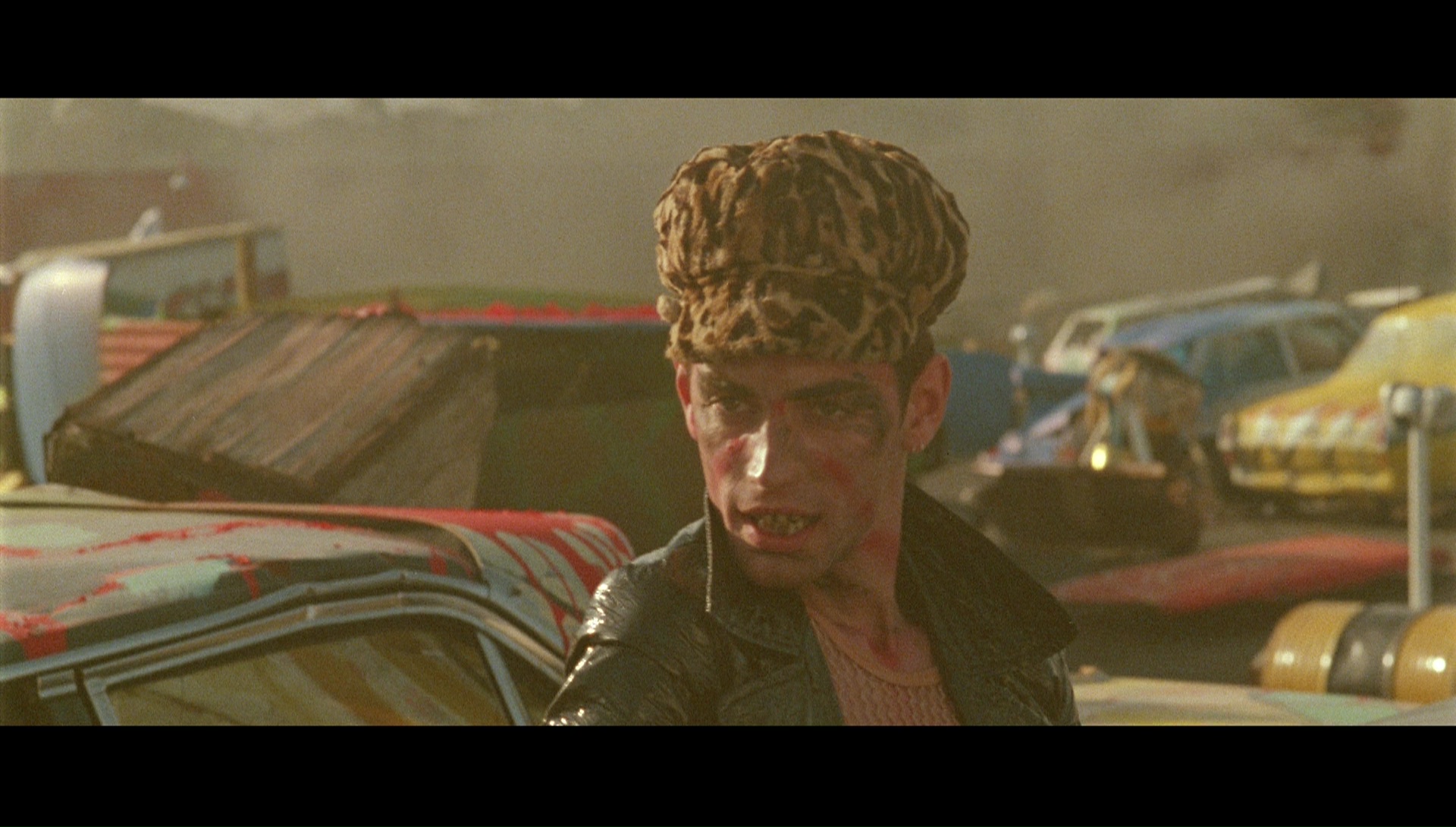 Among the few regular drive-in directors in Australian movie history, none have enjoyed a career as bizarre and surprising as Brian Trenchard-Smith, who first really established himself with the wild actioner The Man from Hong Kong and really pulled out all the stops with films like Stunt Rock. His 1986 sci-fi oddity Dead End Drive-In came at the height of his theatrical career and was released in America by the post-Roger Corman iteration of New World Pictures during one of its busiest years (also including the likes of Vamp, Reform School Girls, and House). This actually marked Trenchard-Smith's second foray into dystopian science fiction after the gory Escape 2000, originally released as Turkey Shoot; in fact, that film makes a cameo projected in the titular drive-in here (along with snippets of The Man from Hong Kong) and serves as a reminder of some of the similarities between the two, especially the idea of a futuristic, political concentration camp that becomes the site of a violent escape attempt.

In the future, the government has decided that unruly teenagers have run so rampant that they must be quarantined inside drive-in theaters where violent entertainment and junk food will be enough to appease their base instincts. This seems to work for some who are content to wallow in punk outfits among the neon-drenched decor, but for inmate Crabs (Manning), the artificial society is something to be rejected so he can get back to his family after getting stuck at the drive-in while out on a date in his brother's car. His girlfriend, Carmen (McCurry), finds her faith tested as he decides to put his plan into action, turning nonconformity into an explosive bid for freedom.

Borrowing the dusty post-nuke look from A Boy and His Dog but injecting it with some new wave '80s flair, Dead End Drive-In manages to cruise along surprisingly far on its catchy concept. You get plenty of Mad Max-style car culture nods and automotive 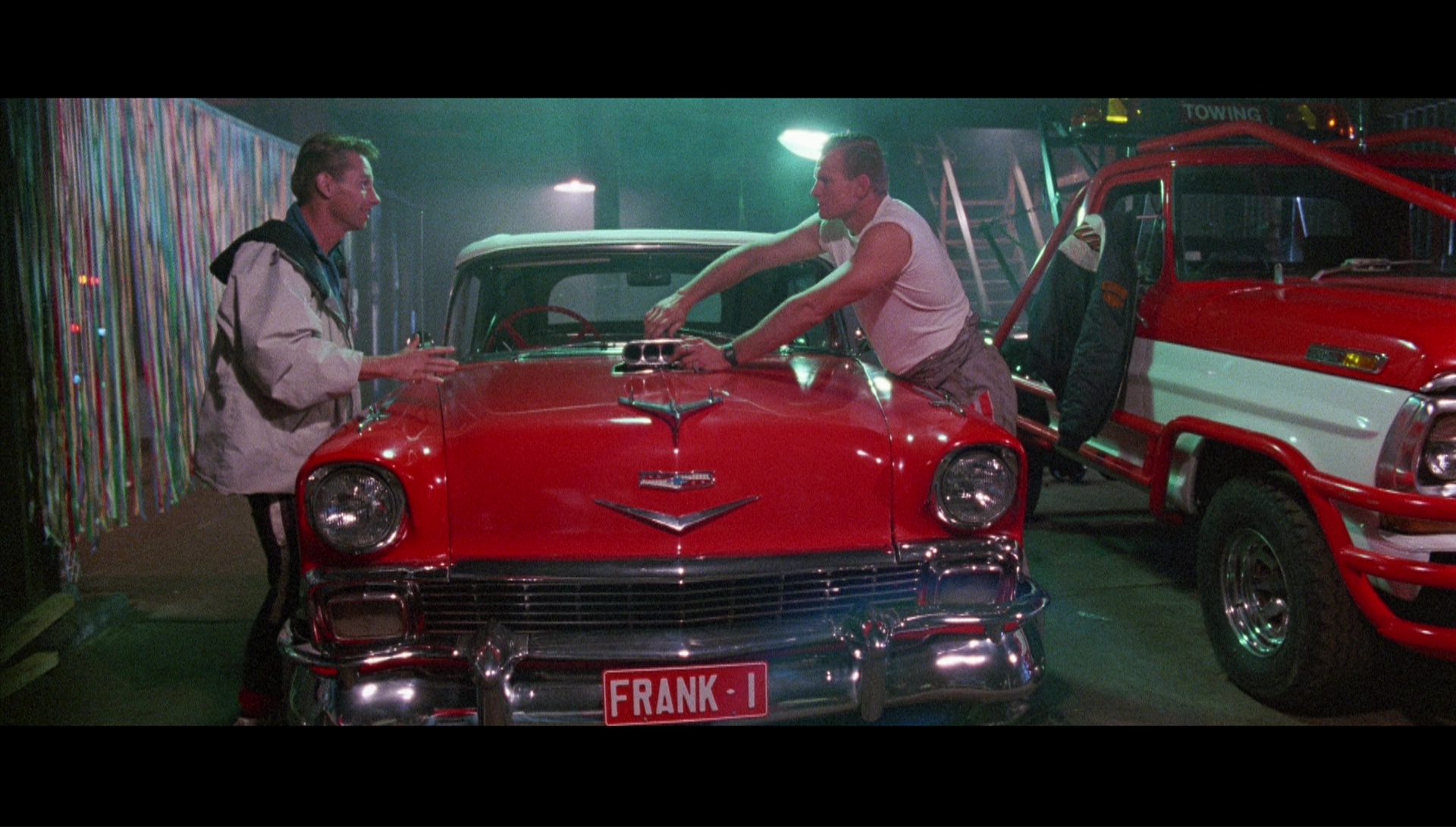 mayhem (including a pretty impressive stunt-laden finale), some snarky pre-Battle Royale social commentary about the government's panicky treatment of its adolescents (with 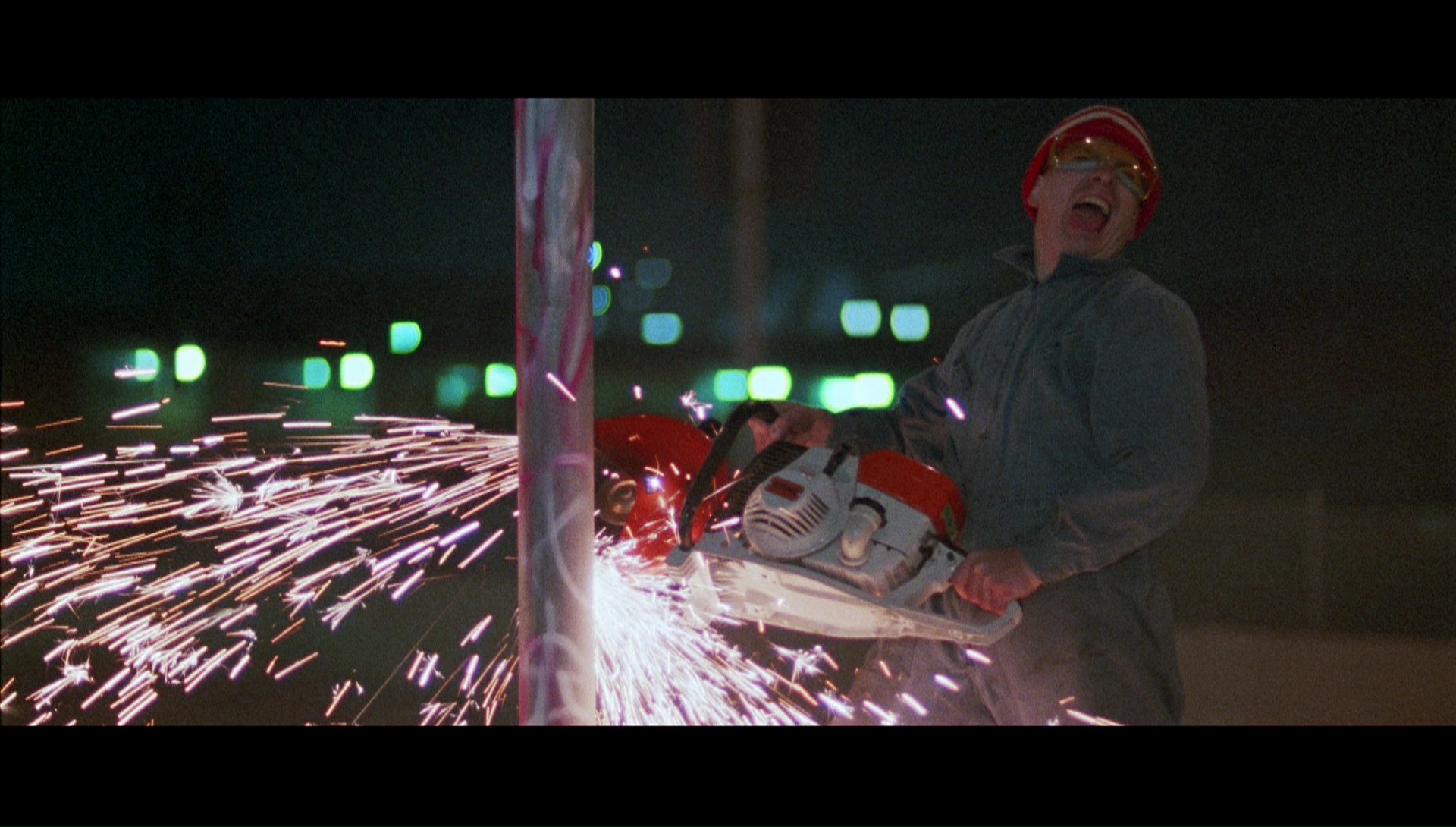 some RoboCop-style jabs at the media and consumer culture for good measure), and a low-grade but tasty '80s soundtrack that should have reaching back in your collection for an old Mental as Anything album. The end result wasn't a major box office hit but went on to amass a respectable cult following on VHS, with Quentin Tarantino more recently giving it a boost by citing it as his favorite of Trenchard-Smith's films coupled with its coverage in the great documentary Not Quite Hollywood. (Originally, New World planned to redub the actors with American accents but decided against it after hearing their rejiggered soundtrack upon completion; the mind boggles at what it must have sounded like.) Not surprisingly, Trenchard-Smith's career remained wildly unpredictable even after the theatrical market for these kinds of films dried up; just consider that he went on to helm the very good The Siege of Firebase Gloria, the certifiably insane Night of the Demons 2, the deliriously stupid but beloved Leprechaun 3 and Leprechaun 4: In Space, and the insanely obscure Pimpin' Pee-Wee.

The first DVD of Dead End Drive-In came from Anchor Bay back in 2003 and looked fine for the time, preserving the original aspect ratio and looking pretty comparable to most mid-'80s low budget film transfers (read: lots of bright colors and inconsistent, sometimes milky black levels). That version contained a commentary track with Trenchard-Smith Trenchard-Smith that's typically amusing and nicely structured as he kicks off by describing this as a cross between Mad Max and The Exterminating Angel before he launches into memories of all the major actors and thoughts on the '80s Aussie film scene. Image Entertainment revisited the film with just the trailer in 2011 from the same master, while the UK got its first DVD in 2013 courtesy of Arrow under its cult "Arrowdrome" DVD banner. The Arrow transfer looks pretty comparable to its predecessors and is most likely from the same source. It's a bit surprising no one jumped on this one in the UK before this, but better late than never. Extras include the theatrical trailer and appreciative, very detailed liner notes by film writer Cullen Gallagher, who covers everything from the Peter Carey short story that inspired the script to some scenes scrapped from the final cut and initial plans for a sequel that was never meant to be. 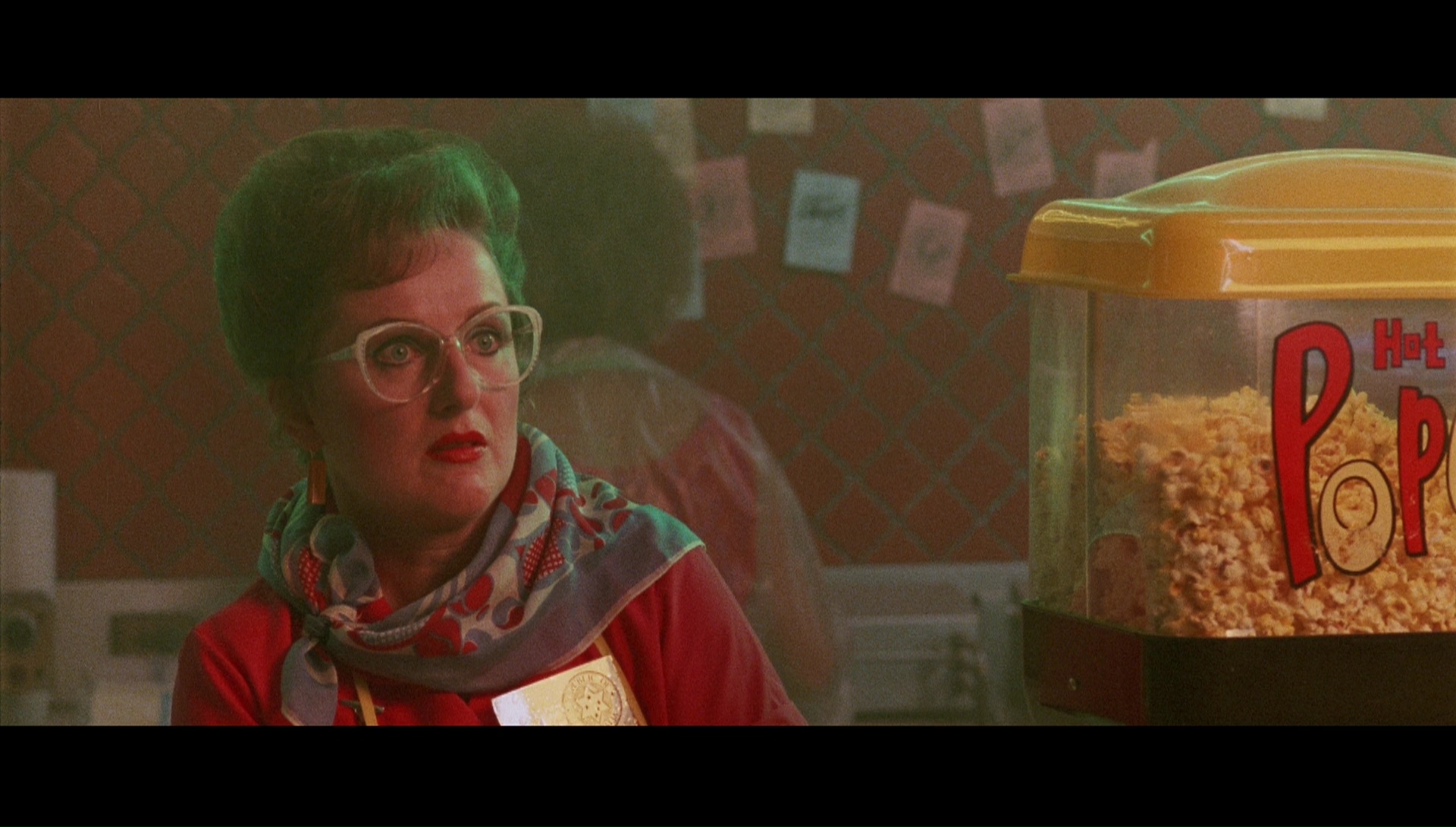 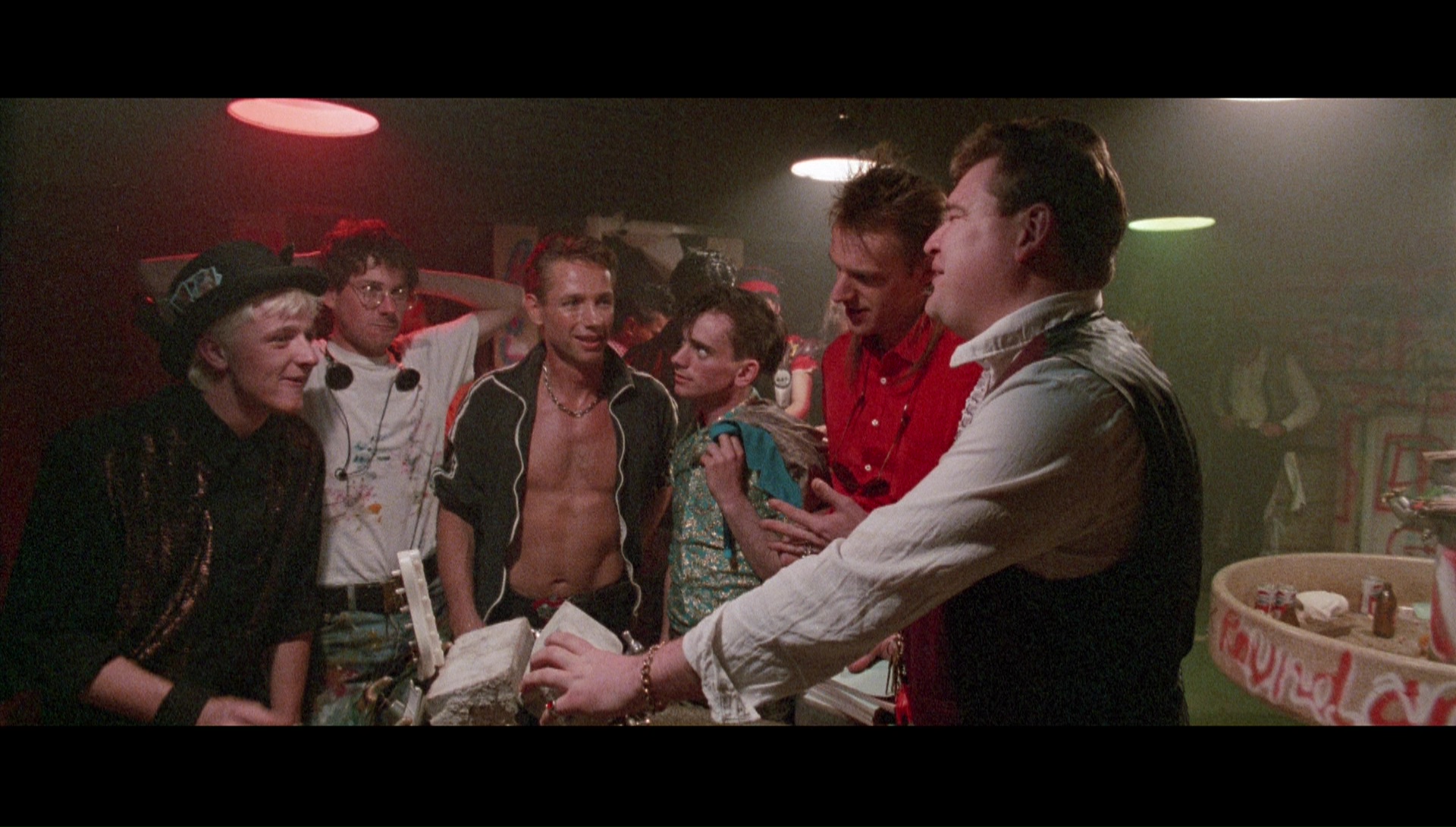 In 2016, Arrow revisited the film for a simultaneous Blu-ray release in the U.S. and U.K., at last with a worthy slate of special features. The new 2K transfer is a nice step up that resolves the neon colors more coherently than the now-dated SD version we've been stuck with for a decade, and film grain is more natural and detail throughout with a stronger sense of depth. No problems here at all really. The LPCM English mono audio with optional English subtitles sounds perfectly fine considering this isn't the most dynamic track to begin with, mostly giving support to the crashing sound effects and the fun electronic soundtrack. The Trenchard-Smith commentary makes its first appearance here in years, while the video extras start off with "The Stuntmen," Trenchard-Smith's 48-minute TV doc from 1973 about legendary Aussie stunt guys like Grant Page and Bob Woodham. Shot in 16mm and presented here from what looks like an SD master, it's a fun, funky film with lots of motorcycles, cliff jumping, and interviews with these madmen who risked their lives to entertain millions. Trenchard-Smith's quite astonishing 1978 public safety film, "Hospitals Don't Burn Down!" (24 mins.), comes from a superior HD source and is an atmospheric, surprisingly sinister little piece about the dangers of smoking and other potentially incendiary risks as it ramps up to a wild, Towering Inferno-style narrative. It's easy to see how this might traumatize younger viewers, and it's worth picking up the disc for this crazy bonus alone. Also included are the theatrical trailer, a Vladimir Cherepanoff gallery about '80s Sydney graffiti writers, and in the first pressing only, an illustrated booklet with the original liner notes by Gallagher and new ones by Neil Mitchell.