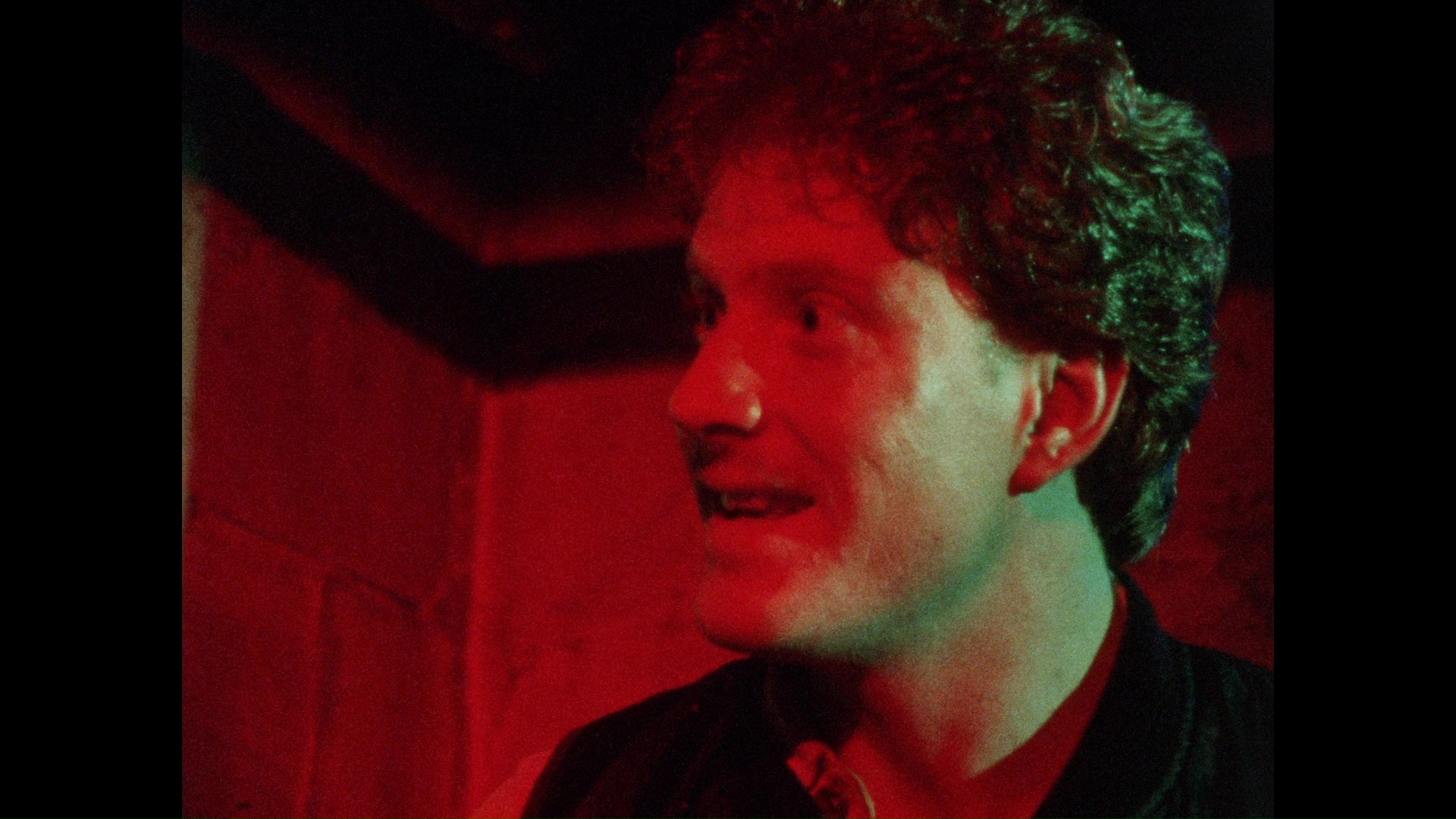 key entry in the indie gore 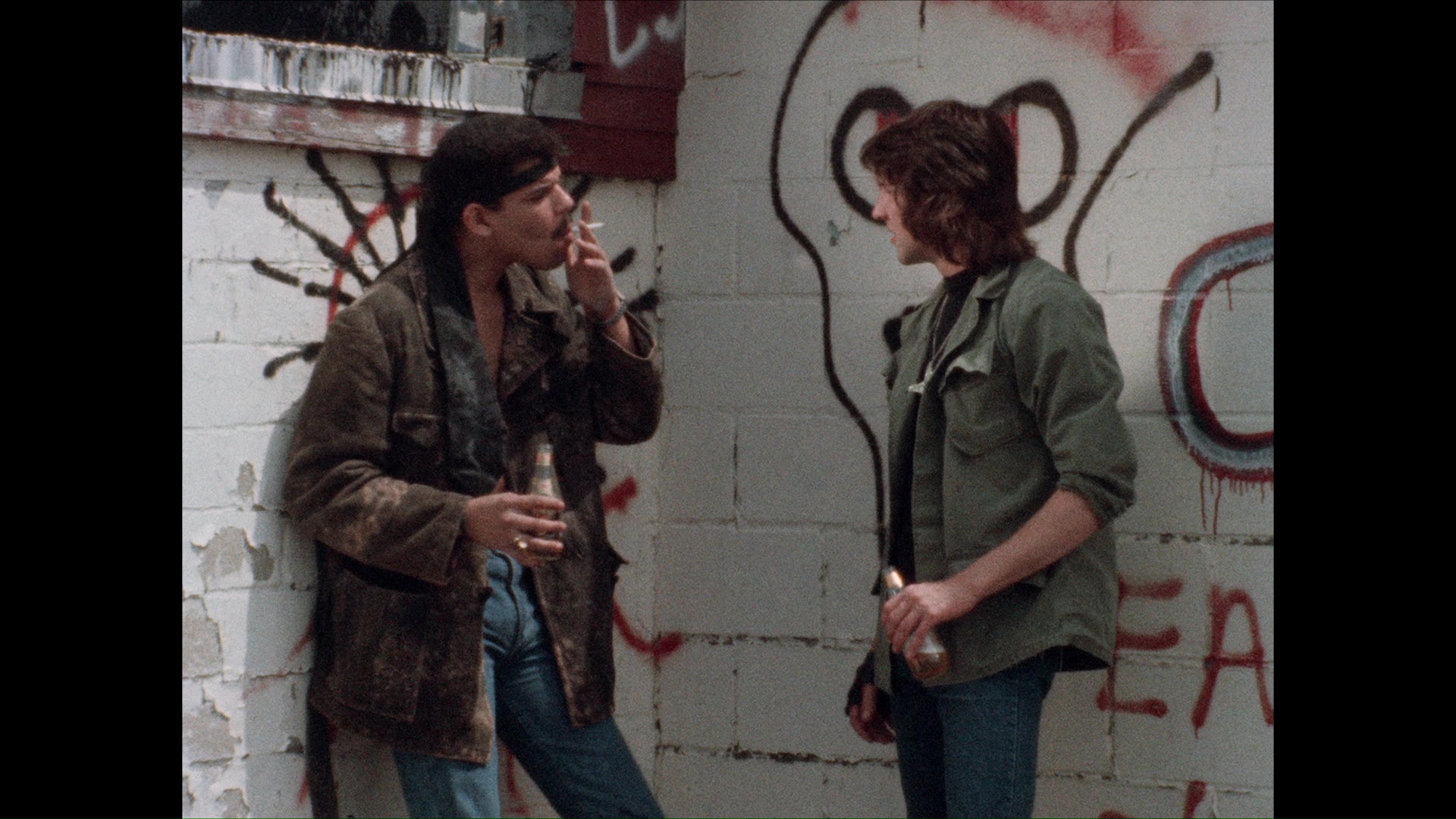 sweepstakes of the glorious 1980s, Deadbeat at Dawn quickly joined the storied company of films like Combat Shock and Street Trash, all very low budget films distinguished by their imaginative camerawork and extreme, hyperbolic violence. What sets this one apart is its aim to be a kinetic, hallucinatory action film, and on that front it succeeds far beyond its limited means. While director and star Jim VanBebber had been cutting his teeth on short films for ten years, he decided to produce his 16mm street gang opus as a feature film and quickly drew the attention of fanzines and connoisseurs of violent cinema around the world.

The storyline itself consists of virtually every trope from the late '60s or early '70s mob or gang film of your choice, then tossed into a blender. Goose (VanBebber), the leader of a gang called the Ravens, decides to call it quits thanks to the urging of his occult-fixated girlfriend (Murphy). When he learns that his boys are soon to be joined with a rival gang called the Spiders (or the Spyders, depending on which graffiti you read), Goose thinks the time is right -- at least until Murphy turns up dead despite his efforts to protect her. Determined to seek revenge and live his life without fear, Goose locks horns with his evil rival, Danny, and unleashes a torrent of streetfighting and kung fu fury on his enemies. 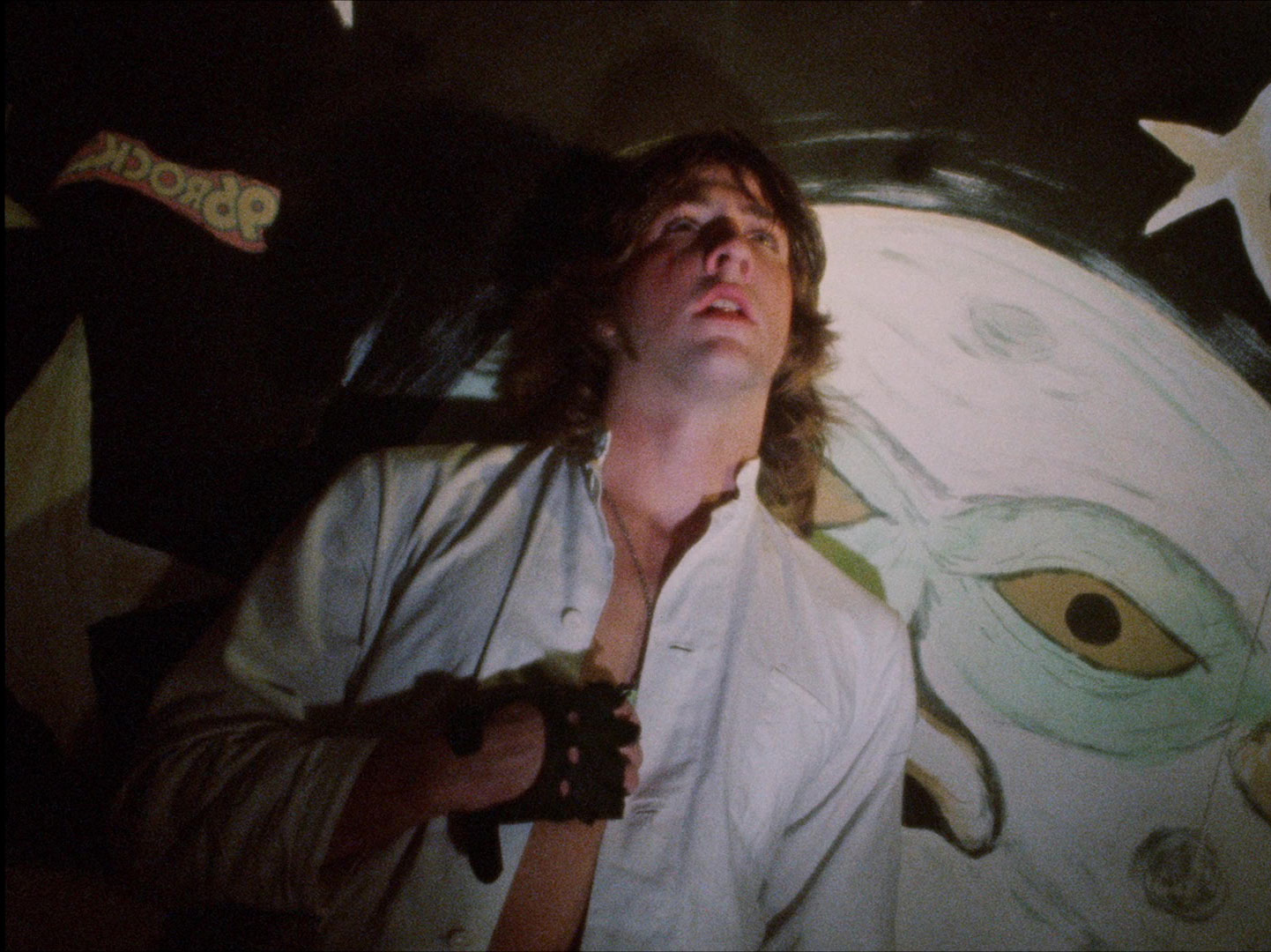 a visual style straddling somewhere between the crimson-drenched fever dreams of Kenneth Anger and the grimy color grading of a Harry Novak exploitation film, Deadbeat at Dawn deliberately assaults the viewer's senses and probably won't be an immediate sell for some viewers. However, when the action does kick 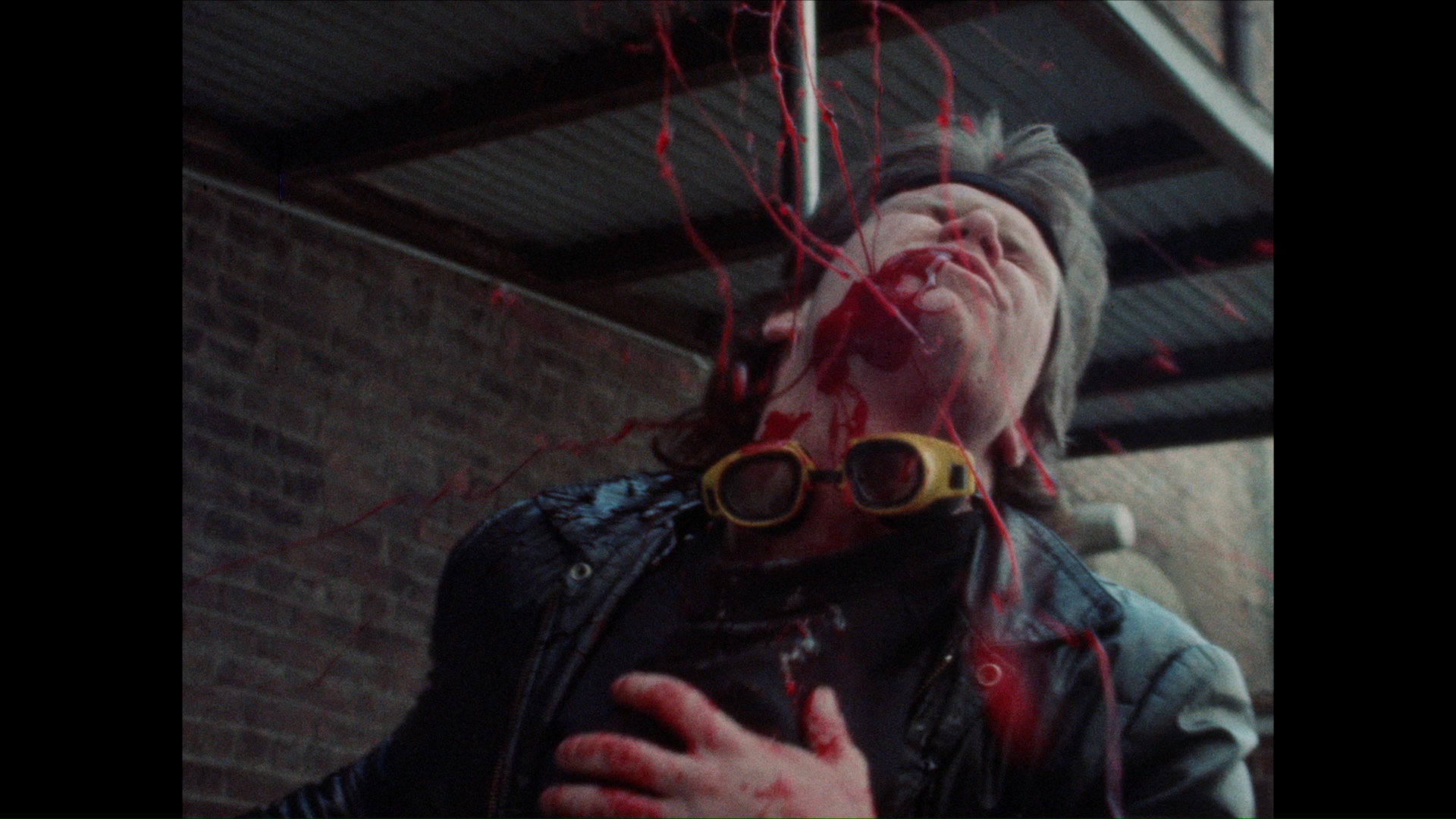 in VanBebber delivers a slew of amusing thrills built on dismemberment and spewing bodily fluids. Technically the fights themselves fall somewhat short of their Hong Kong and AIP models, with some clumsy tossed punches and missed kicks constantly assuring the viewer that it's only a movie. However, with this can't-miss combination of sex, action, gore, and black humor, the film's cult reputation is easy to understand.

Difficult to see for years on video outside of the bootleg circuit (and completely banned in Britain, not surprisingly), Deadbeat at Dawn first appeared on DVD in 1999 from Synapse with a laudable transfer at the time of this 16mm production, though its vintage and interlaced status made it dated rather quickly. VanBebber offers up a commentary track for the entire film (and, unadvertised, on several of its supplements), joined at various points by producer Michael King, actor Marc Pitman, and future Severin Films co-founder David Gregory, among others. "My Sweet Satan," a 20-minute short film from 1992, is actually a candidate for VanBebber's most purely effective achievement to date as an overall work, offering a harsh and unsettling portrayal of the Satanic youth panic that became a misguided American media hot topic for a few years. A very long VanBebber filmography lists everything from his first short home movie all the way up to his notorious unreleased epic, Charlie's Family, which for some reason features a release date of 1999 and eventually saw the light of day in 2003 as The Manson Family. Other bonuses include two 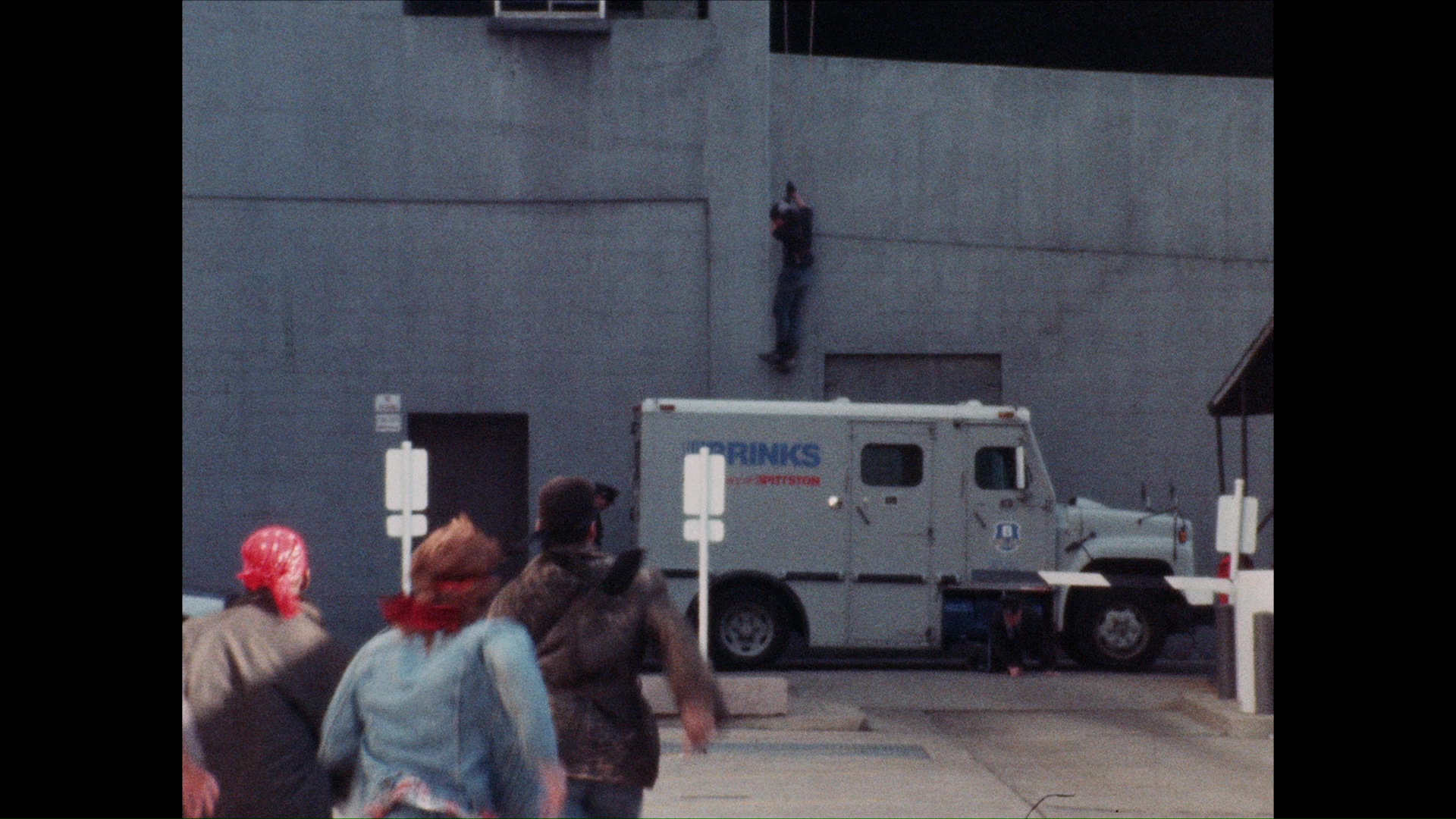 minutes of outtakes (mostly alternate camera angles of the fight scenes), the promotional trailer for Chunkblower (a never-completed 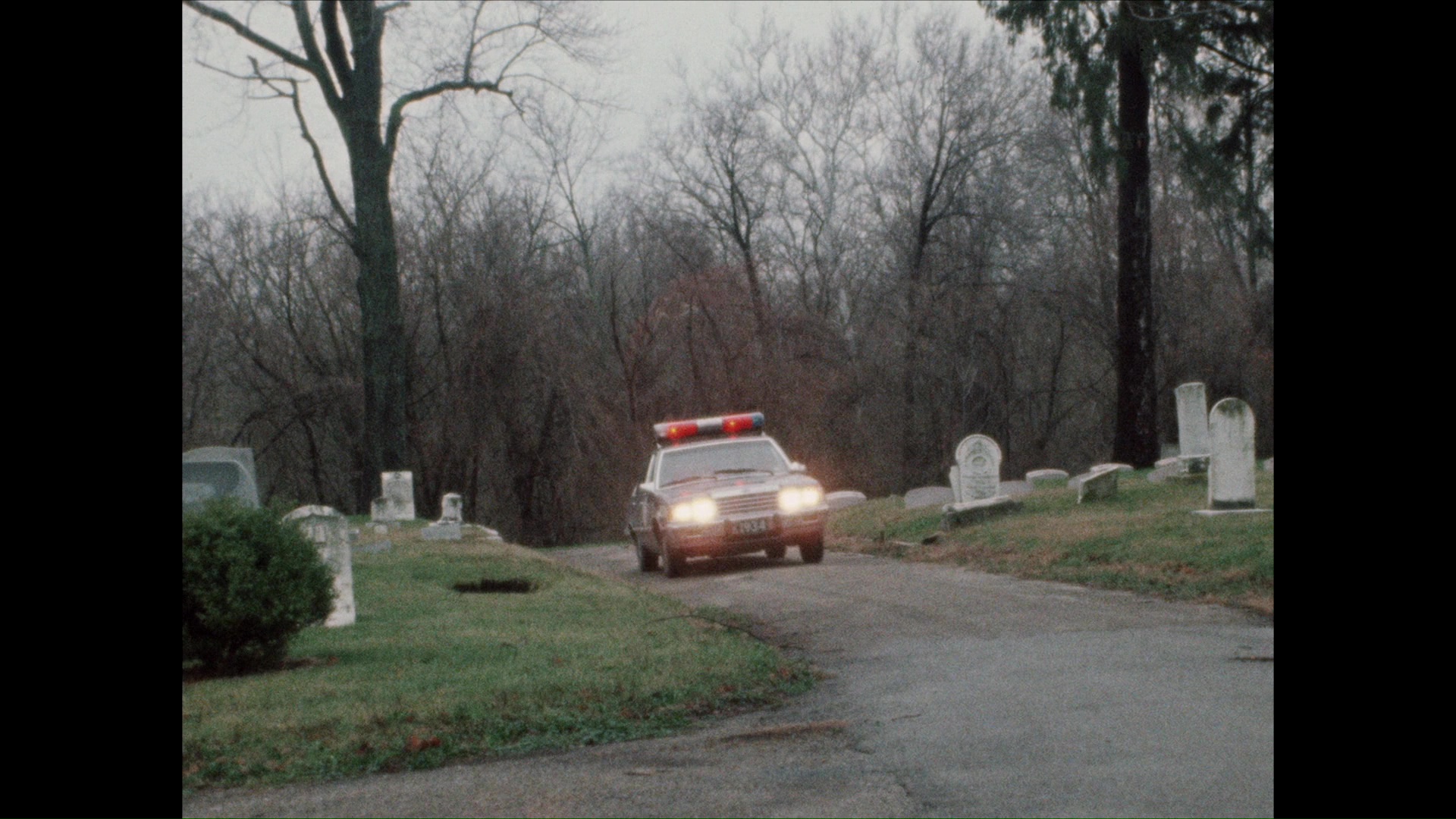 gore film by VanBebber), and a sample of the director's work for Skinny Puppy, the "Spasmolytic" video and an album commercial. Unfortunately, the unsettling "Road Kill: The Last Days of John Martin" (included on a previous VHS compilation of VanBebber's work) is noticeably absent due to legal reasons. In 2008, the film was issued as part of a Visions of Hell box from Dark Sky along with The Manson Family, including a new VanBebber interview and outtakes. Most significantly, that set includes a bonus disc with the short films "My Sweet Satan," "Doper," "Kata," "Into the Black," and "Roadkill."

In 2018, Arrow Video brought VanBebber's micro-budget epic back into circulation with its Blu-ray debut featuring a pretty miraculous transfer that makes the film a far more impressive viewing experience than ever before; detail is upgraded considerably and the finely rendered film grain is nicely textured with plenty of depth. Most importantly, the color palette is much stronger here with some of the most intense, hellish reds you'll ever see. The LPCM 1.0 mono audio is also more dynamic and no longer sounds like it was captured on a hand-held tape recorder. A brand new audio commentary with VanBebber finds him joined by actor Paul Harper, Cody Lee Hardin, and filmmaker Victor Bonacore (who helmed the solid documentary, Diary of a Deadbeat: The Story of Jim VanBebber). They're all in great spirits here and have lots of fun revisiting the film (the packaging calls the track "freewheeling," as good a description as any) with little nuggets along the way about cinematic inspirations ranging from Charly to Billy Jack. 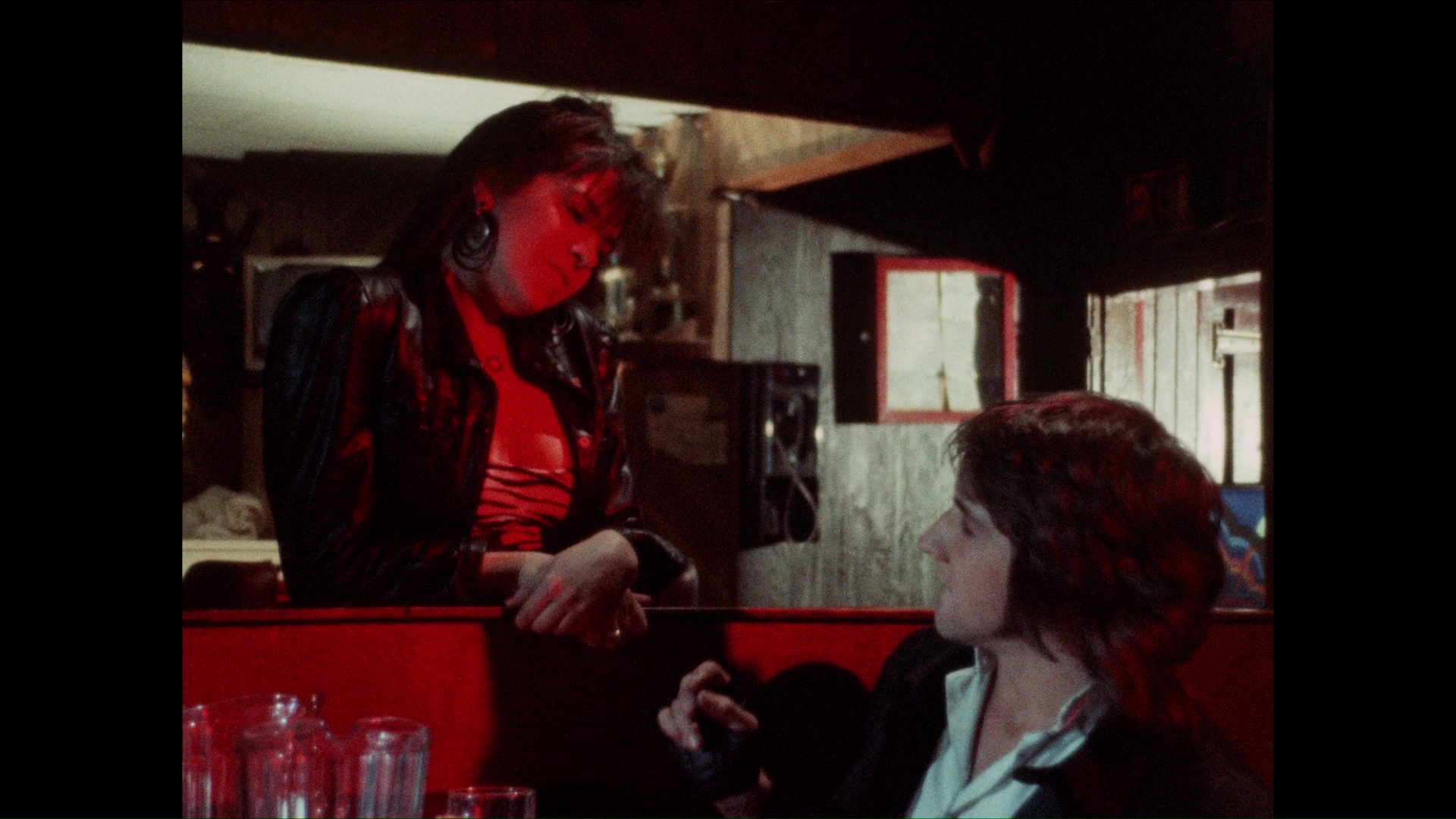 Video extras-wise the disc also breaks new ground starting off with the feature-length "Deadbeat Forever" (79m36s), directed by Bonacore of course, with plenty of additional friends and colleagues interspersed with a treasure trove of photos, clips, and new VanBebber interview footage charting his course from early shorts shown outside a Catholic school(!) to his take no prisoners approach to indie filmmaking as we now know it. 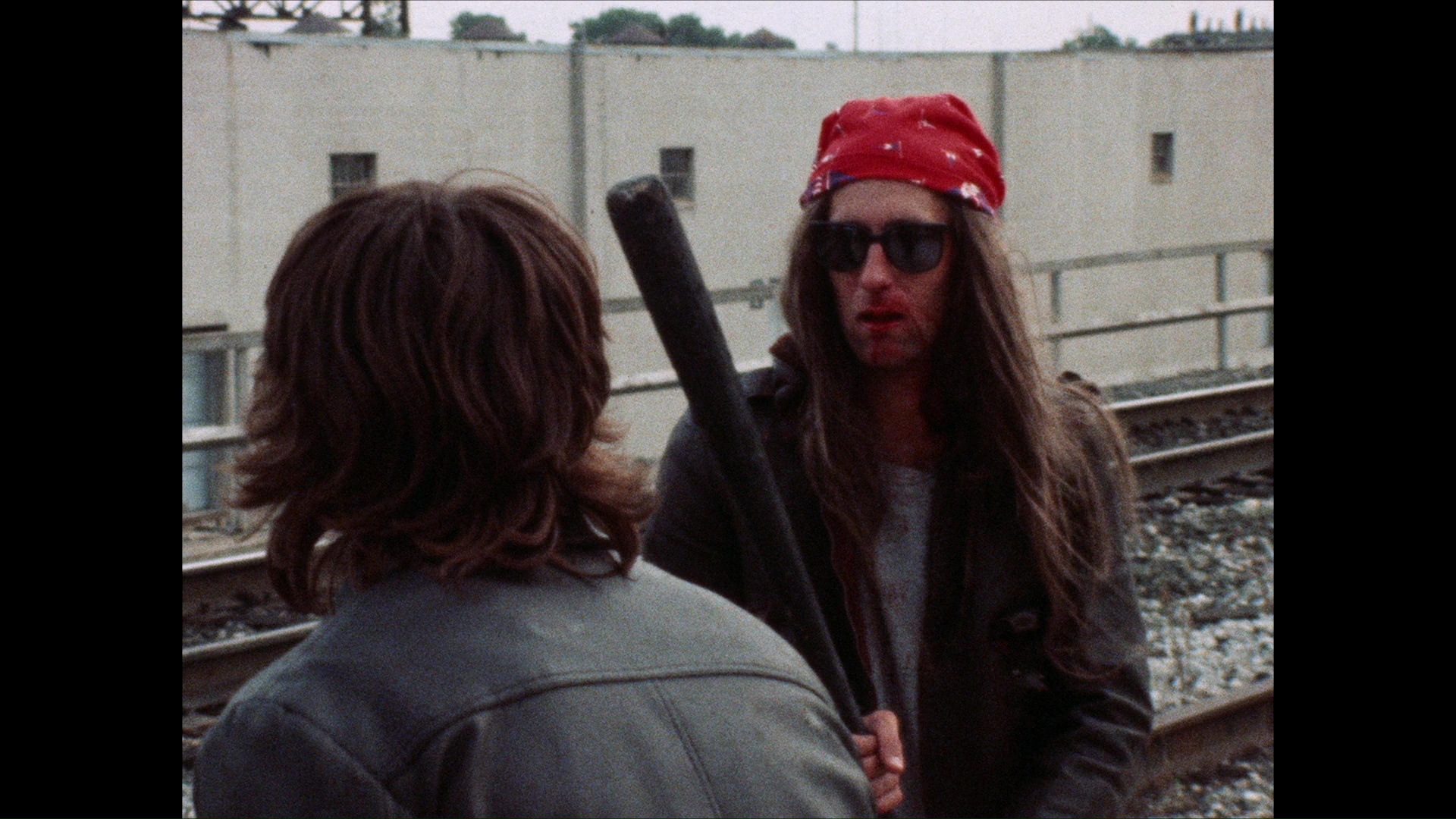 The ending includes his promise to make Day of the Deadbeat, so maybe we'll see an updated version of this doc in the future. A rough quality 1989 making-of doc (18m41s) is presented in all its raw, dupey glory showing some less than seamless action coordination during an afternoon shoot, while the outtakes reel (2m59s) is presented in a much-improved new HD scan. Four of VanBebber's previously available shorts are showcased in rock-solid new HD transfers: "Into the Black (1983, 34m42s), My Sweet Satan (1993, 19m3s), "Roadkill: The Last Days of John Martin" (1994, 14m17s), and "Gator Green" (2013, 15m48s), his Kickstarter-funded short previously seen on the Blu-ray of The Manson Family; all come with optional VanBebber and company commentaries as well. A quartet of VanBebber-directed music videos is highlighted by a never-before-seen director's cut of Pantera's "Revolution Is My Name" (including some brief but choice horror movie clips), Damien Storm's "The Legend of Damien Storm," and Superjoint's "Fuck Your Enemy" and "The Alcoholik." The 4-minute Chunkblower promotional trailer is included as well (with optional commentary), followed by no less than six image galleries dedicated to the main feature's behind the scenes (187 images!), ephemera, "My Sweet Satan," "Roadkill" and its concept art, and "Gator Green" (330 images!). The reversible sleeve features new artwork by Peter Strain, while the first pressing's insert booklet contains new liner notes by Scott Gabbey and Graham Rae. 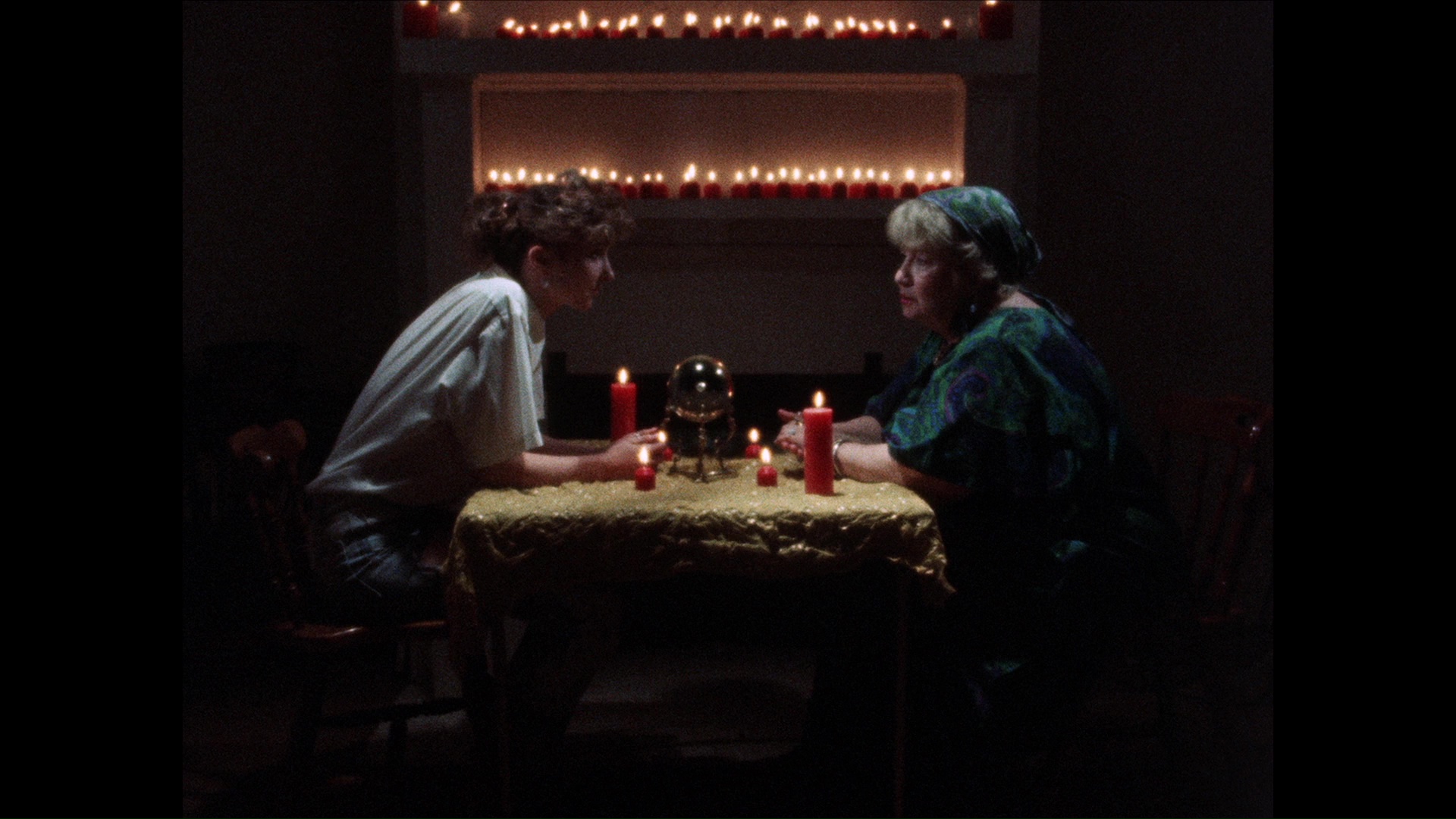 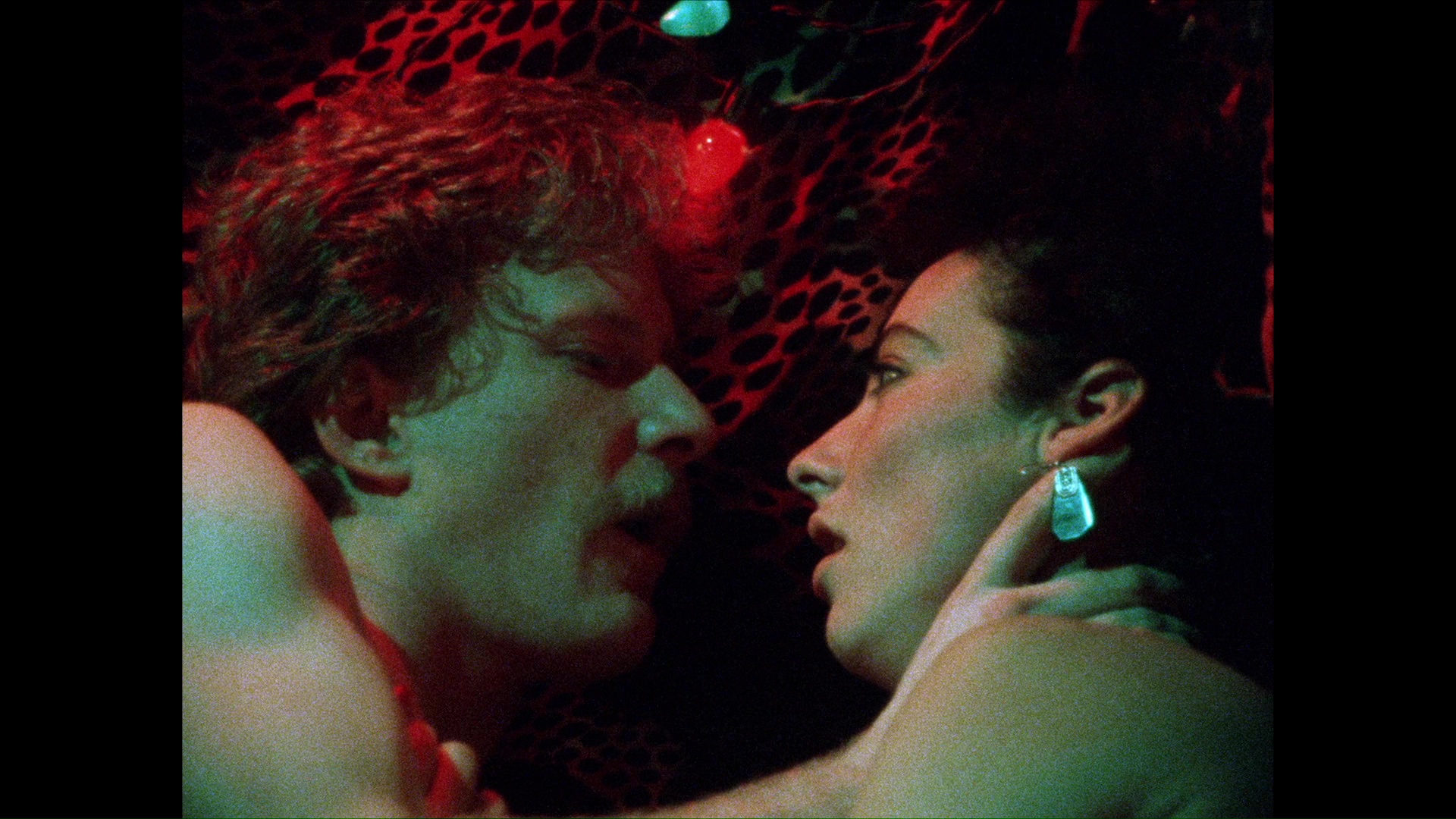 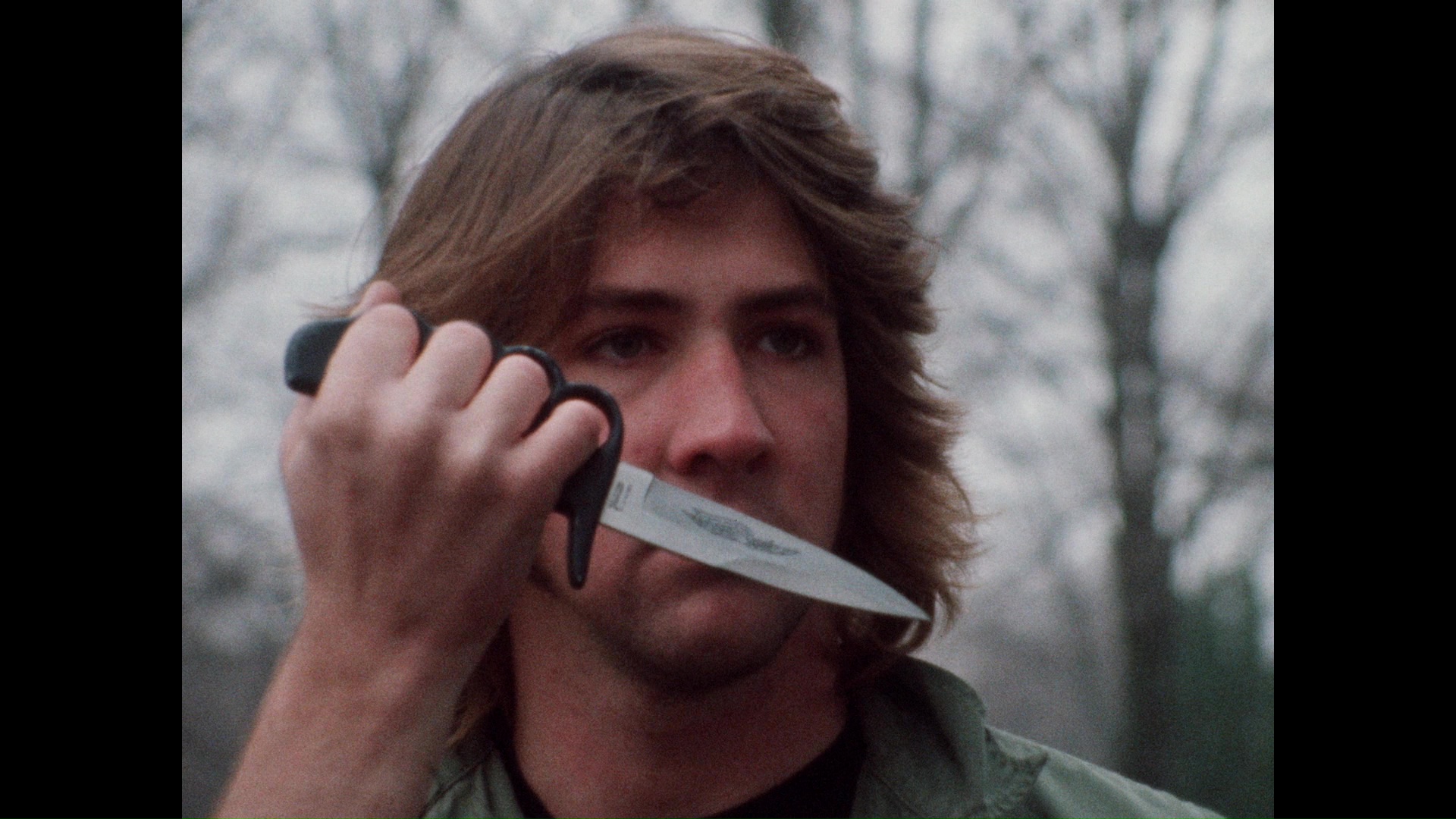 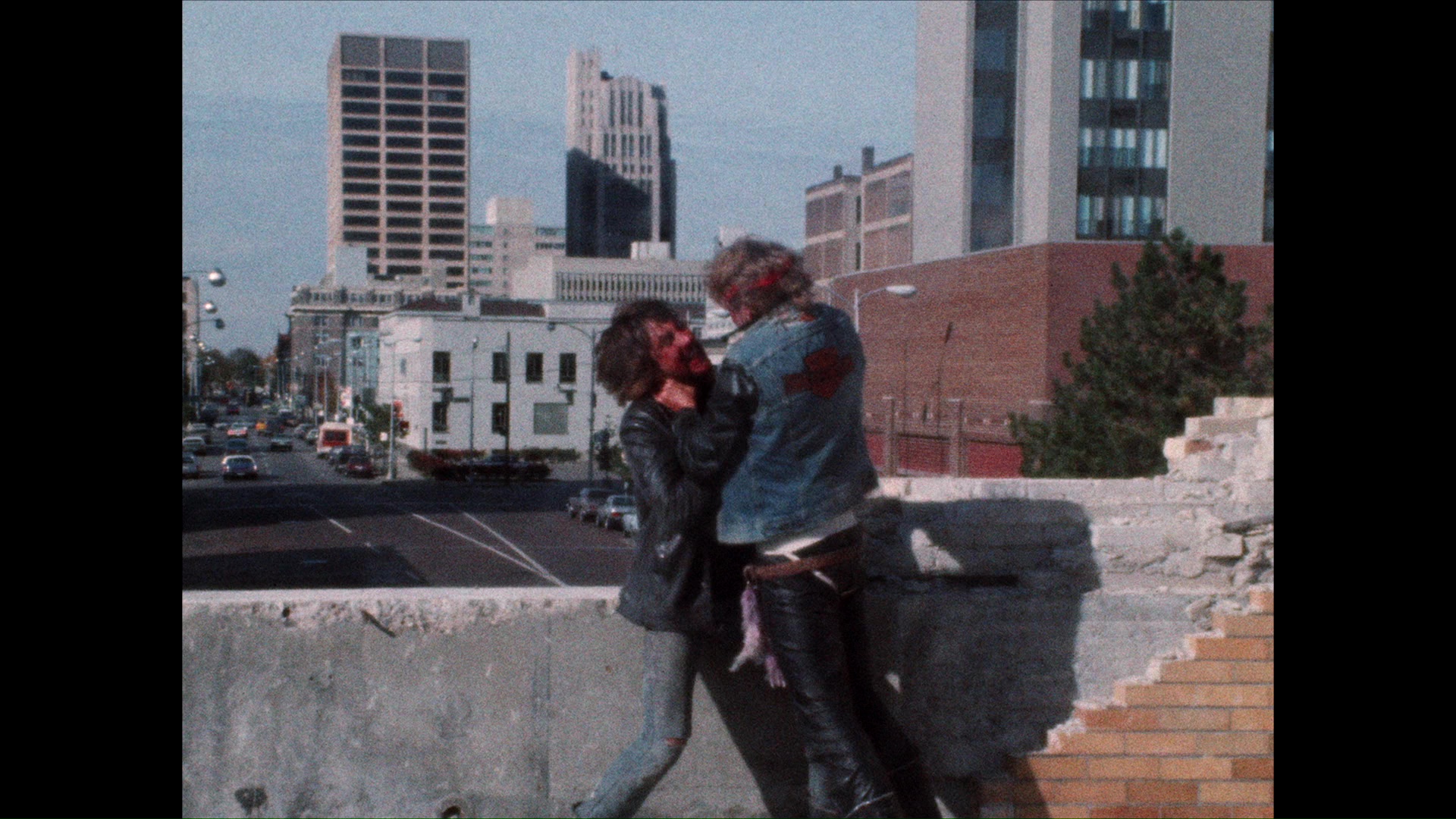 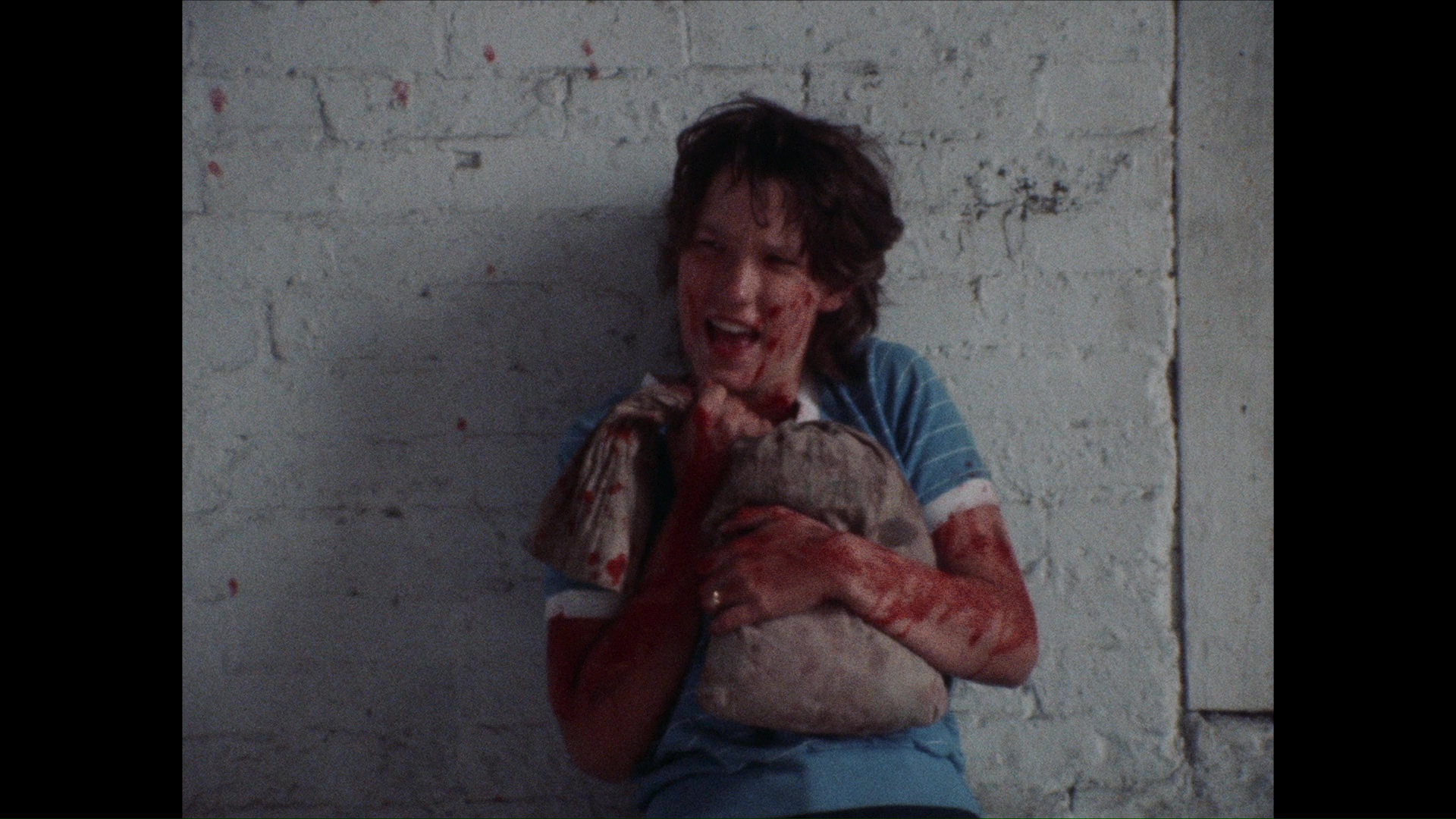 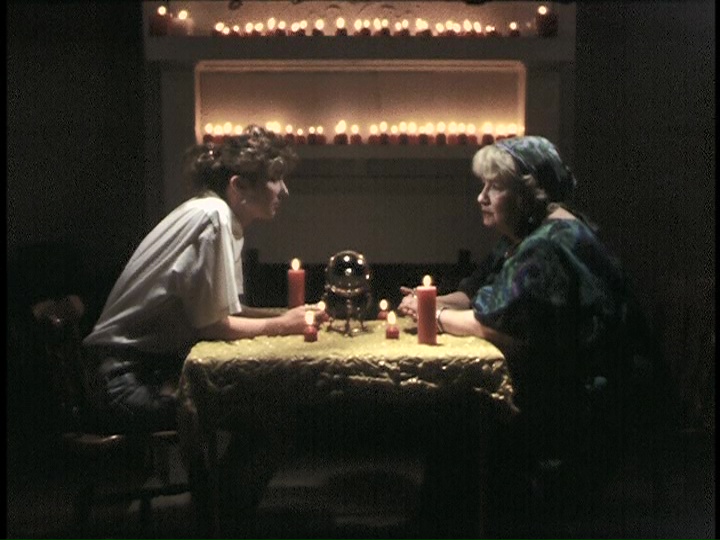 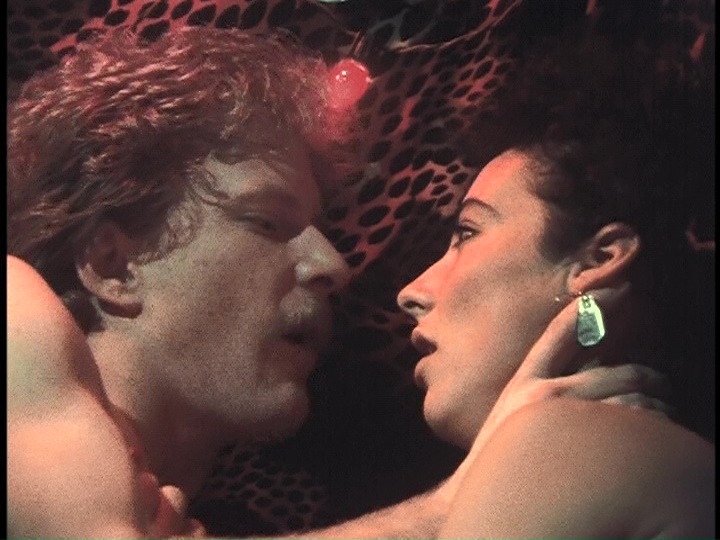 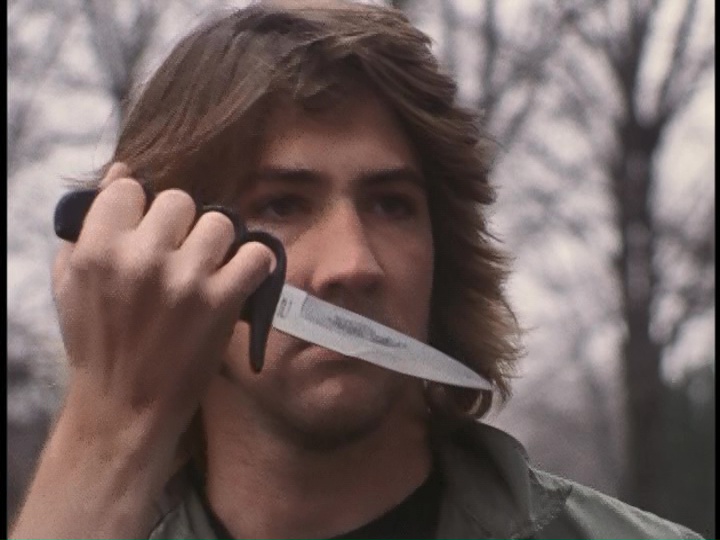 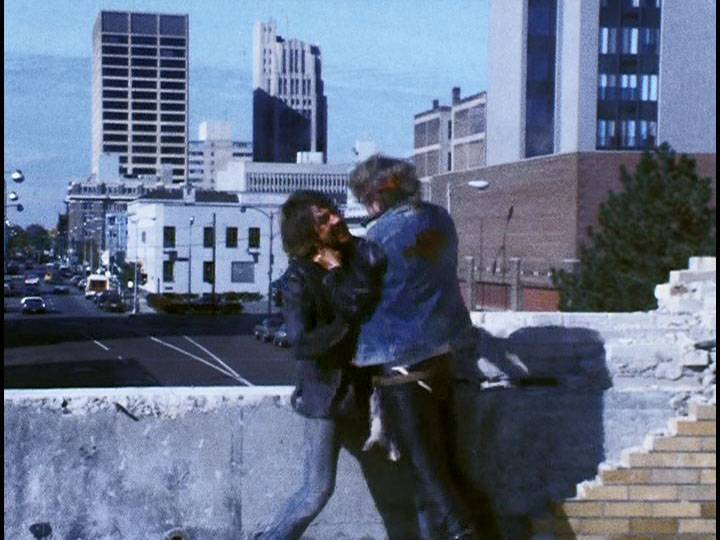 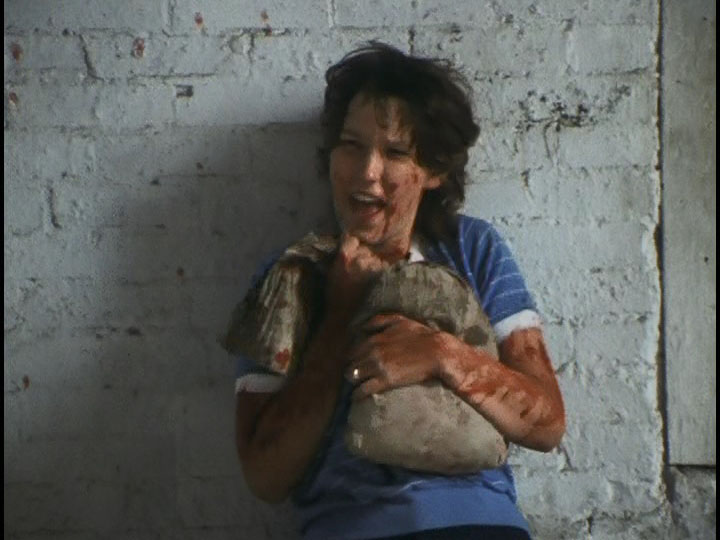