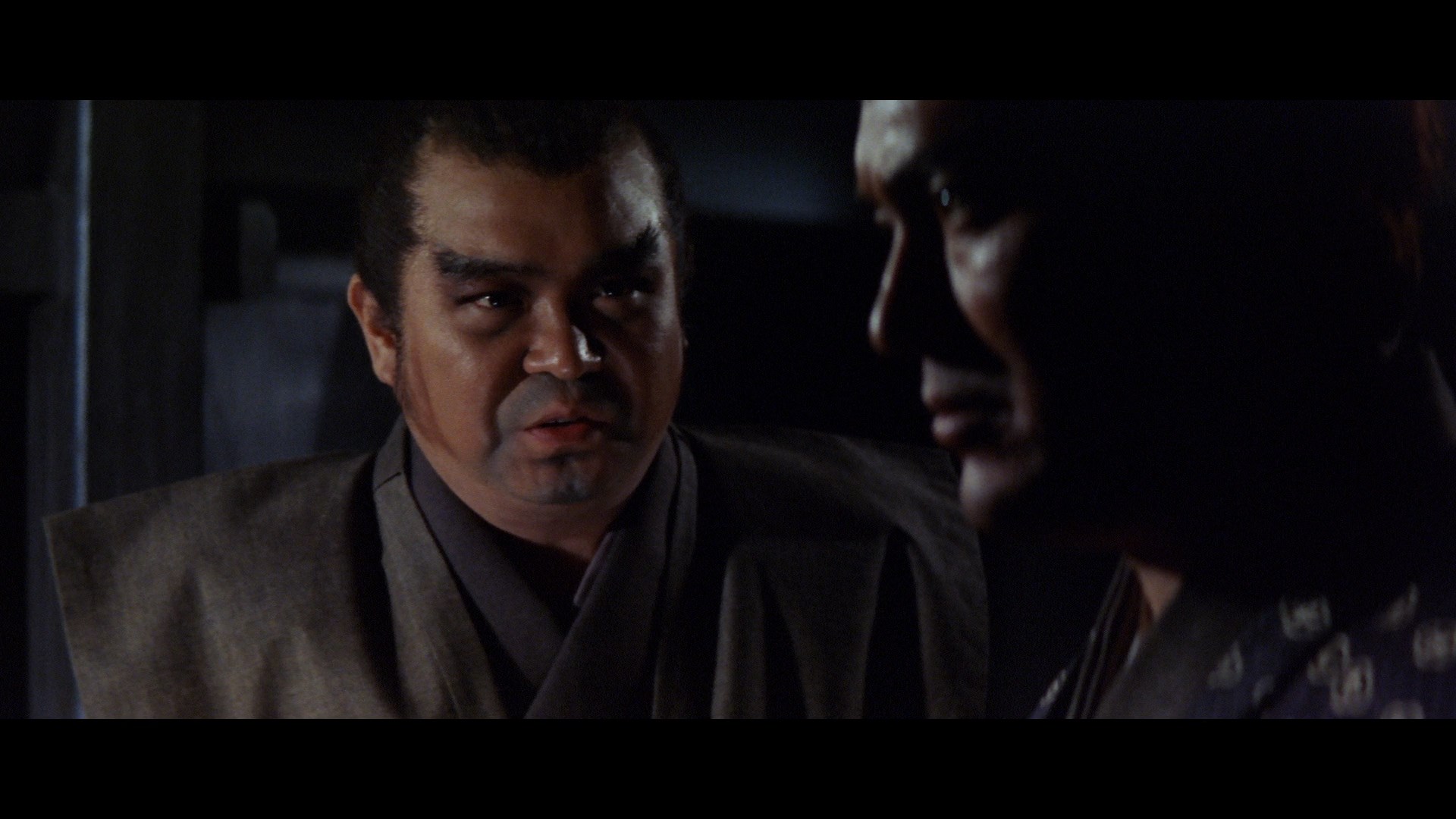 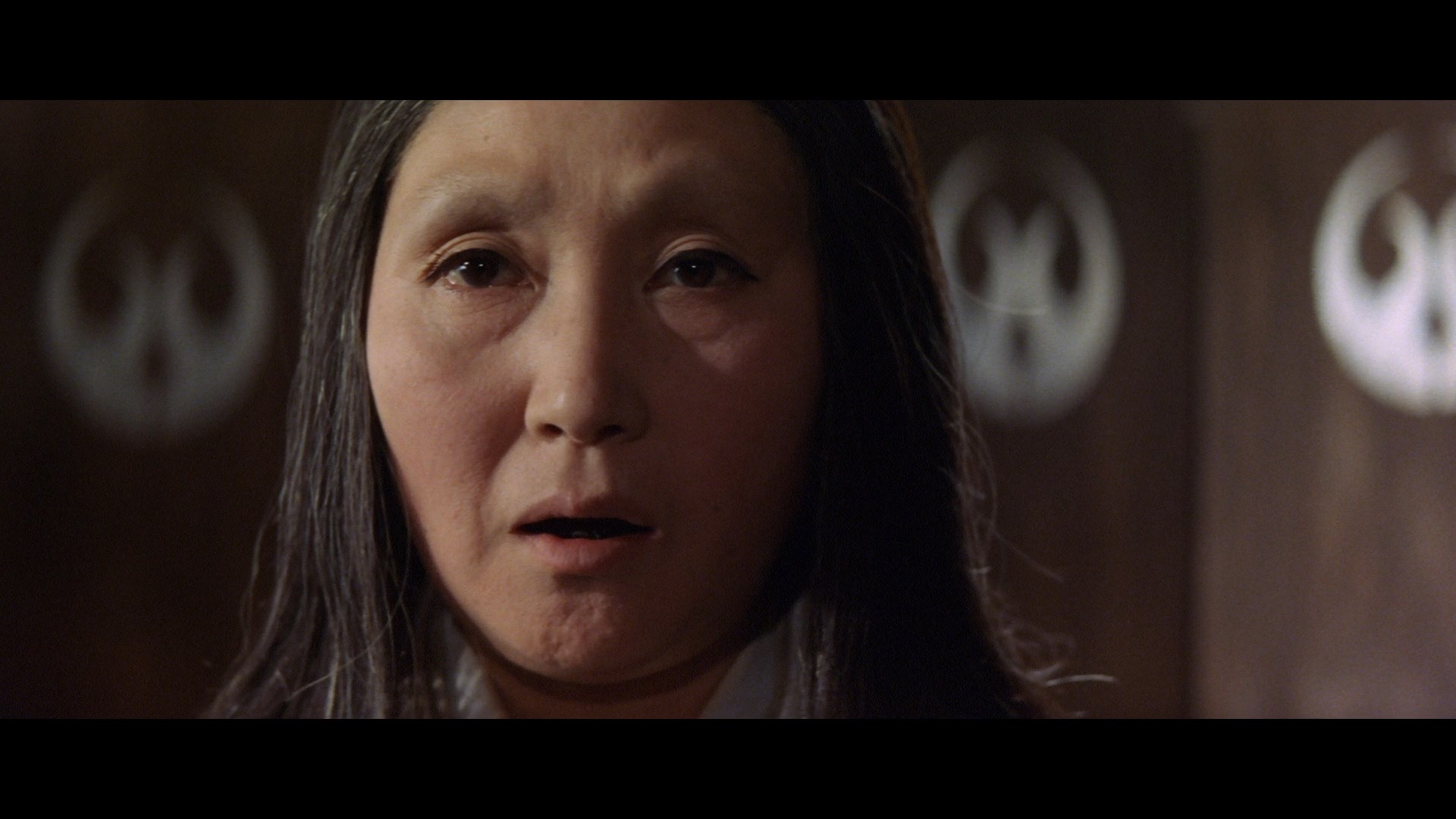 global exposure from the art house to monster movie matinees, each studio was busy churning out dozens of films each year to meet the demand. One of the most prolific of these was Daiei Film, which found success with its Gamera and Zatoichi series along with shorter and more outlandish curios like the Yokai Monsters films. Though initially treated as disposable giant monster fodder in the U.S., the three Daimajin films produced in 1966 have become one of its best-loved genre contributions, with each production offering a standalone story and different director while retaining some valuable crew members like composer Akira Ifukube of Godzilla series fame and cinematographer Fujio Morita, the latter working in scope and very saturated, stylized color.

The first film, simply titled Daimajin but released in English under a variety of other titles like its direct-to-TV U.S. fate as Majin the Monster of Terror, takes place in a Japanese village where local mythology claims a large mountain is home to a long-dormant supernatural giant, Arakatsuma, the name given to the towering Daimajin stone god. A violent coup led by the ruthless Samanosuke (Gomi) 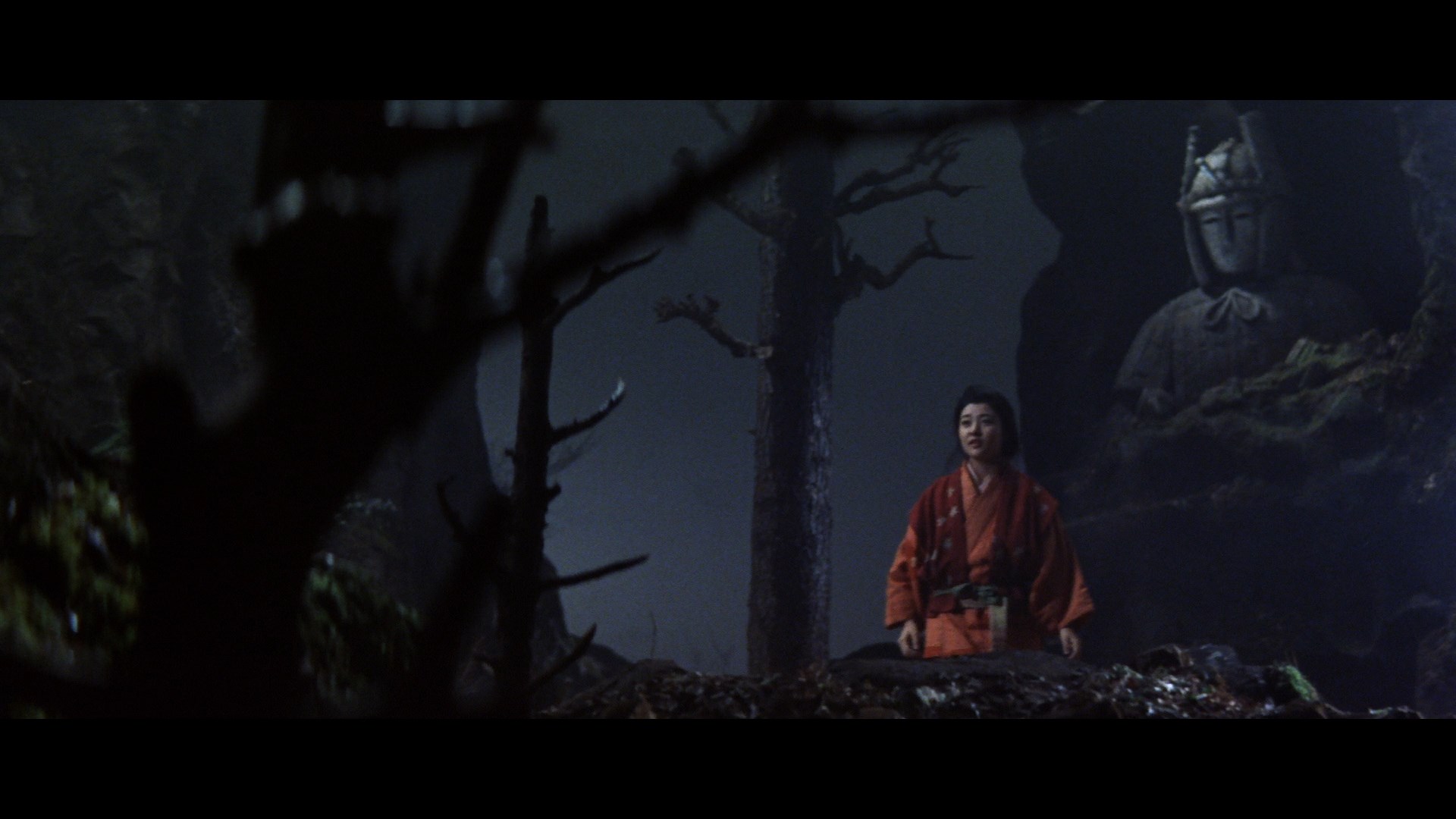 forbids the regular ceremonies intended to keep the being at bay in his natural home, while the 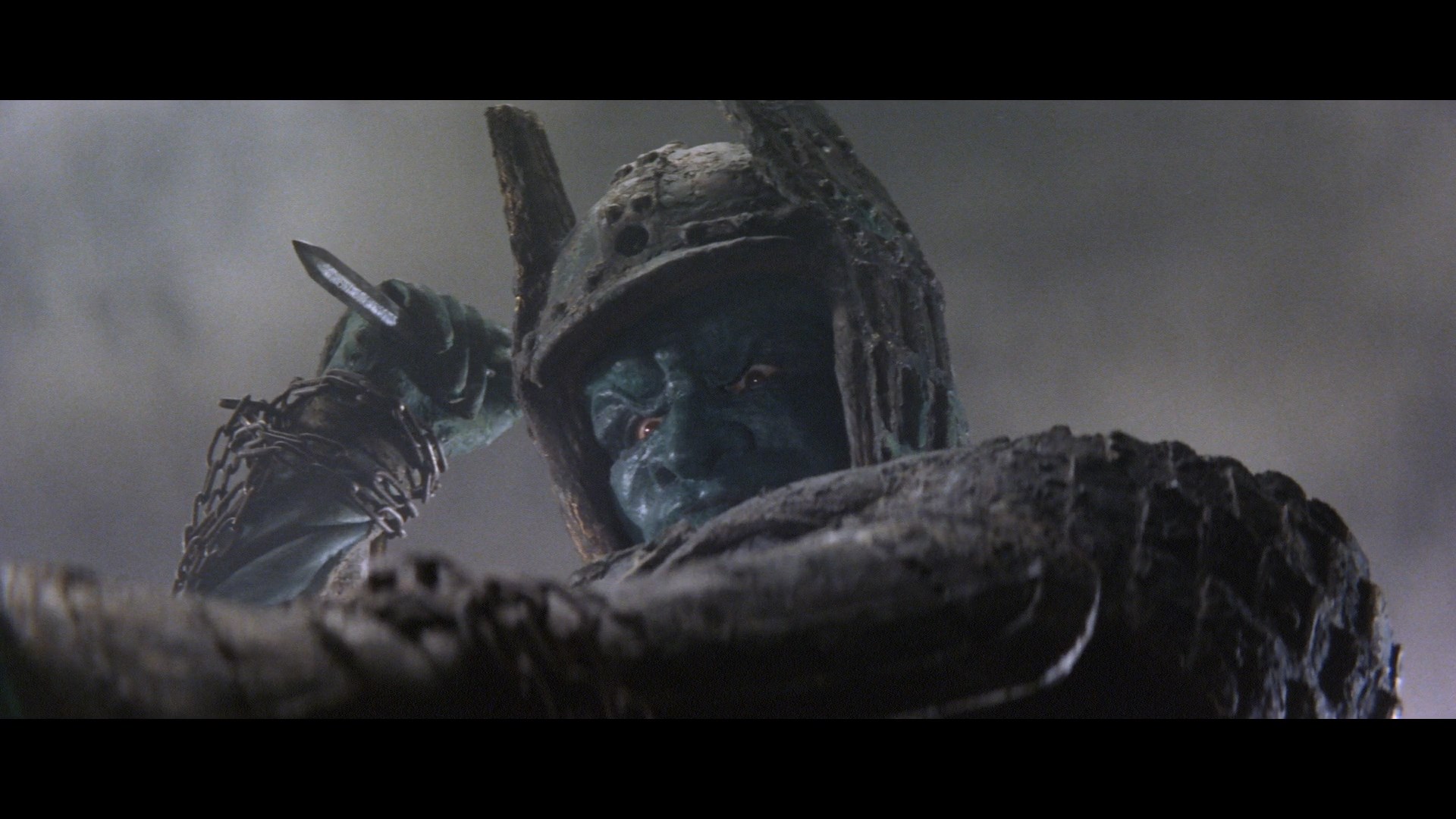 two children of the village's slain leader are spirited away to a remote temple where they grow up to adulthood as Tadafumi (Aoyama) and Kozasa (Takada). As the land falls under increasingly brutal tyranny, the siblings and the townspeople become more desperate for their slighted guardian to step in and take action -- though the price could be more destructive than they're willing to pay.

Taking a page from classic sci-fi and horror films by keeping its central monster off stage until the climax, Daimajin aims for a more respectable audience than what was becoming the usual matinee audience fare thanks to its opulent period detail and feudal Japan setting nicely handled by frequent Zatoichi helmer Kimiyoshi Yasuda. Of course, it ultimately amounts to a special effects showcase during the final stretch when the titular being comes to life, achieved with a variety of inventive tricks involving green screens, crafty model work, a Daimajin suit, and forced perspective. Unfortunately Japanese cinema was going through a downswing by the time the films started coming out, with oversaturation in the international market starting to take its 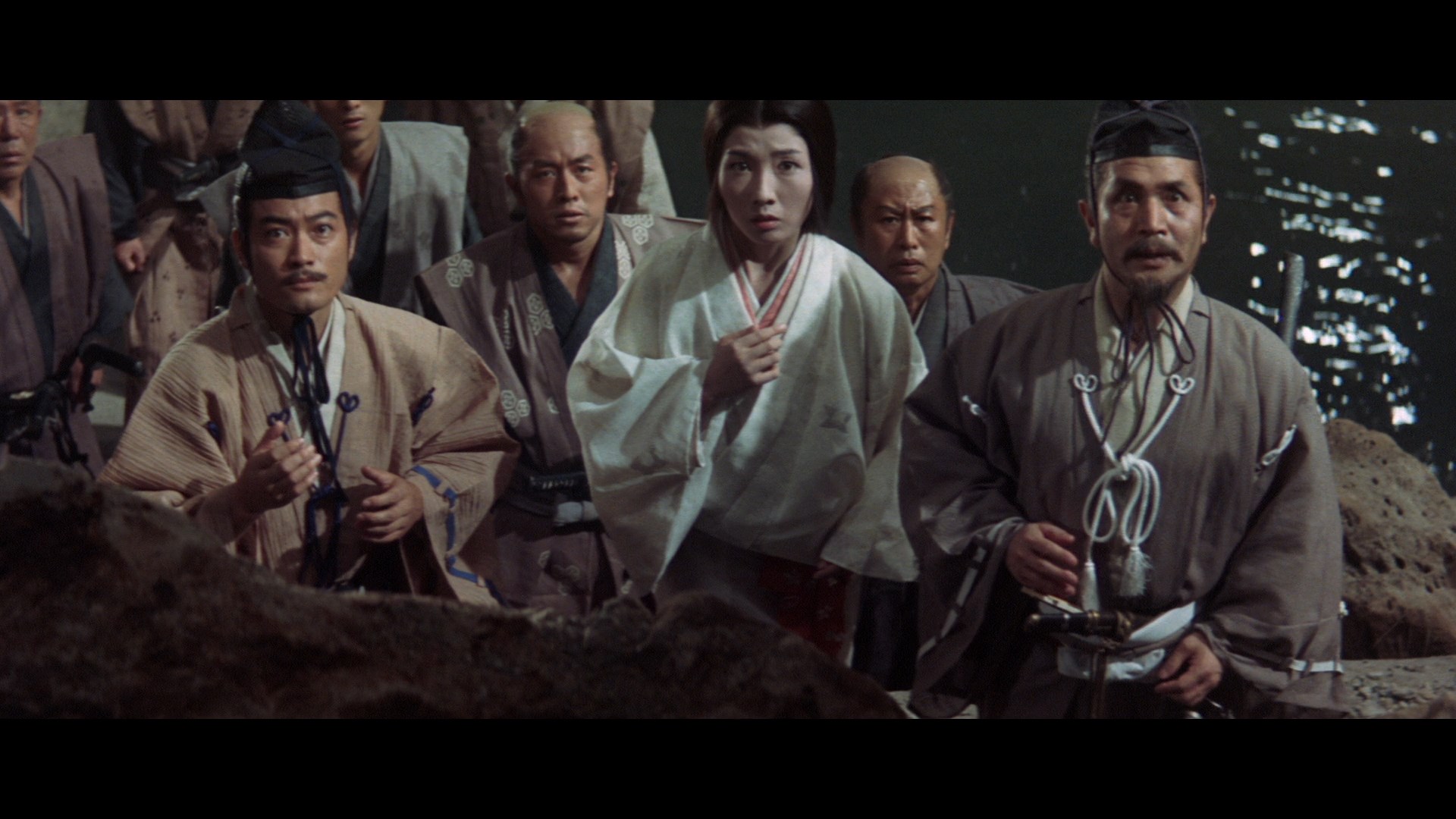 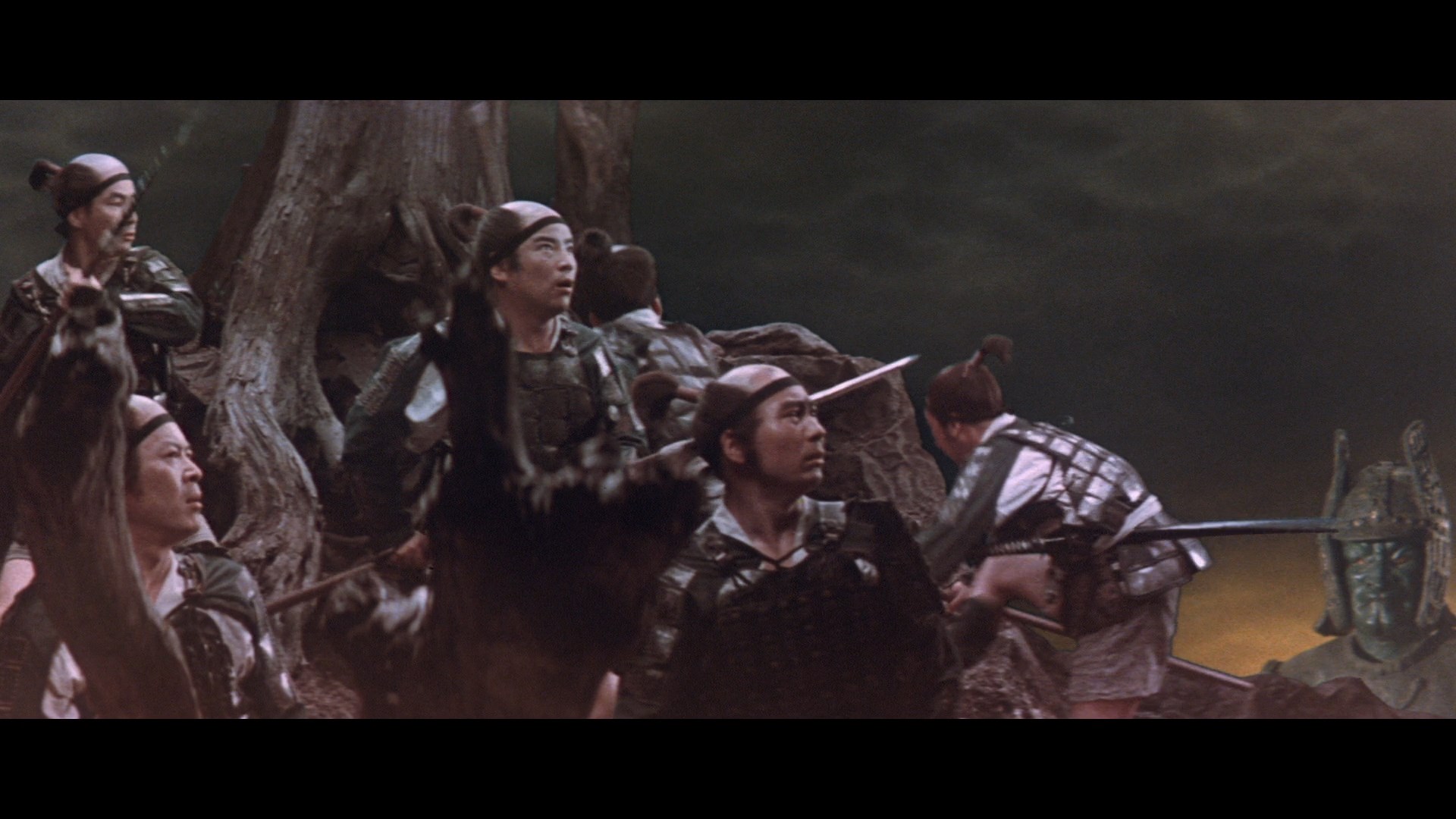 well after the fact. Ultimately it was a gamble that didn't quite pay off when Daiei leaped straight into the second film, The Return of Daimajin, which essentially riffs on the same formula of an evil lord inflicting suffering on the common people who rely on their idol to come to their rescue. This time Lone Wolf and Cub director Kenji Misumi (who also helmed the Sleepy Eyes of Death films and the wild Hanzo the Razor: Sword of Justice) takes over for the story of another corrupt and power-mad lord who drives a steady stream of the populace into two neighborhood villages for help. Determined to crack down on the refugees, he interrupts another Daimajin ceremony and decides he'll not only inflict harm on the villagers but wreck that statue as well. Of course, that turns out to be a supremely bad idea. Essentially a replay of the first film but with a bigger cast of ostracized protagonists, this is paced almost identically with lots of persecution leading up to the inevitable payback and a frantic decision about what to do with that gigantic stone god once he's served his purpose. It's nicely handled though with even more ambitious special effects at the end, making it a fine if somewhat familiar follow-up.

Released at the tail end of the very same year just in time for the winter holidays, Wrath of 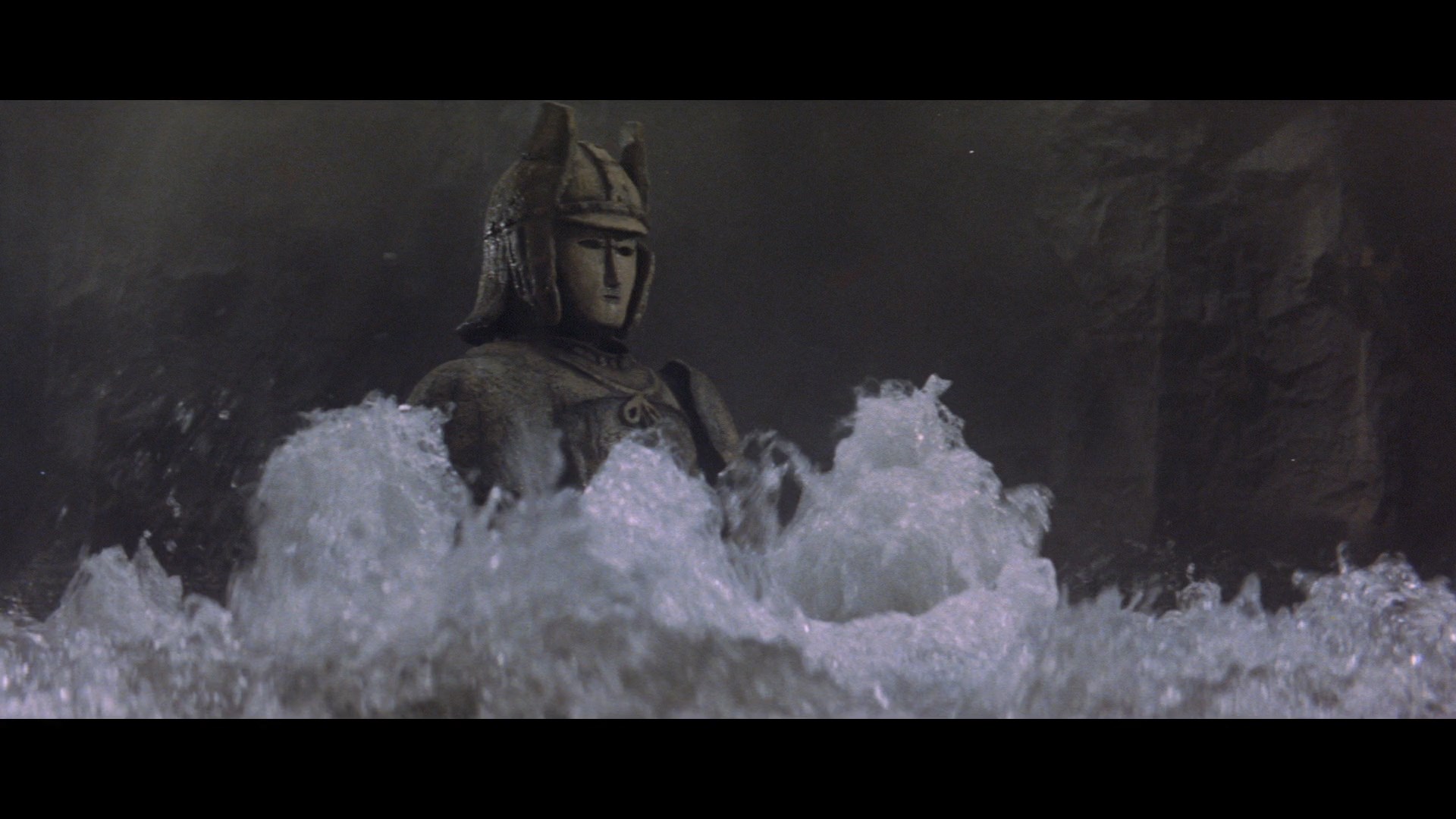 obviously amps up the kiddie factor to go for the same audience as the Gamera films at the time. The gambit didn't work and the film barely got any theatrical play in Japan, not even getting top-tier double feature play with other Daiei films and effectively closing the door on the official trilogy. Here that pivotal statue is transported to a remote, snow-covered mountain along a path where another tyrant, Lord Arakawa (Blind Woman's Curse's Abe), keeps swiping helpless adult male villagers to become forced laborers. Four of the abductees' children decide to make a perilous winter trek to help them and encounter the Daimajin, who of course appreciates their respectful treatment of him and is less appreciative of the exploitation going on nearby. This one shakes things up a bit (apart from the kid emphasis) by giving us the usual monster stomping at the end shading with heavy snow flurries, a nice change from the usual bright afternoon sun and billowing dust that defined the previous two films. Unlike the prior two films, this one didn't even go to American TV and remains less seen and discussed overall, but again it's quite entertaining and visually lavish with a climax that certainly delivers.

Barely seen in English-friendly versions for years after their TV runs, the Daimajin cycle has been treated for more respectfully in the modern digital era including letterboxed and subtitled DVD releases that fared much better than the dubbed, cropped messes we had before. (A poor and highly questionable DVD double feature of the first two films was issued from Retromedia reflecting the AIP TV versions from lackluster 16mm prints as The Giant Majin Collection; skip it.) In 2011 after a Japanese-only Blu-ray set just before it, sort-of budget label Mill Creek bowed the three films on Blu-ray in English-friendly editions (both subbed and dubbed) with their respective trailers and a trio of behind-the-scenes featurettes (28m13s, 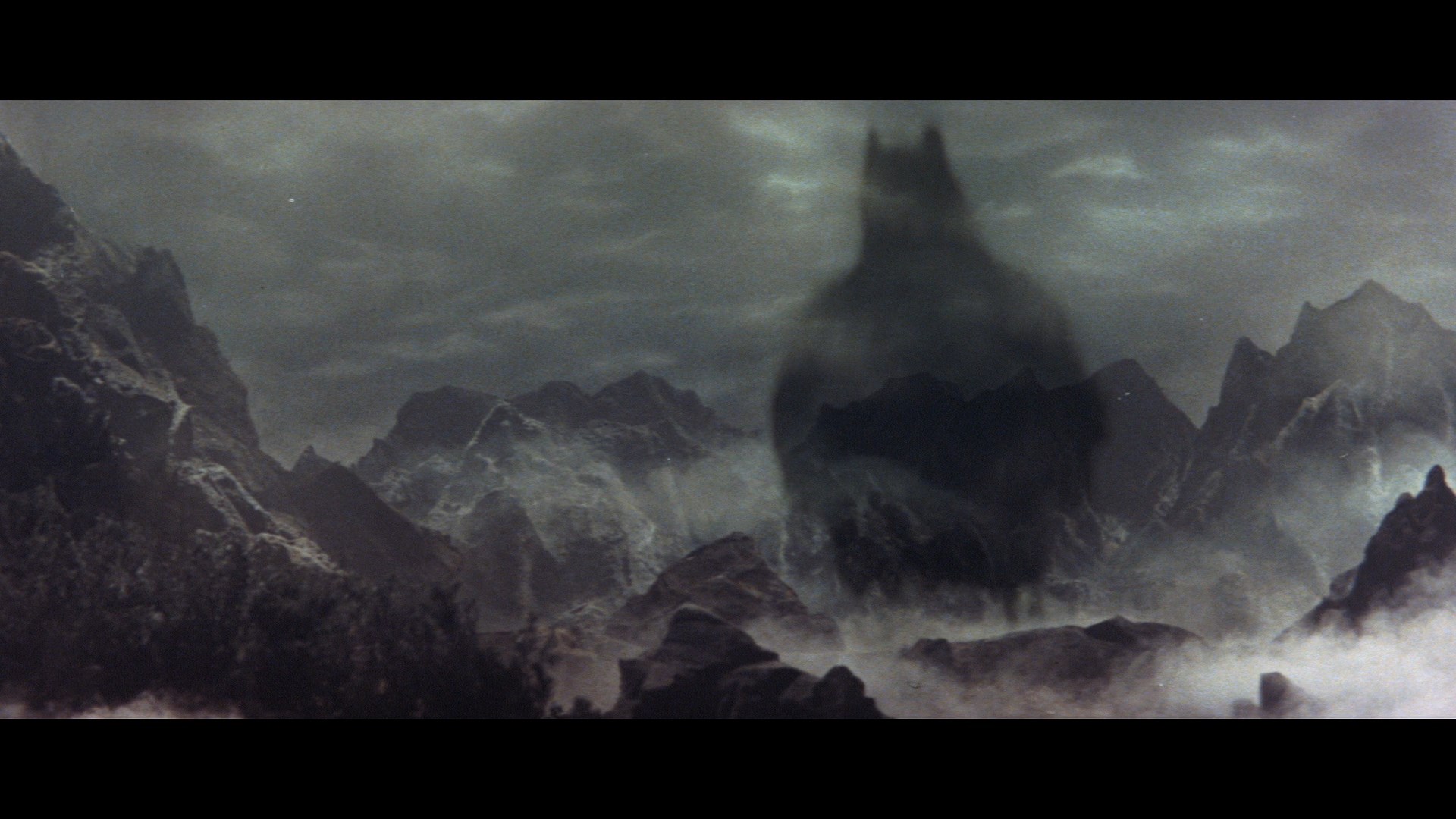 31m4s, and 28m21s) with Morita created for the Japanese home video releases. In 2021, Arrow Video gave the films a big 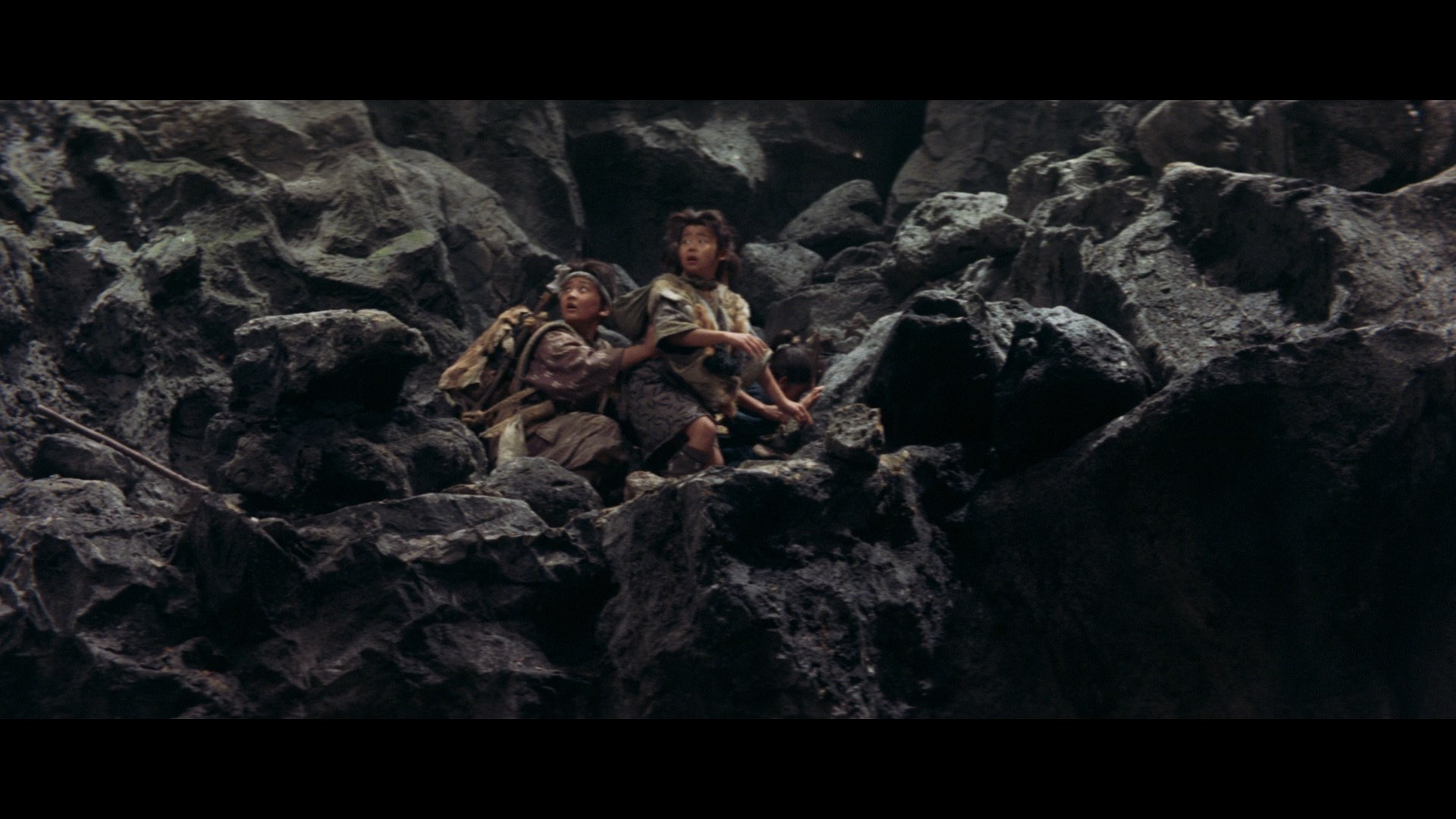 upgrade with a limited edition Blu-ray set in the U.S. and U.K., complete with the usual opulent packaging including a 100-page illustrated book featuring new essays by Jonathan Clements, Keith Aiken, Ed Godziszewski, Raffael Coronelli, Erik Homenick, Robin Gatto and Kevin Derendorf, plus poster-replica postcards. This also marks the first official home video release of any kind for these films in the U.K., where you were pretty much out of luck prior to this unless you felt like paying some steep import costs. The transfers on the old Mill Creek set were nice but compromised by low bit rates and some iffy compression; it's nice to see the films looking better here a decade later with each film given its own superior authoring on its own disc, with DTS-HD MA original Japanese and English dubs with optional English subtitles. They all look and sound very good, about on par with Arrow's other Daiei titles. Each film also comes with a new audio commentary: Stuart Galbraith IV on Daimajin (focusing on the films' relevance to Japanese fantastic cinema and the cultural factors involved as well as some insightful looks at related narratives like the Golem folklore and its cinematic interpretations); Tom Mes and Jasper Sharp on Return, starting off explaining how they discovered the series and focusing heavily on the studio's history and the larger connections to Japanese cinema at large; and Jonathan Clements on Wrath, charting the quick disappearance of the series, the seasonal changes from one film to the next intended to time with their theatrical releases, the variations on the mythology here, and the obvious ties to the progression of the Gamera series. Each track doesn't really overlap much at all, and they're all fine listening with a unique perspective.

As for video extras, Daimajin features a new video introduction (actually an interview, but hey, semantics) with the always 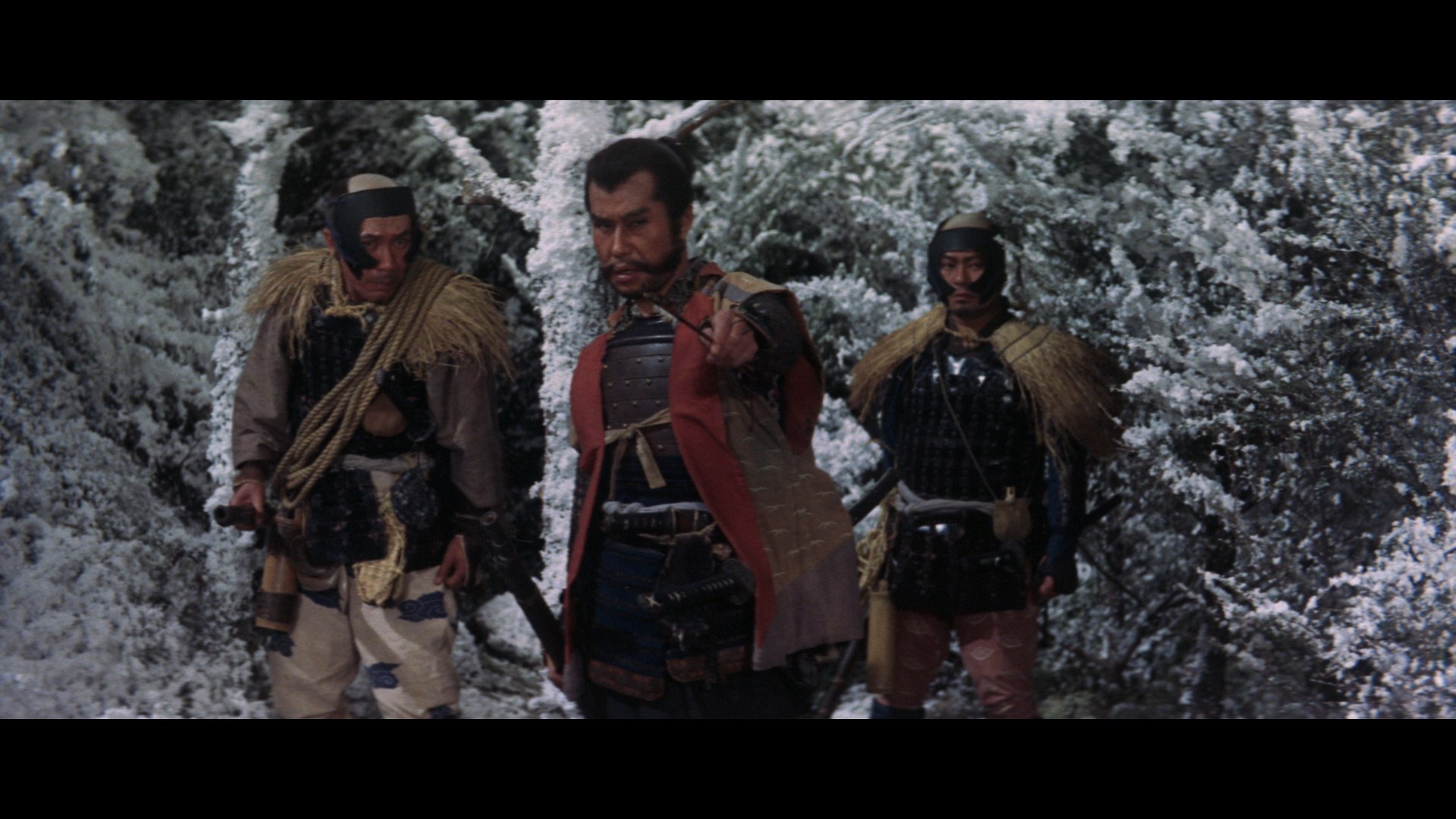 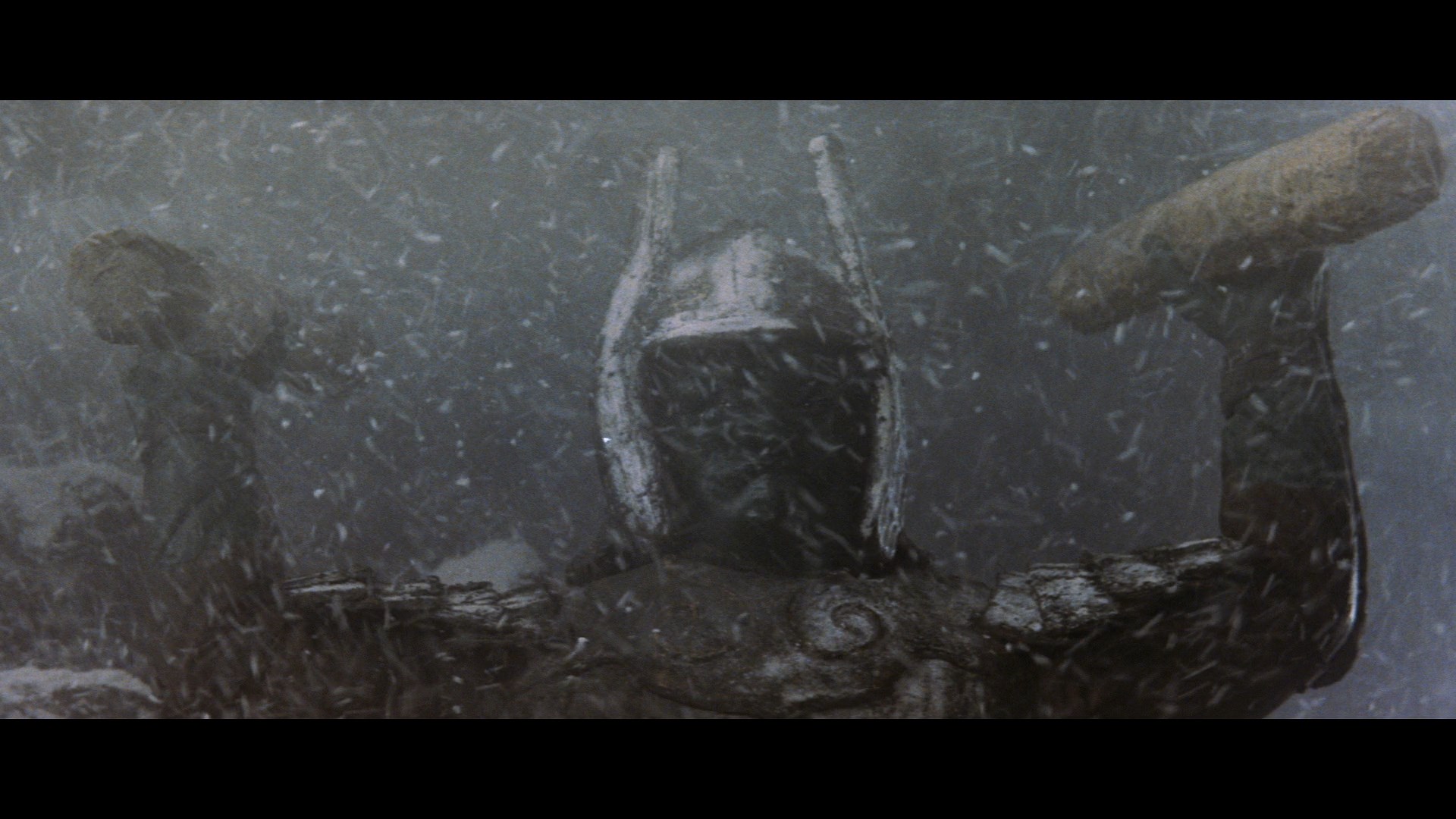 variation on "an hour and a bit of oppression, and then a monster rampage at the end" while using the more methodical pacing to focus on conveying the scale of the special effects more carefully than usual when they erupt. In the video essay "Bringing the Avenging God to Life" (17m11s), Ed Godziszewski offers a very engaging overview of the creation of the monster under the guidance of veteran Yoshiyuki Kuroda with a team hard at work pulling off some tricky illusions and contending with elements on set like potato dust. Also included are the U.S. Majin credits (in both 2.35:1 and 1.33:1 presentations), Japanese trailers (standalone and paired up with Gamera vs. Barugon), two U.S. TV spots, and a 48-image gallery. Return features "My Summer Holidays with Daimajin" (33m45s), a new video interview with Professor Yoneo Ota, director of the Toy Film Museum, Kyoto Film Art Culture Research Institute, which starts with a quick survey of his work (including the salvaging of Japanese silent cinema scraps) and launches into a colorful history of Daiei and these films' placement in its history. "From Storyboard to Screen: Bringing Return of Daimajin to Life" (3m54s) is a comparison of several key scenes, with 8 storyboards also included separately. You also get the U.S. credits in both aspect ratios again, the Japanese trailer, a U.S. TV spot, and a 31-image gallery. Finally Wrath has an interview with Morita (87m29s), which is actually a stitching together of the great three-part featurettes seen earlier on the Mill Creek set-- here swapping out English-language text cards for the hard-to-read subtitled Japanese ones we saw before. Also included are the Japanese trailer and teaser, plus a 20-image gallery.