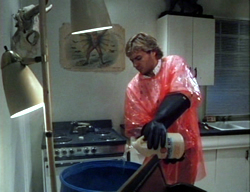 T he apprehending of notorious serial killer Jeffrey Dahmer in Milwaukee in 1991 caused one of the decade's biggest media circuses, complete with enough sordid elements to fuel dozens of true-crime books. His murdering and cannibalization of at least 17 young men provided fodder for numerous TV special and documentaries, but in a particularly shocking move at the time, a feature film went into production mere months after his arrest and went straight to home video in 1993. Blood Diner star Carl Crew took on writing and producing duties while starring as Dahmer as well, offering a grisly and unflinching character study that had more to offer than most viewers expected from non-theatrical horror films at the time. The film actually doesn't cover much of Dahmer's fate after his conviction, obviously, which culminated in his 1994 murder in prison. A more upscale (relatively speaking) biopic was later made in 2002 starring a pre-Hurt Locker Jeremy Renner, though it avoided the rawness and brutality of this version. 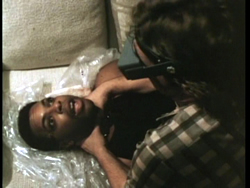 Most people know the gist of this case already, but for the uninitiated, Dahmer was a registered sex offender in Wisconsin whose sporadic homicides led to a one-year spree beginning in 1990 when he lived alone in a now-demolished apartment building. The film depicts this descent into madness via numerous voiceovers from Dahmer, who begins as a lonely and confused young man desperate for companionship but soon transforms into a malicious, manipulative psychopath. The string of murders was marked by some outrageous twists of fate, including a 14-year-old victim who escaped only to find police protection not as easy as one might hope. 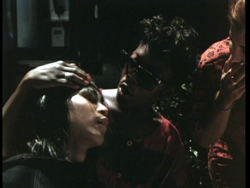 Though obviously grim and filled with grotesque flourishes, this film thankfully dodges some of the extreme depravity of Dahmer's crimes with many of the details left to the viewer's imagination. In tone it's not unlike the '70s favorite Deranged, which was based on another infamous Wisconsin murderer, Ed Gein; the matter-of-fact representation manages somewhat to overcome the obviously low budget, and Crew's dedicated performance is solid enough to compensate from his less experienced supporting cast. No one will ever call this one a neglected masterpiece given the obvious sensationalism behind its creation, but all things considered, it's amazing the film turned out this well.

The original VHS release of The Secret Life: Jeffrey Dahmer (simply titled The Secret Life onscreen) was promoted heavily in the media as a cash-in on the still-fresh murders, and to make it even more shameless, the cover art shamelessly ripped off the same year's poster art for The Firm with Tom Cruise. The original label, Magnum, eventually passed it on to a reissue nine years later from Dead Alive, but the first DVD edition took another decade to arrive from Intervision. This still looks like a tape master, of course, with that familiar soft, saturated early '90s look found in pretty much every erotic thriller through the late '90s. You probably can't get better than this since it was evidently shot on scruffy-looking 16mm and completed on video, including video-generated titles. Along with the original trailer, the big extra here is a new audio commentary with Crew and director David R. Bowen, who spend a lot of time discussing their motives for the project, their encounters with family members of the victims, a very thorough overview of the real Dahmer chronology, and their thoughts on the actual crimes including some interaction with Dahmer's family and even an offer to speak with him in prison.