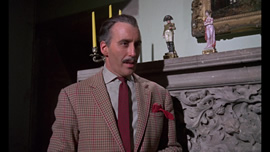 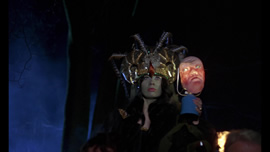 The work of visionary Rhode Island writer H.P. Lovecraft has been notoriously difficult to adapt to the screen, with his trademark blend of cosmic dread and implied monstrous mayhem challenging more than a handful of filmmakers to adapt his unearthly visions to the big screen. However, a small handful of films have managed to beat the odds and do justice to his evocative prose, standing as rare achievements as literary adaptations and rip-roaring horror yarns in their own right.

The Crimson Cult is not one of those films. Better known in Europe and on television as Curse of the Crimson Altar, this was American International Pictures' third of four attempts to bring Lovecraft to the screen after The Haunted Palace and Die, Monster, Die! (followed by The Dunwich Horror), and it's definitely the nuttiest of the quartet as it barely tries to be a horror film at all despite the presence of numerous horror icons in the cast. Instead we get a heavy dose of girlie naughtiness, much of it packed into the first 15 minutes, thanks to the fact that this was actually co-produced in England by Tigon, the company behind the same year's Witchfinder General (which managed to overcome its obligatory doses of topless cheesecake) and such future films as Blood on Satan's Claw and Virgin Witch. AIP cut out all of the nudity and released with a PG rating in the United States, leaving baffled patrons wondering what the heck was going on and why Barbara Steele was wearing a ram's horn headdress with lots of screaming and whipping noises on the 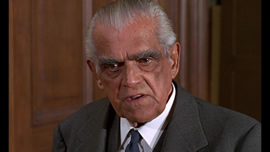 At a remote country estate called Craxted Lodge, nefarious deeds are afoot with newcomers subjected to intense nightmares involving a green-skinned occult priestess named Lavinia (Steele) overseeing kinky tortures and demanding the dream subjects to write their names in an ancient book. Squire Morley (Lee) and his niece, Eve (Wetherell), don't seem to be suffering any ill effects, and in fact Eve's friends have no problem getting together for nocturnal parties filled with body painting, champagne baths, and other revelry. Into the middle of one of these parties steps Robert Manning (Eden), an antique dealer looking for his missing brother, Peter, who was headed to do some appraisals at the mansion. As it turns out, the whole region seems to have odd ties to Lavinia including an annual celebration complete with a bonfire 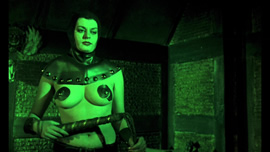 to commemorate her burning at the stake centuries ago. Robert becomes infatuated with Eve but soon finds his nights at the house plagued by visions of Lavinia, who harbors a terrible secret tied to his family.

Taken on its own terms, The Crimson Cult is a lot of fun as long as you set aside any hopes of being remotely frightened (apart from the horrifying fashion choices) by this loose adaptation of Lovecraft's "Dreams in the Witch House," later filmed far more faithfully by Stuart Gordon for Masters of Horror. Karloff plays a good guy here, a wheelchair-bound historian on all supernatural matters, and he acquits himself nicely in a dignified role. Lee is given less to do apart from looking mildly sinister and imparting history about the house, while Steele gets about two minutes of screen time and less than ten lines of dialogue; however, that costume is certainly one for the ages. That means it's really up to Eden (a British TV vet) and the ready-to-peel Wetherell (later seen in A Clockwork Orange) 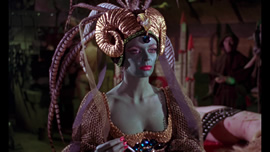 to do the heavy lifting for much of the running time, and while they're competent, they can't compete at all with their more dynamic co-stars. On top of that you get a fun, scenery-chewing turn by great horror character actor Michael Gough, playing a wicked henchman of course. Lending the film a particularly strange air is the fact that it was shot inside a real location instead of sets, in this case the famous Grim's Dyke House in Middlesex once owned by opera legend William S. Gilbert, which is captured with harsh, shadowy lighting and odd angles that alternate between striking and amateurish from scene to scene.

Despite its cast, the film did only middling business and was extremely difficult to see well into the 1980s, with a VHS release from HBO Video almost impossible to come by without some heavy hunting. Once the film passed over into the Orion library it popped up completely uncut on laserdisc from Image in a double bill with The Haunted Palace, and like many of the inherited Orion AIP titles, it sported an entirely new soundtrack composed for synthesizer by Kendall Schmidt (who also did the same duties on Planet of the Vampires, Journey to the Seventh Planet, Scream and Scream Again, Witchfinder General, and many others). That was the last time it saw an official home video release for decades, with a British DVD finally popping up in 2005 from Simply Media containing an anamorphic transfer with the original orchestral Peter Knight score (which is fine but no great shakes) but suffering from significant censor cuts to all of the nudity. That disc contains the trailer, a 24-minute Christopher Lee chat about working with Karloff, and a stills and poster gallery.

Things improved in 2014 with the British Blu-ray from Odeon as Curse of the Crimson Altar, which features a gorgeous HD transfer prepared by MGM containing the original score,and all of the 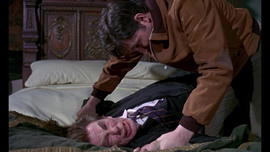 oft-censored footage (the pasty-covered breasts in the opening dream sequence, Wetherell's topless and rear shots, etc.). The psychedelic colors look great with the stylized green, red, and blue lighting in particular popping right off the screen, and the 1.66:1 framing looks accurate. That disc contains an audio commentary with Steele and David Del Valle, which focuses more on her career at the time and the working habits and achievements of Karloff and Lee than the feature itself (which is understandable since she's barely in it), plus a gallery, British trailer, "In Conversation with Christopher Lee" discussion for 47 minutes about his horror days and other life experiences including his military tenure, and a 25-minute "Creating the Curse of the Crimson Altar" featurette with Eden, Wetherell, continuity supervisor Mary Spain, and editor 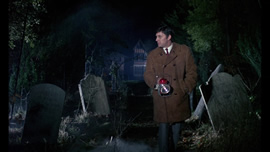 Howard Lanning about the film's original shooting title (Redemption), the wildly inappropriate clothing, and much more.

The following year, the film finally returned to American shores from Kino Lorber with a Blu-ray featuring the same satisfying HD transfer from MGM but with two significant differences. The Kendall Schmidt score is back, and the opening titles have been altered to reflect it. Apparently there's no chance of the theatrical score being legally cleared for home video release in the United States soon (though it has played on MGM HD), so now people can easily compare the two. As mentioned before, the Knight score isn't a masterpiece so the dreamy electronic substitution isn't among the more outrageous AIP substitutions from the Orion days; in fact, it sometimes works quite well. However, the weirdest aspect is the fact that the Schmidt music vanishes entirely for the climax of the film, indicating he either didn't have time to finish it or someone at Orion dropped the ball and forgot to mix it in. That means the entire fiery climax plays out with nothing but crackling sound effects as the actors look on for what seems like an eternity, creating an unintentional comic effect for what was originally a big dramatic crescendo for the narrative. The UK trailer and Christopher Lee featurette are carried over here along with the audio commentary, while new additions include the American trailer and, more significantly, a 13-minute video interview with Kendall Schmidt, who cheerfully explains how the whole Orion rescoring situation evolved when he was recruited by a lawyer friend at the company. He covers virtually every title he worked on starting with Slaughter's Big Rip-Off and offers a lot of detail about the lengthy process of music clearances that defeated some of the releases, and he chats quite a bit about his own working process and what he's doing now. For horror fans of a certain age who cut their teeth in the '80s, this extra will be worth the price of admission by itself as a valuable slice of early home video history.