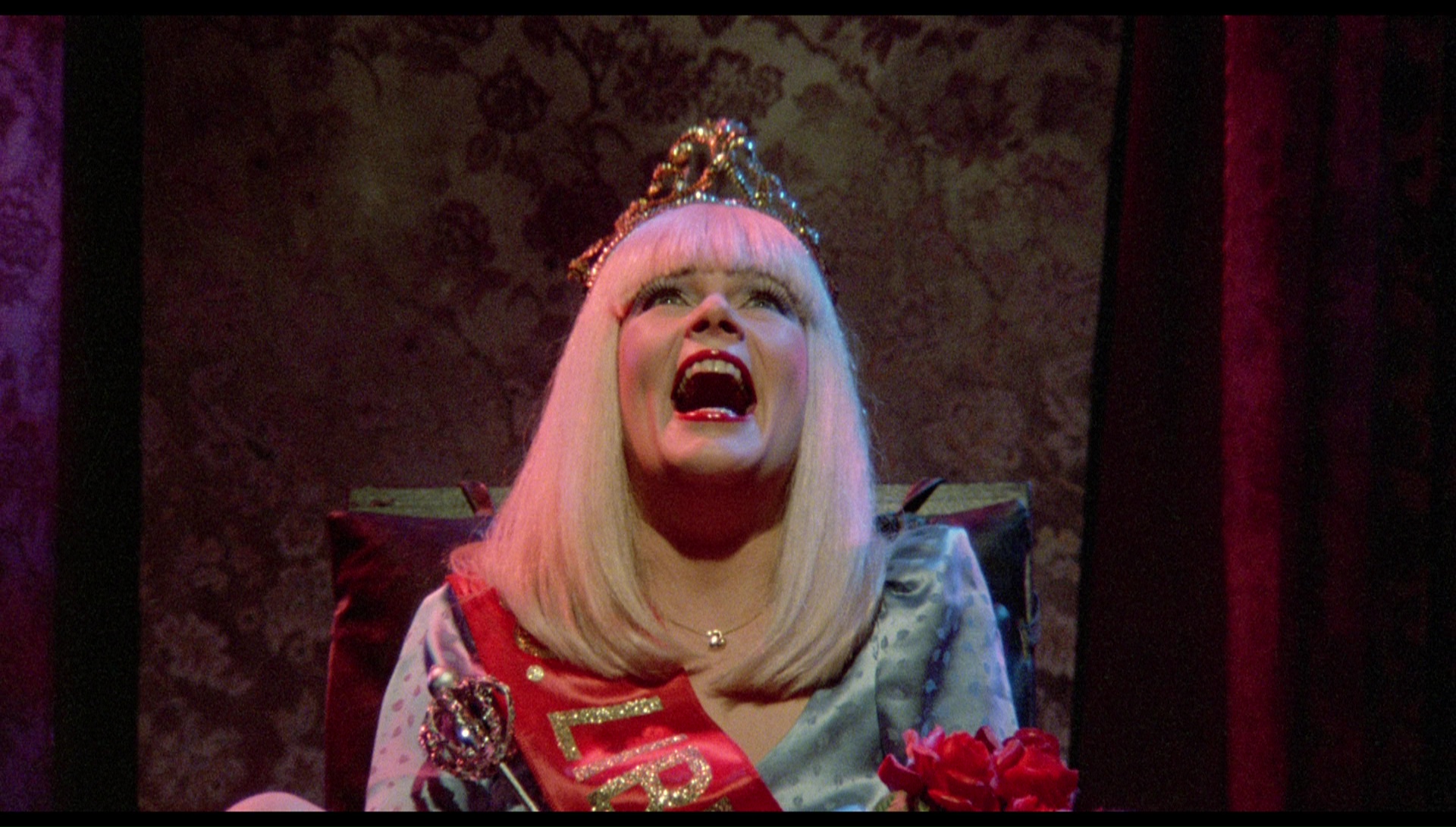 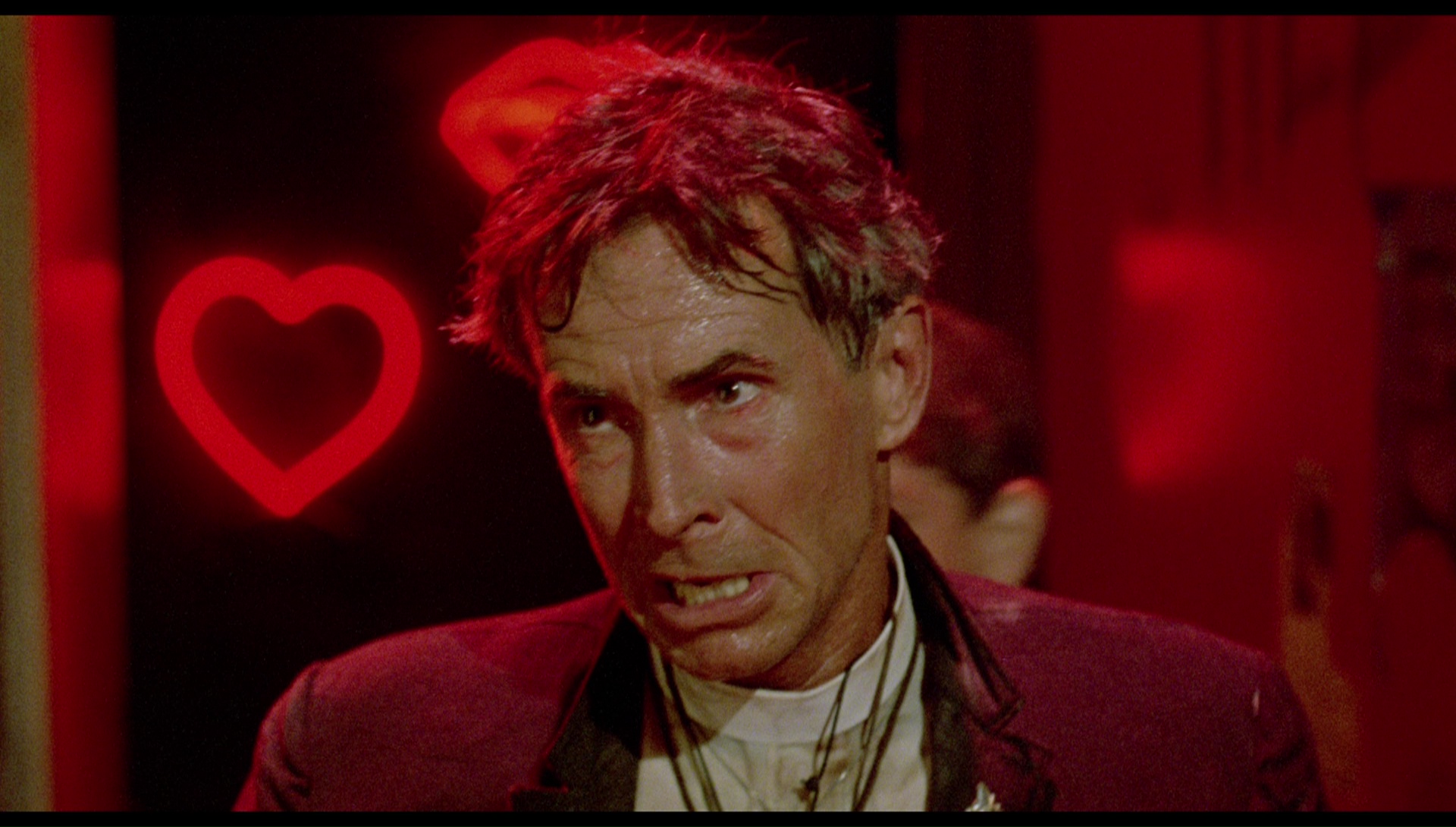 Famously talented and controversial director Ken Russell staged a comeback of sorts in 1980 after a three-year Hollywood exile with Altered States, but it took another four years before he assaulted the big screen again with what would prove to be one of his most notorious films. Recently sold off by Roger Corman, New World Pictures was moving further into the mainstream in 1984 with films like The Philadelphia Experiment and a move into TV production, so it seemed like a sure thing to release a sexy thriller directed by Russell with Kathleen Turner (a hot property from the same year’s hit Romancing the Stone and the earlier film noir homage Body Heat) in a showy role as a businesswoman who moonlights as a flamboyant prostitute.

However, things didn’t go as planned when the MPAA balked at Russell’s cut, which underwent massive cuts and restructuring that substantially lessened the film’s visceral impact and flubbed some key story points. In fact, the film proved to be so extreme that it made Brian De Palma’s Body Double look genteel when it was submitted at the same time, with that latter film getting an R rating almost entirely unscathed. Fortunately the unrated version (with a blazing red VHS box cover) became a hot property on home video, and the R-rated cut has since been consigned to oblivion.

Urban call girl China Blue is skilled at turning tricks and a phrase, often at the same time, with her satin outfits and platinum wig earning her a steady stream of middle-aged male clients. Her flashy persona soon grabs the attention of two very different men: the Reverend Peter Shayne (Perkins), a poppers-sniffing street preacher who enjoys peep shows and violent sexual fantasies, and Bobby Grady (Laughlin), a security expert hired by a company boss to shadow one of his employees, Joanna Crane (Turner), whom he suspects is betraying him to the competition. Bobby discovers that Joanna and China Blue are one and the same, and he soon becomes entangled in her world of sexual extremes and manipulation. The relationship soon takes its toll on Bobby’s marriage to Amy (Designing Women’s Potts), who has a far lower sex drive than her husband, and Joanna/China Blue 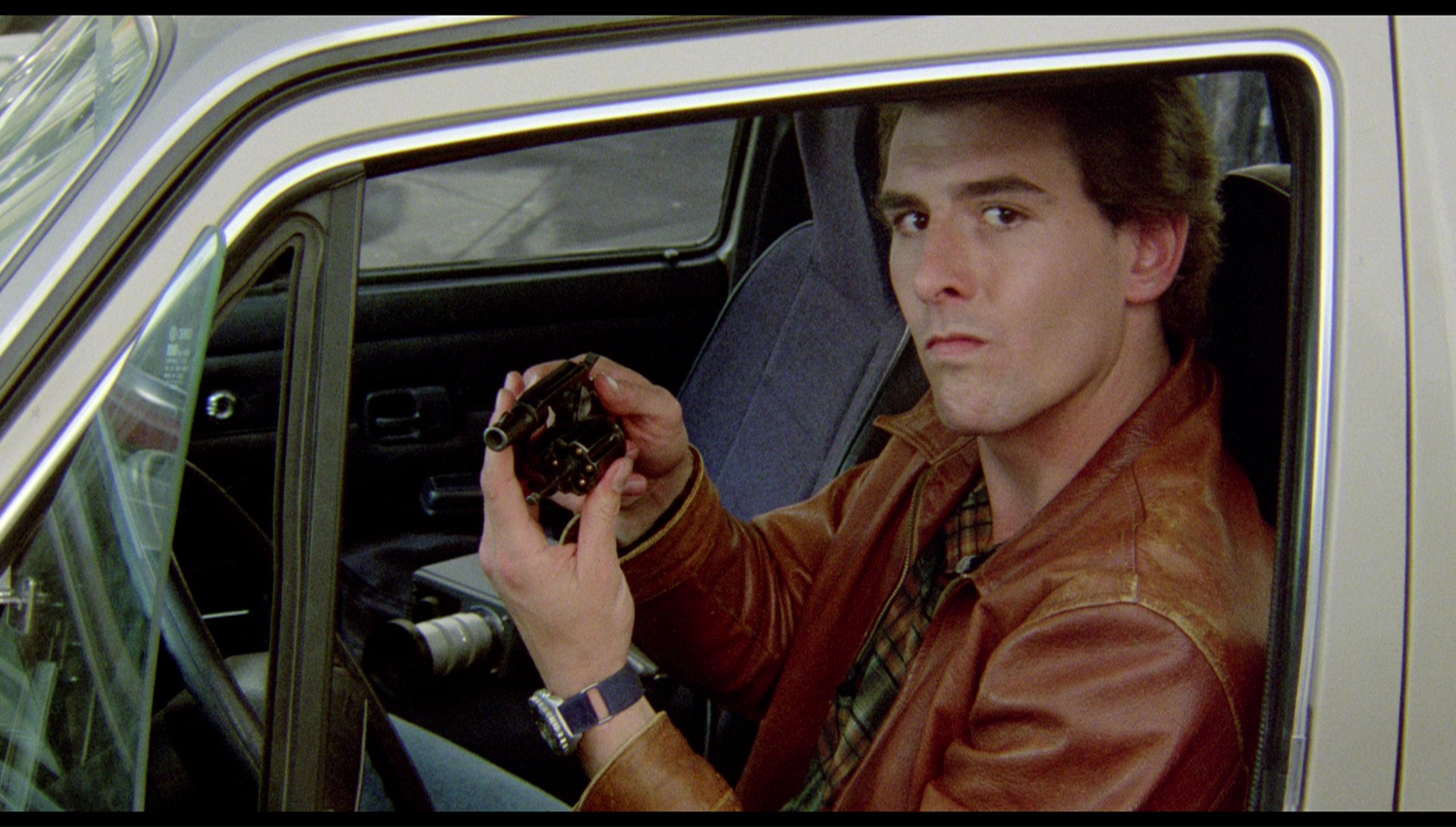 is forced to deal with numerous personal demons and a deeply psychotic Shayne who has his own twisted plans in mind.

Though most critics trashed the film upon its release for what were perceived as unbridled excesses, Crimes of Passion quickly found a fan 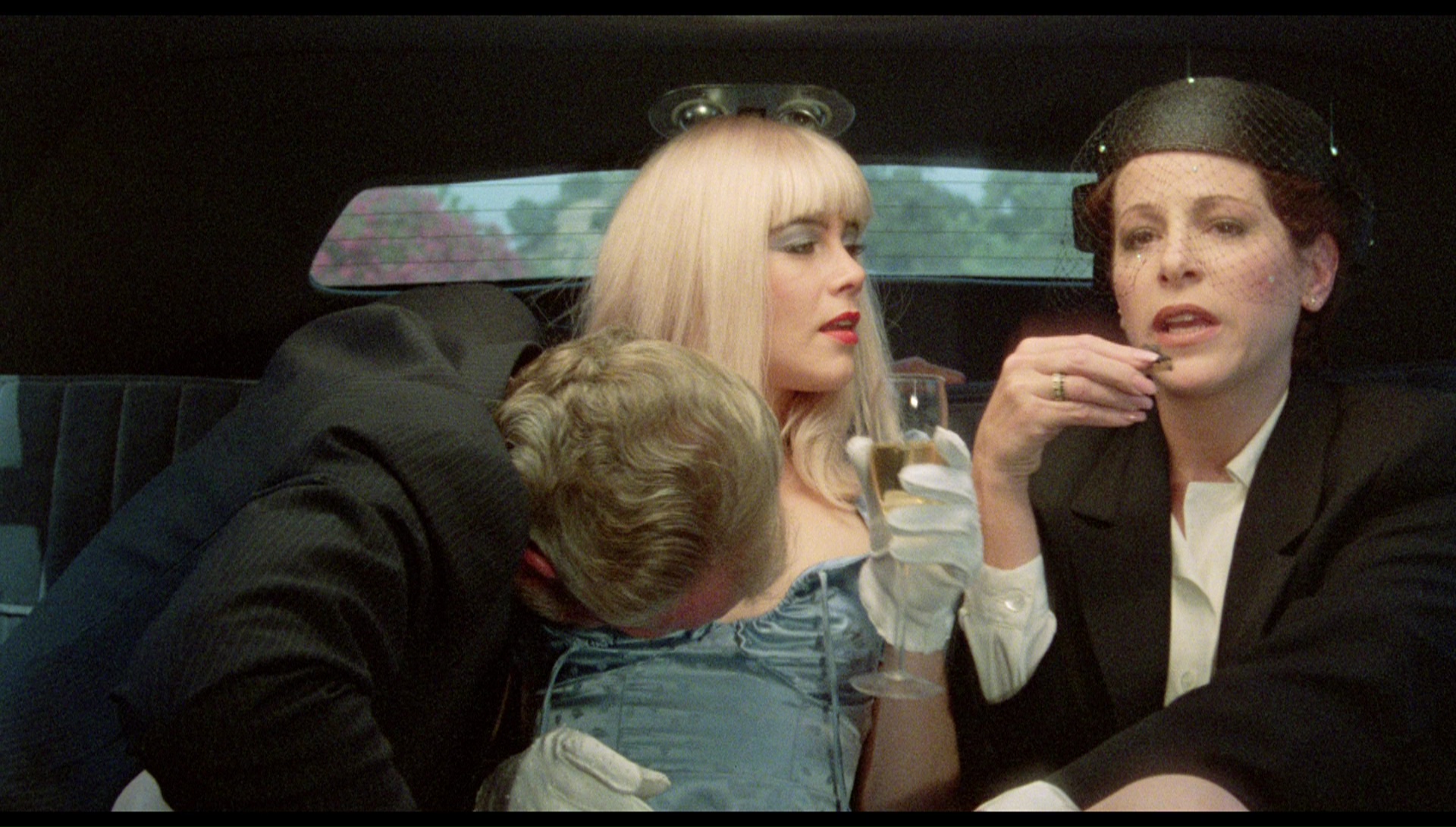 base and continues to age remarkably well. Obviously it’s a great showcase for Turner, who’s incapable of giving a bad performance but really pulls out all the stops here, while Perkins clearly relishes the opportunity to cut loose in a role that clearly nods to his most famous role as Norman Bates but taken to a sweaty, twitchy extreme. Laughlin has less to do in a role that wouldn’t tax most soap actors, but he does get a few memorable moments (particularly his afternoon barbecue performance of “the ol’ HP”). In its uncensored form, the film is still quite startling with a barrage of hilariously vulgar dialogue and intense encounters between China Blue and her johns, the most notorious involving a cop and his nightstick (which was deleted entirely from the R-rated version for very obvious reasons). On top of that you get a truly bizarre score by prog rock legend Rick Wakeman in one of his very few narrative feature film gigs (following The Burning and Russell’s Lisztomania). He even provides a nutty, abrasive theme song, “It’s a Lovely Life,” which grinds the film to a halt for a few minutes in a nod to MTV culture at the time. The film isn't perfect (Potts's character is tough to like even she's largely in the right, and the climax makes zero sense if you think about it for even two seconds), but as far as audacious American productions go, you'll find few equals in that decade. 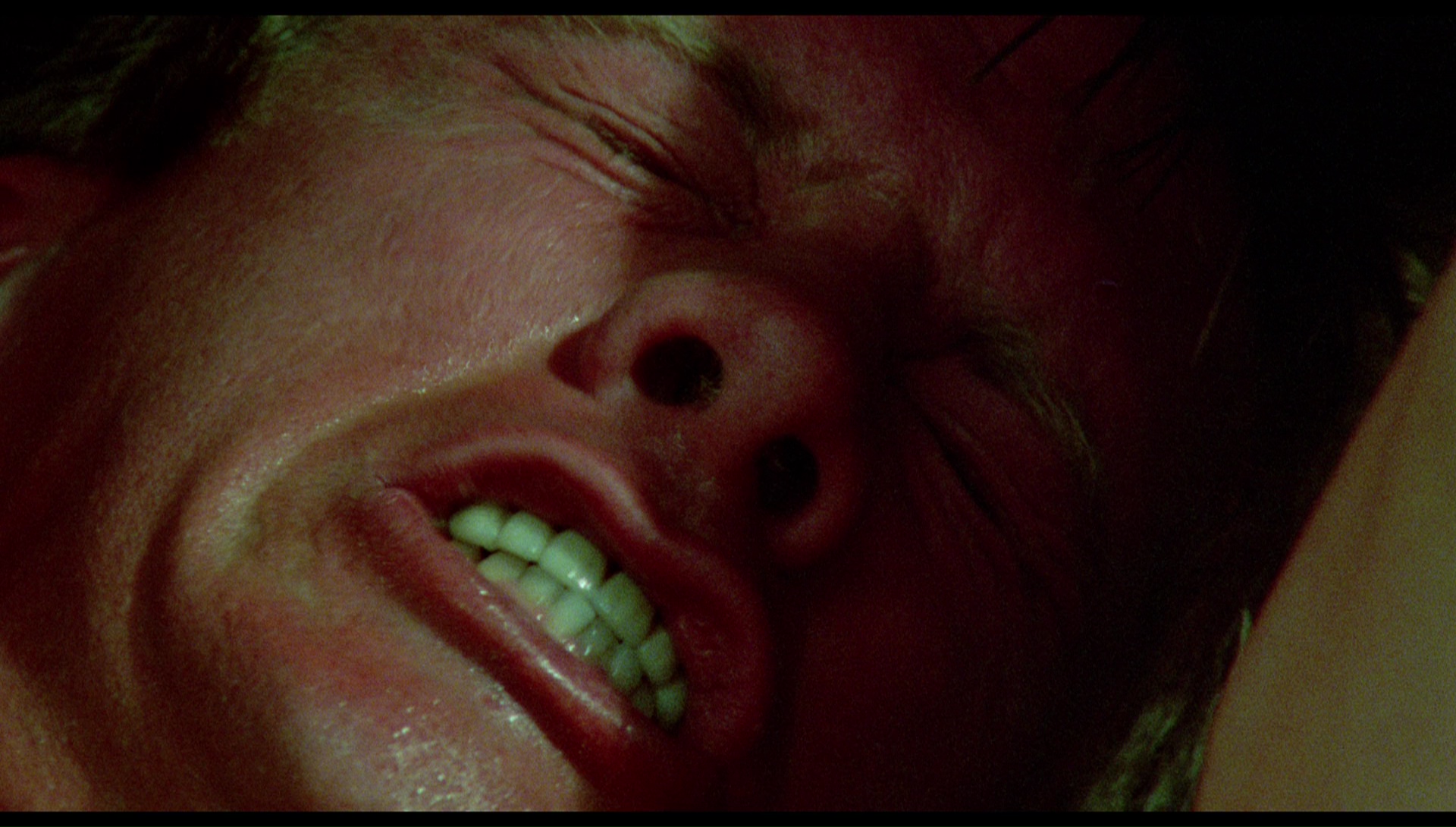 The first special edition of Crimes of Passion actually appeared on laserdisc in 1996 from Lumivision, featuring one of the most infamous commentary tracks ever recorded courtesy of screenwriter Barry Sandler (who had previously written Making Love and the very catty The Mirror Crack’d) and Russell, who simply wanders off and disappears well before the end of the film! Sandler actually does a good job of sharing recollections about the film and the cast’s grappling with some highly stylized but painful material, while Russell… well, he starts of well, but if you’ve seen any post-‘70s interviews with the late director, you’ll know what to expect.

That same commentary appeared on the Anchor Bay DVD released in 2002, which bore a cover claim of being “Unrated. Uncensored. Including Newly-Restored, Never-Before-Seen Footage.” That turned out to be true as the disc reinstated a lengthy sequence just over half an hour into the film in which Bobby infiltrates China Blue’s apartment and rifles through her belongings, slowly leafing through books of explicit artwork while a porn film with Joey Silvera plays on TV. The sequence doesn’t really add a thing to the movie beyond a few more minutes of gaudy red and blue lighting and some extra titillation value stopping just shy of going full hardcore on the TV set, but it’s nice to have for the sake of curiosity. The DVD also ported over other extras from the laserdisc including the theatrical trailer and a batch of seven deleted scenes (with optional Sandler commentary), the most fascinating offering what would have been the only time shared between Turner and Potts on screen. Incidentally, a worthless  earlier DVD from Anchor Bay was released in 2000, featuring a non-anamorphic transfer and no extras. 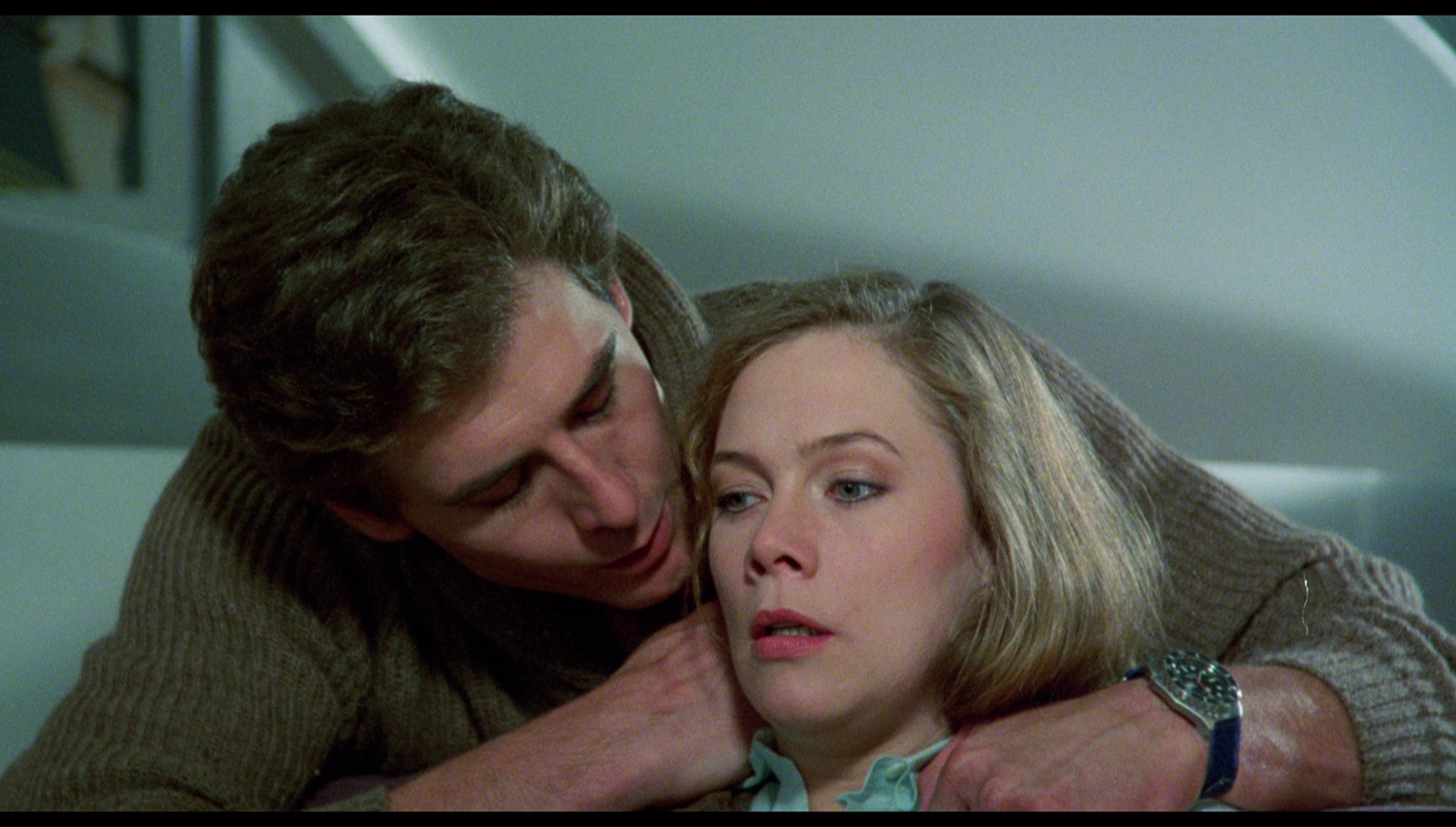 Unlike much of the ‘80s New World library, this one never passed into the hands of Image Entertainment for a DVD or Blu-ray release; that’s probably for the best given the caliber of material they were given. That meant the Anchor Bay release went out of circulation for several years with prices driven way beyond the limits of human sanity, but fortunately it’s not a factor anymore thanks to the 2016 reissue from Arrow Video in both the US and the UK as a dual-format edition with a Blu-ray and DVD (containing identical extras). The intense levels of red and pink (and every shade in between) in the film proved to be a major challenge to standard definition, so it’s nice to report that the Blu-ray does a better job of handling the film’s more visually aggressive color schemes and delivering detail that was previously smothered. It still looks like an ‘80s New World film (fairly 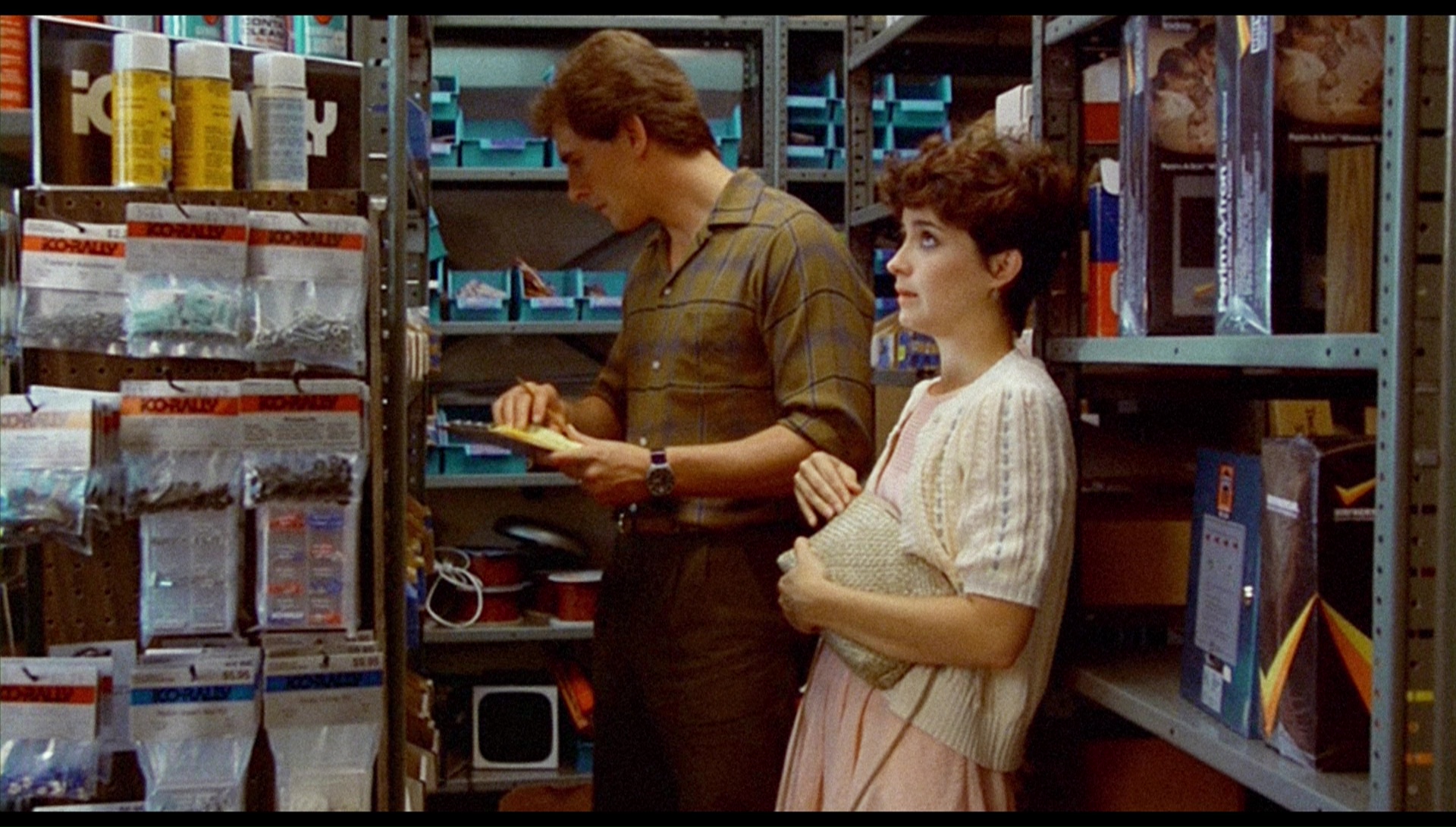 gritty, inconsistent blacks, etc.; think Hellraiser or Creepshow 2), but this is likely as good as it’s going to get for home theater viewing. Significantly, this marks the first time the unrated version and the director’s cut have ever been available in the same package; the latter reinstates that extra material from what appears to be the same SD source used for the DVD, so you’ll notice the quality dips for a few minutes. Anyone new to the film or looking to show it off to potential fans may want to stick with the unrated cut, which looks the best from start to finish and has better pacing, but it’s great to finally have both options together. The DTS-HD MA mono audio sounds excellent either way, and optional English subtitles are provided.

The trailer, commentary, and deleted scenes are all carried over here, but some new goodies have been added as well. The 22-minute "Barry Sandler: Life of Crime" covers some of the writer's previous work (mainly Kansas City Bomber, which he pitched as a college student to Raquel Welch, and Making Love) before launching into anecdotes about Russell and his insistence of keeping the film intact and his faithfulness to the script, apart from ordained minister Perkins switching his character from a psychiatrist to a preacher. (As Russell noted later in his autobiography, Perkins even officiated the director's marriage during the film's production.) In the 28-minute "Rick Wakeman: Composing for Ken," the cheerful musician shares his own memories of his Russell projects including getting spray painted gold to play Thor for Lisztomania and adapting Dvořák's "New World Symphony" for his aggressive score in this film. Also included is a music video for "It’s a Lovely Life," which essentially fills out the one you see in the film with other bits from Crimes of Passion and longer looks at Wakeman as a photographer. How they expected this to promote the film or get any MTV play is anyone's guess, but it's definitely a nice extra to have. (Russell would direct a music video for Andrew Lloyd Webber's "The Phantom of the Opera" soon after this, incredibly enough.) As usual you get a reversible sleeve with a new design by Twins of Evil on the front and the original poster art on the reverse, while the first pressing also includes a liner notes booklet with a new essay by Paul Sutton, a Russell print interview, and notes written between Russell and Kathleen Turner. An unforgettable experience to be sure, presented in its best edition to date.