In 1987, Barbet Schroeder completed and released a booze-laden biopic of writer Charles Bukowski entitled Barfly, starring Mickey Rourke and Faye Dunaway. The same year the art house crowd was soaking in that 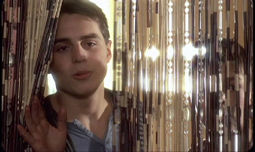 distilled vision of lowlife philosophy, Belgium unleashed a far more bizarre and challenging Bukowski epic, Crazy Love, which briefly made the rounds in theaters often under the title Love Is a Dog from Hell. The first feature effort for director Dominique Deruddere (whose Everybody's Famous garnered an Oscar nomination three years later), Crazy Love began as a short film entitled "A Foggy Night," based on Bukowski's taboo-breaking short story, "The Copulating Mermaid of Venice, CA." Deciding to expand the short into a complete film, the filmmakers trotted over to America with their film in tow to receive Bukowski's blessing; fortunately the writer was pleased and felt they had even improved on the source material.

A difficult film to discuss without giving away some of its more perverse elements, this trio of vignettes in the life of Harry Voss begins with his childhood as a nine-year-old boy (Hunaerts) growing up in a small village. While watching a fairy tale adventure in a movie theater, he becomes obsessed with the beautiful lead princess in the film and even steals a lobby card from the theater to keep as a fantasy object at home. Harry's fantasies provoke his disillusioned mother into making up an elaborate story about how his father 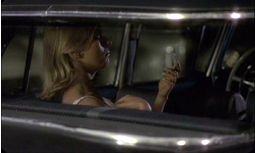 kidnapped her and wooed her on a remote mountaintop, further fueling his confusion. Harry's older friend Stan (Pas) tries to explain the truth about sex and even attempts to initiate the lad into the world of carnal pleasure, first with a loose girl at a carnival and then with the sleeping mother of one of his classmates. Thwarted, Stan makes a last ditch effort at demonstrating the wonders of sexuality that leaves the poor kid worse off than ever.

Flash forward ten years later, as teenage Harry (de Pauw) suffers life as an outcast at school thanks to an outrageously overdeveloped case of acne. Often closeted away listening to pop songs, he longs for beautiful blonde Liza (Anne Van Essche) and devotes a poem to her. His classmate Jeff (The Vanishing's Bervoets) urges him to ask his beloved for a dance at school; when Harry proves too timid, both boys take drastic actions that result in an unforgettable night.

Jumping forward again to full adulthood, Harry is a destitute, jaded soul prone to lingering in bars with his one friend, Bill (Chakir). Now the complete polar opposite of his youthful self, he finds suppressed emotions awakening again one night when the two men stumble across something unexpected lying in the road... and Harry realizes his own twisted destiny.

Though the subject matter may seem wholly depressing, Deruddere keeps the film quirky and engaging thanks to a beautiful visual sense filled with unexpected poetic touches straight out of a fairy tale. The simple scene of young Harry and Stan watching a sleeping woman is elevated to high art thanks to careful lighting and the actors' sincere performances, while the final story is given a haunting, 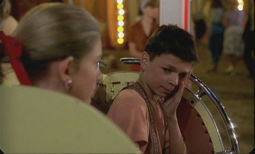 gothic sheen thanks to the diffused lighting, eerie fog, and beautifull composed final shots. The middle section, arguably the strongest narrative piece in the film and featuring the indelible image of Harry dancing with his face swathed in bandages, also sports the best use of music with live pop songs often commenting wryly on the action. Though not technically a horror film (mainly because it keeps its more extreme elements implied rather than explicitly shown), Crazy Love still treads closely enough thanks to its mingling of sexual curiosity and bodily horror in the same vein as David Cronenberg, albeit with a more naturalistic touch. This is extreme cinema more through conception rather than execution.

Mondo Macabro's DVD of this oddball gem contains a solid transfer of the film; picture quality is colorful and sharp, and the film-like grain from the source appears to be intentional. Optional English subtitles are well-written and easy to read. Considering its relative obscurity, the film contains a solid amount of extras with the participation of Deruddere. The director contributes a thorough 24-minute video interview covering a wide number of topics, all interesting: the creation of the lead character's acne; his first meeting and bar experiences with Bukowski; the critical response to the film; and most hilariously, the inspiration for the film's masturbation scene thanks to a real life incident involving his brother.

"The Crazy Love Archives," a 2003 documentary clocking in at just over half an hour, covers the director's career (including many clips from his earlier short films), showcases the actors' previous work, offers some well-chosen behind-the-scenes footage, and features interviews with Bukowski ("I don't hate people; they disgust me and I want to get away from them"), Deruddere again (who cites Coppolla's One from the Heart as a major influence), de Pauw, Pas, writer Marc Didden, cinematographer Willy Stassen, editor Guide Henderickz, and producer Alain Keytsman. The disc then wraps up with "Crazy Love and Belgian Cinema" (a short essay devoted to Flemish-language cinema fantastique) and a promo reel for other Mondo Macabro titles.