Released in Japan shortly after the teen movie craze really broke through in the West (mainly thanks to James Dean's Rebel without a Cause the previous year), Crazed Fruit (Kurutta kajitsu) is 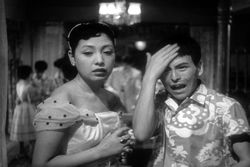 Adapted by controversial writer Shintarô Ishihara (Pale Flower) from his novel, the story is a standard love triangle: sexy young girl Eri (Mie Kitahara) becomes the object of lust for two very different brothers, Natsuhisa (Yujiro Ishihara) and the far more unstable Haruji (Masahiko Tsugawa), with predictably heated and violent results. However, the cinematic treatment manages to lift the melodrama into gloriously heightened territory (think Douglas Sirk, only hornier and with college students); dinner parties turn into covert groping opportunities under the trees, simple afternoon boating expeditions turn into explosions of passion, and each sweltering summer day offer another chance for sex and betrayal. Sound fun? You bet, and it's no surprise to learn 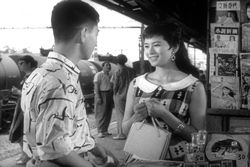 this was a product of the infamous Nikkatsu Studios, who later pioneered the pink film genre. There's nothing even remotely graphic on display here, but the presentation of human sexuality as an unstoppable element of mother nature is light years beyond the coy sniggering of most "sexy" American films of the period. In fact, the sex=water symbolism is so potent here, no one could come close to touching it until the sexy French crime classic Purple Noon.

Though successful in Japan, Crazed Fruit rarely appeared in any English-friendly presentations but managed to impress enough 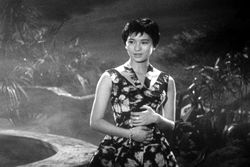 admirers to sustain a worthy global reputation. (Supposedly it did pop up in the U.S. briefly as Juvenile Jungle!) Criterion's DVD is bound to introduce a much larger audience to its strange, iconoclastic pleasures, as long as one is prepared for a somewhat more sensual and suggestive experience than the more turbo-charged Japanese classics (Fukasaku, Suzuki, etc.).

The full frame transfer looks very nice overall; the deliberately rough-looking cinematography in a few scenes results in some deliberate textural grunge, but the daylight scenes (especially on the water) looks crystal clear. The Japanese mono audio sounds perfectly clear, with excellent, literate (optional) English subtitles. The disc also includes a theatrical trailer and an exhaustive commentary by Japanese cinema specialist Donald Richie (who explicates the film's inaugural placement in the short-lived "Sun Tribe" cycle of teen-oriented films). The disc comes packaged with a hefty booklet containing an essay by Michael Raine focusing on the entire Sun Tribe phenomenon and a very enjoyable analysis of the film by Chuck Stephens, who memorably characterizes the film as "stained with hormonal sea spray and ideological lip sweat."