Years before he became one of the most recognizable producers in the drive-in business, Roger Corman hit the ground running in the mid-'50s by churning out at least four films a year and catching the attention of indie distributors like American-International Pictures. His first big breakthrough came in '56 with It Conquered the World, a goofy but brilliantly marketed sci-fi quickie with Peter Graves and Beverly Garland, but it wasn't until the next year that he began a full-throttle cinematic assault on America's teenagers with a slew of horror, sci-fi, and kids-run-rampant hits. Fondly remembered but rarely seen in anything close to quality versions is his trilogy of Allied Artists favorites, Attack of the Crab Monsters, Not of This Earth, and War of the Satellites, all of which sport members of his familiar acting pool like Dick Miller and Jonathan Haze who went on to favorites like The Little Shop of Horrors.

One of Corman's most famous films simply by virtue of its title alone, the entertaining Attack of the Crab Monsters sports a setup similar to countless other '50s films as a group of adventurous scientists winds up on a remote Pacific island used for nuclear testing. The previous inhabitants have all disappeared, but no one initally seems to know why. (Of course, anyone who bothered reading the title card already has a pretty good idea.) Soon they're all under attack from enormous, mutated crabs (equipped with vocal cords, no less), and it'll take some drastic sacrifices from the group to avoid getting snipped into crab food. Oh, and the island is slowly collapsing into the sea, which adds even more urgency to the struggle between man and megacrab.

Unlike many of its peers, Crab Monsters moves along at a nice clip and features some wonderfully bizarre, cartoonish main titles designed by Paul Julian, a regular Warner Bros. artist on dozens of Looney Tunes doing a little side work. His striking designs here earned him work on four subsequent Corman titles, culminating in his wild design work for the credits of Dementia-13. The cast contains features a few familiar faces among the potential victims including Russell Johnson (in between This Island Earth and his most famous stint as the Professor on TV's Gilligan's Island), reliable ham Mel Welles (who went on to helm Lady Frankenstein), a bit role for screenwriter Charles B. Griffith, and a leading man role for Richard Garland (husband of Beverly), who also appeared in Corman's The Undead the same year and, incredibly, passed away at the age of 41. Behind the camera are some other major Corman names including cinematographer Floyd Crosby (who shot almost all of the Corman/Poe films) and underrated composer Ronald Stein, who seemed to alternate Corman assignments with Les Baxter.

The few video versions of Crab Monsters over the years have been a truly sorry bunch, including a mysterious, wildly overpriced DVD from "Allied Artists Classics" whose legitimacy still seems to be up in the air. In any case, Shout Factory's release is a much-needed overhaul on every front. The anamorphic transfer is many generations clearer than we've had before, and while there's a little damage here and there, it's really negligible and barely worth mentioning considering the quality of the upgrade. Also included is the extra footage used to pad the film out to 70 minutes for TV prints, a bloated version that more people have probably seen than the lean theatrical cut. Sadly this would prove to be the case with quite a few other Corman films, most notoriously with The Wasp Woman. 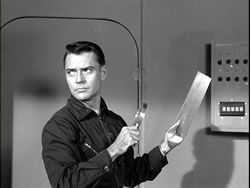 That's just feature number one though. Next up is the same year's Not of This Earth, the frequent co-feature on double bills with Crab Monsters (and which was actually shot before it), with Beverly Garland taking over as the lead to play a SoCal nurse named Nadine who's tasked with providing home blood transfusions to a mysterious patient named Paul (TV actor Birch) who's always wearing sunglasses. Of course, he's actually a space vampire intent on harvesting blood to salvage his dying species from the planet of Davanna, and a Los Angeles neighborhood is just the place to do it. Both Haze and Miller get some great supporting bits in this one, and despite the fact that Corman's remade this one twice (the first time with Traci Lords), this remains one of the best films from his black and white period.

Unlike Crab Monsters, this never had a wide, even semi-legitimate release in the US prior to Shout Factory's DVD, though some very murky bootlegs floated around for years. Once again, this is a dramatic improvement across the board thanks a fresh transfer from a surprisingly well-preserved print. Again there's a scuff or speck here and there, but nothing significant. The anamorphic presentation also corrects many of the compositions, which have usually been seen open matte on TV and throw the film's visual scheme visibly out of whack. Once again some TV padding created for a new prologue is included here as an extra.

After dabbling with mixtures of sci-fi and horror, Corman jumped fully into the late '50s space race craze with War of the Satellites, which appears by itself on a second disc along with the bulk of the video extras. This one's taken from an inferior but still watchable full frame source (again, preferable by far to the bootlegs yanked from the VHS days), and the movie's still plenty of fun as weird messages from space keep warning America's space project to stop dabbling with faster rockets capable of breaking "the space barrier." The latest project's leader, Dr. Van Ponder (Devon), dies under sinister circumstances in a car crash and swiftly returns to work as an alien double intent on cutting off America's cosmic plans at any cost. Can intrepid astronaut Dave (Miller again) catch on to his boss' identity swap before they all die among the stars?

The first two films also contains extremely informative audio commentaries by monster movie experts Tom Weaver and John and Mike Brunas, who carve out the history of Allied Artists at the time, Corman's speedy filmmaking process, and the various players who flit in and out of all the films from this era. The second disc includes a lengthy video piece of Corman basically espousing all of his finest points as a producer, distributor, and director, including many of his "discoveries" like Peter Bogdanovich, Joe Dante, James Horner, and Jack Hill. (No Scorsese, Cameron, or Demme though!) Corman appears for a much quicker 12-minute interview about the relevant features on disc one, too. You also get a head-spinning 25 Corman trailers including all of Shout's titles and a bunch of other odds and ends including his PD titles (Creature from the Haunted Sea, etc.) and Frankenstein Unbound, most with fresh new transfers as well.