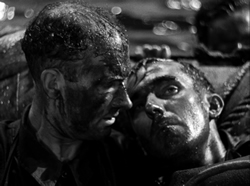 With his first official directorial credit, David Lean -- who would go on to define the large-scale international epic with Lawrence of Arabia and Doctor Zhivago -- embarked on a four-film partnership with one of the most popular playwrights of his generation, Noël Coward. In fact, their first pairing was as co-directors on In Which We Serve, a 1942 study of different strata within the British military, with Coward also playing a leading role and supplying the music score. Though it superficially could be read as a propaganda piece, it follows the tradition of films like the previous year's The 49th Parallel by imbuing the project with enough humanity and complexity to last well beyond the era of the war itself.

Sort of an anthology film, In Which We Serve chronicles the genesis and possible final moments of the H.M.S. Torrin, a British destroyer whose final military surviving passengers are first seen finding salvation with a life raft. Shorty (Mills), Hardy (Miles), and Captain Kinross (Coward) each recall their lives at home and see how they wound up defending the crown against the Germans, whose enemy planes could strike from above at any time. Much of Coward's screenplay was based on the real experiences of his friend Lord Mountbatten, and the attention to detail here really carries it above the ranks of its cinematic colleagues. A skilled editor at the time, Lean makes the transition to director with ease and pulls off a major, stirring achievement even many decades 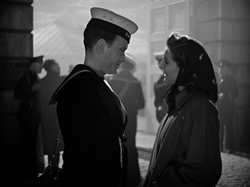 beyond the events at hand.

This film also marks the first of four titles included in Criterions' impressive David Lean Directs Noël Coward set (timed to release in 2012 for Coward's 100th birthday), available on both Blu-Ray and DVD. (But really, considering the immaculate nature of the restoriations, there's no excuse for watching these in anything less than high definition.) All four of the Lean/Coward films were restored by the BFI in 2008, and as the box itself notes, those were the film sources here -- and the results look great. Both the image quality and lossless audio are absolutely stellar, and it looks as fresh and crisp as virtually any other black-and-white title on the format to date. From the rippling water to blades of grass, it's awash in fine detail and looks like a newly struck print fresh from the lab. Optional English subtitles are included along with a video interview with Coward scholar Barry Day, which focuses on the division of labor between the two 20th century legends involved and their intentions for the film beyond simple flag waving. The longer, 24-minute "A Profile of In Which We Serve" was produced for the UK DVD release from ITV and is presented here in standard def; participants including Mills and cinematographer Ronald Neame discuss the making of the film and the daunting nature of presenting a large-scale war story on fairly limited means with two first-time directors. Finally an audio conversation from 1969 with Coward and Richard Attenborough (who made his screen debut in this film, too -- talk about a string of historical firsts) spends a very generous amount of time (nearly an hour) talking about the genesis of the film, its historical basis, and the mixture of actors both seasoned and fresh. The disc rounds out with the theatrical trailer and comes housed in a slightly larger sleeve than its companions since it also holds the liner notes booklet, containing essays about the Coward/Lean partership, the individual films, and their separate achievements by writers including 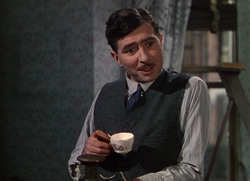 Though it was a significant hit upon its release, the second film in the set, This Happy Breed, is easily the least known today. In terms of message and sentiment it's fairly similar to a sunnier American classic from the same year, Meet Me in St. Louis, as both seem to both provoke nostalgia in their audiences for eras gone by while preparing them for 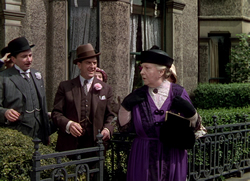 a brighter future of domestication to come. Here we have the working class Gibbons family whose patriarch, Frank (Newton, who went on to play Long John Silver in Disney's Treasure Island), finally gets his family moved in to a respectable suburban house after the end of World War I. His wife, Ethel (Johnson, a veteran from In Which We Serve who's sort of a mascot in three of this set's films), and their children spend the following years until the dawn of World War II going through the major life changes that bring both joy and sadness, picking up friends and in-laws along the way. The actors are all quite good and it's certainly valuable as a historical document, though newcomers would probably be best to hold this till their last viewing in the set as it may not win over many converts at first.

One attribute that does jump out immediately is the rich Technicolor imagery, which finds Lean already adapting from black and white with perfect skill. The restoration here is immaculate -- flesh tones look perfect, those almost supernatural blues found in the three-strip process look as rich and deep as they should, and detail looks perfectly accurate. Extras here are essentially variations on the previous disc, which seems appropriate given their overlapping cast and crew; Barry Day appears for another video piece about Coward's conception of the piece (including its ties to his Oscar-winning favorite Cavalcade), while Neame gets a lengthy 45-minute interview entitled "The Golden Age" about his work with Lean and company. This one was conducted exclusively for Criterion and does not appear on any other releases. Two theatrical trailers are also included. 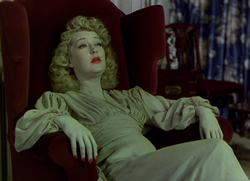 And now we get to the reason a large number of people are going to jump on this set: 1945's Blithe Spirit, Lean's adaptation of Coward's slightly naughty, supernatural comedy stage hit. This time the process was a bit different, as Coward had no involvement beyond the actual making of the film apart from giving Lean his blessing after multiple Hollywood offers (and subsequently expressing his displeasure with some of the casting and changes). This is one of the first and best ghost stories involving a remarried character whose dead husband or wife returns in time to make life very inconvenient for everyone involved; this formula would later be tweaked a number of times including Dona Flor and Her Two Husbands, Kiss Me Goodbye, and even Hellraiser. (Yes, really!) Here we have the great Rex Harrison (who would go on to play a spirit himself in The Ghost and Mrs. Muir two years later) as Charles Condomine, a writer who gets the idea to do research for his latest book, The Unseen, by inviting over a local medium, Madame Arcati (Rutherford), for a friendly seance. However, the quirky Arcati winds up summoning Charles' deceased first wife, Elvira (Hammond), as a green apparition only Charles can see and hear, while his current wife, Ruth (Cummings), is none too pleased by the turn of events.

A significant departure in every respect from the previous two Lean films, this wonderful mixture of the droll and the macabre is highli 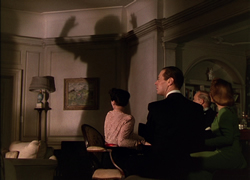 ghted by Rutherford's daffy supporting performance and the wondrous in-camera effects used to create Elvira's appearance, a combination of lime make-up and hair, lighting, and blazing red lipstick and fingernails. It's a simple but brilliant device from her first moment onscreen, a startling theatrical flourish that still makes audiences gasp. The story also takes a few surprisingly twisted turns along the way, wrapping up with a finale that's much more morbid than the one originally seen on the stage. It's also here where Lean really comes into his own with Technicolor, using it in a bold, expressive manner lost on many TV prints and home video versions. Fortunately the HD version seen here is a massive improvement over its standard def predecessors (including a really lackluster Image release back in '98 and an improved one in the UK from Carlton/ITV); it has the same heightened, intoxicating visual appearance found in Hollywood musicals of the time, with bright bursts of perfectly rendered crimson and the ghostly green-gray pallor of Hammond herself being particular standouts. Interestingly, this is the first home video version where you can actually see the subtle shifts in lighting when she moves around a room which cause her entire appearance to subtly shift in color temperature slightly. That's not a fault in the film; it's how she appeared moving from one set up to the next. The extras here are also a bit heftier this time around, with another Day interview (focusing on the issues the film encountered in the transition from the stage and Coward's profane assessment of it), a trailer, and best of all, the complete 1992 episode of the UK TV program The South Bank Show dedicated to Coward. Loads of archival photos, film and TV performance clips, and Coward chats cover the highlights of his life along with interviews with some of his colleagues including John Gielgud, John Mills, and Daniel Massey, along with 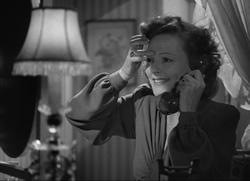 several biographers who cover everything from his childhood to his famous bond with stage legend Gertrude Lawrence.

Last up is the final and most popular pairing of Lean and Coward well into the home video, Brief Encounter, which was available previously as an already fine Blu-Ray in the UK. Coward wanted to "get back to earth" after his issues with the adaptation of his ghostly tale, and Lean not only followed his lead but went back to black and white as well -- with striking results. The story is simplicity itself as married Laura Jesson (Johnson again) happens to strike up a conversation with a doctor, Alec Harvey (Howard), at a train station café. He's also mar 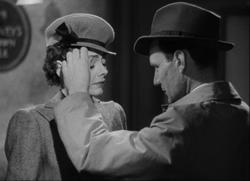 ried, but their immediate attraction leads to more meetings every week in the same location -- while their spouses back home may or may not have an inkling that something's developing out of sight.

Complete with surging Rachmaninoff music, endless banks of atmospheric fog, and excellent performances from both the leads and the supporting cast, this classic rises far above the paperback romance it could have easily become in lesser hands. The combination of Coward's sensitive writing and Lean's gift for creating universal emotions out of basic human situations reaches its perfect synthesis here (and even points the way to some of the romantic passages later in Zhivago), and even after decades of imitations and parodies, the climax still packs a palpable punch. The transfer found on the Criterion disc is also a visible winner compared to the UK disc from ITV, with more satisfactory detail and what looks like a more proportionately accurate image. Criterion has visited this film twice in standard def, first as a special edition and then as a stripped-down Essential Art House title at a lower price point. Their earlier commentary by Bruce Eder (which was recorded back in the laserdisc days but still holds up well, with more of an emphasis on Lean) is carried over her and augmented with video bonuses including another Day interview (more upbeat than the Blithe Spirit one and a nice way to round out the set) and the "A Profile of Brief Encounter" featurette commissioned for the ITV release with Neame, Kate Fleming (Johnson's daughter), and actress Margaret Barton, plus the trailer. The last extra is the only one exclusively devoted to Lean in the set: "David Lean: A Self Portrait," a wonderful hour-long 1971 TV documentary with the director himself talking about his life and work after the release of Ryan's Daughter. It's also an appropriate way to close out this set, one of the most impressive Blu-Ray collections out there for cinephiles with a literary bent. Now, if we could get a Blu-Ray set of Lean's Charles Dickens adaptations...