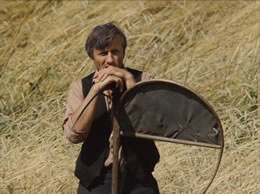 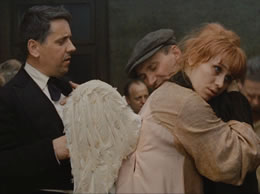 One of the many Czech films banned by the government at the end of the 1960s, this pointed drama by Vojtech Jasný (who continued to direct into the 2000s) takes a more pointed, anti-communist approach than usual. After the end of World War II, a Moravian town serves as a microcosm of sorts for the advancement of a new political regime as a close-knit group of seven friends (among them an organist, a mailman, a tailor, and a farmer) is deeply affected by the corrupting allure of "the Cause," which gradually consumes the populace after the initial honeymoon of Russian liberation from the Germans wears off.

Set over a period of a decade and a half, the film operates more as a series of vignettes illustrating the gradual transformation of the main characters (often not for the better) as the idealistic vision of a collective farming community is corrupted by the lust for power, which apparently cannot be avoided in any society. The property owners who protest become significant targets, with bullying and social ostracizing among the most common tactics of bringing them in line. If that sounds too heady, it's also a gorgeous work of artistry with some lustrous landscape shots worthy of Days of Heaven and an unexpected, surreal finale with many of the villagers dressed up in eerie 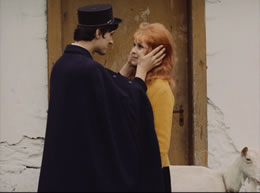 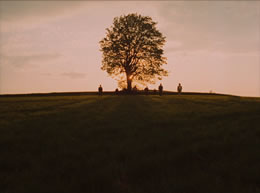 its warm reception at the Cannes Film Festival (where it nabbed two honors and played in competition for the Palme d'Or), this film became very difficult to see for several years and was primarily available on home video in a very drab presentation on VHS and DVD from Facets with burned-in subtitles (following a 1985 art house theatrical run from New Yorker).

Anyone who sat through that underwhelming experience should be astonished by Second Run's UK DVD, which comes from a recent 4K restoration of the film courtesy of the Czech National Film Archive. As you'd expect, it looks immaculate and pushes the limits of SD about as far as they can go. If this ever makes it to Blu-ray, the results should be overwhelming. Also included on the disc itself is a short film made by the director one year later, "Bohemian Rhapsody," a short film that turned out to be his swan song in his native country. Also banned (for far less obvious reasons), it's a lyrical, abstract piece of work combining beautiful landscapes with shots that could have been pulled from the main feature here including a procession of people in animal costumes. Also included is an insert booklet with liner notes by Peter Hames, who offers a very useful intro to the director's work leading up to this film and the reasons for its stormy reception at home.