Years before his commercial breakthroughs with Diabolique and Wages of Fear, director Henri-Georges Clouzot caused a stir in his homeland with this decidedly antisocial thriller, a jab at mankind's baser instincts that could be read as a contemptuous look at the behavior of Nazis (who were occupying France at the time of filming), a criticism of provincial France's petty behavior, or simply an expert whodunit packed with twists and visual flourishes. On any level, it's a film to savor. 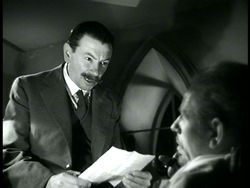 In the rapid-fire beginning, we're introduced to the inhabitants of sunny St. Robin, a country village where all goes well and life marches on. The local doctor, Dr. Germain (Grand Illusion's Fresnay), enjoys a thriving practice despite his occasional dalliances on the side... until poison pen letters are mysteriously sent to the populace, accusing the physician of moral transgressions including adultery and abortion. Signed "the Raven," these notes begin a wave of hysteria with the doctor on the verge of being ejected from the town (or worse); when one of the doctor's patients commits suicide and the scope of the letters widens to encompass other residents of the village, the area becomes a frenzy of suspicion and fear. 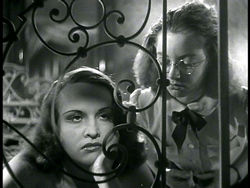 Beautifully photographed and absolutely uncompromising in its bleak cynicism, Le corbeau is a clear blueprint for Diabolique and many of the French thrillers which emerged during the 1960s, including the work of such directors as Claude Chabrol and Rene Clement. The Hitchcock comparisons are inevitable, of course, especially since Hitch tackled the same subject matter with a much sunnier demeanor in Shadow of a Doubt the same year. Where the American Master of Suspense concluded that a division between good and evil existed but could be blurred, Clouzot argues that everyone has a rotten side capable of emerging with the right trigger. 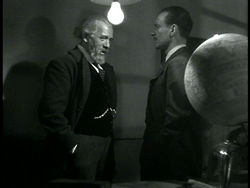 Not surprisingly, a toned-down American remake from Otto Preminger, The 13th Letter, failed to capture the same sense of paranoia and unease encapsulated perfectly in this minor classic of suspense.

Criterion's fourth Clouzot outing has to deal with the most problematic elements so far, but under the circumstances, this is the best one could expect. Even after undergoing a recent restoration, the film has a rough, ragged appearance attributable to the combination of difficult shooting conditions and improper preservation methods. Still, it's satisfying overall and much better than the smeary, badly subtitled dupes circulating for decades; in the opening shot the engravings on the tombstones are finally legible, for example, and stark white areas no longer bloom all over the screen. The optional English subtitles are a great improvement as well and much easier on the eyes. Extras include an interview with director Bertrand Tavernier, who discusses the film's impact on cinematic history and French culture, as well as Corbeau/Clouzot-related snippets from The Story of French Cinema by Those Who Made It: Grand Illusions 1939-1942, a 1975 documentary about films during the occupation (complete with dupey-looking clips from the film), and the film's stylish theatrical trailer. The liner notes contain an essay by writer Alan Williams.