When an unmanned cargo vessel drifts into New York Harbor, Police Lieutenant Tony Aris (Eurotrash perennial Marino Mase) hops aboard to see just what exactly is going on. Joined by a health inspector and related personnel, he soon stumbles upon the severely shredded carcasses of several crewmembers along with some green, pod-like objects. Baffled as to what could've happened and perplexed by the mysterious, pulsating bursas he's discovered, 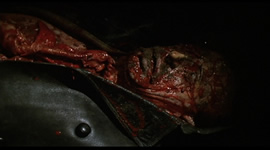 Tony gets all the answers he needs when one of the sacs erupts, dousing his companions with a viscous fluid that causes them to promptly swell up and explode in gloriously gory slo-mo! Enter Colonel Stella Holmes, a callous ice queen from the Internal Security Department who's convinced these vesicular organisms were imported from outer space, and Hubert, an assumedly daft Mars-mission astronaut (the typically ingratiating Ian McCulloch) who's dealt with this situation before. Together, the intrepid trio traces the otherworldly shipment back to a Colombian coffee farm and, in an attempt to save the world, makes the jaunt to South America. However, they quickly find their intergalactic foes still have a few surprises waiting for them.

Originally envisioned as a simple Alien rip-off, director/co-writer Luigi Cozzi (under his "Lewis Coates" anglicization) managed to incorporate the bankable elements his producers demanded (bursting bodies and extraterrestrial eggs) into a stripped-down mishmash of sci-fi conventions that somehow stands on its own two feet. Most fans tend to only discuss the outrageously splashy explodo-torsos (by Giovanni Corridori), but Cozzi is a talented director and they're only part of the reason Contamination is so much fun. To Luigi's eternal credit he sustains viewer interest, 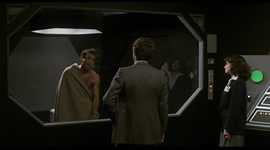 even when someone isn't blowin' up, through good use of the scenic tropical vistas and several humorous character asides (with some of the goofiest dialogue this side of Cannibal Apocalypse). The cast is definitely up to the challenge, remaining straight-faced no matter how ridiculous a situation they find themselves in, plus it's always nice to see the underused Ian McCulloch chewing up the scenery. Another major point of interest is Goblin's outstanding score. Consisting of a few recycled cues from D'amato's Beyond the Darkness along with some freshly written material (which Bruno Mattei's Hell of the Living Dead later appropriated), their excellent soundtrack has understandably become a fan favorite over the years. The out of print 1992 SLC CD release from Japan fetched some major bucks until Italy's Cinevox reissued it (with additional tracks) in 2000. Those who like their movies fun and trashy without taking things too seriously will find plenty to enjoy here.

Scripted under the moniker Alien Arrives on Earth (not to be confused with Ciro Ippolito's "spelunkers-go-splat" outing, Alien 2: On Earth), a money-man wisely switched the film's handle to Contamination during pre-production. Budgeted at about $225,000 U.S. with a shooting schedule of five weeks (including location footage in New York and Columbia and interiors at De Paolis Studios in Rome), Cozzi's outing was a total bomb during its Italian theatrical run. Regardless, Menahem Golan's Cannon Releasing Corporation acquired the film for Stateside distribution in 1981. Reworked to delete some explicit gore for an "R" rating and retitled Alien Contamination, it was this compromised edition that was later issued on VHS by Paragon Video. A more complete option was made available in Canada with Lettuce Entertain You's Toxic Spawn release (issued as a cheapy EP-speed tape domestically by Saturn Productions), which was essentially an unauthorized bootleg of the British pre-cert VIP release (which itself was banned as part of the "Video Nasties" upheaval). Unfortunately, while the gore scenes were finally intact the print itself looked dupey and detail was horrendously difficult to make out - 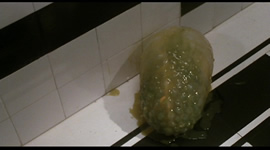 not to mention that two dialogue scenes were chopped to eliminate a romantic subplot. A better alternative was to import the complete Japanese Nikkatsu VHS, but after the letterboxed opening credits this version reverted to a cropped, panned and scanned presentation! What's a fan to do? Eventually Contamination made its DVD debut in Germany, released by CMV Laser Vision as Astaron - Brut des Schrekens (Astaron - Brood of the Frights?) and later issued again under this title by Marketing Film, but the lack of an English language track on either disc really hampered their value. Thankfully, Blue Underground once again comes to the rescue and their U.S. DVD release is easily the last word on the subject. Restoring the film from its original negative elements, I'm hard pressed to find a single flaw with their 1.85:1 transfer. The picture is sharper than ever imagined with dead-on colors and there's no damage or technical flaws in sight. Those accustomed to seeing the film's previous incarnations will revel in newly uncovered details, especially during the opening venture through the ship's hull and the basement-bound climax, both of which previously played out in blurry darkness. For once you can actually see the "Alien Cyclops!" Not to be outdone on the audio front, Blue Underground pulled out all the stops and included a DTS-ES 6.1 track. The dialogue remains clear and centered throughout, with most of the directional effects being used for various gunshots, car movement, ambient background noise, etc. As could be expected, the Goblin score is appropriately cranked up and really shakes the foundation when necessary. Other listening options include an EX 5.1 mix, a 2.0 stereo track and the original mono for you purists out there. 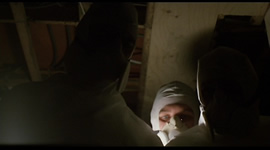 In case the amazing remastering of the main attraction wasn't enough, Blue Underground has loaded their DVD with supplements. First up is a well-made 17 ½-minute interview featurette with director Luigi Cozzi in which he laments about changes imposed by the producers, comments on casting choices and generally reveals quite a bit about the production. Second is a real curio - a 23-minute behind-the-scenes documentary assembled during the shooting. Filmed on what appears to be either Super8 or 16mm, this makes a nice companion piece to the newer chat and showcases Cozzi directing the actors along with several special effects sequences. Next up is a European theatrical trailer, which almost serves as a sort of music video for Goblin's "Connexion" track. It's well worth checking out, but watch the film first. (Humorously enough, when I saw Claudio Simonetti's new band, Daemonia, perform live a few years back I kept drunkenly shouting, "Connexion!" between songs in hopes that they would play it. Little did I realize when Contamination's soundtrack was written Claudio was no longer in the band! Me and my intoxicated faux pas - not the first and certainly not the last.) We're then given two separate stills galleries. The first is a 66-item presentation of lobby cards, posters and box art mixed with many on-set photographs from the director's personal files, while the second is a 25-image collection of original concept art. Wrapping things up, for those with DVD-ROM capabilities there's a 54-page graphic novel adaptation translated into English for the very first time. This B+W comic (which originally appeared as an insert to an Italian magazine) reinstates several small bits that were nixed from the finished film, including a brief prologue and some nudity. All in all, Blue Underground's Contamination is a phenomenal DVD release that receives my highest possible recommendation.

Jonesin' for some Goblin tunes? Get your fix at La Fantastica Home Page Dei Goblin!

Think aliens are really walking among us? Keep up to date on all the latest UFO gossip at the UFO / Aliens Homepage!