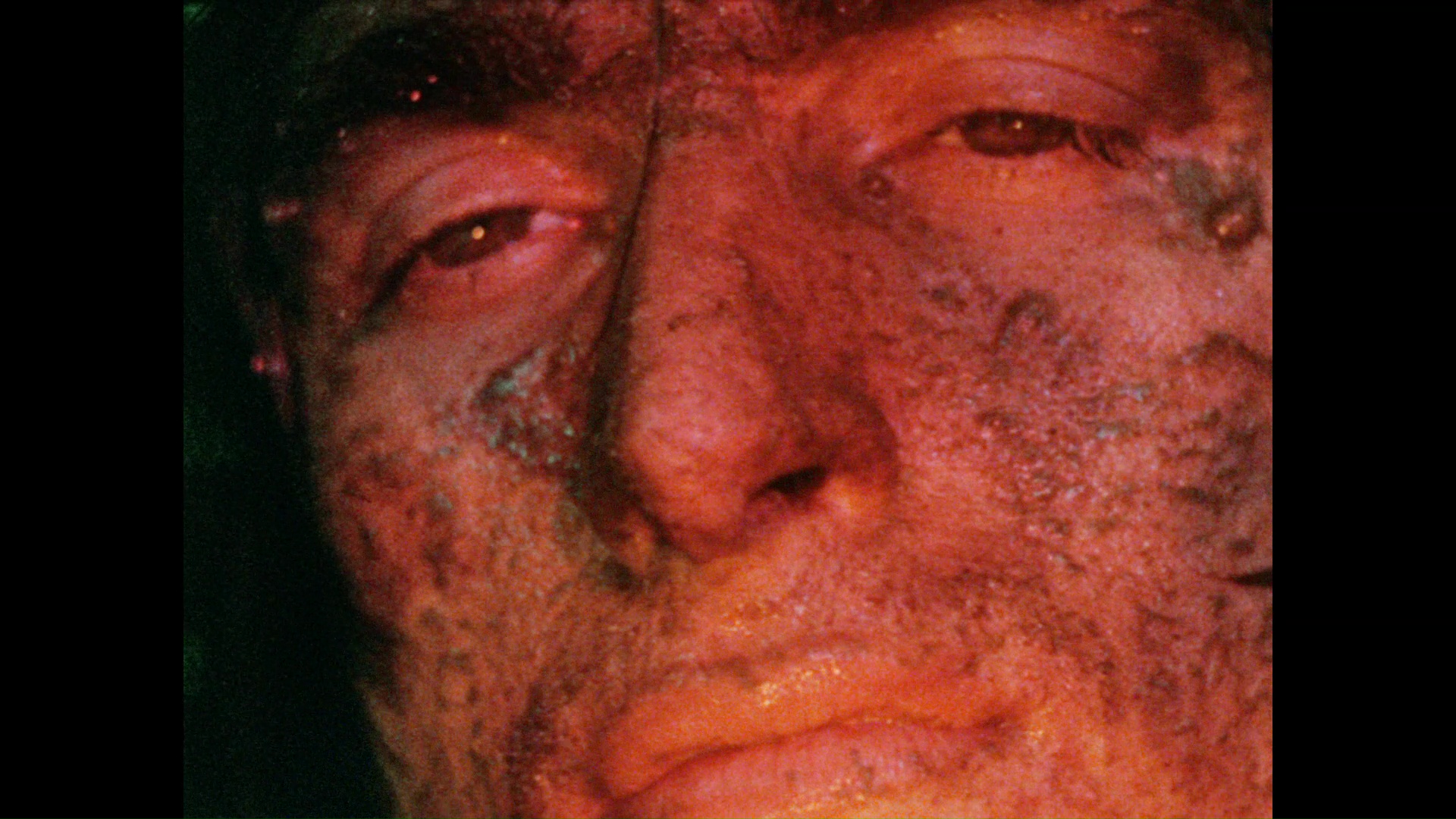 over three decades after its under-the-radar 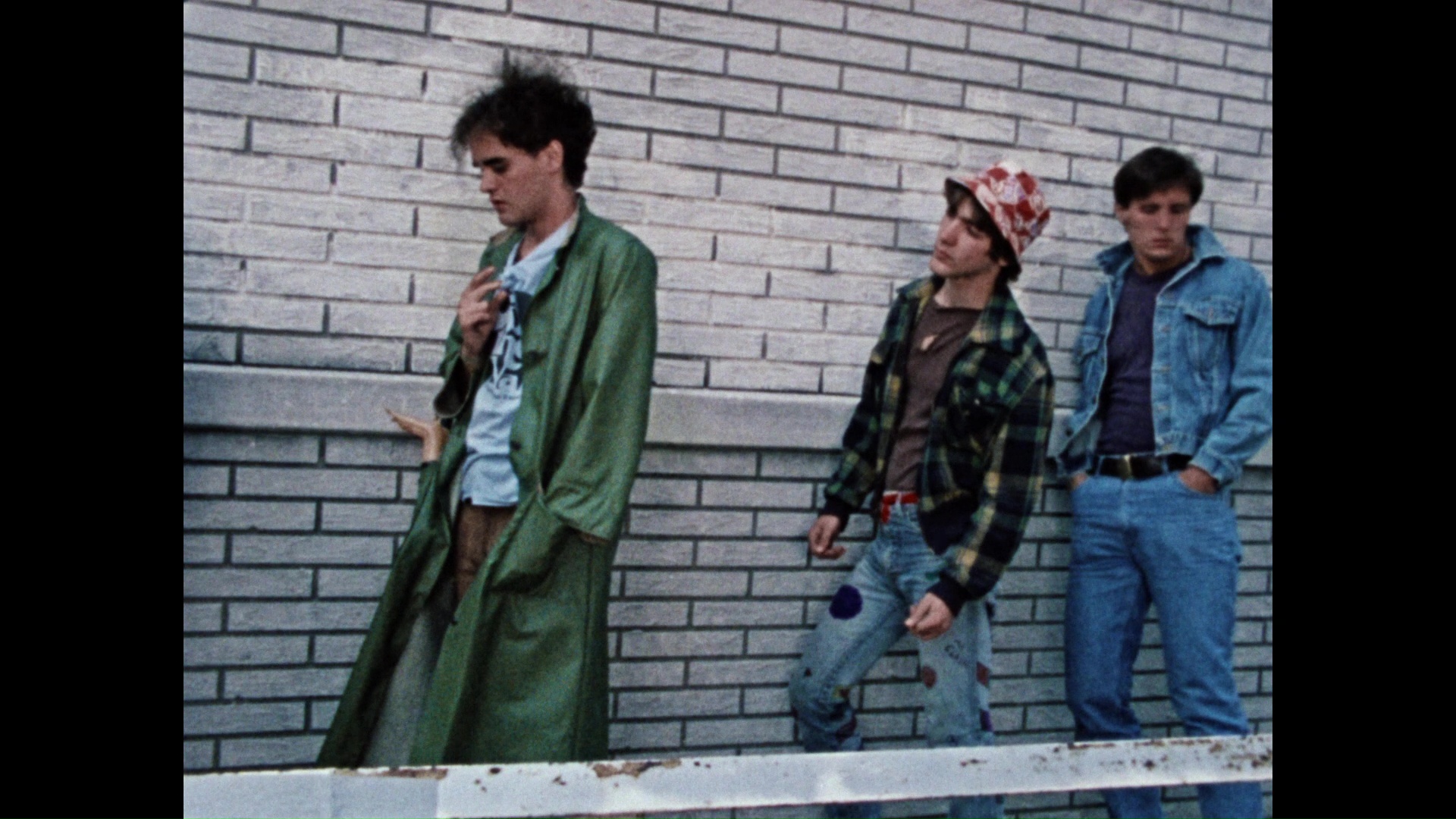 release, this scrappy, almost unbearably bleak study of post-traumatic urban torment continues to chafe, shock, and amaze viewers looking to see exactly what was pouring out onto theatrical screens before the big studios got a stranglehold on every screen in America. Contrary to the title and the cover art which depict a Rambo-style Vietnam bloodbath, Combat Shock is completely unlike any other film released by Troma and should surprise folks accustomed to goofs like Troma's War and Surf Nazis Must Die. While Combat Shock has amassed a decent cult following over the years, it has also drawn a lot of fire for its misleading advertising (try imagining the face of a Steven Seagal fan who rented this hoping for a little mindless gunplay). A down-in-the-dirt, thoroughly depressing and uncompromising work, Combat Shock demands that its audience accept the film on its own terms, though whether each individual viewer is willing to go along for the ride is completely a matter of personal taste. Love it or hate it, there's no denying that this bitter little pill has far more on its mind than the entire Toxic Avenger series put together.

Described by director Giovinazzo as a cross between Eraserhead and Taxi Driver, the film follows a few sordid days in the life of Frankie (Buddy's brother Rick, who also did the unsettling electronic score). A traumatized Vietnam vet now saddled with the pangs of poverty in New York City, Frankie tries to cope with the burdens of his pregnant wife, who sits around watching static on TV all day, and his newborn baby, mutated by the aftereffects of Agent Orange into something resembling a smushed gray Muppet. Drug dealers, underage hookers, and junkies fill the daily scene of Frankie's life, and his increasingly disturbing flashbacks to Vietnam continuously set him on edge and drive him to the brink of a nervous breakdown. Bloodshed erupts, of course, but anyone expecting the gung-ho cathartic vigilantism of Rambo is going to be in for a nasty surprise. 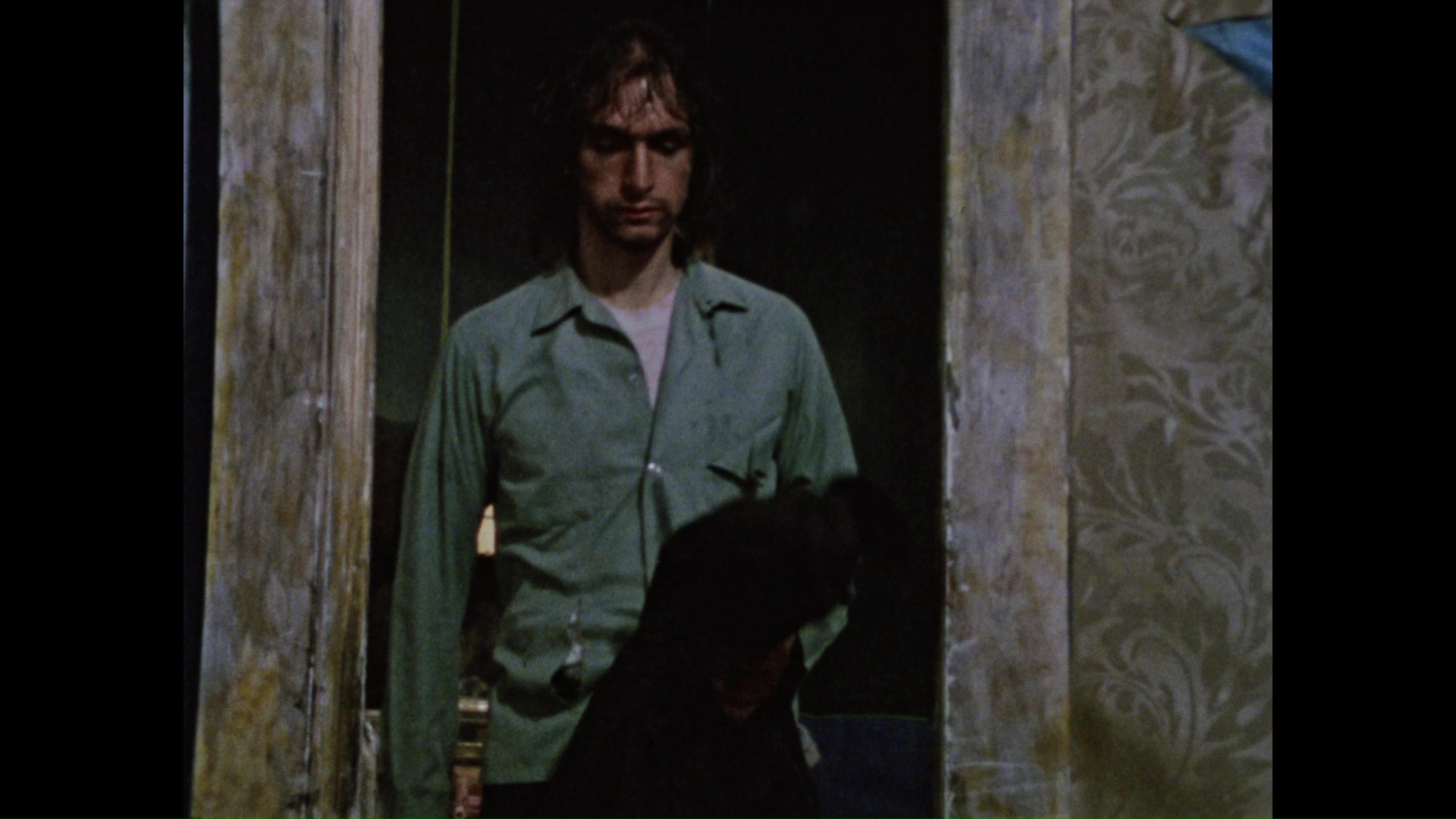 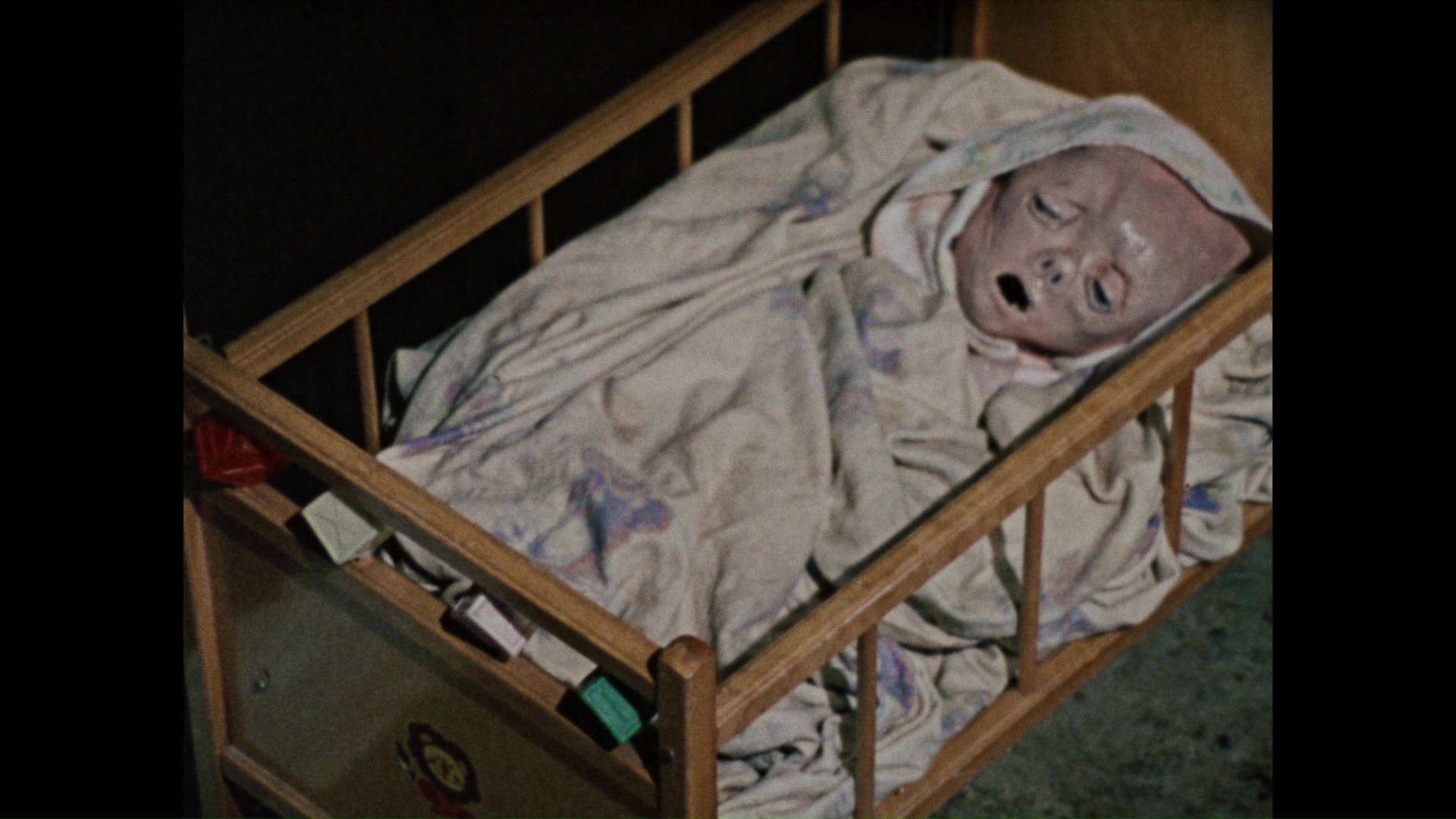 Originally shown on the festival circuit under the title American Nightmares, this film fell afoul of the MPAA who, not surprisingly, objected to the very graphic violence (which is justified by the plot but certainly hard to take). Rumors immediately spread through the horror fan networks about explicit footage cut from the film on a scale that rivaled Last House on the Left, particularly surrounding the infamous "baking" scene at the end. An R-rated version screened in theaters and released on VHS by Prism was certainly strong enough, while gray market dealers swapped around other variants claiming to be complete but usually falling short. Troma later reissued two more versions themselves, one on VHS and another at the beginning of the DVD era, which created even more confusion by presenting an additional alternate version that subtracted and altered scenes for no discernible reason.

Troma's initial DVD of Combat Shock sported a truly killer extra, an audio commentary track by Buddy Giovinazzo (who makes for surprisingly warm and entertaining company along this rough road) as he offers numerous funny anecdotes about the film, especially his efforts to make Staten Island look like Vietnam. He also discusses its bizarre production and censorship history as well as his little visual fimmaking tricks (like the great idea of projecting the Vietnam flashbacks onto Rick's face). Giovinazzo is joined by notorious German director Jorg Buttgereit (Nekromantik, Der Todesking), obviously a big fan of the film and provider of some often hilarious observations in his familiar accent ("Ya, I vas vondering aboot dat, all de blood..."). That modest release 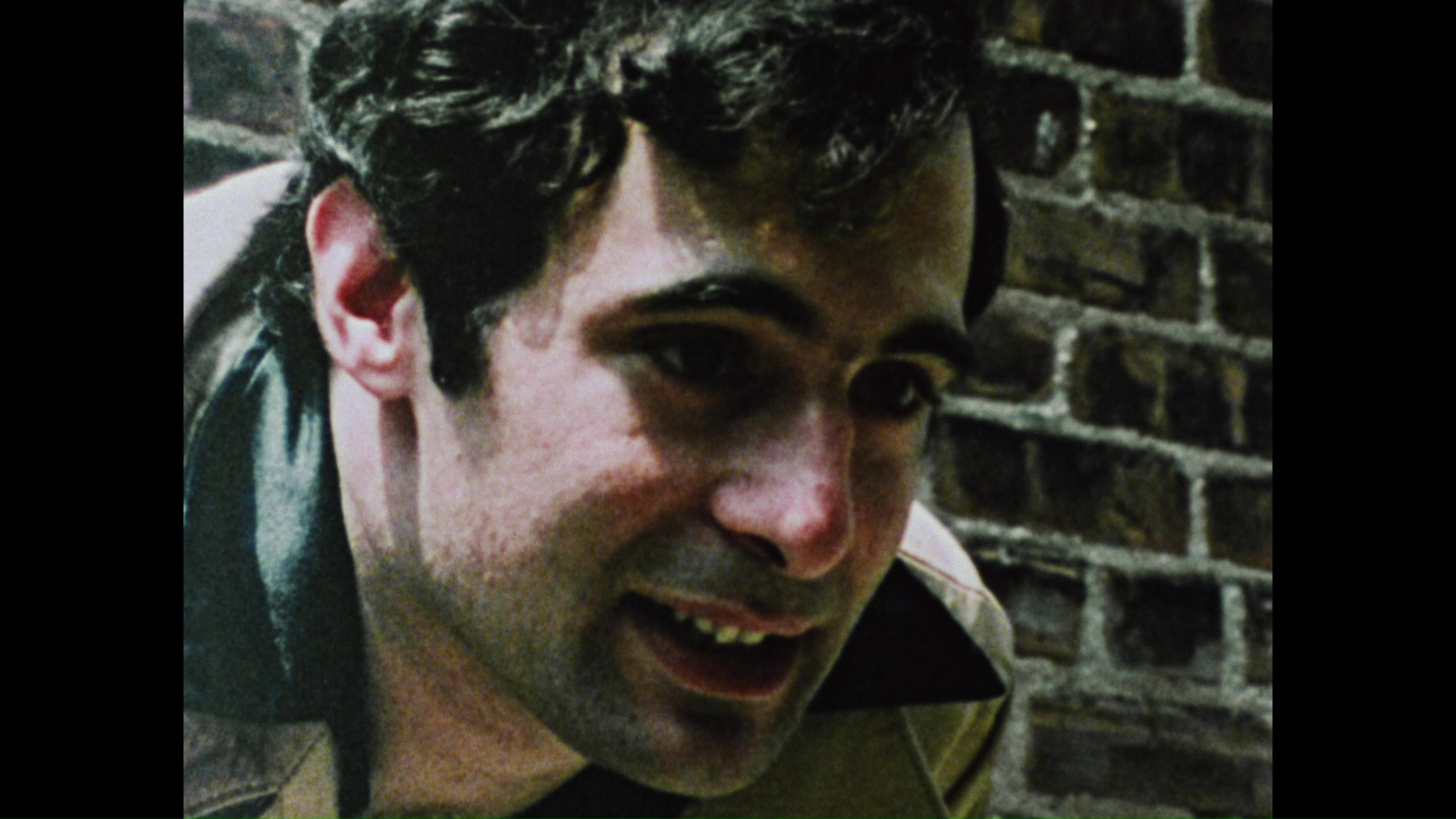 was later eclipsed by Troma's two-disc "Tromasterpiece" edition; along with carrying over the commentary, it features the 91-minute R-rated theatrical cut and, 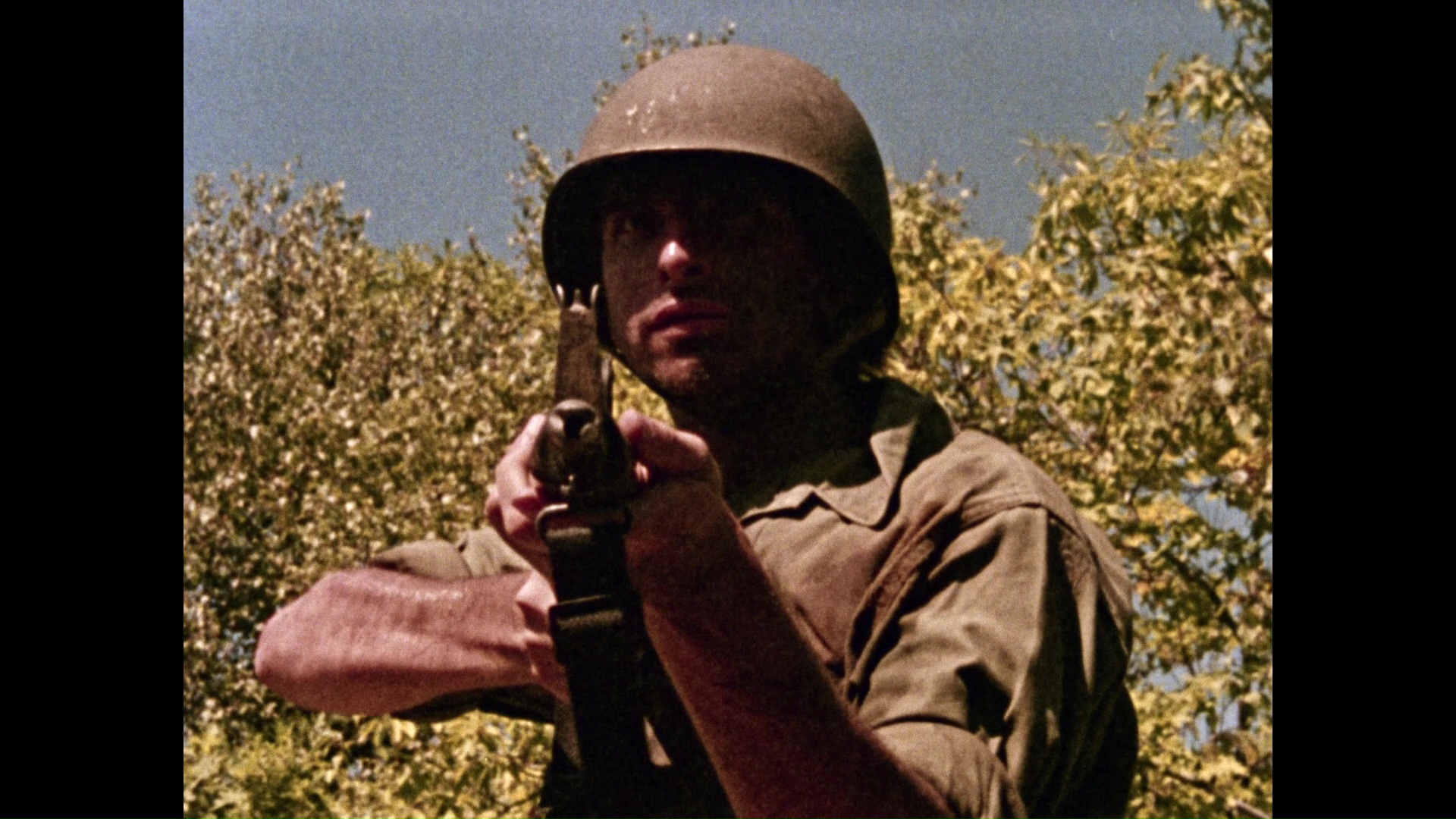 best of all, the much longer 96-minute American Nightmares version, transferred straight off the 16mm answer print shown to drum up distributor interest before Troma snapped it up. The former looks a tad better (relatively speaking, given the grubby shooting conditions) but both are fine and accurate representations of the source, while most fans will probably opt for the longer cut (complete with some extra oozing footage during the aforementioned baking finale). Some of the edits have nothing to do with violent content and were probably made for time, but the extra bits do add some nice character shading and make more sense overall.

Disc two contains the lion's share of special features including a horde of additional Giovinazzo short films and music videos: "Mr. Robbie" (the infamous short film that capped off Joe Spinell's career), "Jonathan of the Night" (a brief and bloody tale about a confused vampire), "The Lobotomy" (about a compulsive masturbator who gets some radical treatment in an asylum), "Christmas Album" (a 1981 dry run for Combat Shock about a Christmas morning that goes horribly wrong), "Subconscious Realities" (a delirious 15-minute short about a bored daydreamer having visions of Nazi punishment and much more), and three gritty music videos for Circus 2000 A.D. ("Leave This World," "Planet T.T.," and "Something in the Water"). However, you get much more than that; the biggest new extra is "Post Traumatic: An American Nightmare" (29m13s), an appraisal of the 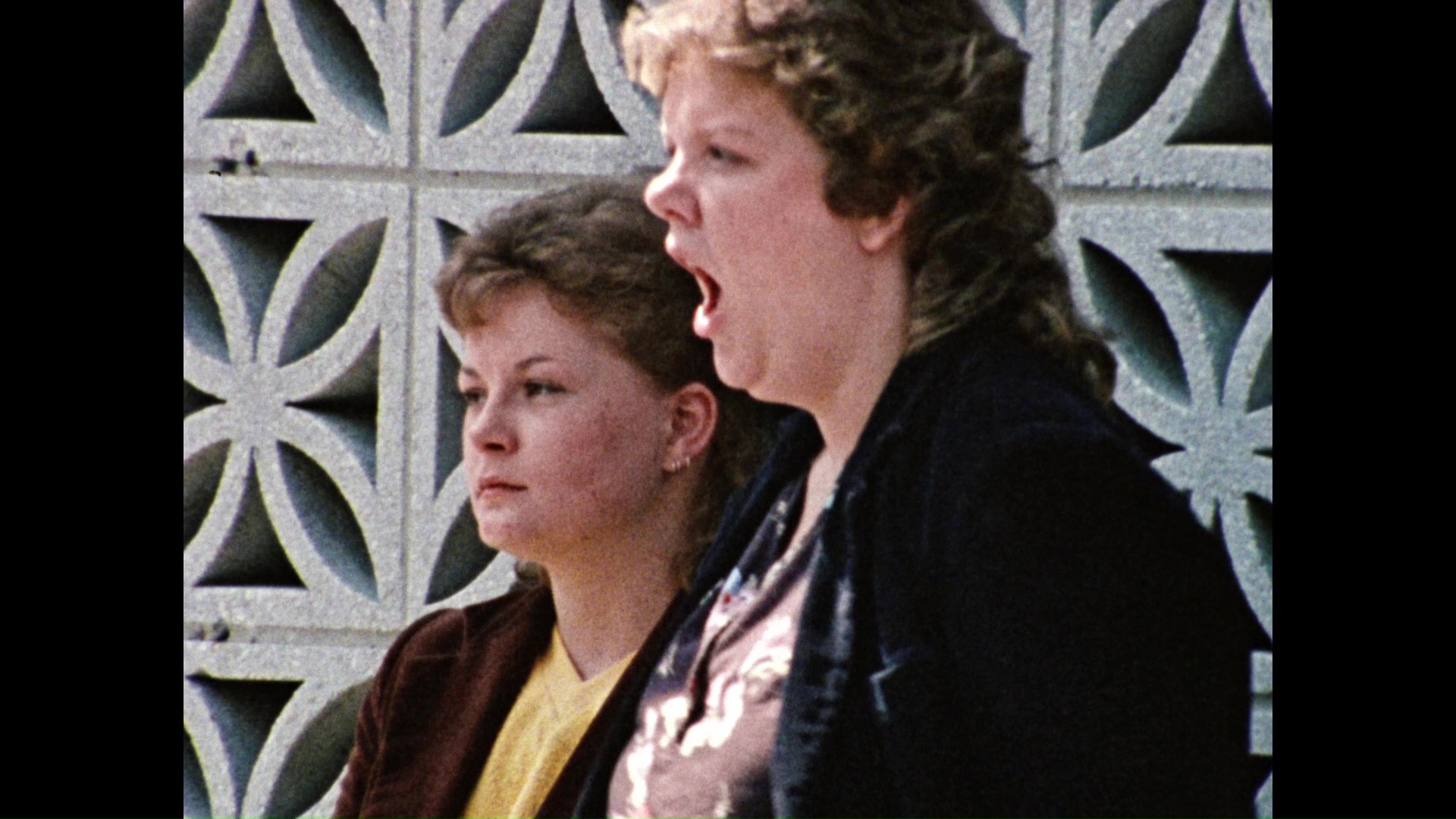 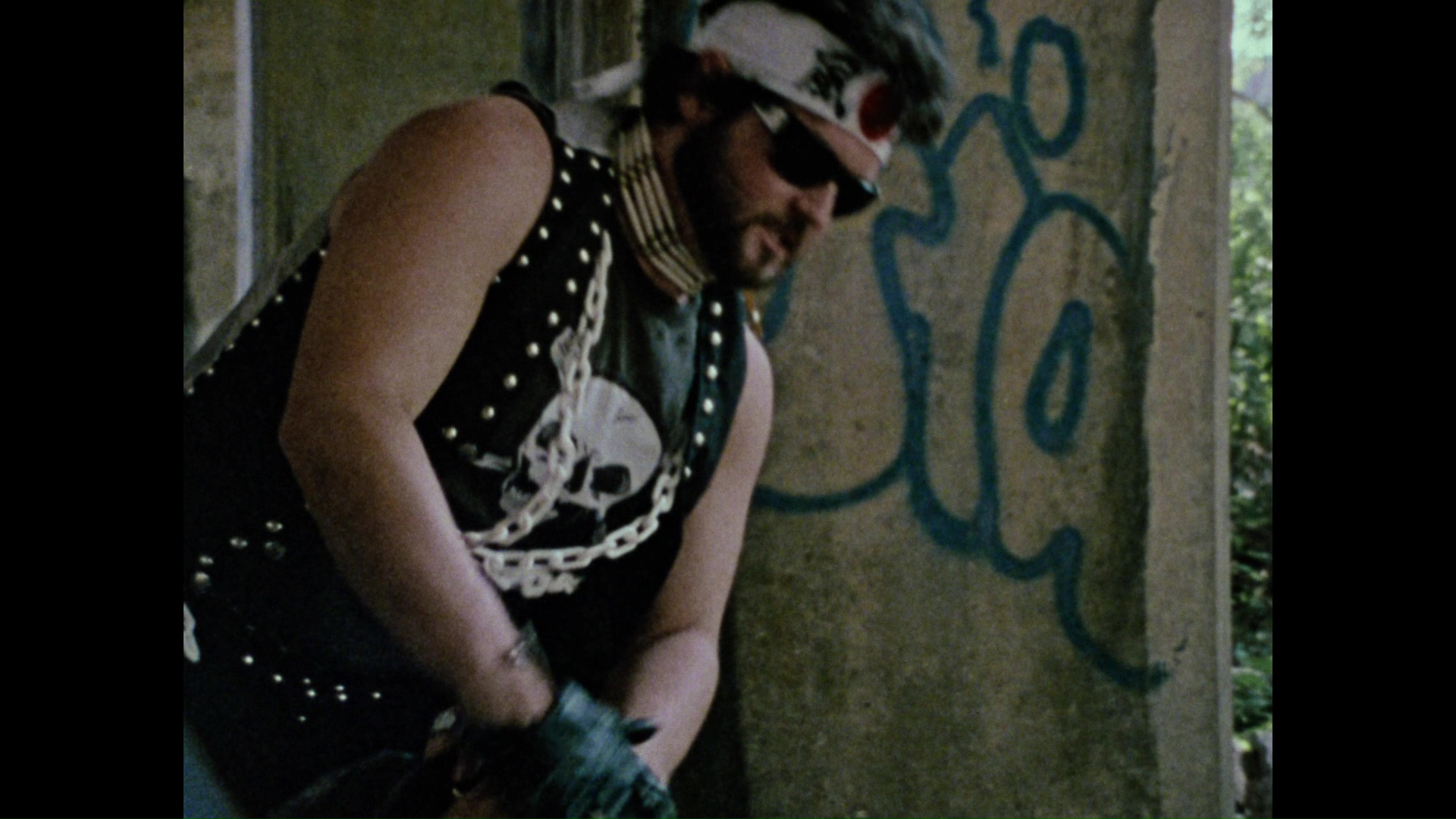 Fantasia's Mitch Davis, Severin's David Gregory, Justin Stanley, The Gore Gazette's Rick Sullivan, and Joe Kane. Most of the early section deals with the film's heavy championing in Chas. Balun's pivotal issue of Deep Red, followed by memories about its release, first-time viewing experiences, and notes about how it reflected indie and New York filmmaking at the time. Next up is a quick new four-minute video interview with Buddy Giovinazzo about the motivations and inspirations behind the film, while his brother (now sporting a goatee) appears for six minutes in "Unscarred" to reflect on his starring role and his memories of making the film. "Der Combat" features some jovial footage of the director being interviewed by Troma's Lloyd Kaufman at the 2006 Tromanale in Berlin, followed by some (very difficult to hear) 2009 footage (7m40s) of a conversation between Buttgereit and Giovinazzo at the 2009 Berlin Film Festival. "Hellscapes" (2m43s) is a quick montage of then-and-now shots of filming locations, capped off with the hilariously misleading original theatrical trailer, a new "Tromasterpiece" promo that sells the release far more honestly, and bonus Troma trailers for special editions like The Last Horror Film, Mad Dog Morgan, Story of a Junkie, Troma's War and Blood, Boobs and Beast. Thankfully the grim cover art is also more appropriate than the prior DVD, and the sleeve also comes in a see-through case with liner notes by Shock Cinema's Steve Puchalski covering the basics of the film's release and history.

If it sounds like that release was the final word on the subject... well, it wasn't. In 2018, Severin Films issued a limited 2,000-unit Blu-ray edition featuring a vastly superior new scan of the film (using a 4K scan of the 35mm internegative and 2K inserts from Buddy's personal 16mm answer print), with remastered English DTS-HD MA 2.0 audio from the mag tracks with much more presence than before. It's not a "pretty" film in any conventional way, of course, but this is likely as good as it's ever going to get. This is also the complete American Nightmares cut, with that title card intact.

You want extras? Here you go... An audio commentary with the two Giovinazzos and special makeup effects artist Ed Varuolo goes through pretty much every imaginable production facet including more about the swamp scouting in Staten Island, the pros and cons of shooting in 16mm, the wrangling of dead bodies, the audience response and fan championing through Deep Red magazine, 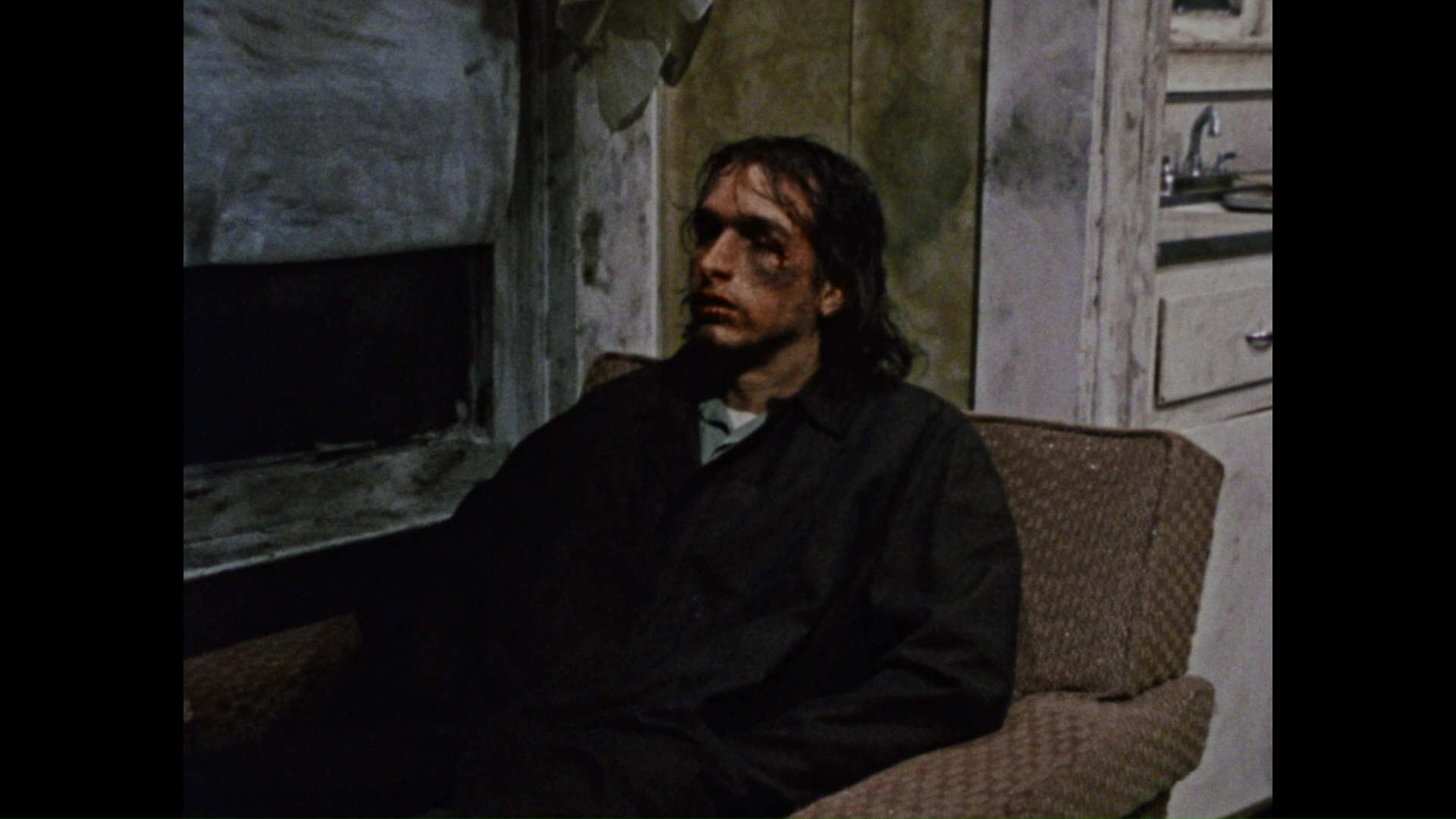 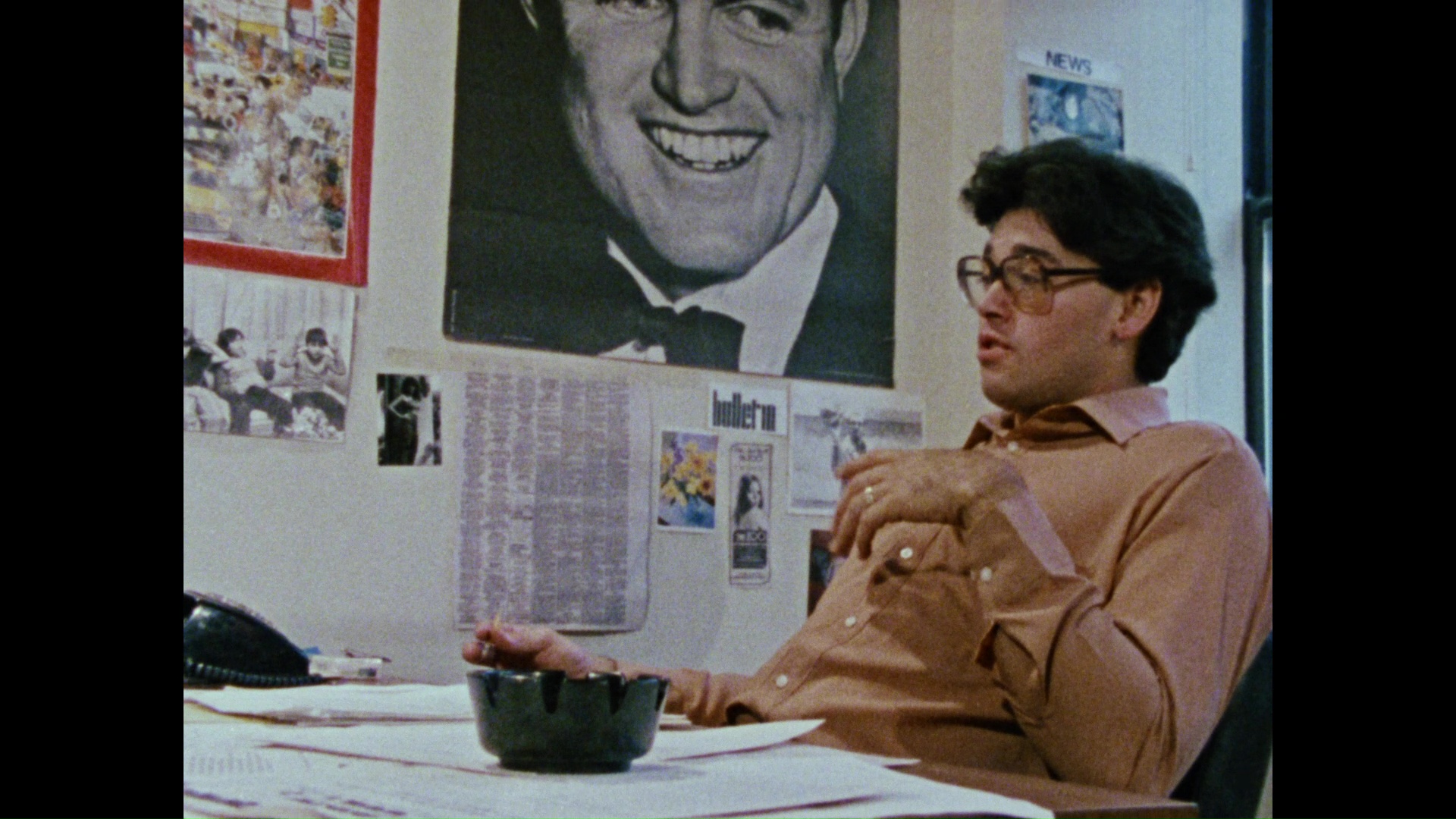 city locations that often necessitated some impromptu dolly tracks. It's quite funny and a nice contrast to the relentlessly grim nature of the film itself. "The Brothers G" (27m10s) is a new Interview with Buddy and Rick, taking a more general look at their collaborations, Rick's composing of the score, and Buddy's fondness for horror movies. Varulo returns (in the back of his comic book shop) for "Nightmare Effects" (17m18s) with an examination of the creation of budget-conscious gore along with three other people, though he's way more enthused talking about the film's reception on 42nd Street and the changes made to get the film an R rating (with some of the cut bits ending up in the trailer instead). Director of photography Stella Varveris appears in "Combat Shots" (5m12s) for a brief account of how she knew Buddy from school and worked nearby, which made her ideal to shoot the film, while "Playing Paco" (8m15s) with actor Mitch Maglio covers his casting at a comic book shop and the creation of his bully drug dealer character. More acting tales turn up in "Mike the Junkie Memories" (5m47s) with actor Michael Tierno noting his admiration for the film's vision and his apprehension about doing the graphic, prosthetic shooting-up scene. The man most responsible for building the film's reputation among the horror fanzine arena, artist and critic Stephen Bissette, appears in "American Deep Red" (13m24s) to explain how he discovered the film during a VHS movie binge and championed it with his watershed artilce, "The Combat Shock Treatment," which led to a real-life rapport with Buddy. The European critical side is covered in "Shock Xpression" (11m15s) with journalist Alan Jones, who touches on the film's coverage in Shock Xpress and his shock at discovering an honestly good Troma film.

The disc also features outtakes and tests (14m25s), the DVD's "Post Traumatic," "Hellscapes," and Giovinazzo and Buttgereit featurettes, and the theatrical trailer. Then there's the short films: "Mr. Robbie: Maniac II" (a new 2K scan) featuring commentary by the Giovinazzos and outtakes, "Jonathan of the Night," "The Lobotomy" (16mm and 8mm versions), "A Christmas Album," the "Leave This World" music video, and the 8mm shorts, "More Than a Mouthful," "Paranoiac," and "Maniac Drummer." The limited edition also includes the first-ever soundtrack release on a bonus CD, the pretty incredible 96-page American Nightmares Scrapbook (featuring the shooting script, director's diary, and set photos and storyboards), actual frames from the director's workprint, and a numbered slipcover autographed by Buddy Giovinazzo. A spectacular release and a fitting tribute to the best film Troma ever released. 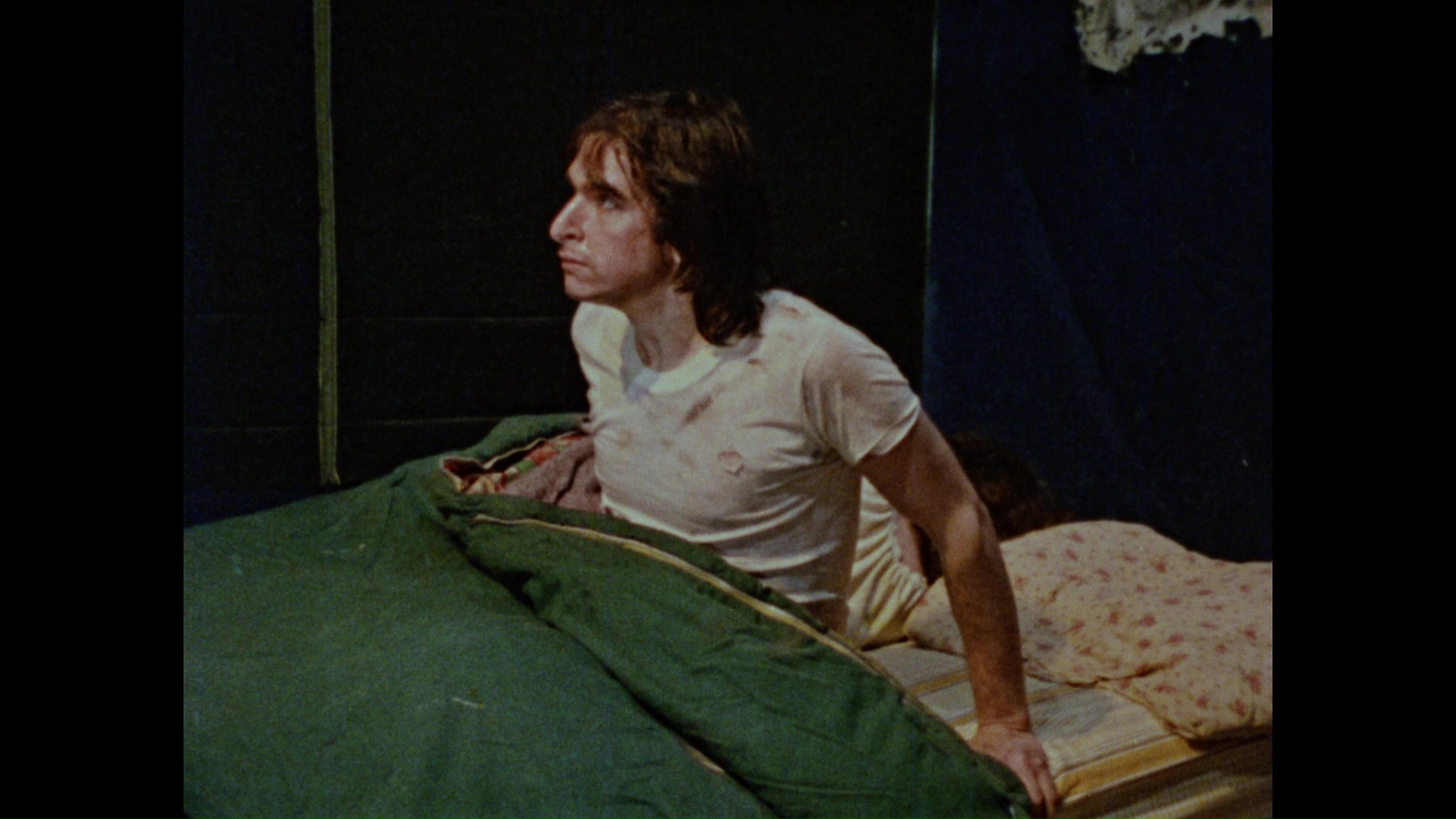 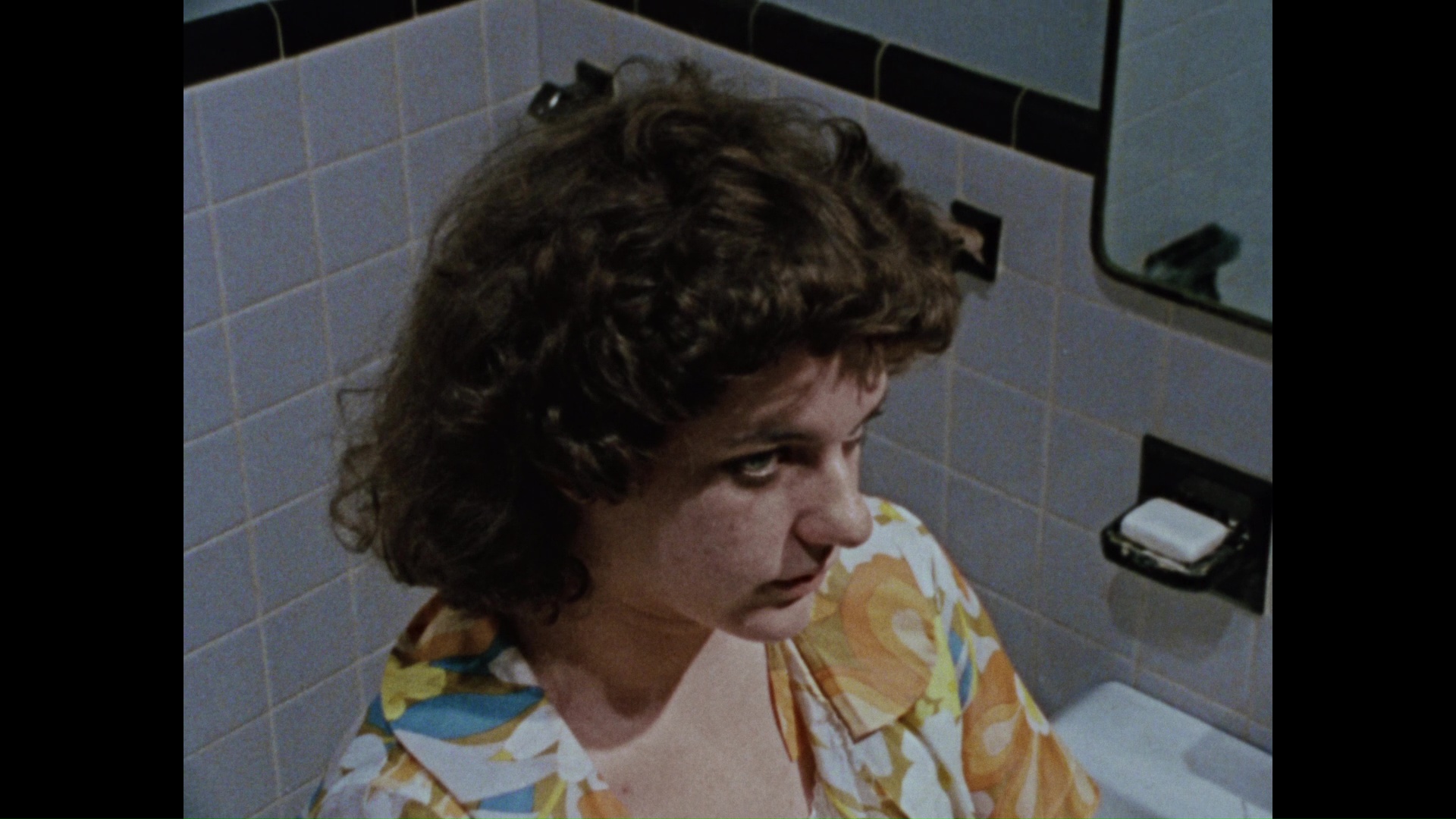 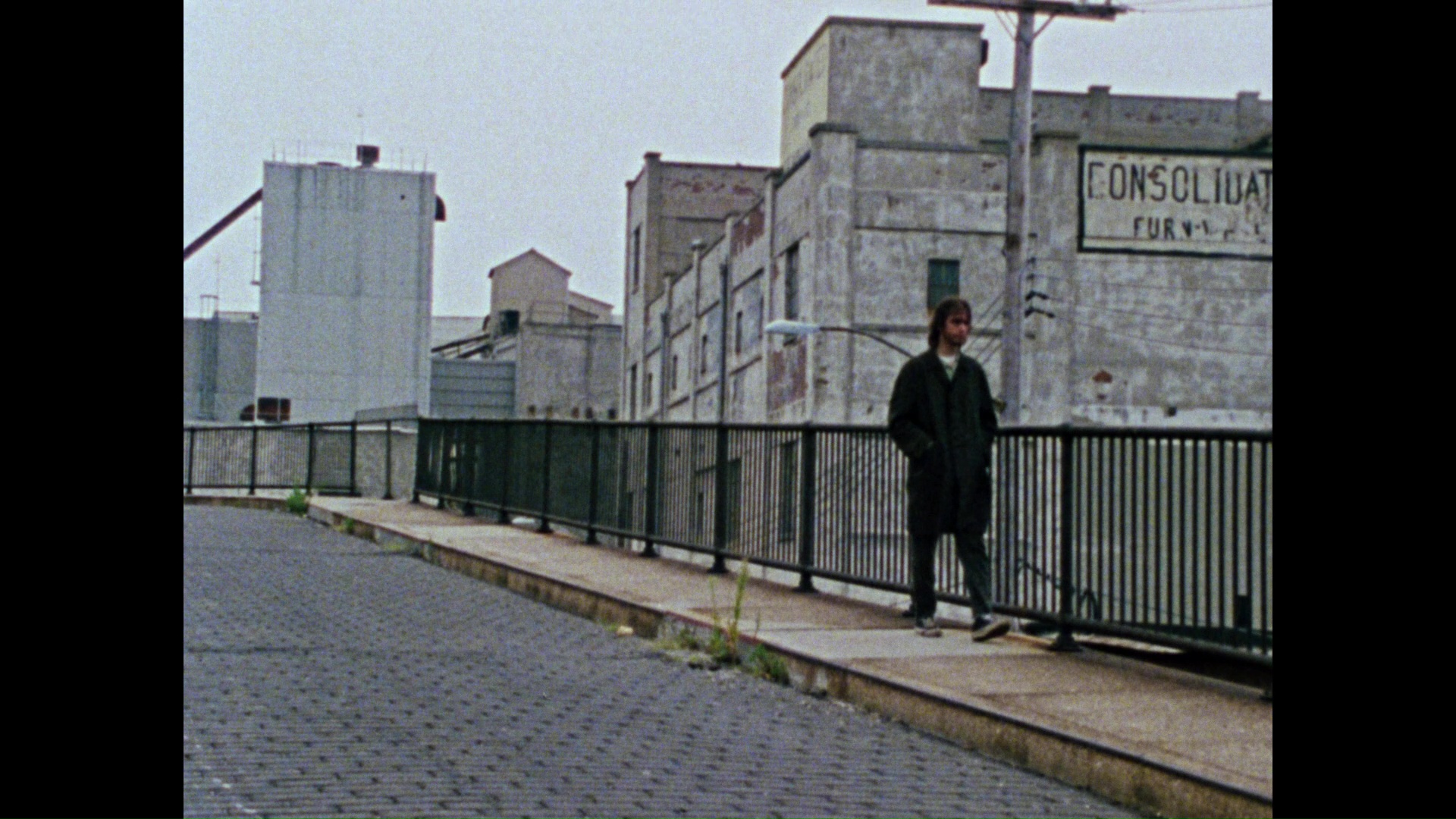 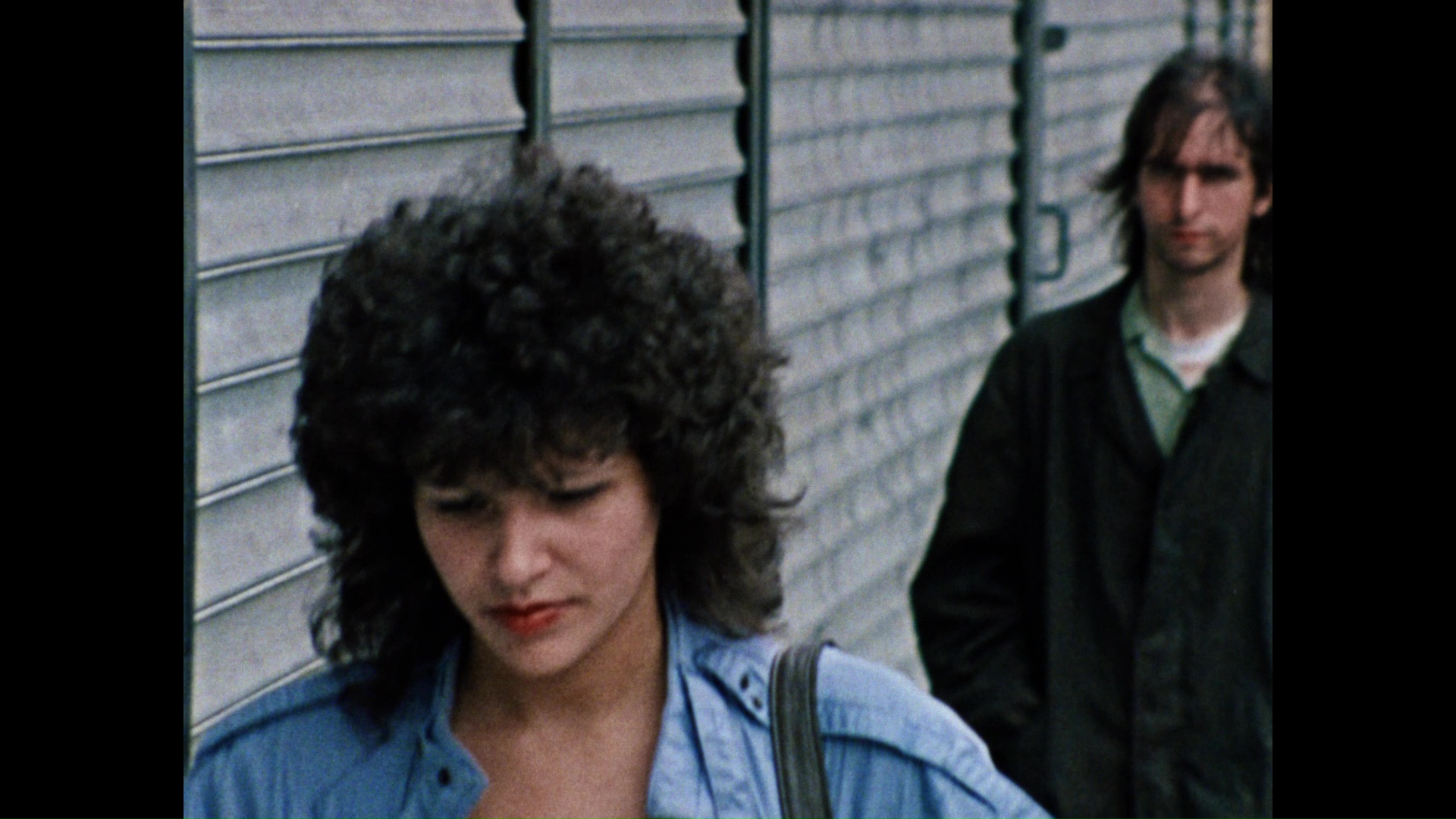 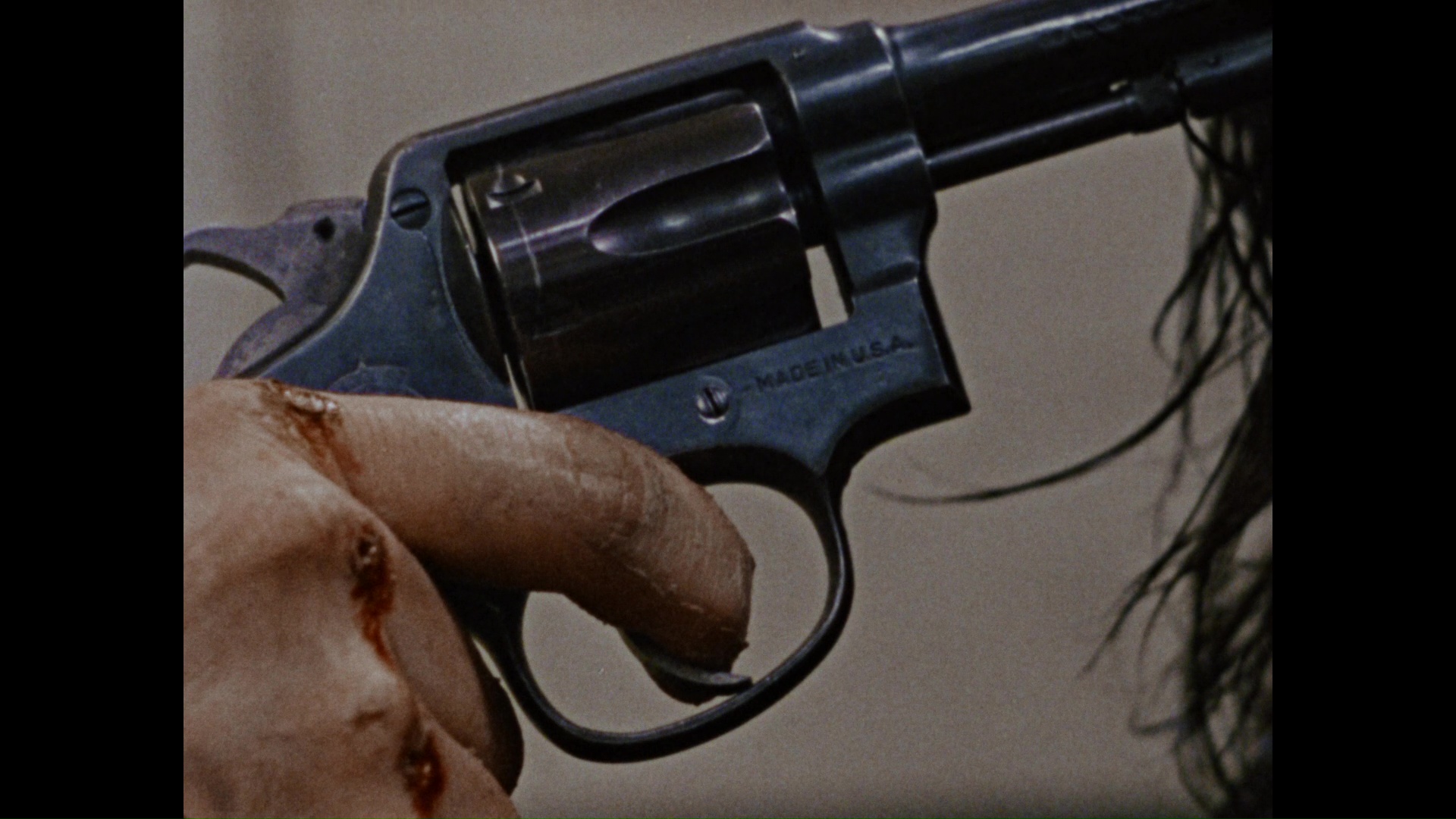 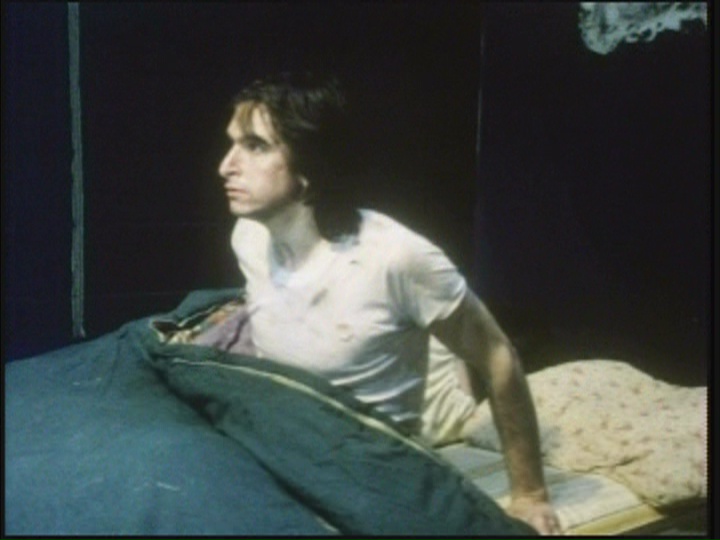 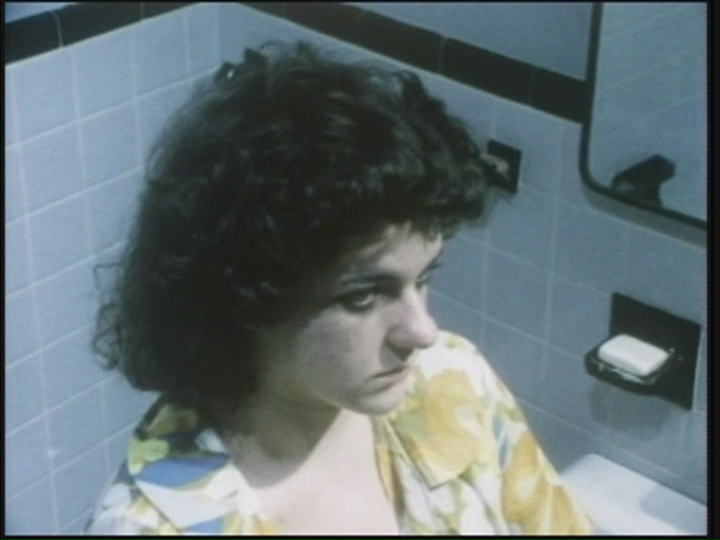 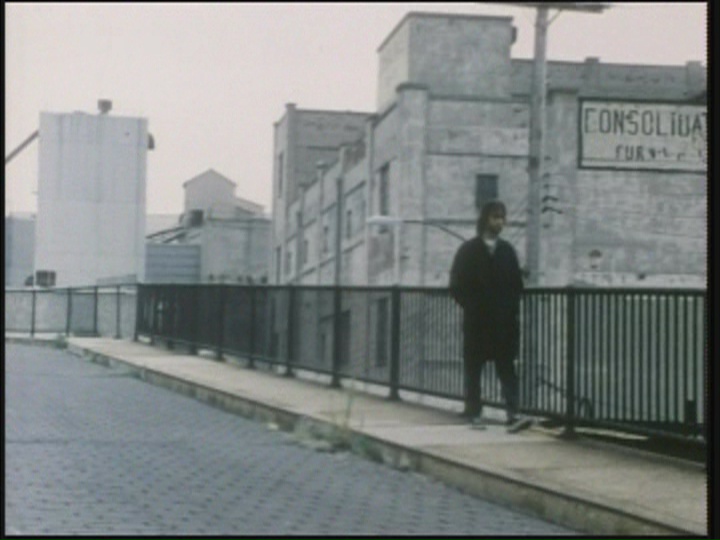 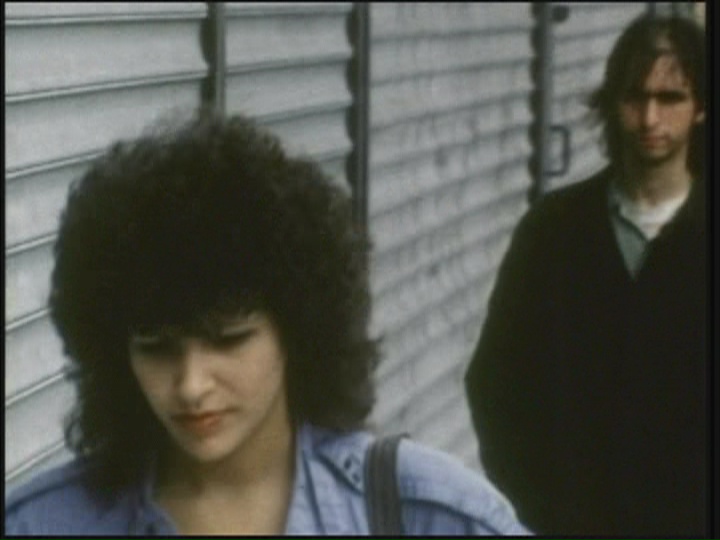 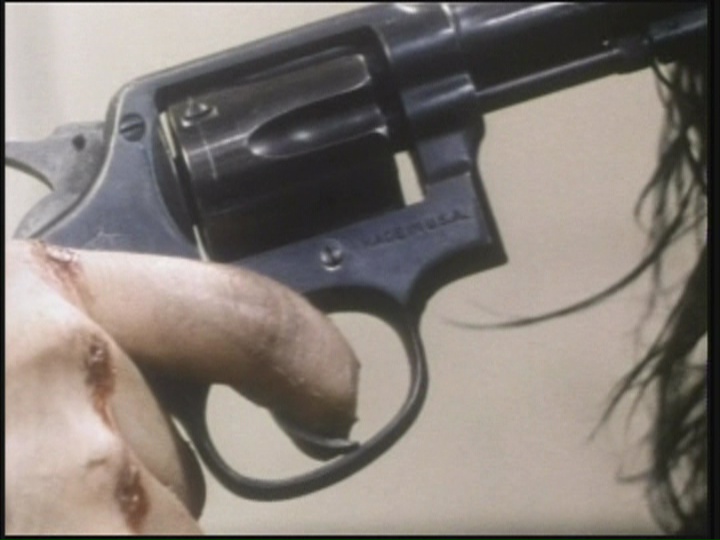 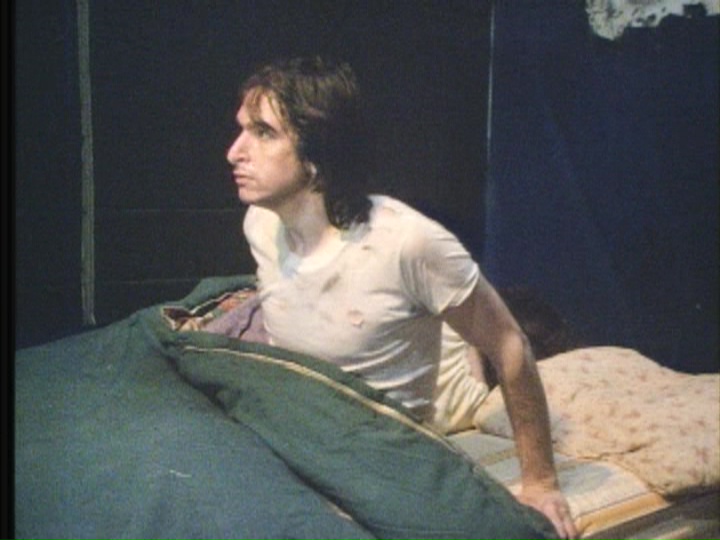 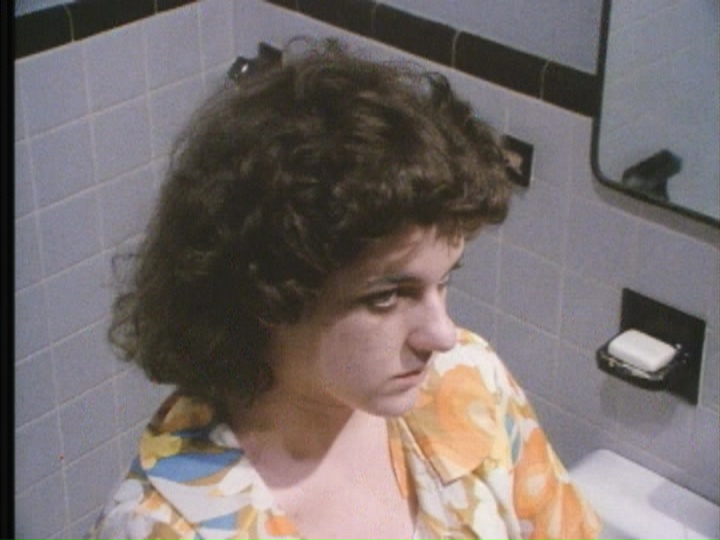 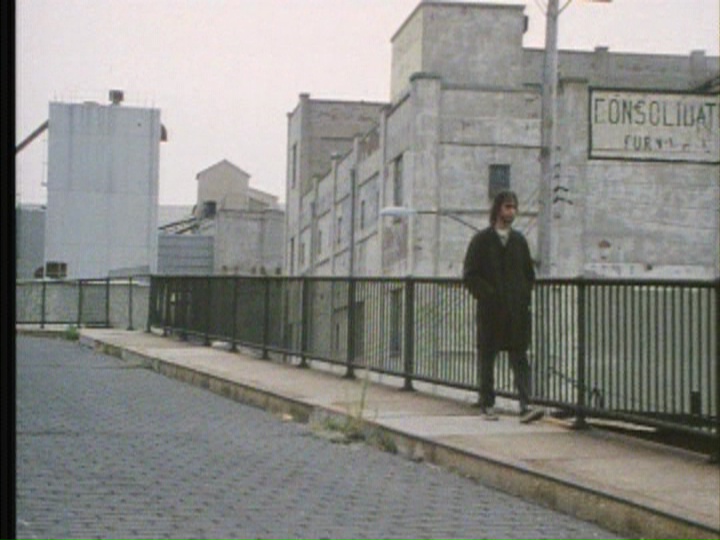 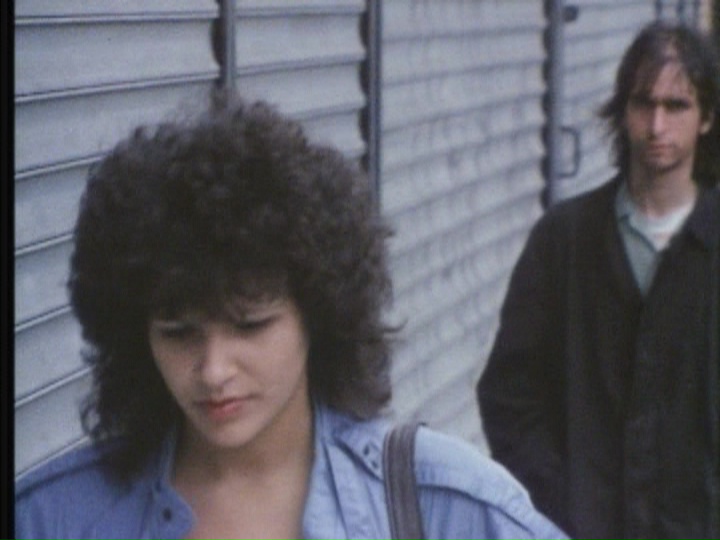 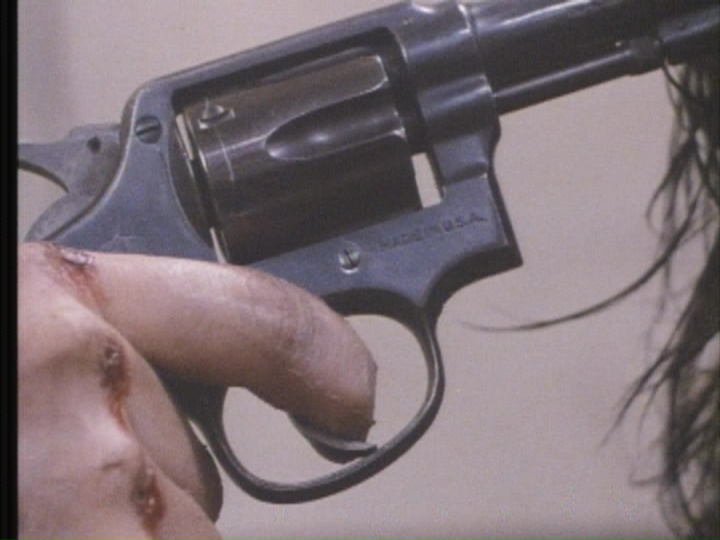