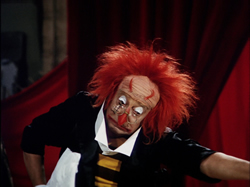 "Minor" seems to be a word that gets tossed around a lot when discussing The Clowns (or I Clowns, as it's billed in Italian on the DVD cover). Made by the great Federico Fellini as a sort of cinematic apéritif after the wild directorial binge of Satyricon, this was originally crafted as Fellini's first project for television 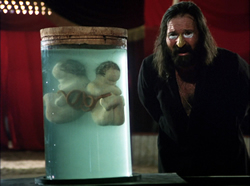 but was far more widely seen in theaters worldwide after its Italian TV debut. Not surprisingly, this is hardly a straight documentary about clowns; instead, Fellini uses the opportunity to craft a love letter to circus life with himself and his "crew" (mainly composed of actors separate from the actual crew) integrated into the journey of exploring the roving lives of clowns from Italy to Paris. The film opens with a semi-autobiographical sequence in which a small child watching the construction of a circus tent through his bedroom window and being alarmed by the clowns, which seem like otherworldly and fantastic creatures. That attitude continues throughout the film as we meet a succession of circus performers, with distinctions among the types of clowns becoming important as they perform their routines both in front of a crowd and behind the scenes. A few celebrities make surprise appearances as well, most memorably with Anita Ekberg (Fellini's muse from La Dolce Vita and Boccaccio '70) popping up to collect a most unusual cat. Fellini even becomes part of the pratfalls at certain points, which isn't that surprising considering he had actually worked as a clown in his youth. 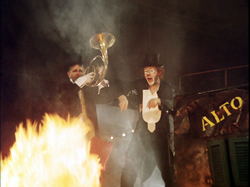 Despite its high pedigree (including participation from the usual Fellini regulars like composer Nino Rota and cinematographer Dario Di Palma), The Clowns has been treated very poorly throughout most of the home video era. A really dreary-looking VHS version from Cinematheque back in the '80s was the standard for years and got recycled as an even worse bootleg DVD from Synergy, but eventually a full-fledged restoration was commissioned in Italy and first appeared on French DVD (but without any 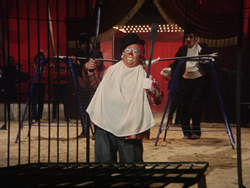 English-friendly options). In essence, that meant the American DVD, the first out of the gate from Italian company Raro (a name well known to many Eurosleaze fans), became the only reasonable English-subtitled version out there in standard def. The transfer isn't 100% perfect, showing its age at times and betraying evidence of artificial sharpening. The original open matte (1.33:1) compositions are kept intact here, which is fine; Fellini's films were composed in every aspect ratio imaginable over the years, and his affinity for composing in a traditional square frame obviously hadn't been lost with his occasional dabblings in scope.

Extras here seem fairly light given the scholarly treatment heaped on a few other Fellini titles, but what's here is actually quite rewarding. A "Fellini short film" is included, "Un agenzia matrimoniale," which is actually his segment from the 1953 neorealist anthology, L'amore in città . Clocking in at 16 minutes, it's an innocuous but entertaining vignette that starts strongly but meanders a bit; it's easy to see how much Fellini's grasp of cinema progressed even a year or two later. Much more substantial is the 42-minute "Fellini's Circus," a visual piece with Adriano Apra explaining circus culture, its role in Fellini's previous films, and the various personalities drifting about in front of the camera. The package also includes an illustrated 50-page booklet with photos (including the iconic photo shoot of the director getting into clown makeup) and Fellini illustrations as well as some nice liner notes, including many text observations from Fellini about television, the genesis of the project, and his own personal feelings about clowns and the inevitability of mounting an entire project about them. Most significantly, this release brings back into circulation one of his most obscure films, which has been largely forgotten in North America. Perhaps only Casanova (which has been buried by Fox, but at least it's on Blu-Ray in France) and the still-unreleased Voice of the Moon (his last film, sadly enough) are more anonymous in the States, but hopefully this will mark a change for some his "minor" but very worthwhile projects.

Appropriately, The Clowns also became Raro's first Blu-Ray title out of the gate several months after the DVD, and one could understandably question how much of a quality bump could actually be expected for a mostly neglected '70s Italian TV title. Shockingly, the new HD transfer on the Blu-Ray offers a pretty staggering leap in quality in every possible respect. Most noticeably, the blown-out contrast levels and digital sharpness tampering are nowhere in evidence here; flesh tones are accurate and very impressive here, while detail looks more filmic and naturally 35mm in appearance. Colors also look richer and more even throughout, while detail is increased exponentially across the board. The funeral finale in particular benefits from the quality jump, and since no one has actually seen the film in a presentation of this quality before, this release will not only make it easier to appreciate for Fellini fans but also stack it admirably against the small handful of his titles currently available in HD (most widely with Criterion's Amarcord). Click on any of the screen grabs here for a closer look at how it comes across in 1080 resolution. Some limitations of the source material pop up now and then, mainly the obviously inferior filming conditions of the night scenes which obviously couldn't be mounted with the same technical resources as his more large-scale feature films; that's something built into the source though and not a strike against the disc. All of the extras are ported over, and the English subtitles actually look a bit larger and cleaner with some translation tweaks here and there.