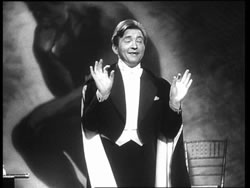 After his breakout performance as the lead in James Whale's classic 1933 version of The Invisible Man, Claude Rains seemed poised to become another iconic horror star with the ranks of Boris Karloff and Bela Lugosi. However, the British-born actor broadened his horizons right away with a string of ambitious action films and dramas (perhaps most famously with The Adventures of Robin Hood, Notorious, and Casablanca), coming back to horror only on rare, prestigious occasions like The Wolf Man. 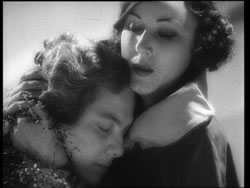 One largely forgotten showcase for Rains' versatility is a film that dances somewhere in the gray area between fantasy, mystery, and horror, a British-made curio called The Clairvoyant. The film is also noteworthy as the only time he was paired with the decade's most famed screamer, Fay Wray (King Kong), who had just bid farewell to pure horror films in 1934 with the bizarre and still neglected voodoo treat, Black Moon. Fortunately this film proves to be a worthy vehicle for both of them , and though it's still mostly unknown in America (where only a handful of incredibly shoddy public domain DVDs can be found in bargain bins), it's worth hunting down via the officially licensed British release.

Recently arrived in England for a string of music hall engagements, mind reader Maximus (Rains) is a flat-out phony who issues proclamations while blindfolded as his wife Rene (Wray) feeds him coded clues about the audiences. However, one night he discovers that, when he's in the same room as newspaper heiress Christine (Baxter), he really can predict the future – and his proclamation of disaster quickly comes true. Rene's father decides to bring Maximus on as the official prognosticator for his newspaper, but when the psychic warns of an impending mining catastrophe and tries to warn the workers to stay away, events take a sudden and nasty turn. 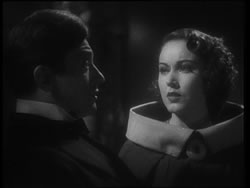 Director Maurice Elvey is better known for his prolific string of silent films including a string of Sherlock Holmes adventures; however, he brings a good eye for eerie detail here including some remarkably atmospheric shots of the mining tunnels and his evocative filming of Rains during the mind-reading sequences, especially an effective climax with Rains trying to outdo Bela Lugosi in White Zombie for wild stare-downs at the audience.

Presumably to better fit as a reissue on double bills, The Clairvoyant was rarely shown intact after its initial run; the 80-minute film was hacked down to 68 minutes (omitting one particularly crucial scene involving a potential suicide) and trotted around as The Evil Mind. The PD discs reflect this shorter cut, and in America, the full version was only fleetingly released on laserdisc under the Rank Films banner. However, the uncut version was remastered and aired on Turner Classic Movies with no fanfare, and this longer master appears to be the same one used for the region-free Odeon release in the UK. Though imperfect, the image quality is easily the best this film has ever looked; in particular, the black levels are now where they should be with satisfying depth in the picture throughout. Lots of age-related debris is still in evidence, but the clarity and the presence of real, silvery textures is a major boost for a film that's fallen between the cracks for far too long. The mono sound is also significantly improved over past versions, which were often muffled and inaudible. Extras include a liner notes booklet and cross-promotional trailers for other Odeon thrillers on DVD.