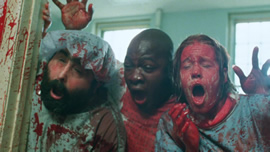 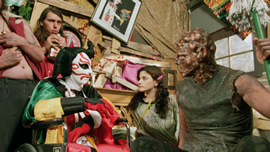 Eleven years after his last appearance on the big screen in The Toxic Avenger Part III: The Last Temptation of Toxie, New Jersey's most infamous superhero finally returned to the big screen less than two months after 9/11, which made the opening shot of the World Trade Center far more powerful than intended as soon as it unveiled. Married off at the end of the last film, he's still fighting crime but might have bitten off more than he can chew when he tackles some goons called the Diaper Mafia who have taken over and started terrorizing the Tromaville school "for the very special."

That explosive showdown sends Toxie spiraling into a dizzying alternate universe where he ends up swapping places with his evil alter ego, the Noxious Offender, aka Noxie. Now Toxie is in the parallel Amortville (a nod to Desperate Living?), and it's a race against time for him to get back before Noxie trashes the Tromaville we know and love down to the ground. That's all basically a framework on which to hang a lot of tasteless gags with plentiful gore (including a memorable decapitation after a man gets his face shoved where the sun don't shine), nudity, and corny jokes, seasoned with more cameos than usual courtesy of Ron Jeremy (as a religious politician, of course), Lemmy, Tiffany Schepis, and Corey Feldman (billed as "Kinky Finkelstein"), with a certain uncredited Marvel founder providing the bookend narration and filmmmakers/former Troma employees James Gunn and Eli Roth even popping up if you look fast enough.

By this point there really wasn't any way to keep any sort of series continuity going after the last film turned it into a total mockery (in fact, this film openly apologizes for the last two right at the outset), so once again there's some 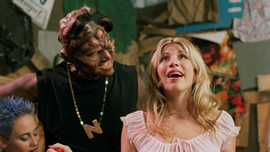 confusion over the name of Toxie's blind paramour (played this 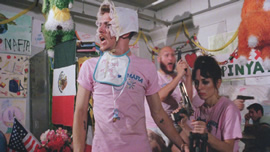 time by Sjursen, and even Lloyd Kaufman can't get her name straight on the commentary). That said, this is deservedly ranked by most fans among the top two films in the series and functions as a fine send-off (so far) for Toxie's big screen adventures. The humor is actually more savvy than usual with some topical nods that still feel a little uncomfortable (the dragging/lynch scene in particular), and the Troma in-jokes are also handled well with Sgt. Kabukiman (played by Paul Kyrmse) turning up in both his good and evil incarnations. Plus it has the world's first battle to the death in a womb, so that's got to count for something.

In keeping with the past three films, both unrated and R-rated versions were prepared to get this film out in as many video stores as possible. Fortunately the very dry, pointless R-rated one has largely been consigned to oblivion, as the unrated one has become the standard both on DVD and the 2015 Blu-ray edition from Troma. The non-anamorphic, interlaced DVD looks pretty dire and comes with a 7-minute blooper reel, a whopping 19 deleted scenes (most of them under a minute), a batch of 11 behind-the-scenes "Citizens of Tromaville" short videos (including a quick interview with Gunn in his undies, who had just finished The Specials), the usual assortment of trailers and "Make Your Own Damn Movie" promo, and three audio commentaries with Kaufman, editor Dave Friedman and associate editor Sean McGrath, and a patchwork one with co-writer/actor Trent Haaga and actors Mattey, Sjursen, Kyrmse, Michael Budinger and Joe Fleishaker. As usual these are full of odd stories involving wounds on the set, facial hair shaving, excessive body weight, and other topics you probably won't hear about on a Criterion commentary. The DVD also comes with a bonus disc containing another 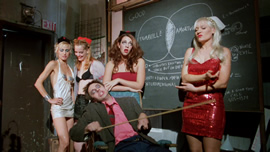 assortment of premiere footage and bonus Troma featurettes, but the real centerpiece is "Apocalypse Soon," a mammoth 147-minute documentary about the film that's ludicrously padded out but dotted with some funny moments of the cast and crew clowning around in front of the camera. 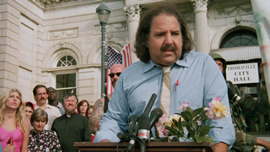 The Blu-ray will be worth picking up for fans on the basis of its transfer alone, which vaults way past the very old DVD master in every possible way. All of the Toxie HD transfers have been on the strong side (apart from a replicating goof on the first pressing of the second film), and this one is up to snuff with nice, strong colors, deeper blacks, and far more detail than before. The source material is generally clean apart from a few scuffs here and there, which may have been part of the original negative. Per Troma standards, the English audio is lossy Dolby Digital stereo, as opposed to the lossless audio on the UK release (which pretty closely mirrors this one otherwise except it adds in all the additional DVD extras). All three commentaries have been ported over here along with the full "Apocalypse Soon" doc, but you'll want to hang on to the DVD (also included in the dual-format package) for everything else. New bonuses include a recent, HD-shot intro by Kaufman, the now-obligatory American Cinematheque Troma salute video, and an 8-minute salute to Lemmy, the Motorhead lead singer who's been connected to several Troma productions over the years.