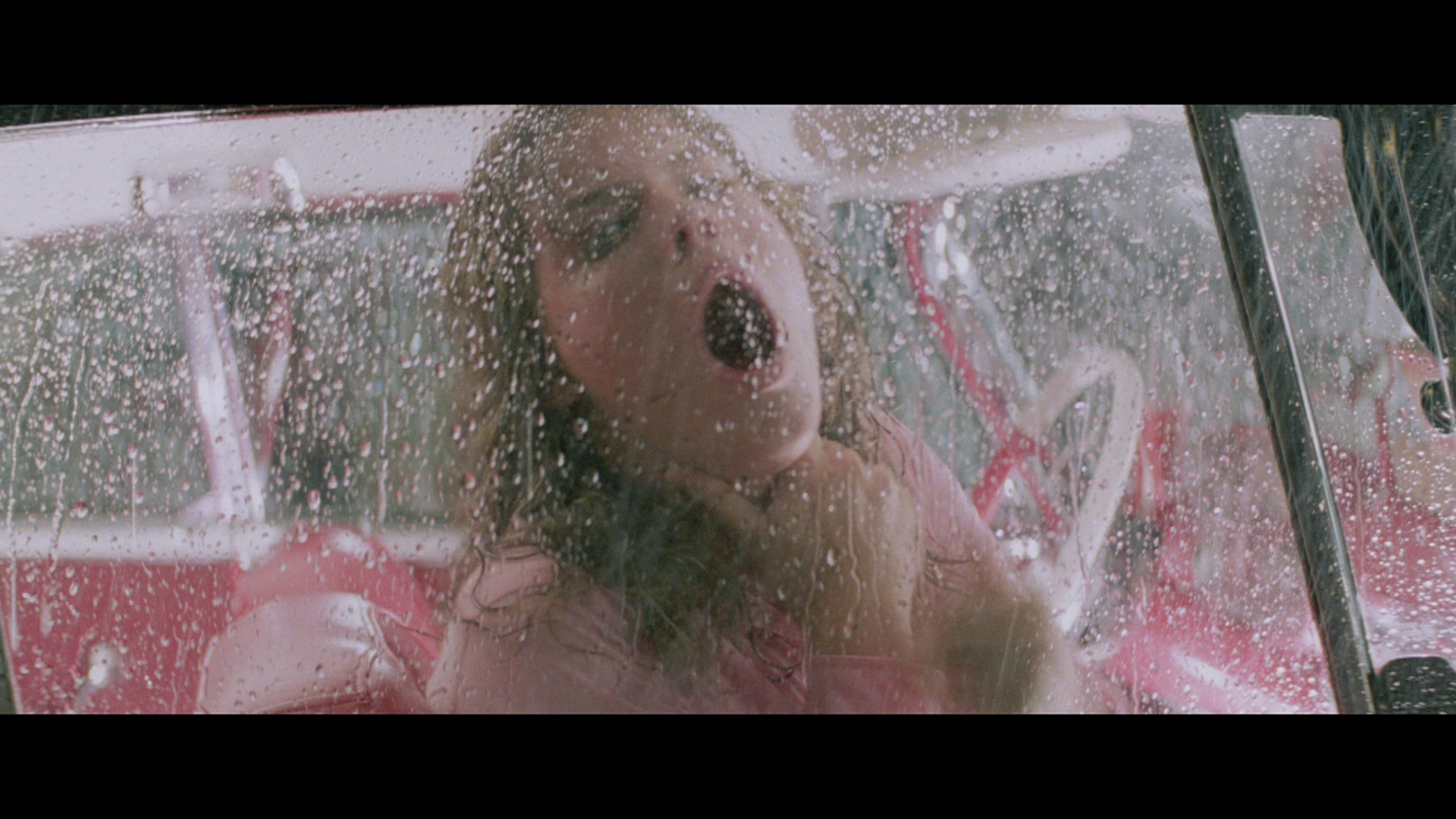 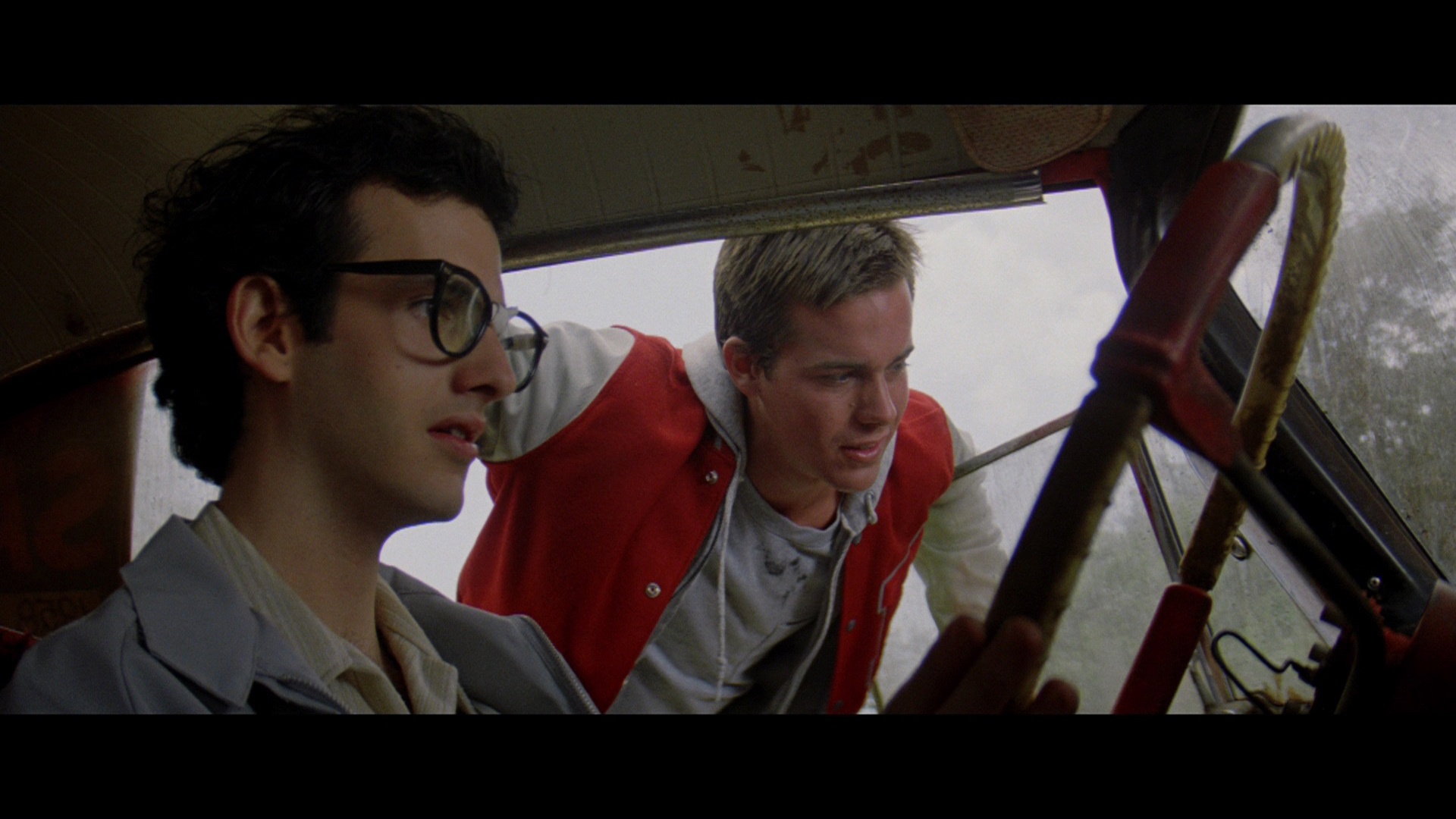 You could easily fill up a class or two on how to translate a problematic novel into a film with John Carpenter’s slick, sleek take on Stephen King’s occasionally effective but lumbering, self-indulgent 1983 killer car novel. The mania for King films was at its zenith in 1983, with Carpenter’s film hitting theaters a mere eight months after the book’s publication and closing out a year that also saw The Dead Zone and Cujo on movie screens (with Children of the Corn and Firestarter soon to follow). For some reason Christine isn’t usually listed near the top of Carpenter’s films (the director himself admits he had no personal investment in the story), but he brings a razor-sharp sensibility here with screenwriter Bill Phillips miraculously pruning the novel’s erratic backstory and weird structure (the narrator sits out the entire middle third) into a fast-paced shock machine that still works beautifully.

After a brief, amusing prologue in which we see the title car, a 1958 cherry red Plymouth Fury, being wheeled off the assembly line and already causing mayhem, the film jumps to the late ‘70s (complete with an elegant transition via the song “Not Fade Away”) to focus on a disparate group of high school students. Arnie (Gordon, excellent), a laughable nerd, and Dennis (future director Stockwell), a clean-cut 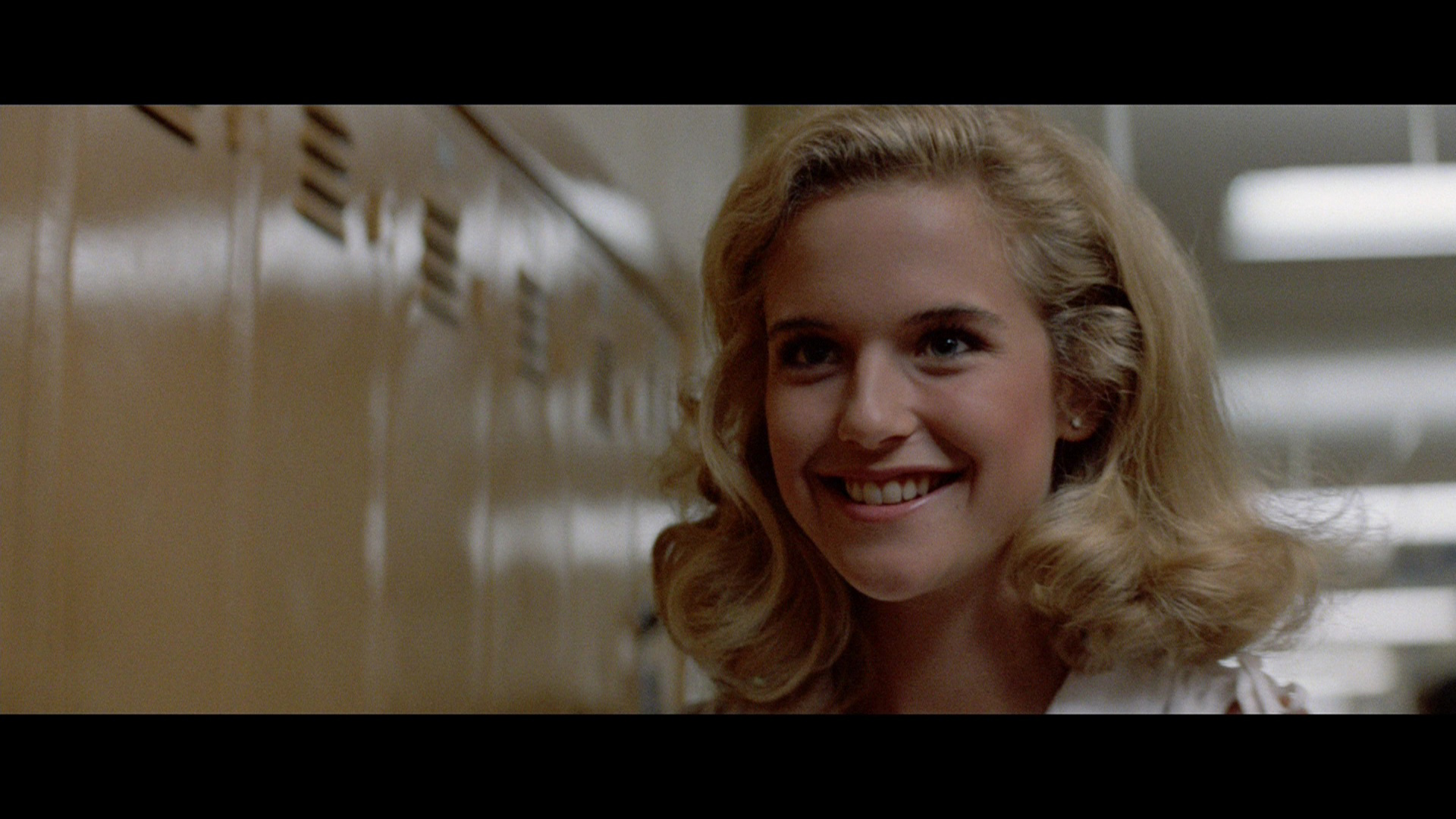 jock, are unlikely friends whose bond 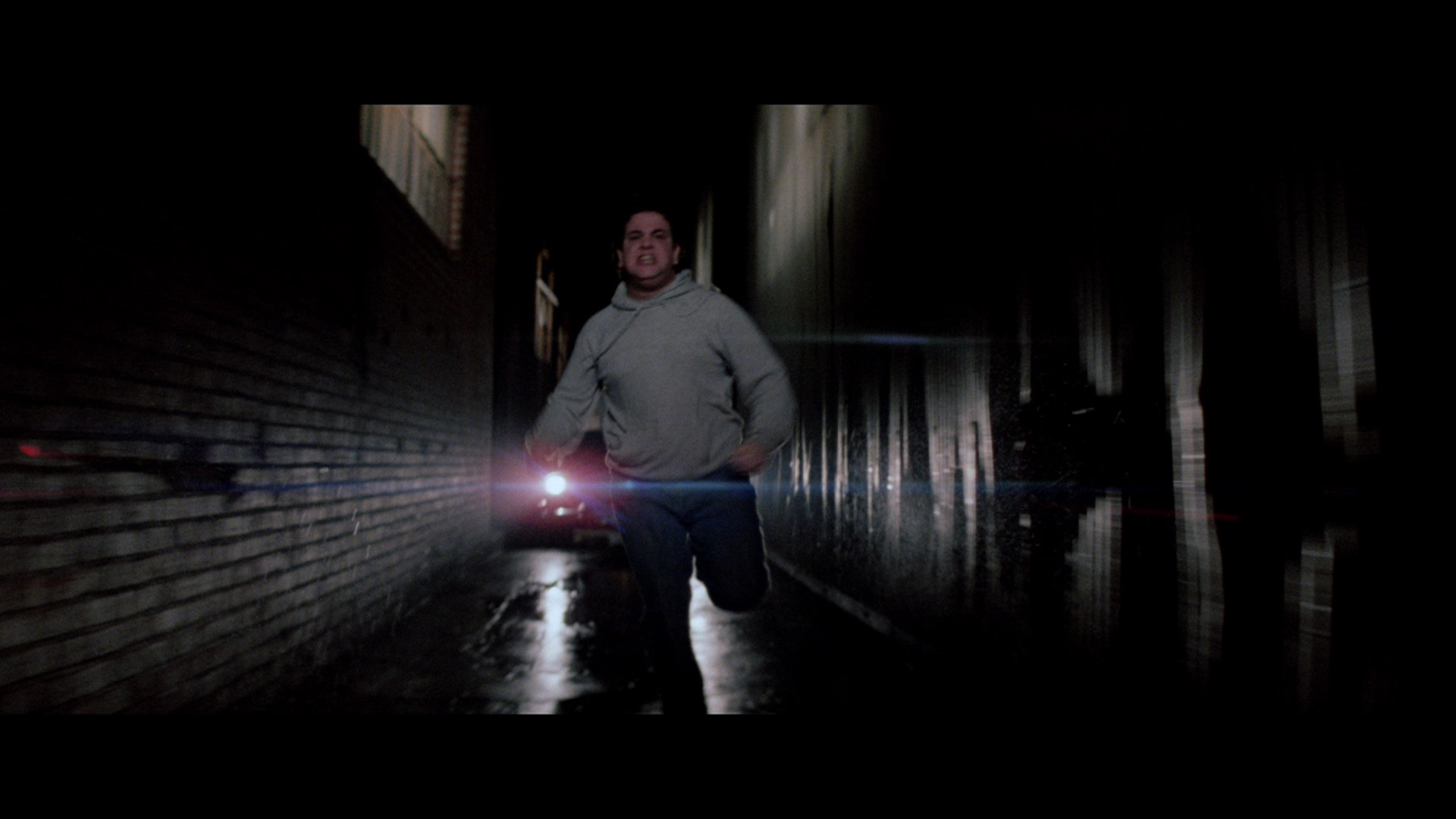 is tested by two new arrivals: Arnie's renovated new car, Christine (acquired over the violent protests of his parents), and a new girl at school, Leigh (Baywatch's Paul). Thanks to the malefic influence of his car, Arnie becomes darker, cooler, and more dangerous, attracting Leigh but putting her in danger when the car itself becomes jealous. One night Christine is trashed beyond recognition by a group of bullies, but when the vandals begin to die one by one, Dennis and Leigh begin to suspect that their friend may be under an evil influence or perhaps a murderer himself.

Though the device of a killer car had already become overdone to the point of parody by this point, Carpenter injects the concept with a dose of simple but extremely effective special effects which are far more effective than the avalanche of CGI the story would probably receive today. As usual Carpenter (in collaboration with Alan Howarth as usual) turns out a fantastic synth score, and the scope lensing provides expert flashes of light (no movie has ever used lens flares better) and inky pools of shadows turning the attack scenes into fiery set pieces not easily forgotten. Sleaze fans should also get a kick out of seeing Roberts Blossom from Deranged in a potent cameo as Christine's prior owner, and look for Kelly Preston (pre-Mischief and Travolta marriage) as Dennis's girlfriend.

VHS was pretty brutal on this film with pan and scanning demolishing almost every scene, and even the first letterboxed release on laserdisc was a disappointment 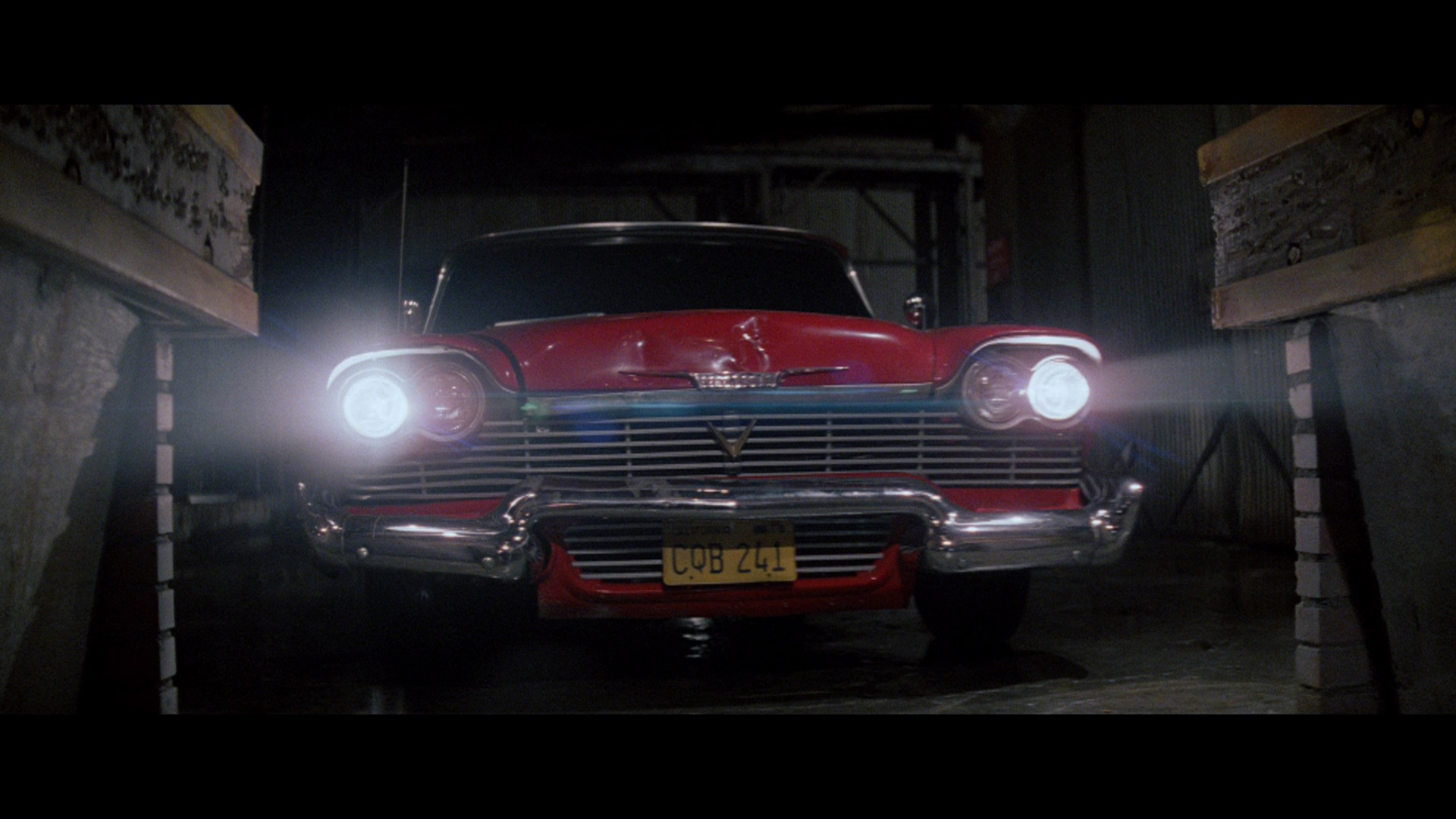 with a soft, pale transfer that barely did justice to the film's intended look. Sony released two DVDs, 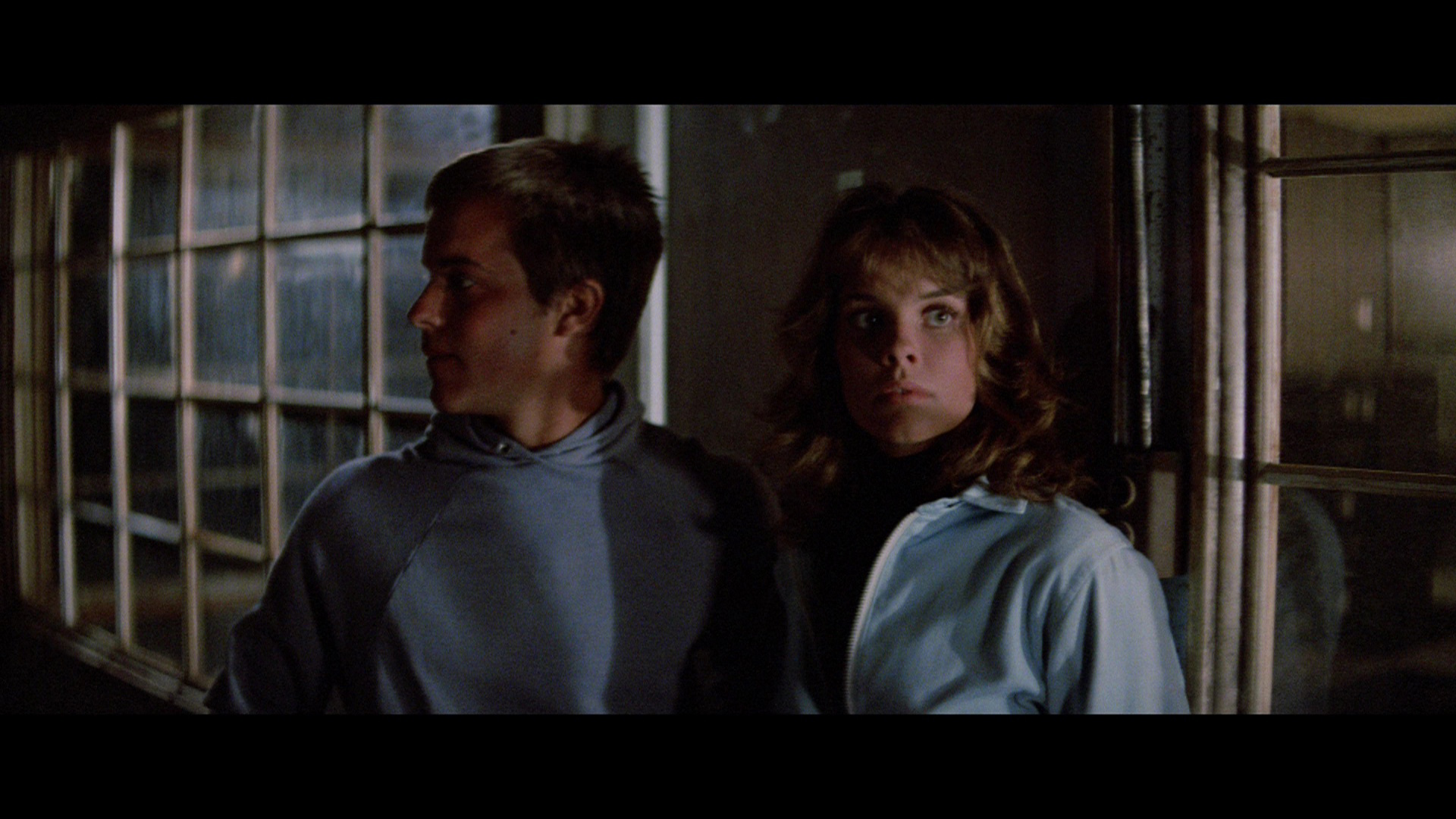 the first a pretty solid anamorphic transfer with zero extras (and a terrible cover) and a special edition whose extra features have remained a constant ever since. The film made its Blu-ray debut in 2013 from Twilight Time in an edition that sold out very quickly, featuring a 2K restoration supervised by Sony that laid waste to its SD predecessors. The English audio is only presented in a DTS-HD MA 5.1 remix with optional English subtitles, spreading out the original Dolby Stereo mix considerably with the score largely pushed to the front and rear channels; a very welcome isolated score track is included, featuring quite a bit of music missing from the film's official soundtrack release. (Weirdly, the film's stellar selection of Motown and rock standards still remains available as a soundtrack only on vinyl.) All of the DVD extras have been ported over: a fine audio commentary with Gordon and Carpenter, a 26-minute reel of deleted scenes (including a brief but poignant Arnie breakdown that could have easily made the final cut), and three featurettes: "Fast and Furious" (28 mins.), "Ignition" (12 mins.), and "Finish Line" (7 mins.), with Carpenter and Gordon sitting in front of the camera to talk about the film's evolution, the tricks of presenting Arnie's internal transformation on film, and the demands of the practical special effects, among many other topics.

The same package was essentially ported over a Germany Blu-ray and an American reissue, both from Sony in 2014 and 2015, though you'll 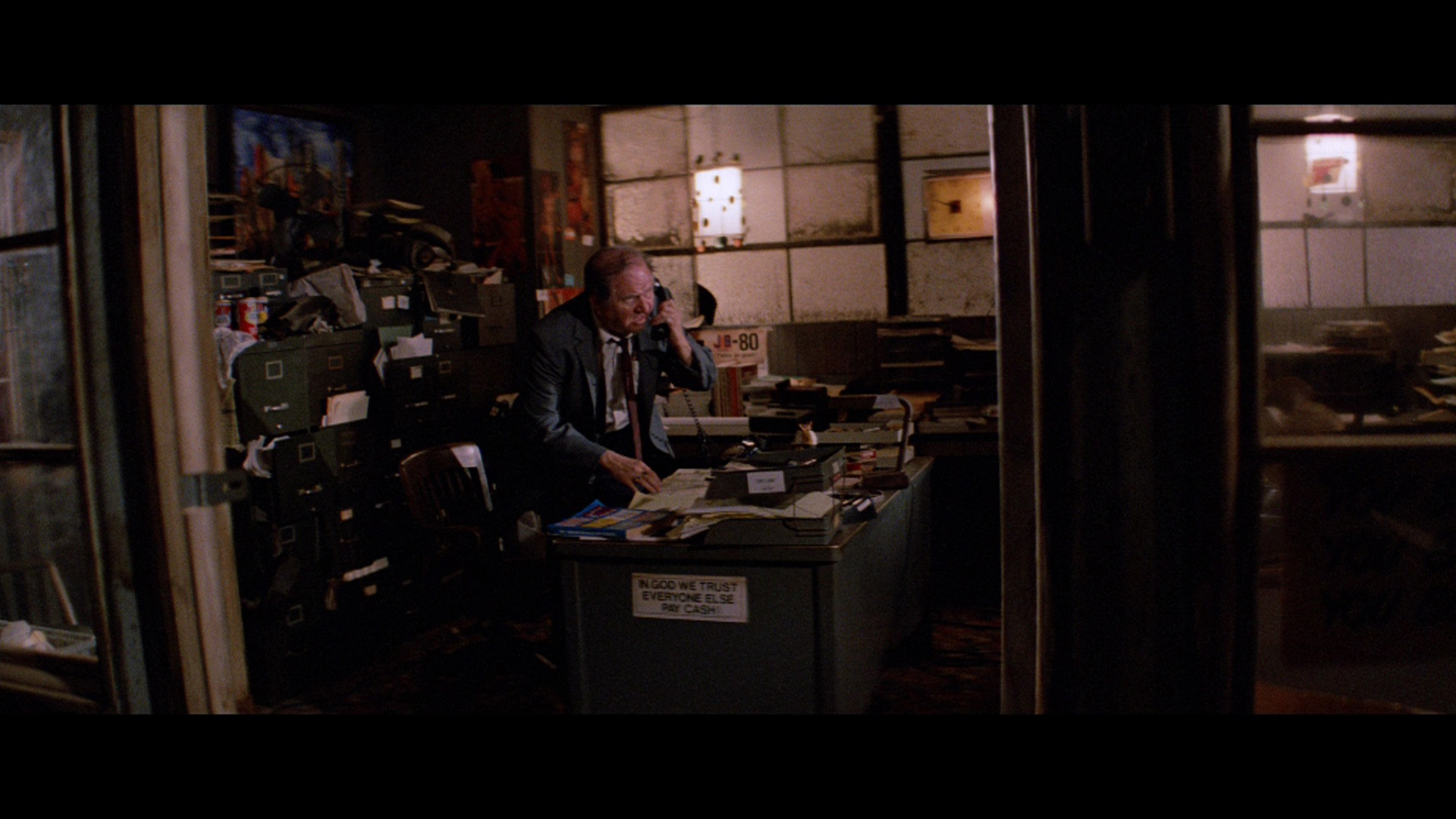 get the most bang for your buck with the UK Blu-ray from 2016 courtesy of Indicator. The same raw HD scan is the source here but the bit rate has been maxed through the roof, resulting in the most impressive presentation in motion. There's really nothing to criticize here at all; it's a gorgeous presentation with plenty of depth, bold colors, and nice, deep black levels. The LPCM English stereo theatrical mix is included here, a very nice nice and overdue addition, along with the usual DTS-HD MA 5.1 mix. The isolated score, commentary, and featurettes are all included, but you also get two trailers and two TV spots, half of which reflect that great impressionistic teaser campaign consisting of close ups of the car and a great voiceover delivering the memorable tagline, "Body by Plymouth. Soul by Satan." (Some fun plugs for the novel's recent transition to paperback, too.) As with Indicator's superb release of Body Double, the elegant liner notes booklet is also an impressive inclusion with a striking layout and text material including a new essay by Jeff Billington ("Cars and Girls") about the film's (and novel's) obsession with '50s teen culture, and a reprint of a 1996 Film Comment article by Carpenter about his favorite movie guilty pleasures, not surprisingly including plenty of '50s and '60s monster movies and pulp adventures (with a few surprises thrown in).