Best known for churning out a series of simplistic but beloved laugh-track cartoons like The Flintstones, Hanna-Barbera tried for years to compete with Walt Disney on the feature-length front with 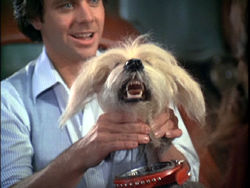 a number of oddball projects ranging from the passable (Charlotte's Web) to the downright bizarre (KISS Meets the Phantom of the Park). For some reason in 1979 they decided to corner the live-action kiddie market by teaming up with American-International Pictures, the greatest supplier of drive-in bliss America has ever known, and came up with one of the strangest kid's films ever made: C.H.O.M.P.S.

After the sub-Disney animated credits, our story takes place in a typical idyllic suburban neighborhood where young security entrepreneur and inventor Brian Foster (Wesley Eure from Land of the Lost and The Toolbox Murders) toils away on his latest project while keeping his engagement to pretty Casey Norton (One Day at a Time's Valerie Bertinelli, a.k.a. Mrs. Eddie Van Halen) a secret from her corporate bigwig dad (Diff'rent Strokes's Conrad Bain). Soon Brian's confident enough to show off his latest innovation in home safety: C.H.O.M.P.S., an acronym for 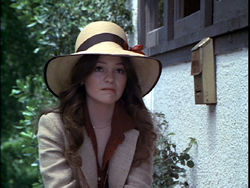 "Canine Home Protection System." (Presumably he's from the same school that came up with C.H.U.D., but shouldn't it be "C.HOM.P.S.?") Modeled after the couple's pet pooch Rascal (who's understandably distraught to see a mechanical replica of himself with a severed head and detachable torso), C.H.O.M.P.S. is a bionic wonder complete with super speed, X-ray vision (complete with demonic glowing red eyes), and powerful strength (none of which really come into play for the story, but never mind). When not chasing down crooks, C.H.O.M.P.S. spends his time terrorizing his neighbor's dog, Monster, a pissy black dog complete with a grumbling voiceover prone to uttering such kiddie-friendly catchphrases as "Smartass!," "Aw, shit," and "Up your pooper, Granny." Before long a rival security company has its eye on the supermutt, and slapstick mayhem naturally ensues.

To complete this film's quasi-Disney connection, HB brought on overqualified director Don Chaffey, who helmed one of Uncle Walt's best films (The Three Lives of Thomasina) and the Harryhausen classic Jason and the Argonauts. He brings a professional polish but little else to the proceedings, apparently smothered by the incessant sub-disco music score and irrepressible mugging from Red Buttons and Larry Bishop in comedic supporting roles. The film also tries to cash in on a few other non-Disney trends of the period, most obviously the Benji series and The Six Million Dollar Man, but does so with a sledgehammer approach not seen since the comedies of William Castle. Perhaps most surprising is the film's callous treatment of the robotic hero, who is constantly seen in various states of dismemberment reminiscent of Lucio Fulci's A Lizard in a Woman's Skin and subjected to a brutal fate in the climax that had matinee kids scrambling for the exits. Evidently the trauma was significant enough that the PG-rated film was yanked and re-edited for a G rating, with every bit of canine profanity either removed or redubbed.

Fortunately as per their past track record, MGM (under their MGM Kids line) has delivered more than their packaging promises with this release. Ignore that G rating on the back of the sleeve; this is the full uncut version with every Monsterism intact. The transfer kicks off with letterboxed (1.85:1) opening credits and then unspools full frame from that point; fortunately it's completely open matte, so nothing's missing on the sides and viewers with 16x9 televisions can just zoom in to recreate the original theatrical framing. Picture quality is fine considering the flat nature of the film, with punchy colors and no evident element damage; it never looked half this good in theaters. The mono audio is clear enough, and turn on those optional English subtitles to catch a few mildly lewd comments that might otherwise slip by unnoticed. The only extra is the theatrical trailer, which sells the film in the typically subtle and restrained manner one always associates with Hanna-Barbera. The film was later packaged as a very odd doggie double feature with Because of Winn-Dixie in 2010 and a triple feature with Good Boy! and Napoleon.