Though best known as a novelist, the notorious Jean Genet also made a brief foray into filmmaking with a silent short film, Un chant d'amour, originally produced for the Parisian stag film underground. Though it doesn't feature 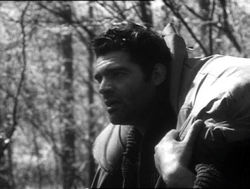 any sex per se, the film plays like an eroticized ode to the films of Jean Cocteau; from the quaint chalkboard credits to the surreal use of disembodied hands and torsos, the film clearly sprang from the same soil as Orpheus and Beauty and the Beast. However, Genet also includes elements that would also populate his written work: shared tobacco, flowers, prison walls, voyeurism, nature worship, flowers, and victimization, to name but a few. Genet later denounced the film when his career began to ascend, but it was eventually reclaimed by the art house community and hailed as a groundbreaking classic. Without this film, the films of Todd Haynes and Derek Jarman would have had a much tougher road to follow.

The "story" takes place at an unnamed stone prison where a guard sees two male arms swinging a floral branch out of a barred window. He enters the prison and looks into each cell, observing the inmates in a state of extreme 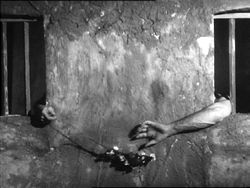 sexual agitation. Two prisoners share a cigarette by blowing smoke back and forth through a straw, forced through a hole in the wall (an image more memorably lewd and poetic than any of the film's more notorious nudity). The prison guard finally enters one of the cells and indulges in a lengthy S&M fantasy climaxing with an image later replicated in Beyond the Valley of the Dolls, before the day finally closes.

More often discussed than actually seen, Un chant d'amour (translation: A Song of Love) is a fairly tough sit for 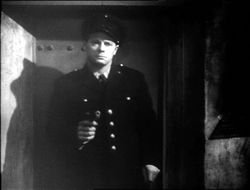 those not already disposed to avant garde filmmaking; even more challenging is the lack of a soundtrack. While some critics came up with elabroate symbolic explanations for the film's silence, the truth is it's a bit of a slog without any music. The worthwhile but wildly overpriced bfi disc (which flies in the face of Genet's wishes to never have the film commercially released) adds a score by regular Jarman composer Simon Fisher Turner, and the percussive music suits the film well; it's an appropriately stark and sparse composition similar to his work on Edward II. Image quality is extremely good; every awkward splice and scuff is still in place, but the level of detail is astonishing for a 35mm film usually seen in muddy 16mm copies or bootleg tapes. Extras include a commentary by writer Jane Giles and director Richard Kwietniowski (Love and Death on Long Island) which elaborates on the film's history, its place in Genet's highly unique artistic canon, and its influence on gay culture over the years. Also included are text bios of Genet and Turner.

More affordable and offering a completely different set of extras is the two-disc American set from Cult Epics, which presents a similar transfer but without a music score; get a CD handy to play while watching it. This time the audio commentary comes from none other than Kenneth Anger, who goes into great detail about the film's origins, Genet's intentions, and the state of experimental filmmaking at the time. Also included on the first disc is an introduction by Lithuanian avant garde director Jonas Mekas, who sits way, way too close to the camera as he talks for eight minutes about the film's origins and its importance in underground film culture.

Disc two features two documentaries, starting with Antoine Bourseiller's "Genet" (52 minutes), a very candid 1981 talk with the cigarette-puffing author outside a country home in which he talks about his prison experiences, his sexuality, his novels, and lots, lots more. The following year's "Jean Genet" (46 minutes) by Bertrand Poirot-Delpech is another interview (indoors this time) with a more theoretical and academic examination of his writing technique. Both are worth viewing; if you're really a completist, also be sure to track down the South Bank Show episode devoted to him as well, which is floating around among video traders. Overall, both discs are valuable additions to the Genet legacy and feature no overlap whatsoever, making each a unique and recommended purchase.