Though the cover tags this glossy vampire flick as Central Park Drifter, it's actually a 1987 film called Graveyard Shift, presumably retitled for its DVD debut to 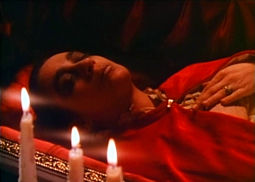 avoid confusion with the 1990 Stephen King abomination. A staple of video stores during the format's early days, this odd blending of fang-gnashing, light erotica, romance, and urban blight still holds some interest in an overcrowded genre, and while the actual presentation leaves much to be desired, fans of cinematic bloodsuckers may still find it worth a look.

The generic plotline concerns a taxi driver named Stephen Tsepes (Silvio Oliviero), who uses job to procure women as food for his vampiric habits. In between Scorsesian forays through the city's mean streets, Stephen turns the occasional despairing lady into a creature of the night who crashes swanky high society parties. The repetition of Stephen's existence is disrupted by Michelle (Helen Papas), a producer who awakens emotions inside his undead heart. Meanwhile, the escalating body count from Stephen's disciples has the police hunting down a scapegoat. If you've seen any other post-'85 vampire erotica like Roger Corman's Dance of the Damned, you can probably guess where it all heads after that. 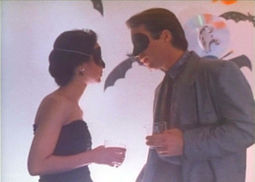 Extremely skimpy on substance, Graveyard Shift instead tries to pump out as much style as possible on an impoverished budget. Poised somewhere between MTV, French cable porn, and Dario Argento, the film's visual style is so relentless and strange that it compensates somewhat for the film's numerous technical faililngs, particularly the badly post-synched dialogue. Oliviero is a refreshing change from the standard lonely, Tiger Beat friendly vampire hero; instead he could have easily stepped out of an Abel Ferrara movie. Fans of blood and boobs will find plenty of distractions here, as every ten minutes or so finds another fleshy coupling turning nasty with a flash of someone's pointy choppers. The Hunger this ain't, but Graveyard Shift is an adequate way to kill an hour and a half and, perhaps because of its '80s trappings and weird fusion of genres, remains more interesting than today's direct to video horror fare. 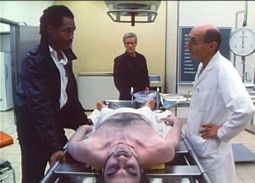 Though its colorful visuals cry out for a top of the line digital transfer, Graveyard Shift has instead been ported over to DVD from a lousy one-inch master that looks at least as bland as the VHS edition, released over a decade ago. Video noise, smudgy colors, and some distracting wavy patterns visible in dark black areas are only the beginning of this transfer's problems; surely a better element must exist somewhere. The mono soundtrack is likewise flat and unimpressive. The real selling point for this disc, which is otherwise light on extras, must surely be the trailers for other Shriek Show titles, including gory Euro trailers for Joe D'Amato's Beyond the Darkness and Andrea Bianchi's marvelous schlock gem, Burial Ground, as well as what appears to be a rough edit of a promo for Lucio Fulci's Demonia.