For those of you who like to keep track of that peculiar strain of science fiction movies about distant worlds inhabited by sexy women, Cat-Women of the Moon is most likely the one that started it all. Sure, things got loopier with the likes of Doris Wishman's Nude on the Moon, but on the other hand this one comes complete with giant immobile spiders (yup, the same ones used in Missile to the Moon), alien catgirls doing interpretive dances in black leotards, and music by the great Elmer Bernstein back when he was slumming with the likes of Robot Monster. What's not to love? 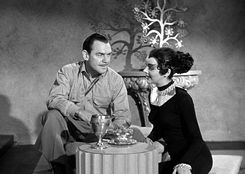 A band of astronauts led by the unlikely pair of Laird (Sonny Tufts) and Kip (Victory Jory) head into space with the assistance of one female, Helen (kittenish western staple Marie Windsor). As they approach the moon, Helen goes ballistic and causes the ship to crash, leaving the astronauts to explore the sinister caves of their strange new world. After an ambush by space spiders, the visitors are taken to the architecturally questionable lair of the moon women, whose feline attributes are mainly confined to their exotic make-up and slinky dance routines. Naturally it turns out that Helen fell under the women's telepathic control as they neared the moon, and in fact they plan to hijack the ship for their own nefarious purposes. Can Helen resist their cunning psychic powers? Can the men stay out of the tempting clutches of the cat-women? Watch and find out! 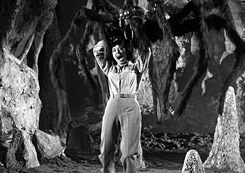 Like Robot Monster, this film was shown in both flat and 3-D editions. However, director Arthur Hilton (whose career pretty much slammed to a halt with this one) fails to exploit the 3-D device at any point, even during the spider footage. Anyone who has tried to sit through Rhino's awful 3-D VHS edition (which looks like 2-D, only fuzzy and a lot more annoying) will be thankful that the Wade Williams/Image DVD is instead taken from an immaculate, razor sharp 2-D print. The quality is much better than you would ever expect, easily outclassing the other past tape versions. Just savor every little detail, from the outer space matte paintings to the strings holding up the spiders to the shimmering bits of decor in the cat-women's foyer. The mono audio is also crisp and free of any noticeable defects. The disc also includes the lurid original theatrical trailer, which offers a nice thumbnail description of the entire film. Come on, you know you want it.