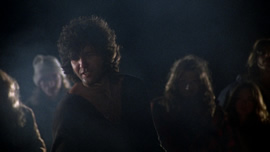 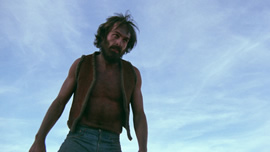 Now here's a fascinating one. The late '60s theater revolution sparked by Hair had a peculiar effect on Hollywood, with producers scrambling to mount counterculture musicals that would appeal to the long-haired set. However, the results often turned out to be head-scratching oddities like Zachariah, and moviegoers stayed away in droves. Around the same time America was experiencing the Jesus movement, a West Coast-spawned fusion of Christianity and hippie culture that influenced everything from folk music to mainstream theater with big productions (and film adaptations) like Jesus Christ Superstar and Godspell.

One show capitalizing on both of these trends was Catch My Soul, a rock musical based on William Shakespeare's Othello that found some popularity in the UK from 1968 through 1972 (after a very brief American run starring William Marshall and Jerry Lee Lewis!). Mounted by rock music and TV producer Jack Good (Shindig!), the production relocated the story of Othello's stormy, jealousy-tainted marriage to Desdemona to modern-day England with a striking selection of songs combining rock, blues, folk, and psychedelia. Not unreasonably, Good decided to turn the show into a film with a change in locale to Santa Fe, New Mexico, 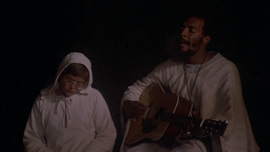 with one of its local part-time residents, actor Patrick McGoohan, brought aboard as director. The Scanners star had helmed a few episodes of his influential TV series, The Prisoner, but trouble ensued when Good's fervent conversion to Catholicism near the end of production mandated a drastic increase in the story's religious content, shot against the director's wishes. The Metromedia production was distributed by Cinerama, who abandoned a wide release plan after it played to virtually empty theaters in New York. New Line tried to reissue it as Santa Fe Satan with equally underwhelming results, and the film sank from view entirely for decades. Considering the caliber of talent involved and the 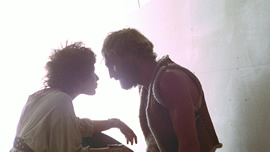 quality of the music, the film's fate seems genuinely puzzling; however, that's just the way the movie biz works.

Legendary singer Richie Havens stars here as Othello, a wandering preacher who ends up at a desert commune run by Iago (LeGault, reprising his stage role), who announces in his first song that he's also Satan himself. Othello falls in love with and marries the young Desdemona (Vice Squad's Hubley, made up to look as boyish and homely as possible). That turn of events ignites a diabolical plan by the resentful Iago to paint the new bride as unfaithful, which is accomplished with the reluctant involvement of his wife Emilia (the always great Tyrrell) as Othello is distracted by the construction of a new church. Iago's plan works all too well, which results in significant bloodshed by the end credits. 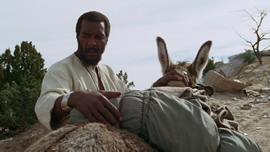 The idea of musicalizing Othello was hardly a new one at the time, with McGoohan himself even starring in Basil Dearden's superb 1962 jazz variation, All Night Long. This particular version most likely blended in too closely with its other counterculture rock opera cousins to stand out, but today it holds considerably more interest as an odd relic that would never be made today in a million years. Havens sings well as always and isn't called on to emote too much, while LeGault and Tyrrell virtually steal the show with their fiery performances and dark charisma. However, the real MVP here is easily cinematographer Conrad Hall, who had cut his teeth on The Outer Limits and won an Oscar for Butch Cassidy and the Sundance Kid (with two later Oscars to follow for Sam Mendes films). The look he crafts for the film is truly amazing at times with a painterly sensitivity to light and shadow; in particular, the long night sequences bookending the film are a virtuoso visual feast more reminiscent of a horror film than a traditional musical. It's also sharply edited by another future Oscar winner, Richard A. Harris (Titanic), who does a particularly adept job with Iago's solo numbers that foreshadow some of Ken Russell's work on Tommy.

Etiquette Pictures' laudable efforts to resurrect lost curios of American cinema continue with this dual-format release on Blu-ray and DVD, the first time the film has been issued on home video format in any form (after being presumed lost for decades). The original 35mm negative prepared for its reissue looks fantastic (with the Santa Fe Satan title card popping up early on), with no 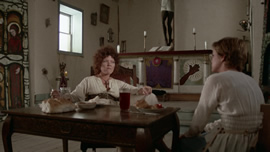 quibbles whatsoever given the excellent condition of the source material and the rich, impressive quality of the transfer itself. The DTS-HD MA mono track sounds mint as well. 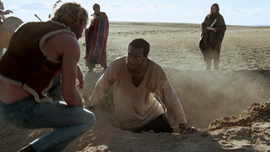 Now, on to the extras. The 20-minute "Drink the Wine, Eat the Bread" is the most elaborate look at the making of the film as executive producer Charles Fries (who handled Tales from the Crypt for Metromedia) and associate producer Huw Davies going through the transformation from stage to screen for what sounds like a pretty debauched film shoot, with McGoohan's notorious fondness for the bottle and everyone else's chemical indulgences resulting in some funny stories. They also go into the film's strange, jinxed distribution history including a New York screening only attended by nuns. An 11-minute interview with co-star and swamp rock favorite Tony Joe White is called "The Deacon Speaks" and goes into detail about how he was recruited to be himself since he didn't have any acting experience, and he recalls McGoohan's subtle way of drawing out a performance. The 8-minute "True Soul" features Hall's daughter Naia offering her recollections of her father from early days watching his work on The Outer Limits through his development through Hollywood while retaining a strong sense of self. Also included in addition to the usual reversible artwork and a solid liner notes essay by Tom Mayer are a B&W theatrical trailer, a TV spot, and three minutes of promotional stills and artwork. All in all, a nearly miraculous salvage job for a fascinating film bound to find some devoted new followers.