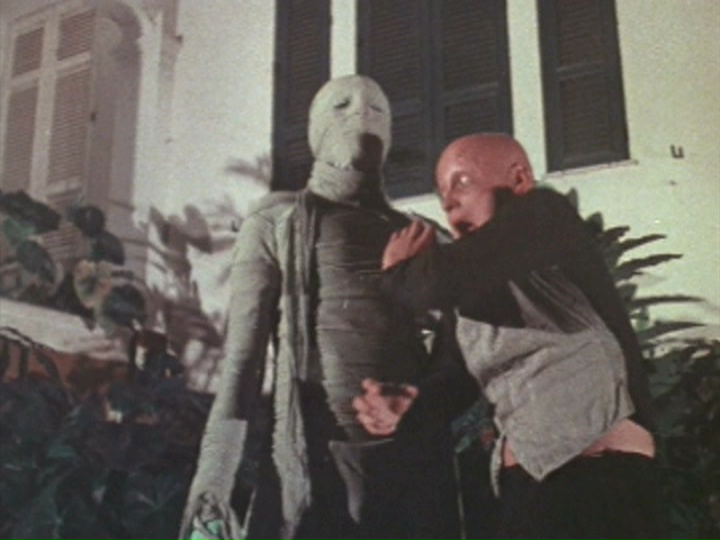 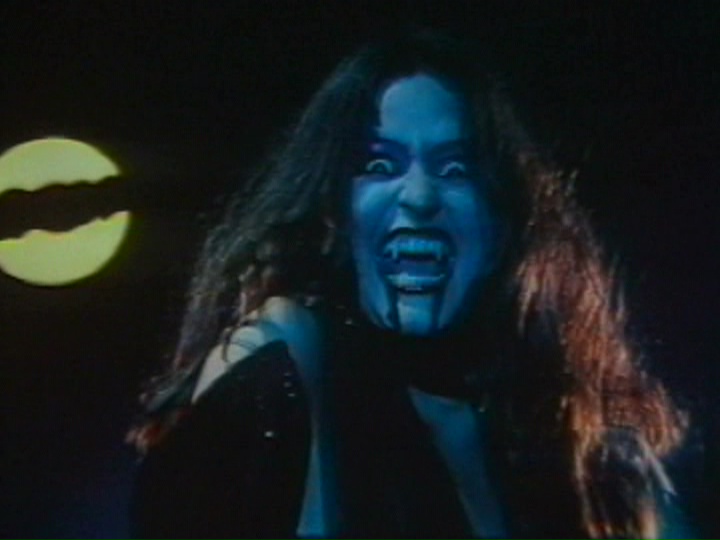 Back around 1993, Something Weird Video did the world a huge favor by bringing out several English-subtitled VHS releases of the films of José Mojica Marins, who was christened as Coffin Joe for the American audience. Part of that deal to acquire these transgressive works of Brazilian horror and fantasy was the inclusion of a trio of films by Ivan Cardoso, a much more jovial colleague of Marins who had even directed a short documentary about him before launching into a feature film career. The Something Weird line encompassed Cardoso's first three solo features, all of which are returned to circulation after decades of unavailability courtesy of Camp Motion Picture's three-DVD set named after a more recent feature starring Spanish horror legend Paul Naschy.

Disc one gets off to a wild start with Secret of the Mummy (1982, 81 mins.), an homage to Universal and Hammer classics with grouchy, world-famous archeologist Professor Vitus raiding pyramids in Egypt for research in his ongoing Elixir of Life project. The tomb of the mummy Runamb, discovered with the aid of a reconstructed map that seems to cause the deaths of anyone who possesses it, seems to hold they key he's been searching for, infiltrated with the aid of his blonde, bikini-clad assistant/wife and his bald, sex-crazed henchman, Igor. Contemptuous to reporters and increasingly mad with delusions of grandeur, Vitus ends up unleashing a monstrous, murderous force still obsessed with his ancient love, veil dancer Nadja, which leads to a violent finale. In many ways this is still Cardoso's best and most charming film, a ribald and energetic classic monster pastiche that feels like a more sincere and ambitious Brazilian spin on those Harry Novak nudie cuties like House on Bare Mountain and Kiss Me Quick! That same aesthetic spills over to the second film on that disc, The Seven Vampires (1986, 90 mins.), a cheeky slice of camp horror nonsense with a dubbed intro by Alfred Hitchcock (pilfered from his TV show), a minimalist synth pop score, man-eating plants, gratuitous aerobics, full frontal female nudity, a theatrical stage performance crashed by vampires a la Anne Rice, a Buddy Holly-style dance number, a bumbling private eye, and other random elements. The loose plot involves experiments by botanist Federico (Coelho, a dead ringer for Re-Animator's David Gale) on a giant, blood-slurping plant that seems to have triggered a killer epidemic centered around a mystery killer and the Seven Vampires, a performing troupe at the nightclub owned by the scientist's wife. It's pure pulp trash in the best sense, and though the story gets a bit garbled at times (a common trait of Cardoso's films), it moves at a quick pace and constantly blasts your eyes with bright colors and off-kilter visuals. 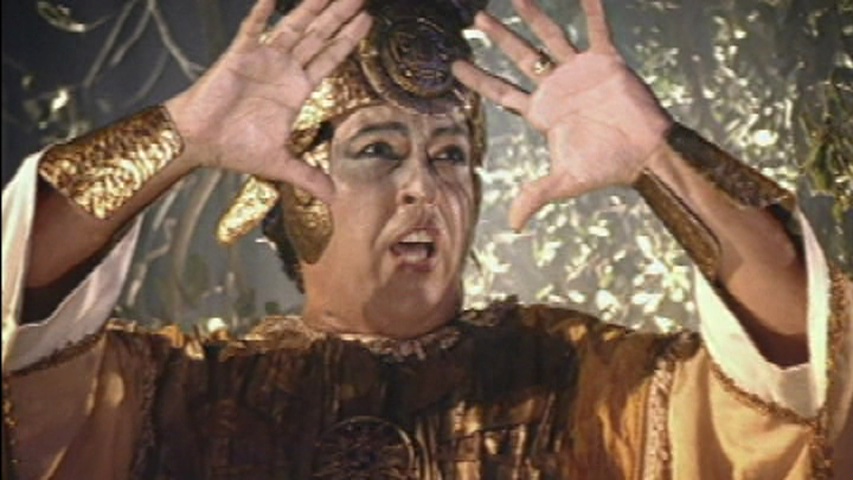 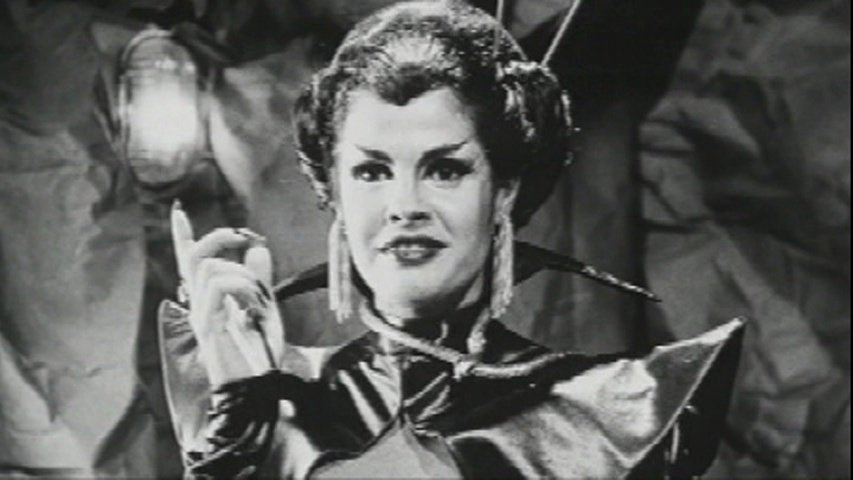 Disc two veers away from horror for the most part with film number three, The Scarlet Scorpion (1990, 83 mins.), a fairly stylish homage to early serials and crime fighter stories, particularly ones of Brazilian radio and the weirder European variants like Kriminal, Judex, and Diabolik, as well as American ones (especially The Green Hornet). An arch criminal named the Scarlet Scorpion is making life a nightmare for millionaire Angel (Capri), but these black-and-white sequences are framed with color ones; you see, it's all an ongoing radio story being performed by Alvaro (also Capri), but it's all being copied in real life as noticed by pretty fashion bigwig Gloria (Beltrão). When the Scarlet Scorpion strikes and holds Gloria for ransom, our hero blurs the line between fantasy and reality even further. Again this one is much kinkier than the films that inspired it, with its major claim to fame now being a showstopping sequence involving burlesque transsexual Roberta Clouse. As mentioned above, the film that gives this collection its title and the most recent full feature in the set, A Werewolf in the Amazon (2005, 76 mins.) features Paul Naschy as Dr. Moreau, a mad scientist conducting dangerous experiments deep in the Amazon. Into his domain stumble several goofy teenagers with a video camera, who make their way to his lab after tangling with some half-naked Amazon women and watching a crazy Aztec musical performance. There's also a cage of failed experiments, and of course, a werewolf prowls the area attacking the youths in their tents. The title monster doesn't get a ton of screen time (one nocturnal encounter and a little bit of running around at the end), but there's enough stuffed into this film to keep it lively with Naschy giving a bit of credibility to the goofy proceedings. Yes, this is technically Naschy's last werewolf feature, made hot on the heels of his unlikely Waldermar Daninsky swan song with Fred Olen Ray's Tomb of the Werewolf! 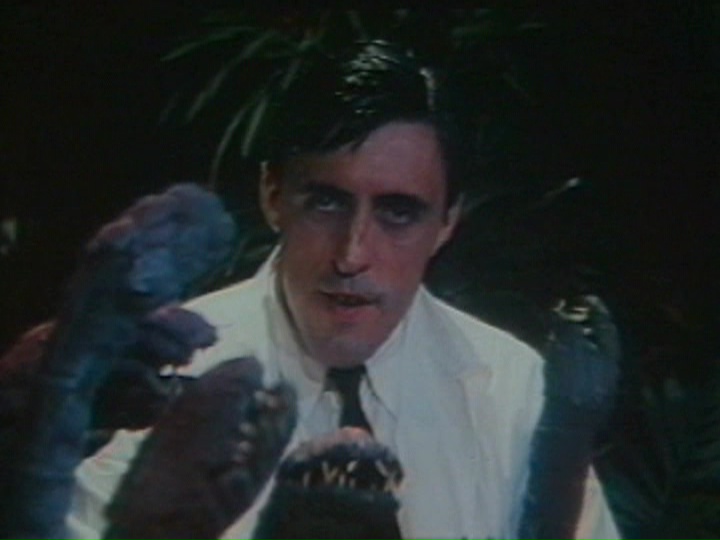 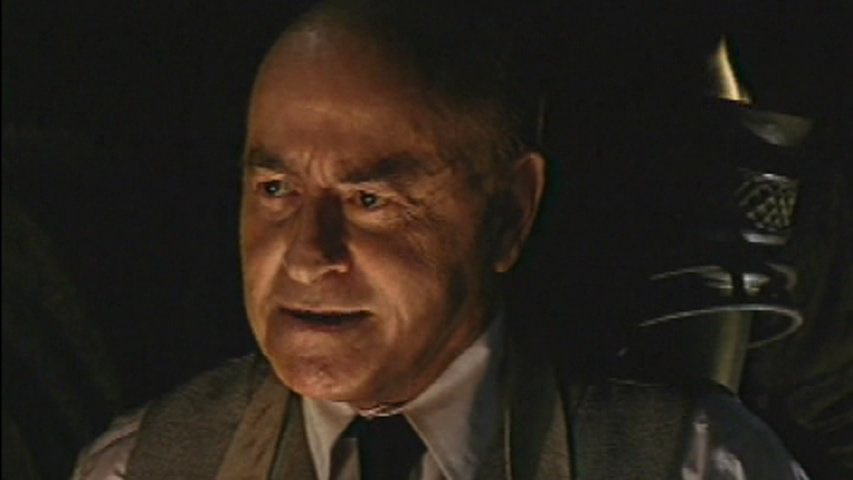 Finally on disc three you get A Marco de Terrir, a 77-minute compilation of Cardoso's short films (some in excerpts or condensations) hosted by the filmmaker himself. The 8mm shorts are mostly silent with music and the occasional voice over, albeit without any subtitles, so it's difficult to follow what's going on. However, you do get lots of surrealism, hand-crafted titles, and more graphic nudity than his main features, strip poker, more rampaging mummies, a very disturbing (real) chicken killing, a gory castration, lesbian experimentation, and his best-known early short, the kitschy Nosferatu in Brazil, which has to be seen to be believed. For the record, other titles included are Brasil Eu Doro Voce, Sururucucu O Almeida, Astros & Estrelas, Priataas do Sexo Voltam a Matar, Sexta-Feira 13, Branco Tu Es Meu, Onde Freud Nao Explica, O Padre E As Mocas, A Mumia Volta a Atacar, O Conde Gostou Da Coisa, Chuva de Brotos, Geracao Sem Lei, Sentenca de Deus, Horario Minerva, and Amor & Tara. Also included is the 52-minute O Sarcófago Macabro (2005), another lunatic (and unsubtitled) hodgepodge that starts during the Cold War (with stock news footage of Reagan and Gorbachev) before pelting you with a barrage of nightmares and monster encounters, including Nazi stock footage, clips from Cardoso's other films, and a guy in a Pharaoh outfit camping it up in the Oval Office. No idea what any of it means, but it's unmistakably Cardoso from start to finish. Also included are trailers for Secret of the Mummy and The Seven Vampires, plus appreciative liner notes by Sound on Sight's Justine Smith and a fold-out poster. The four main features are all taken from dated masters with burned-in English subtitles; in fact, the first three are the same versions issued from Something Weird (with some jittering in the picture at times), though it's nice to finally have them from masters without any tracking noise or other VHS anomalies as well as somewhat higher quality.