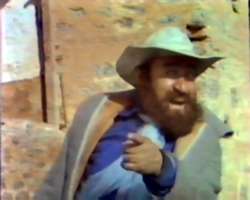 Back in the 1960s, Italian comic books (known as fumetti) were extremely popular throughout Europe and circulated widely either in multi-story collections or comic strips. Americans felt the impact only indirectly, however, mostly through film adaptations (like Barbarella and Danger: Diabolik) or the influence of these Italian artists on American ones throughout the 1970s with increasing levels of surrealism and more adult visual content.

Of course, the comic influence could also be flat-out silly, which brings us to the Italian comic series Il Comandente Mark, which was kicked off in 1966 by Pietro Sartoris. This goofy adventure strip told the continuing adventures of the titular Captain Swing, a Frenchman raised by Native Americans in the wilderness after his family is shipwrecked on the Northern American coast. When his adopted Indian father is captured and hanged by dastardly British Redcoats, he forms a group of North American rebels called Ontario's Wolves to fight back, along with the aid of his sidekicks, Sad Owl and Mister Bluff. Meanwhile he romances pretty Betty, a buxom lass able to see past his really bad Indian hairstyle. 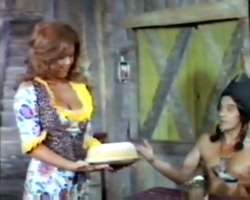 Never a company to put out more of the usual, Onar Films has veered into yet another undiscovered corner of Turkish cinema with this unheralded adaptation, Captain Swing the Fearless (Korkusuz Kaptan Swing), which sticks to the main comic story with a broad mixture of spaghetti western flavor and broad comedy. The film packs in lots of action and slapstick, with star Salih Güney giving Marty Feldman a run for his money in the camera mugging department as our hapless hero. It's more strange and hallucinatory than genuinely funny, but that tends to be the case when humor hops from one culture to the next. Oh, and the faux Morricone music is a pure blast from start to finish. And for you Turkish trivia fans, director Tunç Basaran is best known to video collectors as the man behind another mind-blowing 1971 film, Aysecik and the Bewitched Dwarfs in Dreamland, better known as The Turkish Wizard of Oz.

Onar's limited 500-piece pressing of this title is on par with their previous releases, which means the film itself is just one factor in an educational and fascinating package. The film itself looks rather soft, a problem inherent with the surviving video master, but colors are rich enough and the print is in decent shape. The Turkish dialogue can be played with optional English or Greek subtitles. You get text bios and filmographies for the director as well as stars Salih Güney and Ali Sen, while comic fans will squeal with the Greek comic release gallery which features a treasure trove of covers for many, many issues of the original comic in Greece. Also included is a movie gallery (some lobby cards and frame grabs), the original trailer, and bonus trailers for Casus Kiran 7 Canli Adam (one of the Spy Smasher films), the amazing-looking gothic Kadin Dusmani (in scope!), Cellat (the Turkish Death Wish), and Altin Cocuk, which looks like a Turkish stab at an Edgar Wallace film. Last but certainly not least is the second installment in Onar's "Turkish Fantastic Cinema" documentary, which features participants like Agah Ozguc, Yilmaz Atadeniz, and Giovanni Scognamillo talking about the golden age of Turksih films, with an emphasis here on westerns and outdoor adventure films including tons of wild-looking film clips. Easily worth every penny.